Hands up who loves Yotam Ottolenghi’s food. All of us, right? I mean, surely someone other than his mum has to be buying all those cookbooks. Rovi is just the place to get your fill of it. More spacious than Islington’s original Ottolenghi, warmer and buzzier than Soho’s Nopi. And – how very zeitgeisty – it serves small plates of food cooked mostly on coals, about two thirds of which also happen to be vegetarian.

As fruits of the earth go, it’s ravishing stuff. Two dishes in particular have stayed with me. One, a plate of charred onion halves and chunks of baby leeks. These came nestled against a dollop of salty, thick whipped feta with a crater pushed into its top. In this depression, lapping the edges as the plate was put down, was a thin green liquid: a spoonful of Ottolenghi’s celebrated ‘green gazpacho’. A verdant, zingy foil to the cooling, creamy cheese. It all came sprinkled with toasted pumpkin seeds and crisp morsels of fried sage. Complicated, yet not complicated. Just, well, lovely.

The other stunner was a jumble of roasted red and yellow baby tomatoes, glistening over a flat puddle of chilled yoghurt. Again, the whole dish had been lifted by myriad delicate spices, from cumin and lemon zest to garlic and thyme. It also came with a pair of thick, deliciously oily pieces of sourdough, their sides blackened by fire. You’ll chew, then let out one long, deep, exhale of contentment.

But here’s where I’m going to disappoint the vegetarians (sorry, vegetarians). The dazzler of the night – though admittedly, only just – was a dish of seafood and mammal bits on a stick. Specifically, morsels of baby squid alternating with slivers of lardo (pork back fat), all pushed on to a single skewer, before being held over flames. The flesh ends up beautifully smoky and sweet. This being Rovi, that wasn’t the end of it. There was also a smooth, sweetish red pepper drizzled loosely over the top, a heavy dollop of aioli sitting fatly to one side and a small fennel and herb salad for added va-va-voom.

There’s a presumptuously named snack section of the menu called With Drinks – rebels that we were, we ordered these without drinks and it was just fine. A moreish lobster crumpet was essentially two pieces of extremely posh sesame prawn toast, with a mind-blowingly good dip. A sweet, tangy, liquid kaleidoscope, it swung from the heat of Szechuan pepper and red chilli one moment, to a flash of ginger and mandarin the next, ending with the fragrance of spring onion and coriander. ‘Would you like to keep it?’ asked our waiter, as he leaned in to clear the plate, ‘lots of people do.’ Um, yes please. It was just a dip. But a dip of dreams.

On the whole, the food was terrific. There were a few blips, though. Like a desperately ordinary celeriac-stuffed pitta pocket. And a plate of wet polenta with grilled peppers that could act as the poster girl for a whole new wave of polenta-haters. But when a restaurant puts this amount of punchy ingredients in every dish and it mostly works, you have to be a bit forgiving. And the fact that the staff are charming is another bonus.

The look is a mish-mash of modernist styles and there’s a corner dedicated to flogging Mr O’s books (‘We’re drunk! Let’s buy cookbooks!’). But every seat, including the high-backed stools at the central bar, is designed for lingering, while the room was alive with the sound of laughter, jazz and cocktails being shaken. In this drab little part of Fitzrovia, Rovi is something quite special. 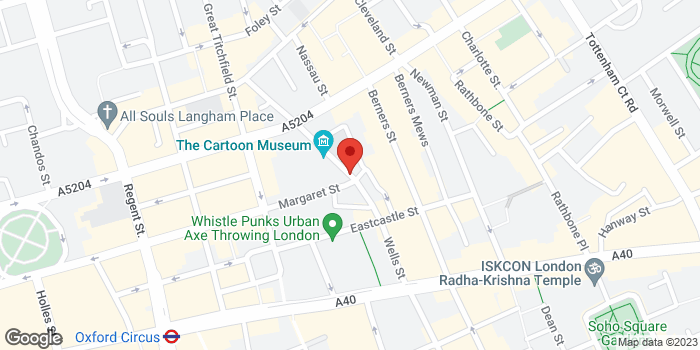 Price:
Dinner for two with drinks and service: around £120.