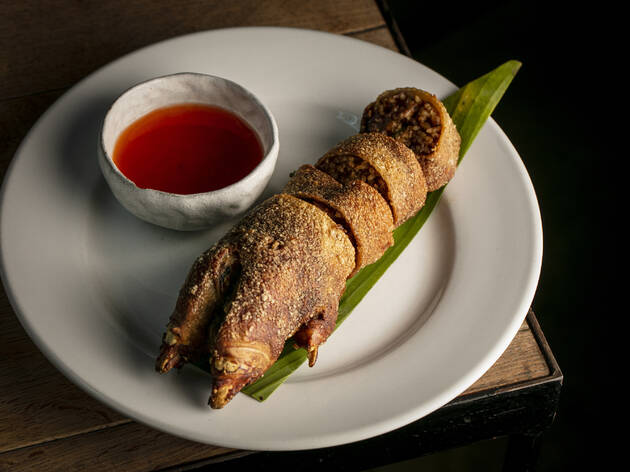 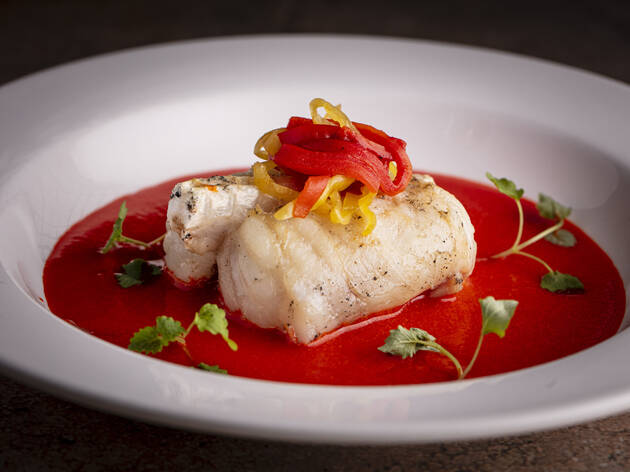 Vegetarians and squeamish people, look away now. The most delicious thing on the menu at Sarap Filipino Bistro, a new Filipino-inspired restaurant in Mayfair, is unapologetically meaty.

It’s a pork trotter, okay? Deal with it. The restaurant is Filipino chef Ferdinand ‘Budgie’ Montoya’s second London eatery – his first one is in Brixton and this new Heddon Street spot is a more fancy affair. As I walk in, my eye is drawn to a blackboard of recommendations. At the top, under ‘What Budgie’s eating’, it says: ‘Rellenong Crispy Pata, twice cooked adobo pork rice stuffed trotter.’ Who am I to argue? When it comes, the waiter encourages us to pick it up and get stuck in, telling us that all decorum has gone out the window as diners tuck in to this dish. He talks us through how they make it, too: the trotter is stuffed with pork and rice cooked in adobo sauce and then the whole thing is deep fried. The pork and rice it’s stuffed with is rich and glossy, while the outside was like really good crackling. It’s served with a tangy vinegary sauce to dip into, which cuts through the richness. It’s incredibly tasty.

It’s a pork trotter, okay? Deal with it.

The trotter is one of three small plates on the menu, alongside four large plates and three sides. If you went in a group, you could quite easily work your way through the entire lot. Me and my one dining companion had a pretty good go at it. The pork trotter was my favourite dish, but that’s not to say that the whole menu is a meat fest. On the small plates front, the smoked aubergine served with winter tomatoes and salted duck egg was seriously punchy, with deep smoky flavours.

From the large plates, the bistek – aged rump with calamansi (a Filipino citrus fruit) and soy jus – was the highlight. The richness of the meat was offset by the bright, citrusy flavours of the calamansi. Also good was the monkfish escabeche: grilled, meaty monkfish in a tangy red pepper sauce which properly tasted both sweet and sour. I’m not usually one to shout about a side of kale laing, because, well… you know, it’s kale. But Sarap Bistro’s version was cooked in coconut milk for three hours, making it really creamy and intense in flavour.

On the waiter’s advice, we got both desserts. The burnt cassava cheesecake was a twist on a basque cheesecake, made with cassava, cream cheese and coconut milk, but it was slightly rubbery. It was served with a macapuno cream, a Filipino variety of coconut, which did the heavy lifting and definitely brought the whole dish together. The other dessert was a suman – banana leaf-steamed sweet coconut glutinous rice with a coconut caramel. As a staunch hater of rice pudding, I was dubious. But after my first tentative spoonful, I found myself going back for more – the rich caramel was just the right side of bitterness.

The flavours here were all great. My one (small) gripe was that the mains were slightly let down by not being quite hot enough when they arrived at our table. Hopefully that was just a teething problem, as my visit was during the restaurant’s opening week. It’s clear that a lot of love has gone into the menu and the staff were all super attentive, taking time to explain ingredients that people might not be familiar with. They were also very happy to talk about cooking techniques, if, like me, you want to know how they make that pork trotter taste so damn good. I’ll be back for another plate of it – and this time I won’t be sharing.

The vibe An unstuffy atmosphere in an often stuffy part of town.

The food Punchy flavours that rarely miss the mark.

The drink Try one of the cocktails made with Don Papa – a delicious aged Filipino rum.

Time Out tip Chat to the staff – they’re super friendly and knowledgeable about the menu.