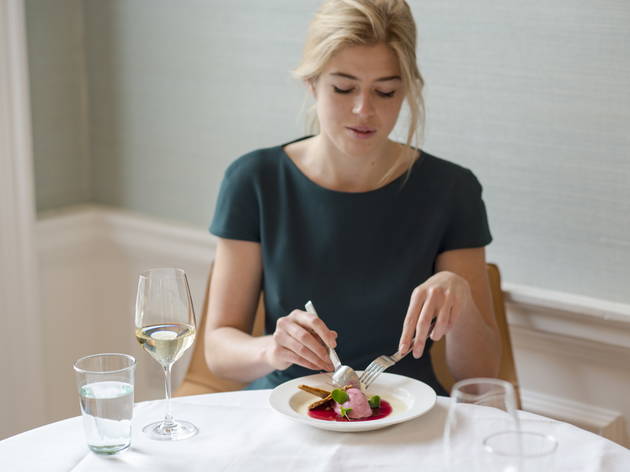 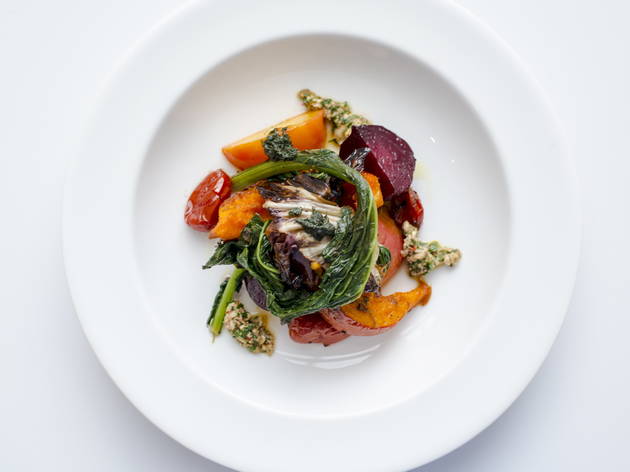 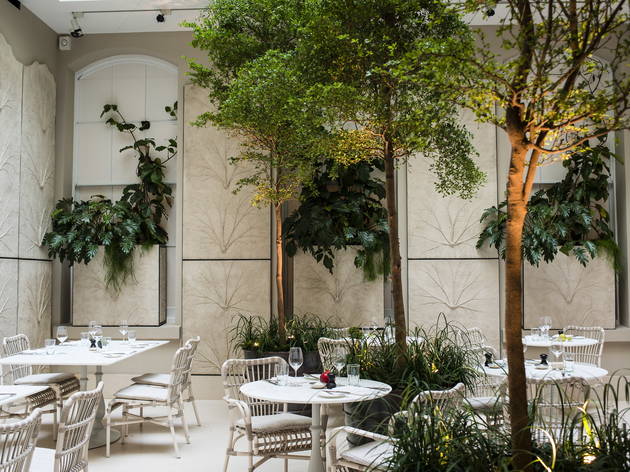 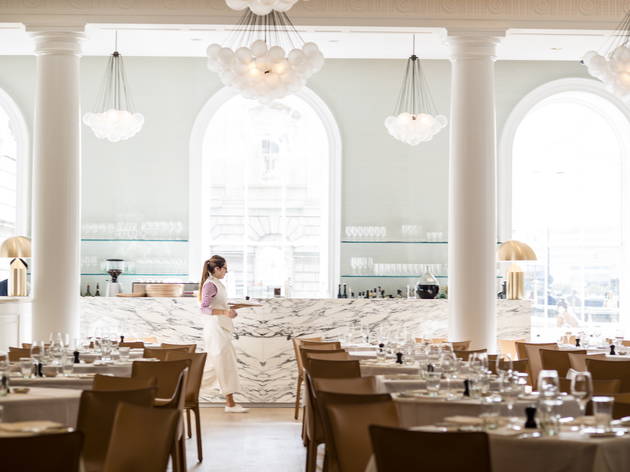 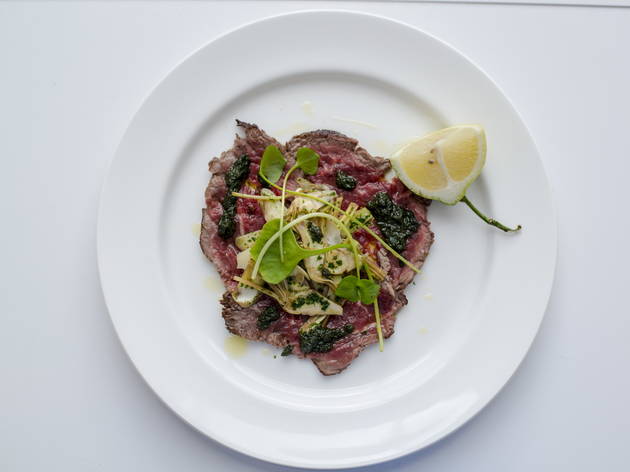 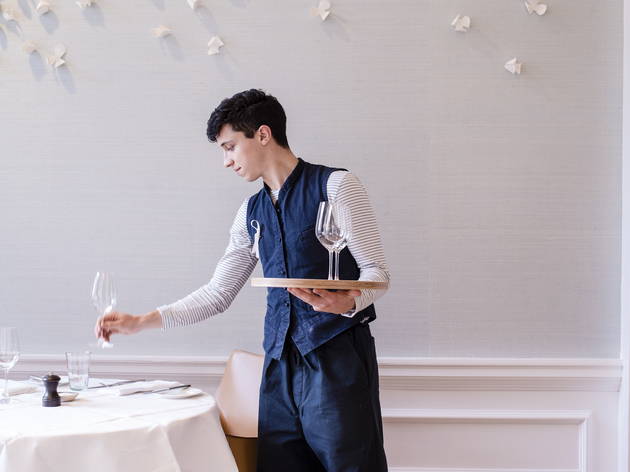 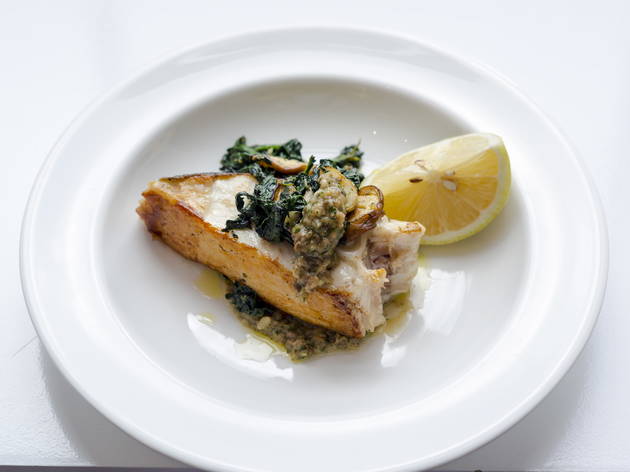 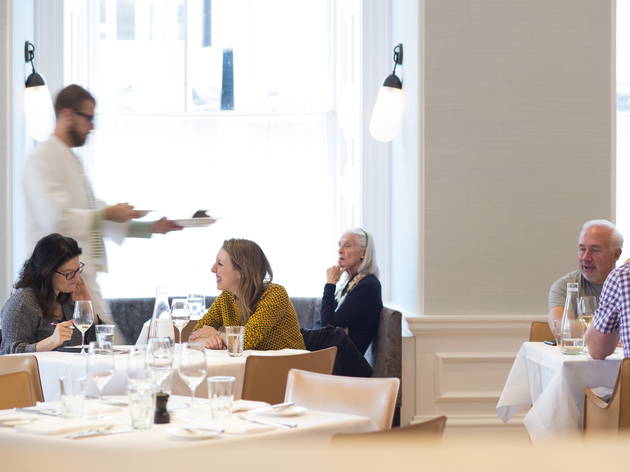 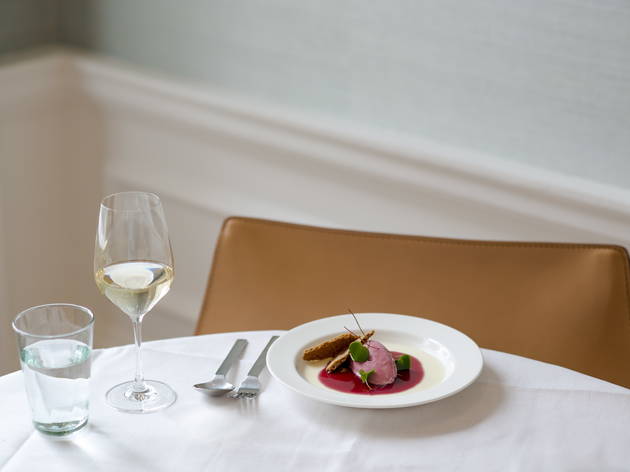 What kind of meal out can you expect for £160 for two in London? A glamorous or sumptuous setting, service smoother than a hand-buffed glass, and cooking that’s exemplary of its type.

For location, Spring’s off to a good start. Somerset House is an eighteenth-century building on the Strand, once home of the British Admiralty, then the Inland Revenue HQ. The stunning courtyard is often used as a film set in period dramas. Spring doesn’t have much of a view, as a  white marble counter blocks the window. But the huge, high-ceilinged room is pretty in a pastel-hued, funked-up Edwardian way.

I arrived early and was seated in the ‘bar’ – really a corridor, where the staff swish past in uniforms that resemble surgical gowns. The effect is like waiting outside a  ward in ‘The English Patient’, but with a stiff drink instead of morphine to calm the nerves.

Chef Skye Gyngell previously worked at Petersham Nurseries Café, which at the time held a Michelin star. There is no better example of how a gorgeous setting influences enjoyment of a meal. Petersham Nurseries is an idyll; it successfully blends the romantic notion of the Tuscan garden with antique Indian artefacts. In this setting, Skye Gyngell’s simple, Italian-inspired cooking hit the spot. But taken from these bucolic environs and put into the formality of a West End dining room, filled with power brokers who smell of money, not pretty posies, the rosy-cheeked country glow fades away. Rapacious pricing doesn’t help the nagging feeling that you’re about to be stung, studying a menu where most starters cost  £10-£15, and main courses £25-£30.

Puntarelle is a slightly bitter chicory that’s common in Rome but seldom seen here. Here the dandelion-like leaves are served with a variant on black olive tapenade, mint and goat’s curd cheese. It’s the River Café fantasy of cucina povera, at prices only the rich can afford. Carpaccio was better, the beef a little rough-cut, but well-flavoured and topped with shreds of raw artichoke and pecorino flakes.

Our main course choices would make excellent Fulham dinner party dishes: a fillet of turbot perfectly cooked to the centre, served with fresh porcini mushrooms, spinach for colour and contrast, and breadcrumbs mopping up rich bone marrow. Any home cook would be delighted to create this; here it costs £32.

The cheapest main course was the sole vegetarian option of roasted onion squash with green lentils, tomato, beetroot, leaves of cime de rapa (an Italian brassica) and an agresto dressing (a nutty sauce containing sour grape juice). Pudding was a simple slice of chocolate cake containing candied chestnuts and pear, with a scoop of crème fraîche on the side. It's worth noting that while the dishes look beautiful in the carefully-styled pictures of our photo shoot (above), the versions served during our anonymous review meal looked less picturesque and more hastily assembled.

Yet there’s much to commend Spring. It’s good to see fine Italian ingredients and the cuisine’s sometimes sour and bitter flavours being used, not excised. And the sommelier did an impressive job of matching wines by the glass to challenging flavours. But is it worth paying haute cuisine prices for cooking that’s essentially rustic, so reliant on assembly of ingredients? The captains of industry seemed to think so, judging by the cajoling for a table that we witnessed as we were leaving. Witnessing a self-important and powerful man used to getting his way being told ‘no’ by the young reservations clerk was the most heartwarming moment of our visit.

PS since the above review visit a set lunch menu has been added, from £25.50 for two courses, which makes Spring considerably more affordable.