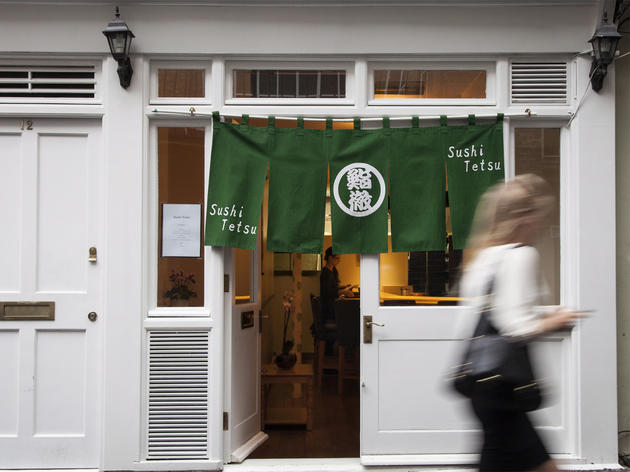 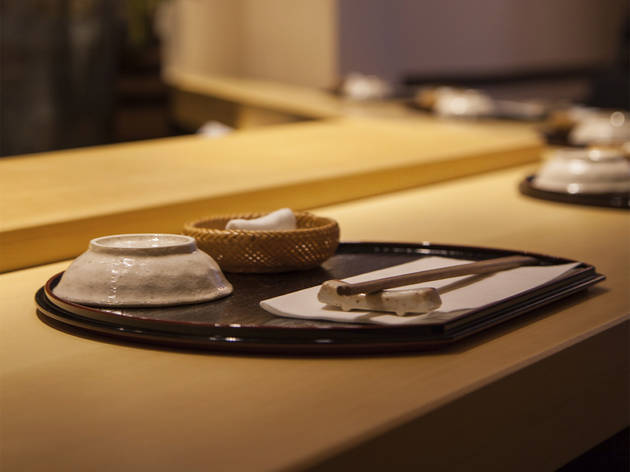 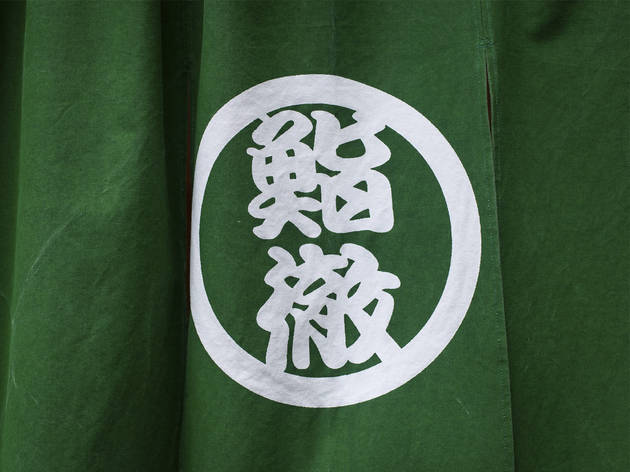 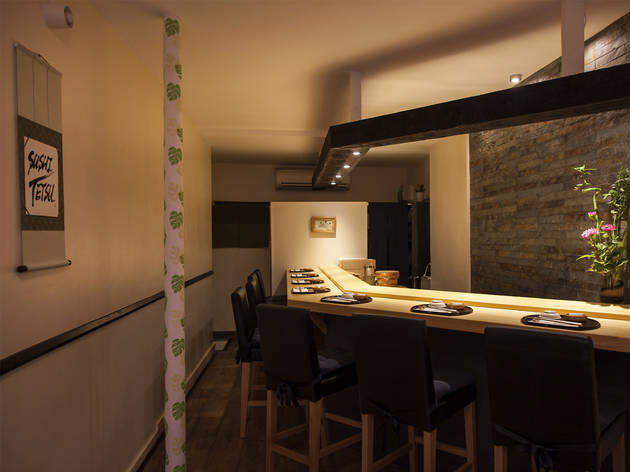 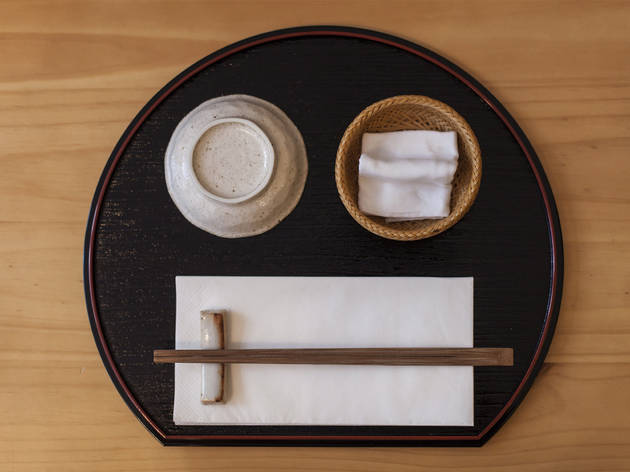 There are half a dozen hotly-competed-for seats in this tiny Clerkenwell sushi-paradise, and you'll pay for the privilege of sitting there - but it's worth it.

Getting a table at this Clerkenwell sushi-ya has been a challenge ever since it opened in summer 2012. Understandably so, as there are only about half a dozen seats and they’re some of the hottest in London right now. In aesthetics and quality, Sushi Tetsu wouldn’t be out of place in a smart Tokyo suburb.

Chef Toru Takahashi (ex-Nobu) is centre-stage behind the imposing pale wood counter, where he carefully compacts glistening grains of rice into plump pellets before topping them with shimmering slivers of fish. Each nigiri is inspected with a contemplative look and finished with a dab of soy, sprinkling of sea salt or lick of flame from a blowtorch before being placed on a glossy bamboo leaf in front of the diner. Each piece arrives individually to be eaten by hand.

For the full experience, go for the omakase menu, and let the chef choose what’s freshest that day. Just say when you’ve had enough – be warned though, the bill can add up.

Highlights of a recent visit included the best boiled prawn nigiri we’ve encountered; blanched on the outside, then split down the middle and blowtorched, it was sweet, smoky and barely cooked through. You need to book well in advance – the website explains the rather complicated procedure – but it’s a treat worth waiting for.

After 100+ plus calls, and using 2 phones to call to get through. I started questioning my existence and if this place really worth the dedication it requires before I have even entered. I mean nothing can be worth this much effort right? I kept at it and boy am I glad I did. With spaces for only 7 people at the restaurant, I can understand why this hidden Japanese food heaven is so hard to get a reservation for. This is ran by husband and wife duo, who seem like they are interested in delivering great Japanese food to the people of London, without the commercial menu mix up. Keeping it simple is always the best.

So when finally the day came having read the great reviews, we were very excited. Husband performing his sushi magic behind the counter with hand making each sushi in front of each customer, while wife is chatting and answering all questions to the guests in the intimate environment, it all feels very much like an VIP experience from the time you walk in till the end. Most definitely the best sushi I have experienced in London so far, nothing else like it exists. Although on the more expensive side if you love sushi, this is worth a visit. Highly recommend, just waiting for the next occasion so I am able to treat myself.

A real treat, everything is executed in true Japanese style from the decor to the politeness of the staff. That explains why it's difficult to get a booking!

If you think you like sushi this will be a revelation. It brought a fellow dinner to tears.

Eating there is like going to a live art performance where you get eat the star of the show! Everything tasted absolutely amazing and is presented beautifully.

I can't fault any part of the experience and only wish I had enough spare money to be able to eat there more often. The difficulty in booking a seat may mean I won't go broke.

My brother sent me and my girlfriend here for my birthday - and honestly it was one of the most memorable meals I've had in my life! We had the omakase menu for 2.5 hours, and were 2 of 7 guests in the restaurant. From the moment we stepped in the door and the waiters took our coats/bags and sat us down, to when we left and they'd laid out our bags and coats neatly for us to put on, Sushi Tetsu was just incredible.

Sitting there watching the chef cook and cut everything and hand it to you was brilliant, and he's happy to discuss the why/how of what he's doing along the whole way. Follow their recommendations and you cannot go wrong!

The only negative I would say is that because the restaurant is only for 7 people - if one of the other guests is particularly loud/drunk it can negatively affect the rest of the guests. Ultimately though, I would happily pay the full value of the menu in order to eat here again, as the food and experience is just incredible.

And for those wondering, the other guests at the restaurant all agreed Sushi Tetsu was better than Araki!

I had dinner at Sushi Tetsu last week and it was hands down my best sushi experience in London. There are only seven seats, so the booking process (phone line open twice a month) can be quite a crazy feat but once you've made it in, you won't be let down.

I opted for the sushi & sashimi omakase menu, which means the chef puts together the menu for you based on what fish is freshest on the day. I had a selection of sushi roles and sashimi, a hand roll, some edamame and a sweet omelette to finish the meal. The sushi was exquisite, not much fuss, just amazing quality and flavours combined to make every single piece perfection. Every piece is made and served by the chef right before you eat it by hand, which makes the whole procedure last around 2,5 hours. Due to the size of the restaurant, the atmosphere is very intimate and we had a nice chat with the chef and a lovely lady who I am guessing is his wife. I will definitely go back as soon as I get the chance again.

As the owners advised us when leaving: "Booking is difficult, but with anything in life, you've just got to keep trying!"

Very intimate restaurant - slightly intense dining experience because there are so few people. Beautiful, delicate and delectable fish no doubt, but not sure how good value for money it is to be honest. Very different experience I agree, and watching Chef Toru's hands as he meticulously prepares each sushi and sashimi piece with incredible care, is mesmerising and awesome in itself.

Just a fantastic restaurant - a real labour of love for its owner, and one that gives a quite different experience from 99% of the sushi in London.