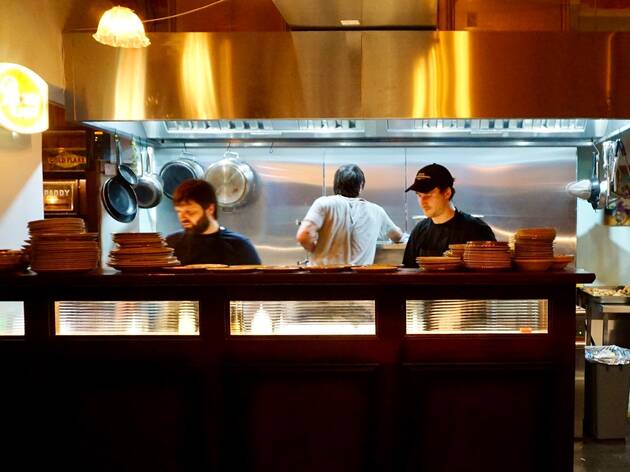 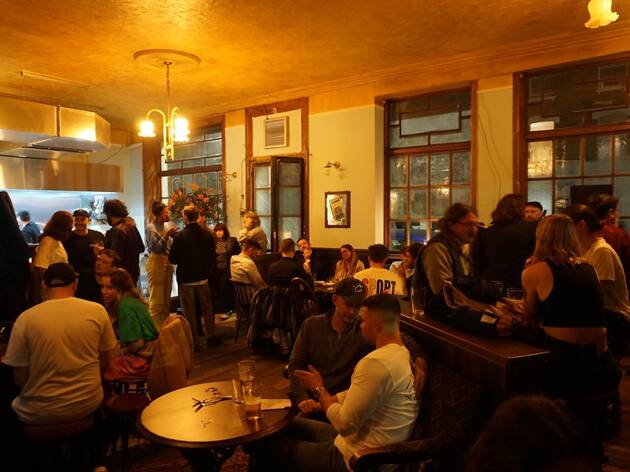 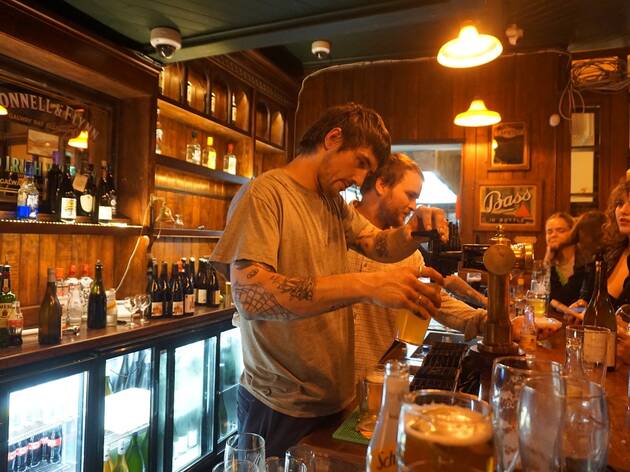 The last time I went to the space that is now The Plimsoll, it was an Irish pub with an old-man vibe called The Auld Triangle. In some ways, it hasn’t changed much. The wallpaper is still peeling off the ceiling a bit, the seating is your classic pub stools and it has Guiness on tap. But that’s not a bad thing: it feels like a proper London boozer. What is obviously different is the shiny new kitchen you see when you walk in the door. I’m not even sure if the pub did food before, but if it did, I can guarantee that what’s on the menu now is in a totally different league.

The guys responsible for this kitchen glow-up are Ed McIlroy and Jamie Allan, the chef duo known as Four Legs, who previously had a long-running residency at The Compton Arms. When that came to an end, they decided to take the plunge and open their own pub. The spot they’ve taken over is a few minutes’ walk from Finsbury Park station on the corner of St Thomas’s and Plimsoll Roads, hence the name.

Their reputation in the kitchen has followed them to the new place – I could only get a reservation at 6.15pm on a Monday night, and even then, the place was absolutely buzzing. The menu is a mix of snacks, small plates and bigger plates. It’s one of those where your brain goes: ‘yep, yep, yep’ as you scan it. I could have happily eaten everything on the menu.

A word of advice: this is not the place for you if you want to load up on vegetables – our waiter commented: ‘We’re quite a carnivorous restaurant…’ My total number of dietary requirements come in at a big fat zero so it wasn’t a problem for me, but if you’re veggie or vegan, you might struggle. With that in mind, our waiter advised ordering a plate of greens (the only one on the menu) – bitter leaf with shallots and comté – to take the meaty edge off, I guess. It was my kind of salad: a plate piled high with leaves that actually tasted like something, covered in a very generous shaving of cheese. But, as everyone knows, you don’t win friends with salad, so now to the real stars.

Every dish we tried was a banger. I mean, one of the snacks was chipolatas with dijonnaise – simple but very effective aka very delicious. The battered octopus was proper chunks of tentacle and none of those scrappy bits you often get, deep-fried in a crispy, light batter and served with a tangy dip that was heavy on the fish sauce – a proper winning combination. A lip-smacking broth with generous pieces of herby sausage and juicy, plump prawns was fragrant and soothing. And sure, you can’t ever really go wrong with fried carbs and a garlicky dip, but the crunchy, salty potatoes with a creamy, rich aioli were pretty much perfection.

But all of this was a warm-up to the big one. The famed Four Legs Dexter cheeseburger – the dish they slung together on the fly at The Compton Arms, which has since developed a cult following. It was at this point in the evening that things took a turn.

It’s like a supercharged Big Mac: no lettuce, no bullshit, just a juicy patty

We’d been there for about an hour and 15 minutes and the dishes had generally been coming out one by one. If I was being critical, I’d say the service was on the slow side but they were busy and I actually quite enjoyed the pace, rather than having our cosy table piled high with everything at once. But then the waitress came over and uttered those doom-laden, vibe-killer words: ‘We need the table back in 15 minutes.’

I wouldn’t have minded, except that a) no one told us how long we had the table for and b) the burger I was eagerly awaiting hadn’t arrived yet. When it did turn up, about five minutes later, it was glorious. It’s like a supercharged Big Mac: no lettuce, no bullshit, just a juicy patty with gherkins, onions, cheese and burger sauce, all in a brioche bun that, crucially, doesn’t fall apart as you eat it. It’s everything you want from a burger. But because of the sudden time pressure, I had to inhale it, like I was chomping down a McDonald’s before rushing for a train.

Having wolfed the burger, I checked my watch. There was about seven minutes to go, so I tried to squeeze in a dessert order. I’d been eyeing up the chocolate mousse with walnut brittle, although if I’m honest, I was going to order the lemon cake with crème fraîche too, because I’m nothing if not thorough. But my order was rejected: ‘I’m afraid you don’t have time for dessert’. Oh.

Feeling dejected, I asked the staff what had happened and why we were being booted off our table before dessert. They admitted that they’d messed up: they should have told us about the time limit and that perhaps service was slower than it should have been. They suggested we pay the bill, move to the bar bit of the pub and find somewhere to perch and have dessert there. But the surprisingly busy Monday night meant there was nowhere for us to go. So we left, feeling a bit hard done by.

There’s no doubt that it’s a tricky time for hospitality and the pub is relatively new so, understandably, it’s still finding its groove. But I did wonder if the next people couldn’t have just got a drink, read the menu and waited five or ten minutes, rather than turfing out some very willing punters who just wanted to eat a (probably) delectable chocolate mousse.

All in all, the food was excellent, top quality stuff. The service was less good. Unfortunately, it meant the meal ended on a bad note. I genuinely hope it was a one-off and that no one else has their dessert dreams crushed. And maybe, when enough time has passed and my wounds have healed, I’ll return and make it all the way to pudding. I’m sure it will have been worth the wait. And hey, at least I had some emergency Ben & Jerry’s in the freezer and made it home in time to watch ‘Succession’. Swings and roundabouts and all that.

The vibe An old-fashioned boozer with really, really good food.

The food Well-executed and creative dishes that don’t always take themselves too seriously – shout out to the chipolatas and dijonnaise!

The drink The wine list is pretty short and simple, plus there’s a selection of aperitifs if you want to kick things off with a negroni. Always a strong start to a meal, if you ask me.

Time Out tip You’ve got to get the cheeseburger, but order one to share (or more if there are more than two of you, I’m not a monster), so you can try more stuff.