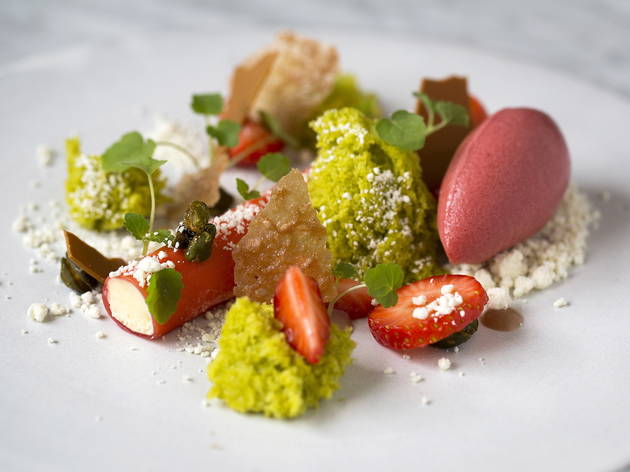 Could Typing Room be the next big thing? It has all the right ingredients. The room – once using for mayoral correspondence, now part of Bethnal Green’s Town Hall Hotel – seems to be a ‘lucky site’. The previous restaurant here, Viajante, was run by Nuno Mendes, who built his reputation in this same kitchen before leaving to head up Chiltern Firehouse in the West End, a place more chock-full of A-listers than a botox clinic’s address book.

The new star backer is chef-restaurateur Jason Atherton, current toast of the capital’s dining scene (his hits include Pollen Street Social, Social Eating House and Little Social). If you haven’t heard of the new head chef Lee Westcott, that’s because after earning his stripes at Tom Aikens in Chelsea, he went off to do stints at some of the world’s top restaurants, including Per Se in New York and Noma in Copenhagen before ending up in Hong Kong, where he ran a couple of Atherton’s joints. That’s before he got ‘the call’. So now he’s back, with a menu of his own creation. But this is no ‘Bethnal Green Social’: Atherton clearly has faith in him.

Fortunately, that trust has been rewarded. There are plenty of ‘modernist’ food trends on his plates, such as all-the-rage New Nordic: a bit of dehydration here, some smoking there, plus more sprigs, twigs and petals than you can, umm, shake a stick at. This approach is no longer radical, but it’s high fashion food.

Dishes are intricate and exquisite; it almost seems a pity to eat them. A silky ‘patty’ of shaved raw beef was beautifully offset by the crunch of panko breadcrumbs and morsels of sweet smoked beetroot. A pigeon arrived entombed in a wooden box, tendrils of smoke curling up from the edges. Thankfully, the contents hadn’t been cremated, just gently smoked on a fragrant ‘nest’ of pine needles. Crisp-skinned chunks with tender, ruby-red middles were then carved and teamed with an intense jus, chewy barley and chunks of mellow, salt-baked celeriac.

Service was warm and professional. When we queried the just-cookedness of a veal sweetbread in an otherwise unimpeachable dish, it was quickly struck from our bill. No drama.

The setting, too, is quietly stylish: teal walls, muted greys, touches of elegant white marble. This is the best restaurant in east London right now. Whether or not it can conquer the capital from this postcode remains to be seen.