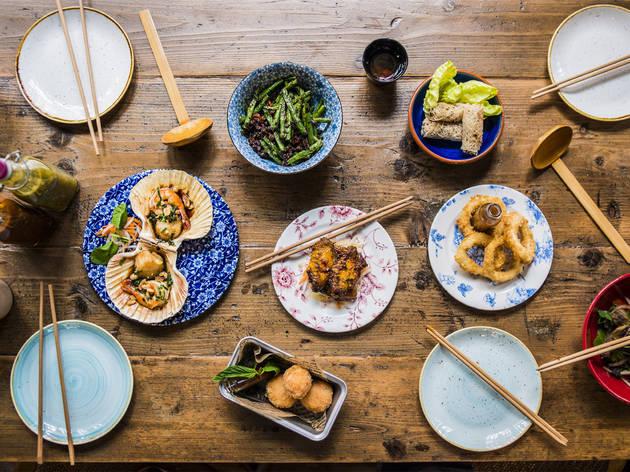 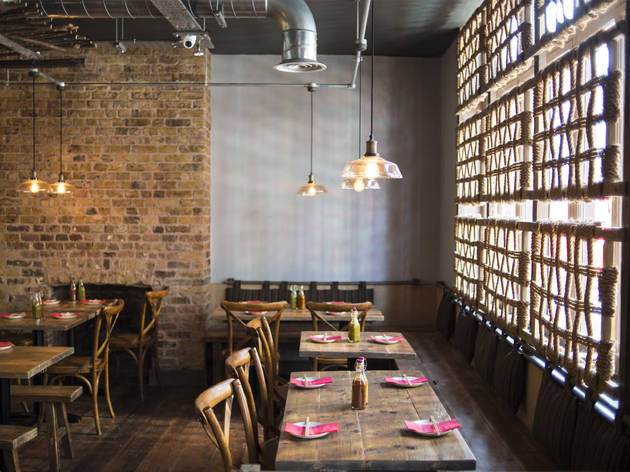 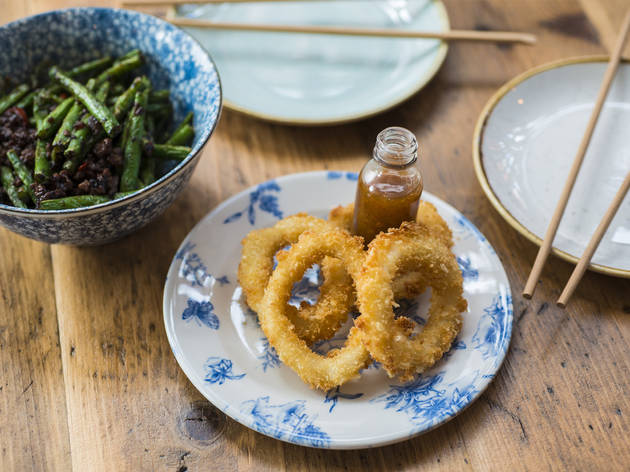 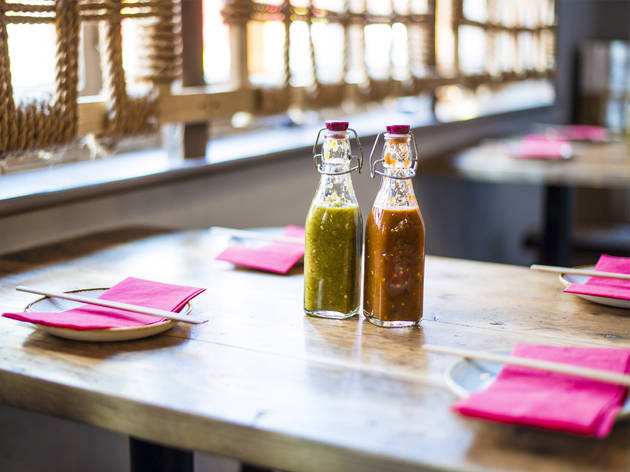 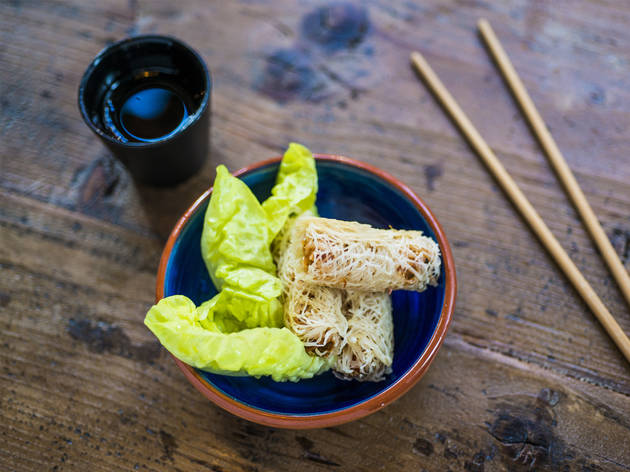 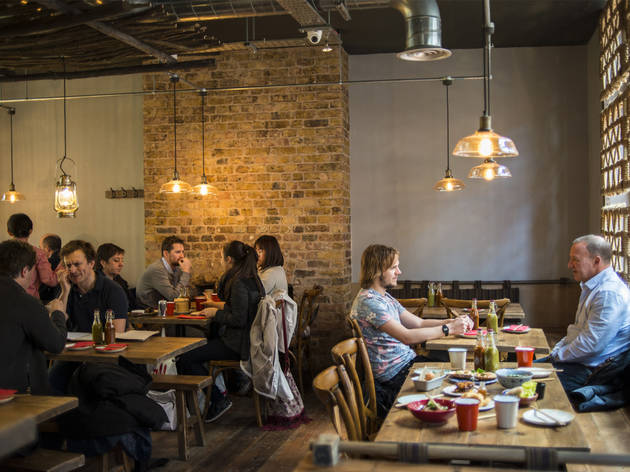 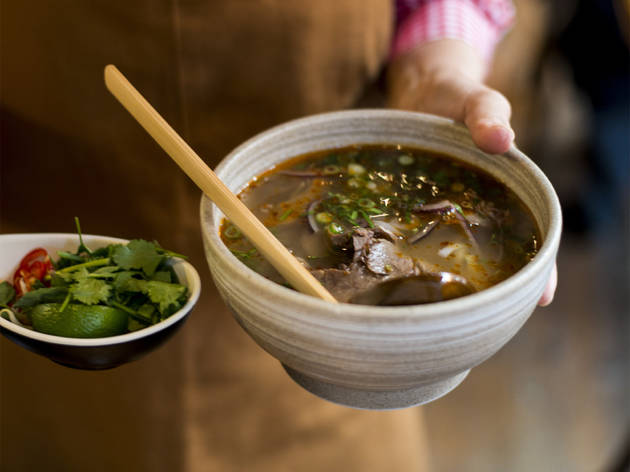 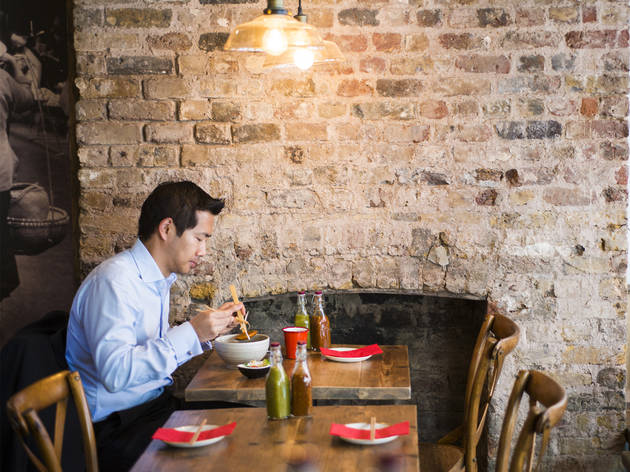 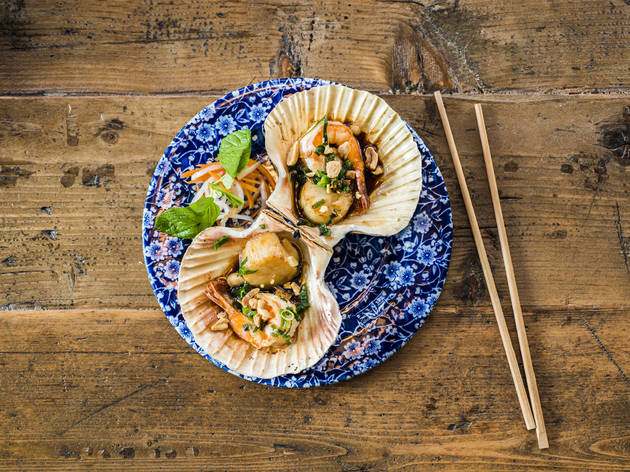 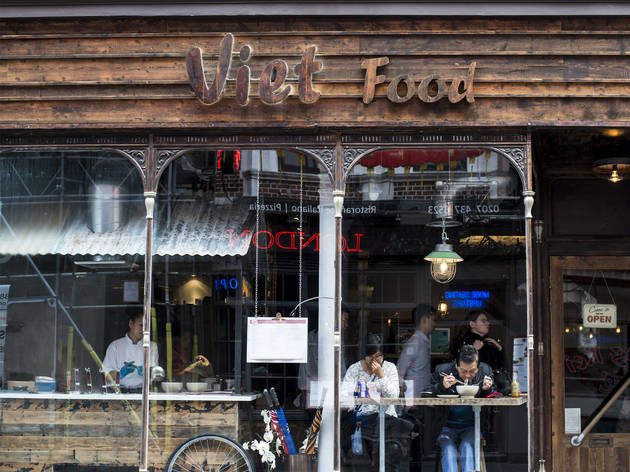 Ding ding ding! Red flag alert. We’d just walked the length of Wardour Street (sans Google Maps, a rookie error) to find this new Vietnamese restaurant not in the Soho bit, as we assumed, but in the below-Shaftesbury Ave bit. This could only mean one thing: tourists. Swarms of them, all taking selfies, grelfies and good-old-fashioned giant-camera travel snaps.

That’s right, people: Viet Food is just outside the entrance to Chinatown, next to the Play 2 Win arcade and across from famed-for-shouty-waiters Wong Kei. Then there’s the name: Viet Food. Not exactly inspiring, is it?

But don’t let these superficial no-nos put you off, because this just happens to be one of the hippest new restaurants in the capital. A creation of the people behind Dozo sushi in Soho, it’s ultra-stylish, mixing traditional south-east Asian elements (interlaced woods and corrugated iron over the soup station’s ‘roof’) with industrial chic: bare walls, scuffed floorboards, exposed girders, soundtrack of throbbing dance music. Even the loos are warehouse cool.

But before you say it, there’s plenty of substance too. As one of the waiters put it, with what would appear like arrogance if it weren’t basically true, ‘Everything here is good.’ Ex-Hakkasan head chef Jeff Tan has put together a pick ’n’ mix of stellar Vietnamese street food, and of the seven dishes we sampled, only one (an overcooked but otherwise delicious grilled scallop) was a letdown.

The rest combined tastes and textures with great flair, such as the intense flavours of a dish of stir-fried French beans with tender morsels of sticky beef and alternating bursts of chilli, garlic, and shrimp-paste saltiness. Or the faintly sweet coconut crunch of deep-fried calamari with a sweet chilli dressing, which came delivered in a teeny test tube, because it’s that kind of place.

We’d have liked to try one of the eight kinds of pho, but first we’d have had to die, be reincarnated as cows, and come back with four empty stomachs. Each. Because aside from slightly too-nonchalant service, that’s the main disappointment: too many dishes and not enough room in your belly to put them all. Only one thing for it then. Go back next week and do battle with the snap-snapping out-of-towners once more.