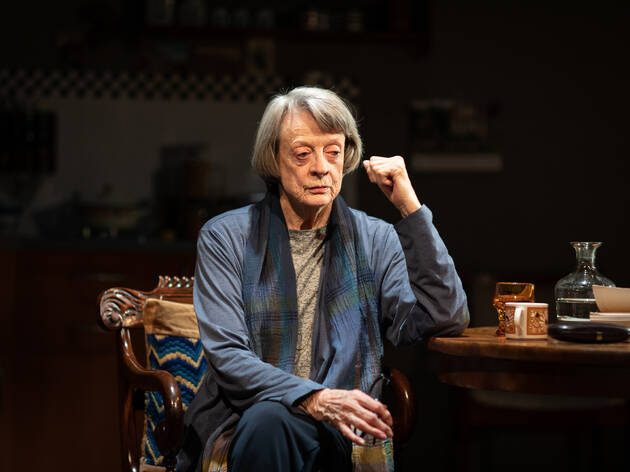 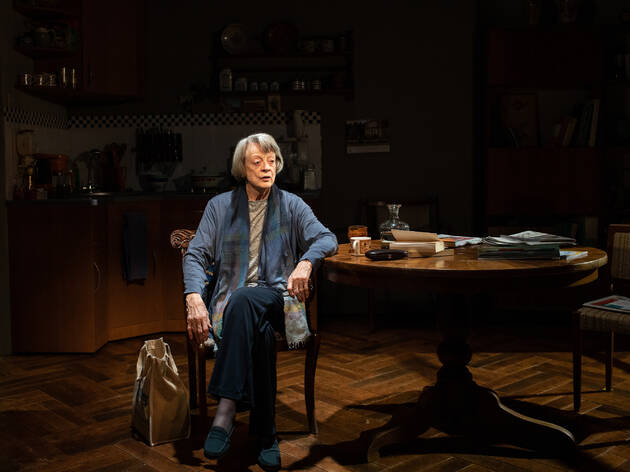 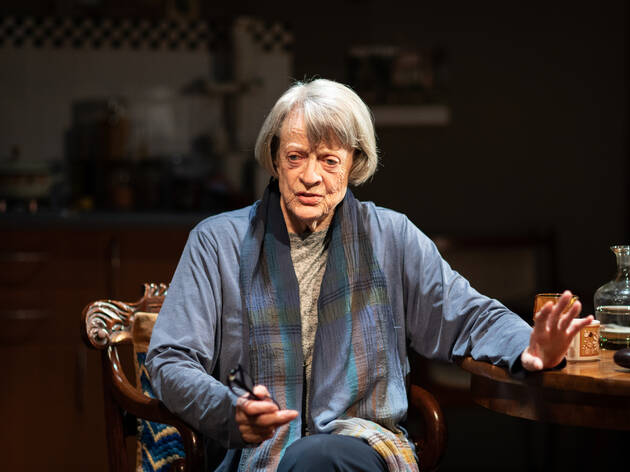 Twelve years after she retired from the stage, Dame Maggie Smith, 84, has returned.

But anyone expecting a valedictory yee-haw of a performance – a last big flexing of the dramatic muscles to one-up peers like Glenda Jackson or Ian McKellen, still doing Shakespeare in their eighties – will be taken aback. This is something very different.

‘A German Life’ is a monologue translated and edited by Christopher Hampton from the videotaped testimony of Brunhilde Pomsel. Personal secretary to Joseph Goebbels, Pomsel only spoke about her experiences at the end of her very long life – she died aged 106 in January 2017. Jonathan Kent’s hyper-naturalistic production feels less like a contrived work of drama, more like watching Pomsel’s testimony in some sort of unnaturally vivid translation.

For an hour and 40 minutes, Smith sits in a chair in Anna Fleischle’s neat Munich apartment set, and simply talks to us, sharing Pomsel’s memories in pointedly hesitant fashion.

Is it a brilliant performance? Yes: it is a totally brilliant performance, just don’t expect fireworks. Smith’s Pomsel – an altogether less imposing personality than Smith herself – is a woman who seems to constantly be wrestling with something: a struggle to remember? Guilt? Guilt at her lack of guilt? Horror at what previously uninterrogated memories of the Third Reich really signified? Often she stumbles over words or slightly loses her thread: maybe some of this is Smith stalling for time slightly, or perhaps each hesitation or repetition is immaculately scripted. Either way the effect is the same – low-key magic, and a remarkable performance.

Smith’s Pomsel haltingly tells the story of her life in Nazi Germany, and often stresses its harmless banality or how little she knew about the bigger picture. But it’s the little slips of information, the minor corrections, the small contradictions that tell. She says the Jews weren’t persecuted in the early Nazi days, when she was personally happy, then remembers that they were; she says she didn’t know about the concentration camps but then qualifies herself: she did, but – and despite the number of people she knew who disappeared into them – she didn’t know what happened in them.

Is Pomsel a villain or an antihero? The key point about both play and performance is that she is neither. ‘The banality of evil’ is an overused phrase, and perhaps not one that exactly applies here: it is perhaps more accurate to say that in ‘A German Life’ evil is something vast and disorientating, something nation-sized, so big that it is difficult for a single individual to perceive it with clarity. And yes, denial is a big part of it. Despite her many Jewish friends, Pomsel’s lack of real anger at the persecution of the Jews somewhat damns her. But ultimately she is alarmingly relatable: her lack of outrage counts against her, but the world isn’t made up of heroic people who take a stand: she was just a woman who tried to keep her head down until Hitler was gone. Evil doesn’t so much happen because good people don’t oppose it, as because regular people don’t fully comprehend it, and just want to get on with their lives.

Smith has done no interviews to support ‘A German Life’ and has given no indication as to what her motivation for returning to theatre might be. But it feels like a very specific project: it’s hard to imagine it was this or something else.

To say there are contemporary political situations the play might relate to is an understatement, but ‘A German Life’ doesn’t strain desperately for relevance because it doesn’t need to. The forces of rightwing populism are on the march again and the facts are eloquent enough.

Maggie Smith has used what is surely her final stage role to try and tell us something. We should listen.

‘A German Life’ is sold out but £15 day-seats are available in person from 10am each day of performance. There are also £20 lottery tickets available via the TodayTix app.