With Andrew Lloyd Webber’s shows making the leap to online, we decided to rank the maestro’s musicals

With the news that Andrew Lloyd Webber’s much-loved musicals will be streaming to a global audience, what better time to rank his shows? From tonight, a different play by the composer will be streaming for free each week on dedicated YouTube channel The Show Must Go On!. Forthcoming smash-hits will include ‘Cats’ and ‘The Phantom of the Opera’. Read on to see where they stand in the artist’s back catalogue and which shows you really have to look out for over on YouTube in the coming weeks.

Trains. Singing. On rollerskates. Why? Sure, the standard response is, ‘It’s for kids.’ But honestly, our nation’s youth have enough on their plates without having to worry about the love lives of a bunch of frisky steam engines. It runs permanently in a custom-built arena in a German city called Bochum: they can keep it.

Even at their worst, the truth is Lloyd Webber’s scores are rarely the main problem with his musicals, but his choice of lyricists not named ‘Tim Rice’ is often catastrophic. Teaming up with Ben Elton to write a very earnest original story about Ireland during The Troubles is possibly as bad an idea as either of them have ever had, and they have both had some truly terrible ideas.

15. Whistle Down the Wind

On paper, the pairing of Lloyd Webber and MeatLoaf’s songwriter Jim Steinman sounded agreeably bombastic. In reality, this adaptation of the classic Brit flick – torturously transposed to the American South – was ponderous and dull.

Maybe there is a good musical to be made from the scandal of the eponymous society osteopath, destroyed by the Profumo Affair. But this first priapic, then self-righteous romp through the Swinging Sixties isn’t it.

No, it’s not as bad as everybody says it was. Yes, it’s still fairly bad. This sequel to ‘The Phantom of the Opera’ looked good but lacked its predecessor’s campy panache or killer tunes.

A bit of a weird one: this 2011 musical marked Lloyd Webber’s first project with Tim Rice in aeons – yay! But it was also explicitly an adaptation of the iconic 1939 film, retaining all of its original songs, and much of the script – hmm! The result was solid enough, but essentially underwhelming.

This hour-long song cycle is about as understated as Lloyd Webber gets. In a succession of gorgeously subtle pop ballads, a young woman stands alone on stage and sings about getting her heart broken by the cheating cads of New York. Alas, Don Black’s lyrics don’t show the sharpest of insights into the female psyche.

This 2004 crack at the West End is inspired by a pacy Wilkie Collins novel. It’s an excuse for Lloyd Webber to indulge his taste for Victorian frills, with mixed results: its female characters are feminist but a bit drippy, the music swings between enjoyable pastiche and insipid pastiche. Still, great frocks.

Look, the tunes in ‘School of Rock’ are very decent, and you would have to be a monster not to adore the axe-toting child performers. But its smug evangelism for baby boomer rock is painful.

This show is undeniably icky: the first half’s très Francais incestuous grapplings give way to a second half where a man falls in love with a literal baby, and struggles to wait until she’s 15 (!?) to woo her. But amid the befuddlement, the show’s emotive piano-led score has moments of real magic.

Lloyd Webber has several hits that feel like failures, but ‘By Jeeves’ is perhaps his only failure that feels like a hit. An unlikely collaboration with playwright Alan Ayckbourn, this PG Wodehouse adaptation flopped hard in 1975. But a deliberately low-key 1996 rework was thoroughly charming and became a modest success.

As iconic as it is annoying, as genius as it is dumb, ‘Cats’ is in some ways the pivotal musical in Lloyd Webber’s career, the start of his post-Tim Rice commercial-juggernaut phase. Yes, it’s three hours of felines singing in a dump. But it’s full of memorable moments, and is more at ease with itself than the terrifying-looking upcoming film adaptation.

4. Joseph and the Amazing Technicolor Dreamcoat

This Biblical musical has a whiff of naffness to it. But don’t judge a coat by its (many, many) colours: underneath the gaudy trappings, this show is stuffed with high drama and endlessly catchy songs. We’re now firmly into the Andrew Lloyd Webber-Tim Rice zone, where everything is just better.

Joseph and the Amazing Technicolor Dreamcoat airs on Friday April 3.

3. The Phantom of the Opera

The most successful British musical in history is, of course, a completely ludicrous document of ’80s excess. But it still looks genuinely amazing on almost every level, and has a roster of wondrously OTT songs that makes it one of Lloyd Webber’s strongest scores. By far his best musical sans Rice.

There was only the smallest window in history when making a rock musical about Jesus was a viable prospect, and Lloyd Webber and Rice smashed it. ‘JSC’ is nuanced and moving and has some of the duo’s greatest songs. You don’t need to be a believer to find this one of their most touching works.

Yes, she’s ‘High Flying, Adored’, and top of our big ol’ list. Andrew Lloyd Webber and Tim Rice’s characteristically offbeat decision to make a musical about the little-known wife of an Argentinian president paid off in a wonderfully varied show with the kind of emotional heft their other hits mostly lack. Hopefully, this summer’s new production by Jamie Lloyd will cement its status as top of the Webber-Rice pops.

Note: there are technically three further Lloyd Webber musicals: ‘Cricket’, only performed three times then cannibalised for ‘Aspects of Love’; ‘The Likes of Us’, a 1965 obscurity that has never had a professional commerical production; and ‘Song and Dance’, which is ‘Tell Me on a Sunday’ repackaged with a second half of instrumental ballet. We’ve omitted them all for reasons that should be fairly obvious. 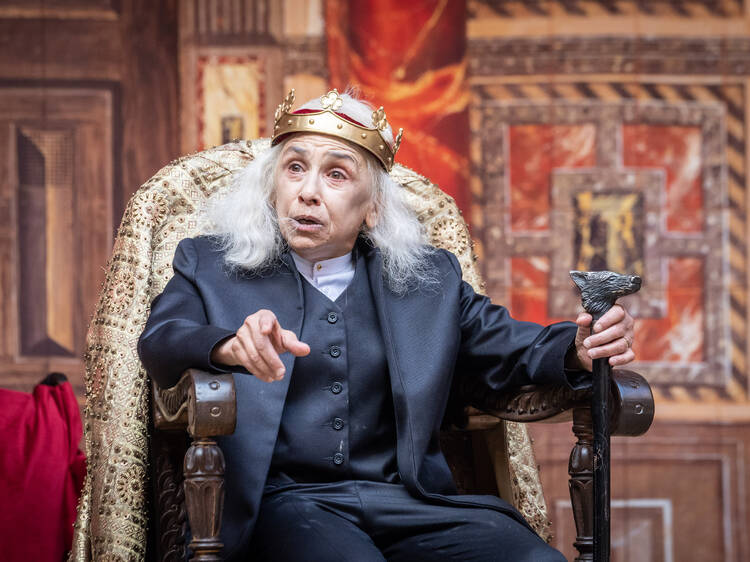 The best and biggest new shows hitting the London stage this month.