‘Bat Out of Hell – The Musical’ review 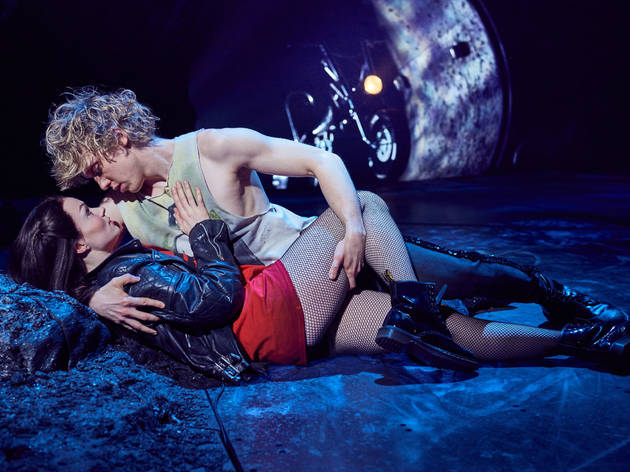 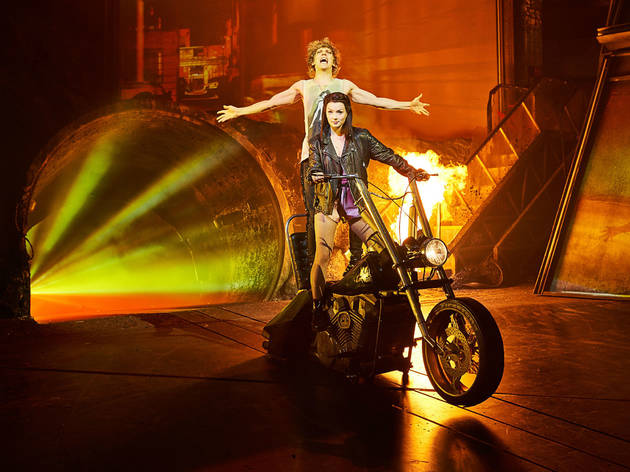 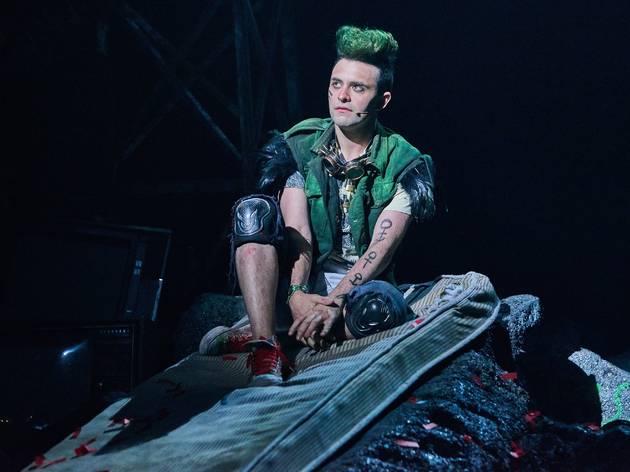 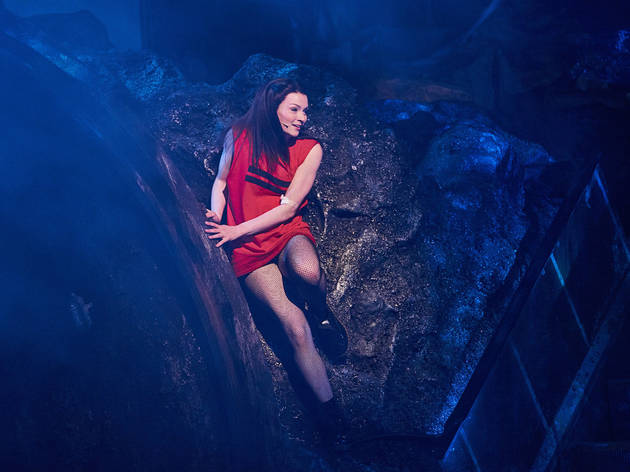 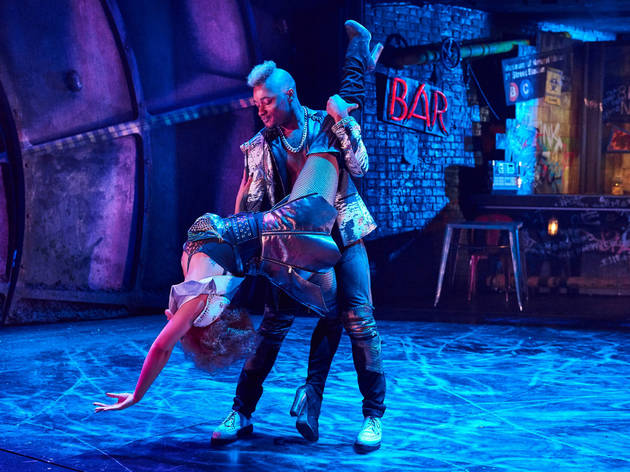 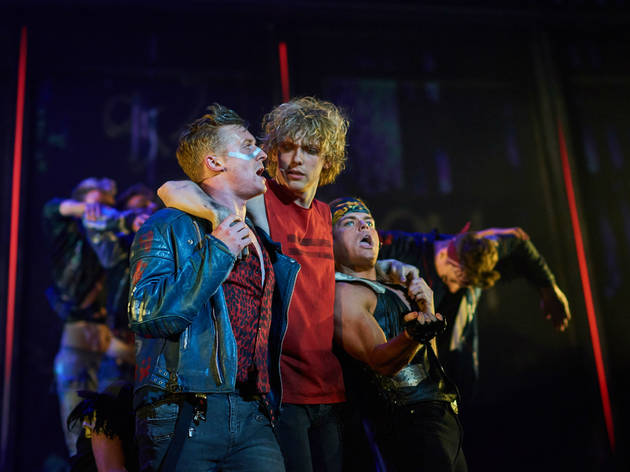 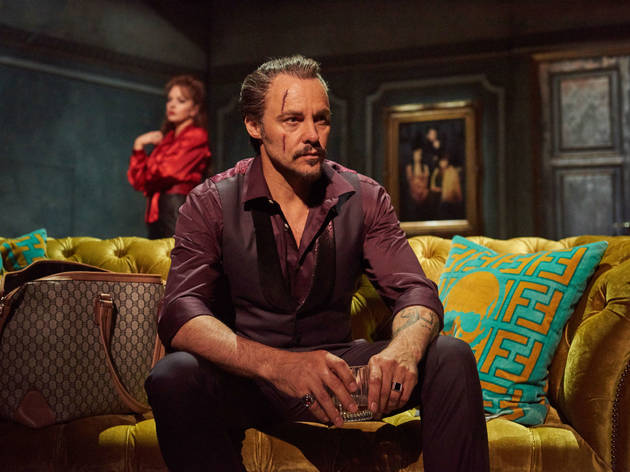 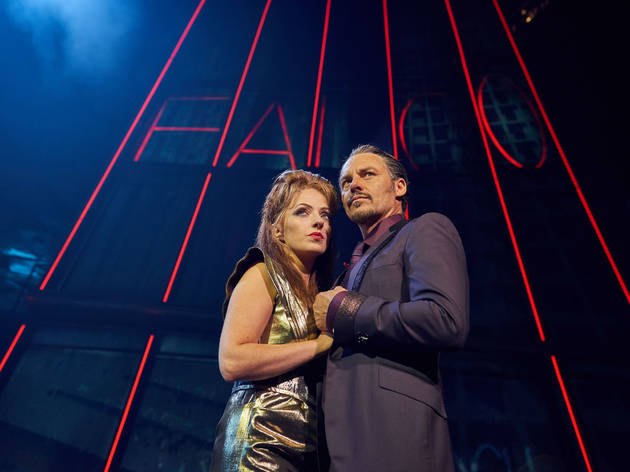 Following on from its run at the Coliseum in 2017, ‘Bat Out of Hell: The Musical’ has transferred to the Dominion in a parade of dry ice, skin-tight leather, fire-belching motorbikes – and just a smattering of self-awareness.

Really, it’s strange that a jukebox musical of the songs of Meat Loaf took as long as til 2017 to hit the stage. Jim Steinman’s songs drip with such mythos – youthful dreams, cars on highways, wild boys, lovelorn girls – that they half-seem destined for this daftly operatic tale of star-crossed lovers Raven (Christina Bennington) and Strat (Andrew Polec). She’s the daughter of tyrant Falco (Rob Fowler), who keeps her under lock-and-key in his penthouse-fortress; he’s the leader of a ‘Mad Max’-esque tribe of street mutants who cannot physically age beyond their late teens. Based on the amount of crotch-grabbing going on, their hormones have clearly gone nowhere.

The show careens between rock ’n’ roll bangers – ‘All Revved Up With Nowhere To Go’; ‘Paradise by the Dashboard Light’ – and tinkly piano ballads: ‘I Will Do Anything For Love’; ‘Heaven Can Wait’. You swiftly realise that they all basically tell the same story: of brutish, untameable men who are perfectly happy ravishing their swooning beauties, while offering them little else. And this is the main charge to lay against ‘Bat Out of Hell’: it’s mired in such unreconstructed ideas of romance. That’s partly countered by giving such sentiments to the female cast, so with ‘Two Out of Three Ain’t Bad’, it’s Zahara (Danielle Steers, fabulous) who gives admirer Jagwire (Wayne Robinson) the cold shoulder. If the sight of Bennington writhing about in her jimjams feels icky, it’s perhaps redeemed by musclebound Fowler stripping down to a jockstrap on the bonnet of a convertible. Perhaps not.

Director Jay Scheib’s SFX-laden production and set designer Jon Bausor’s dystopian vision are as grandiose as to be expected, their visual cues coming from the lurid cover art of the albums. That the two leads are returnees shows how accomplished they are in their roles: Bennington brings maximum grace to her damsel-in-distress, and the mop-haired, wild-eyed Polec conducts himself with a ferocity worthy of Mr Loaf himself. But moreover, he occasionally flashes a bemused look at the audience which reflects what we’re all thinking: ‘What the bloody hell is actually going on?’ Probably best not to ask, and by the final reprise, if you’re dwelling on that, you’re really missing the point here.

This review is from April 2018. Check official website for full cast details.