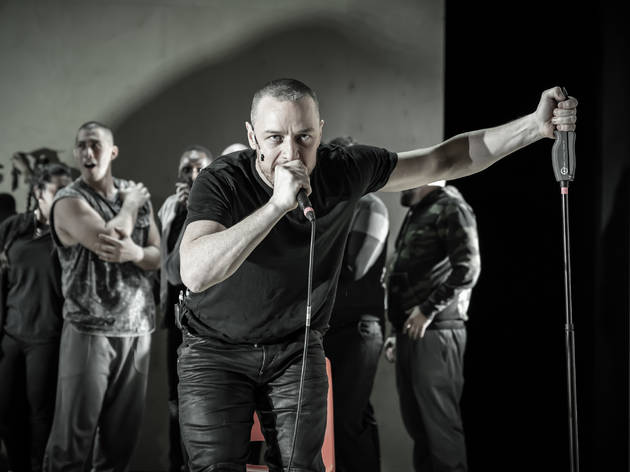 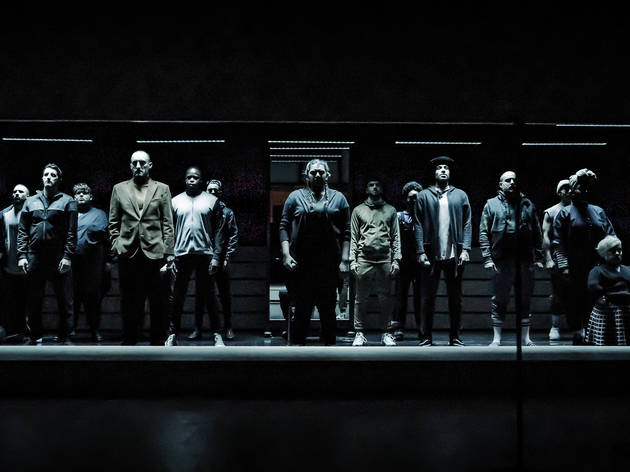 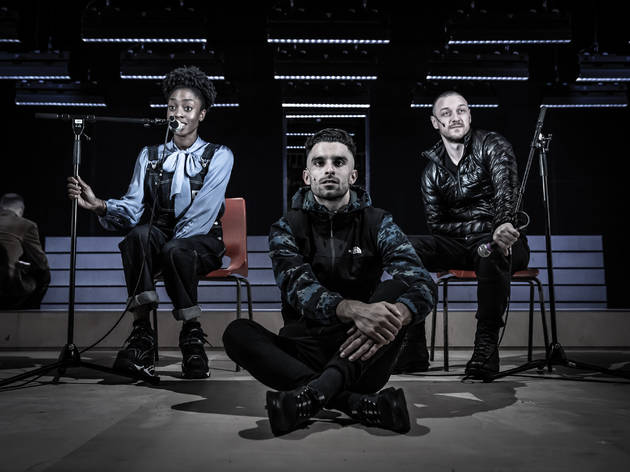 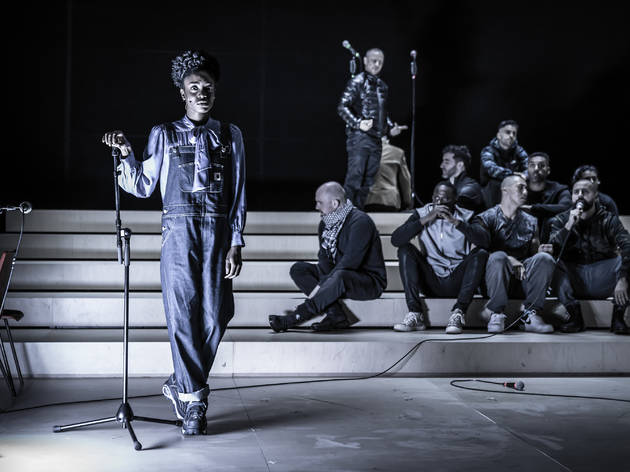 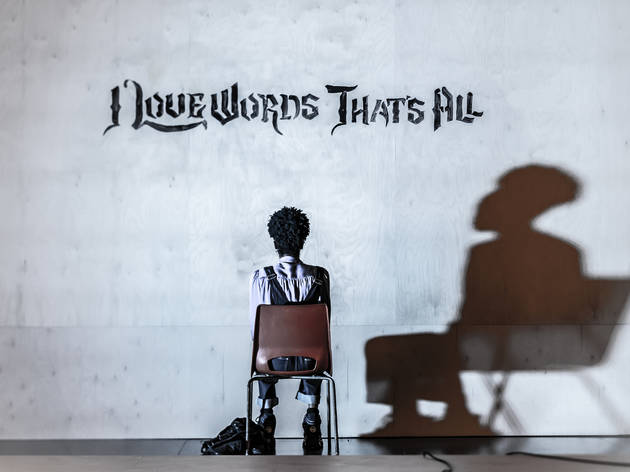 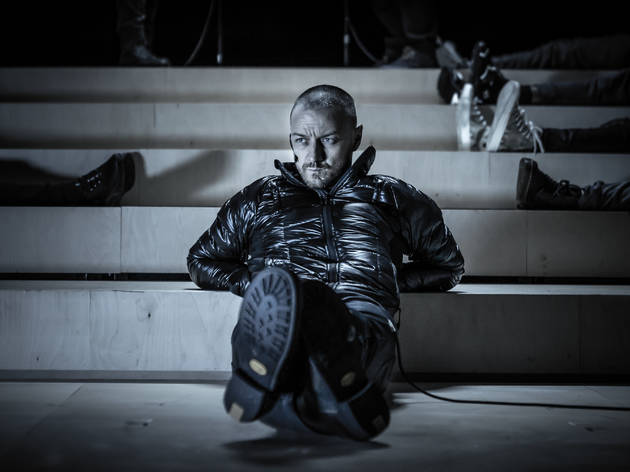 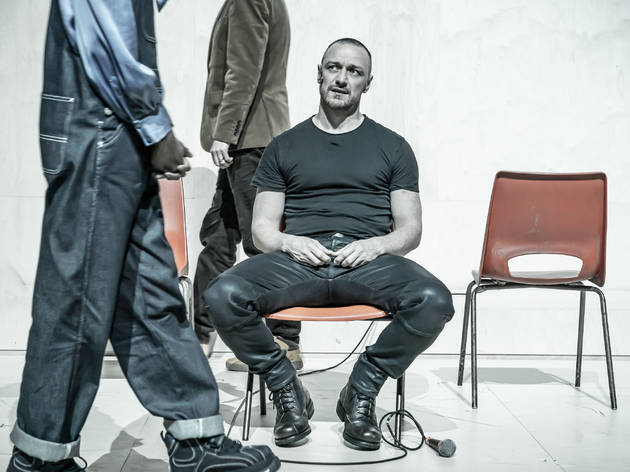 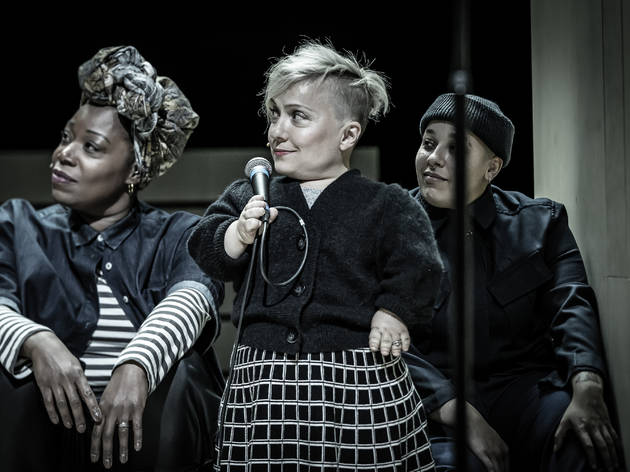 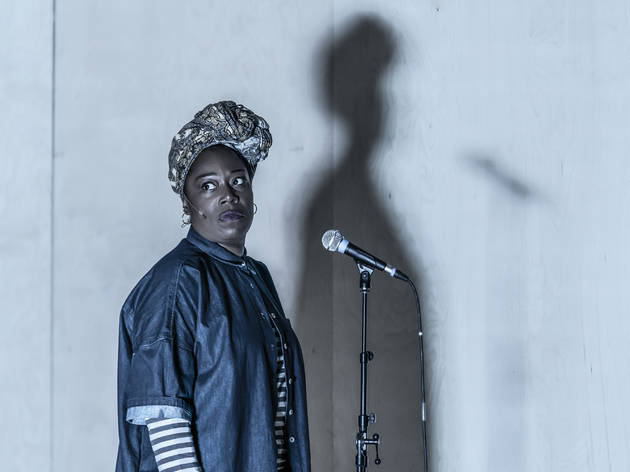 And James McAvoy is great in the role: sure, the idea of updating ‘Cyrano’ in this fashion is a bit yikes on paper. But in fact, this is a ferociously good revival from Jamie Lloyd, that almost totally reclaims, reinvents and reinvigorates a play so engrimed in period camp that it can sometimes feel like a chore to even remember it exists.

ICYMI: Edmund Rostand’s 1897 drama about a big-nosed, hyper-poetic French soldier who finds himself in a very complicated love triangle with his cousin Roxane and good-looking but tongue-tied fellow soldier Christian is written in rhyming verse.

And with the hindsight of Martin Crimp’s scorching adaptation, it is blindingly clear that modern rhymes offer a clear and exciting way forward. Lloyd and Crimp have conjured up something pretty remarkable, the cut and thrust world of seventeenth-century France reinvented as a series of rap battle royals, or grand poetry slams.

Although stripped to the bone aesthetically – Soutra Gilmour’s stark set is just a white stage and few mics – the first half in particular is vivid and teeming with ideas and life, as McAvoy’s lovelorn loon Cyrano, Eben Figueiredo’s nice-but-dim Christian and Anita-Joy Uwajeh’s sassy, self-absorbed Roxane spar joyously.

Crimp’s take has a wonderful drollness to it: at one point Cyrano engages in a verbal dual, and cheerily points out that he almost killed a man with just words; during the iconic wooing scene he switches to a south London accent, in imitation of Christian, on whose behalf he is pouring honey into Roxane’s ear.

It is objectively hilarious to hear McAvoy – whose laconic Glaswegian flow is blessedly cringe free, and indeed, rather charismatic – suddenly break into the exact thing you might have worried this would be. But also: you soon forget that because his declarations of love rapidly become beautifully, horribly, air suckingly intense.

That’s the key to this production: after all the arched eyebrowed swagger – dare I say panache? – of the first half, it’s the second that really destroys you, a depiction of three people unable to honestly articulate their feelings for each other, but unable to exist apart; for a guy that’s been something of a figure of fun, Figueiredo’s Christian is absolutely heartbreaking come the end.

I’ve not mentioned the nose! The extremely handsome James McAvoy wears no prosthetics; instead it’s kind of a nose of the mind – only said to be there. This works: it’s not very important that Cyrano has a big honker (he was a historical figure and the evidence he really has a big nose is hysterically thin), simply that we have a plausible explanation for his low self-esteem.

Beyond the central trio, there’s a large, diverse, once again extremely handsome and very talented ensemble – it’s not a spoiler to say that the production ends with a banging beatbox solo from ensemble member Vaneeka Dadhria.

Lloyd’s Cyrano has an austere, angular, edgy aesthetic, and if it is fundamentally a fact that it’s the creation of two middle-aged white men with an (admittedly stacked) middle-aged white star, then they have made it all look and sound just right. It doesn’t have the euphoric effortlessness and virtuoso authenticity of ‘Hamilton’; but it’s not a million miles off, and the fact the two shows can even be discussed in the same breath is a testament to the fact that Lloyd and co have cooked up something pretty remarkable.