My Account My Profile Sign out
My Account
Search
Worldwide Europe United Kingdom England London Hamlet review
Advertising
Move over, NT Live: in 1964, a Richard Burton-starring Broadway production of ‘Hamlet’ was filmed and then broadcast in over 1,000 US cinemas. It wasn’t actually shown live, but in a bizarre ’60s gimmick, almost all copies of it were destroyed immediately after screening, a peculiar gesture partly intended to enhance the notional ‘liveness’ of the experience.

Not every copy was erased, though: arch New York experimental theatre legends The Wooster Group have managed to get hold of two, which they have reverse engineered to create as strange and technically dazzling a ‘Hamlet’ as you’ll ever see.

To say Elizabeth LeCompte’s production has been deliberately made to feel like it’s not actually live would be simplifying things. Nonetheless, the cast – led by prodigiously talented Wooster regular Scott Shepherd as both Hamlet and the evening’s host – perform in sync with and in imitation of the film playing on the screen behind them, a film that gets edited, fast-forwarded and occasionally even spliced with footage from the 1996 and 2000 movie versions.

Why? I think as ever with The Wooster Group, a major reason is simply ‘because it is hard’: it really is a remarkable sight to see these actors moving in lockstep with their long-gone screen alter egos, jerking when the film glitches, zipping forwards and speaking in squeaky voices when the film is fast forwarded, while Shepherd  puts in a turn that’s nothing less than titanic.

Still, there’s more to it than that. Though the production effectively jettisons any conventional attempt at telling Shakespeare’s story, the thematic resonances are fascinating. As well as their other meddling, The Wooster Group frequently digitally erase a given actor in the film, or fade them until they look like a ghost.

It is a play haunted by a film of a play – but in the fades and edits and digital trickery, the film is also haunted by the play in front of it. Cinema haunts the stage and the stage haunts the cinema; four centuries of Shakespeare haunts and is haunted by The Wooster Group and its new technology.

And there is madness – everything occurring on stage is manifestly pretty crazy; are we seeing things from the deep confusion of Hamlet’s perspective?; is the strange meld of Burton in ’64, Shepherd in ’13, Branagh in ’96 and Hawke in ’00 symptomatic of Hamlet’s schizophrenia?

Though not totally lacking in emotions, this is undoubtedly a cerebral experience, one that will leave some cold or confused. But if you can surrender to its strange, resonant dance, it’s a night to savour. 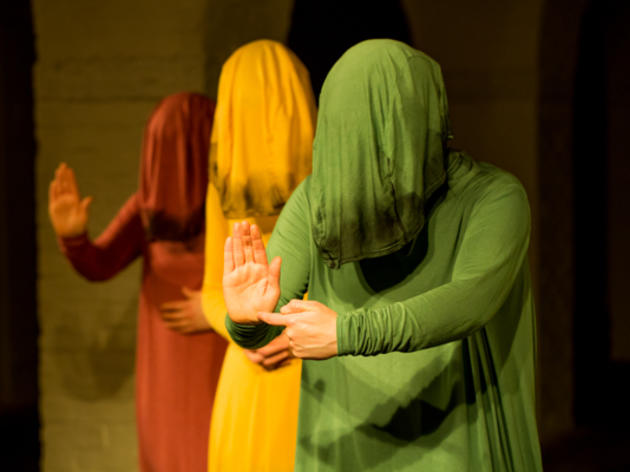