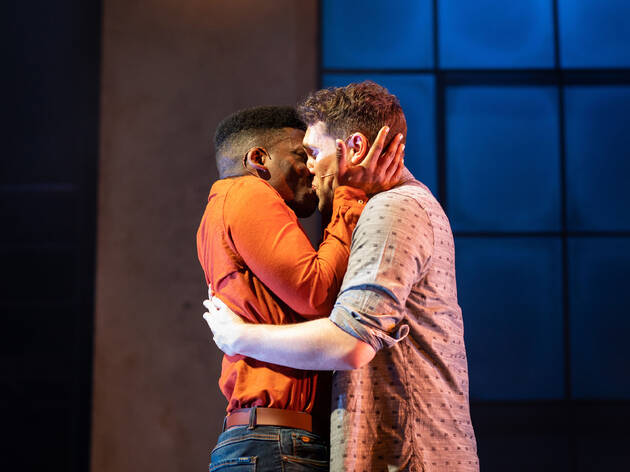 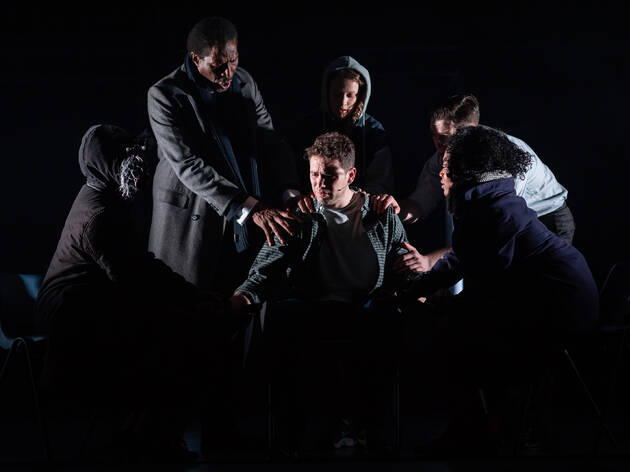 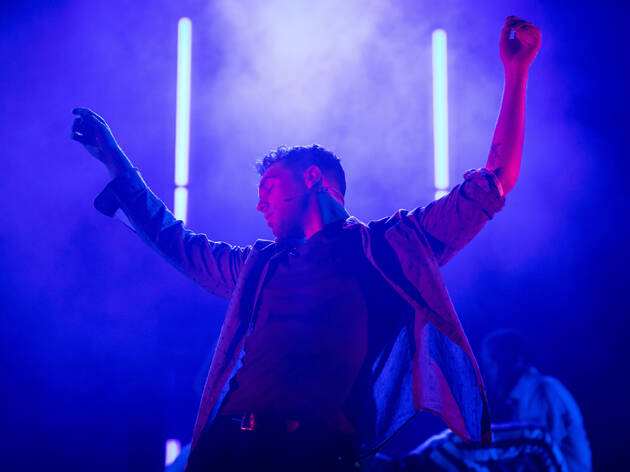 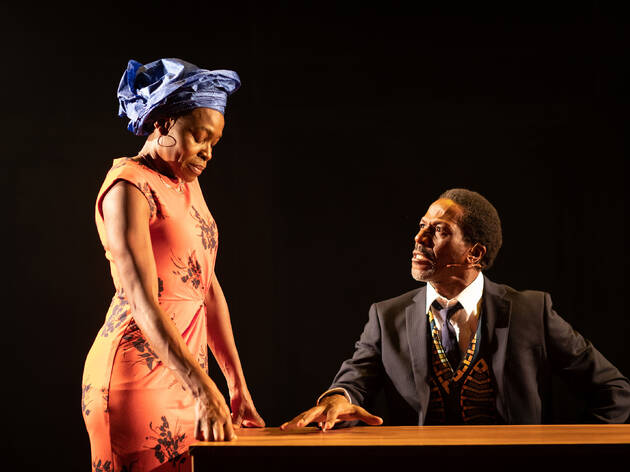 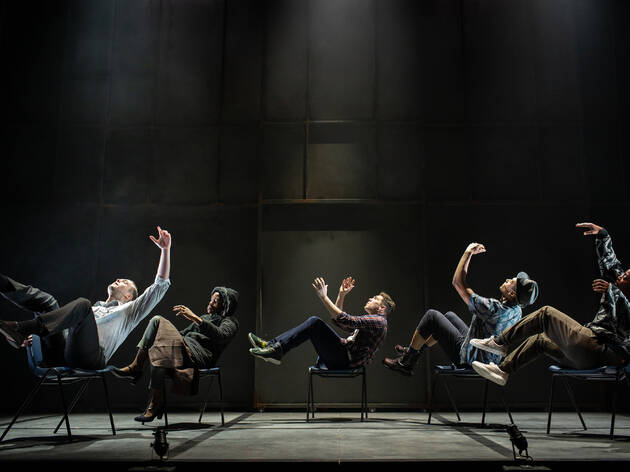 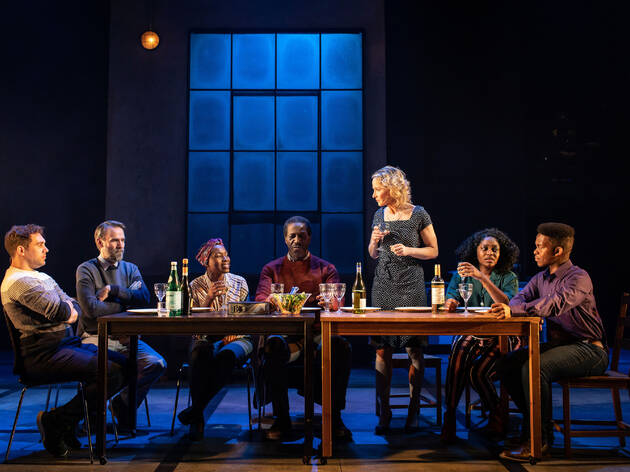 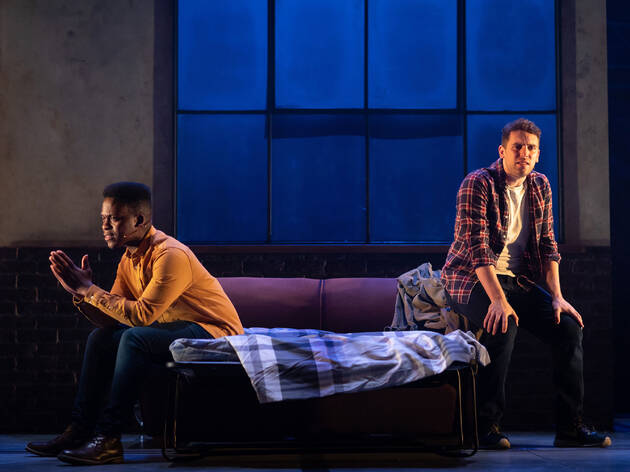 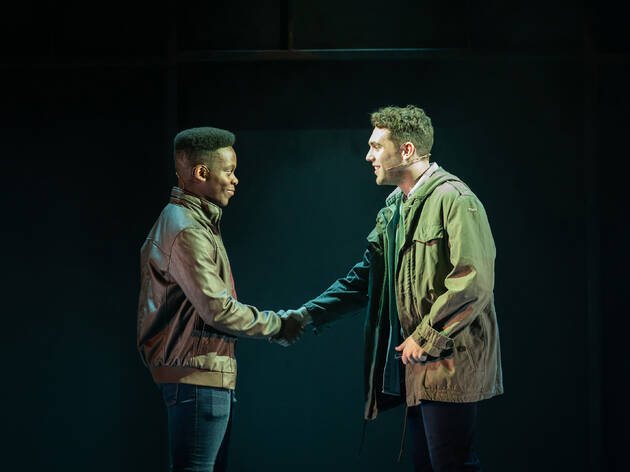 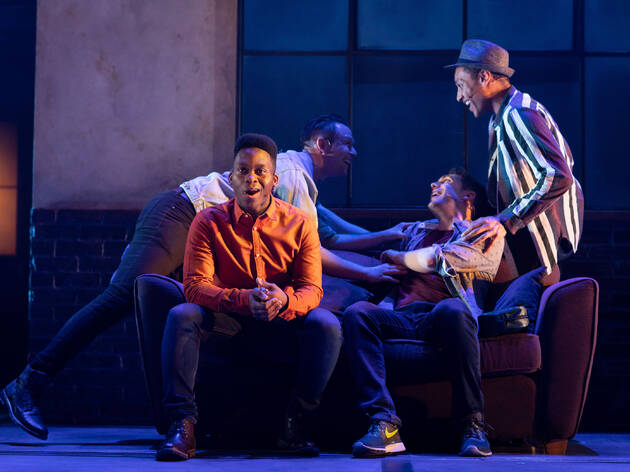 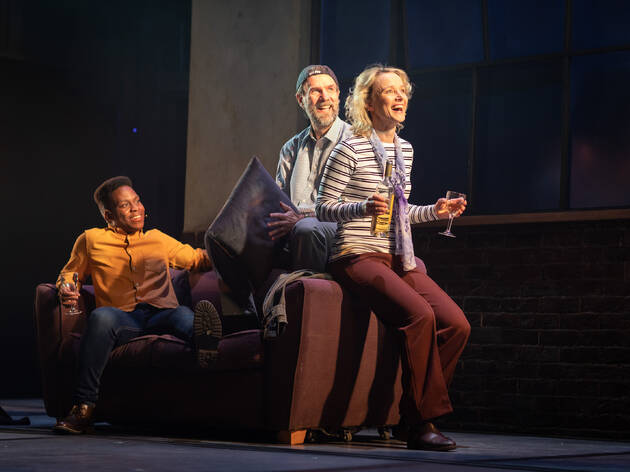 Kele Okereke of jagged indie-rockers Bloc Party is absolutely not somebody you’d have pegged as a likely candidate to write a musical. But ‘Leave to Remain’ – a collaboration with veteran TV writer Matt Jones – is an idiosyncratic stage debut that doesn’t feel like the finished deal, but is certainly more interesting than any number of bigger, more polished affairs.

In the opening montage of choreographer-director Robby Graham’s compact, energetic show, we see the courtship of effusive American Alex (Billy Cullum) and reserved Brit Obi (Tyrone Huntley) as they meet, swap numbers, date, snog, and Alex reveals to Obi that he’s a recovering drink-and-drug addict. And that’s all before the first song kicks in, the surging ballad/banger ‘Not the Drugs Talking’, which soundtracks a druggy night out wherein ten months into their relationship Obi tells Alex he loves him and Alex tells Obi that his firm is relocating to Abu Dhabi due to Brexit and that there’s only one way they can stay together – getting hitched. (NB that’s the extent of the immigration stuff – it’s not a show about Brexit).

The intensely private Obi agrees, but it’s apparent that he’s doing so through slightly gritted teeth. And the reasons become apparent, as he feels compelled to invite his Nigerian parents, who threw him out aged 16 and who he never really reconciled with. Meanwhile, Alex reluctantly summons his wildly overbearing mother from the US, and tensions start to rise.

Okereke has said he wanted to write this story because there are so few dramas out there about modern gay relationships.

Musically, he makes a good fist of it: the songs are propulsive and catchy, on the more electronic side of indie but with an alluring highlife sheen, rendered via a mix of live singing, pre-recorded electronic backing and guitarist Chrio Blake stalking a platform in Rebecca Brower’s grungy warehouse set, wrenching exotic sounds out of his pedalled-up guitar.

Thematically, I suppose what I took it to be saying it is that the still essentially heteronormative public ritual of marriage can be intensely traumatic to gay people who have – at best – only brokered fragile truces with their families regarding their sexuality.

It’s an interesting idea, though the fact that it’s such a miserable experience for both men ultimately leaves the story feeling poorly weighted. Once Alex and Obi get engaged, ‘Leave To Remain’ becomes glum, introspective and lacking in dynamics, as the protagonists dissolve into moody messes as they confront their families. Coupled with a soapy plot and low stakes – it would be nice if Obi and Alex made it, but it doesn’t feel that important – and the dopamine levels remain pretty low for a musical.

Still, the songs, the premise and Huntley’s charismatic turn as the brittle, secretive Obi are enough to make ‘Leave to Remain’ constantly intriguing, if not always actual fun.