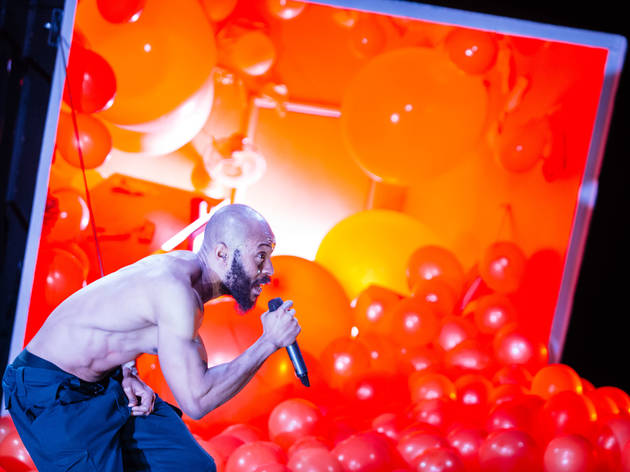 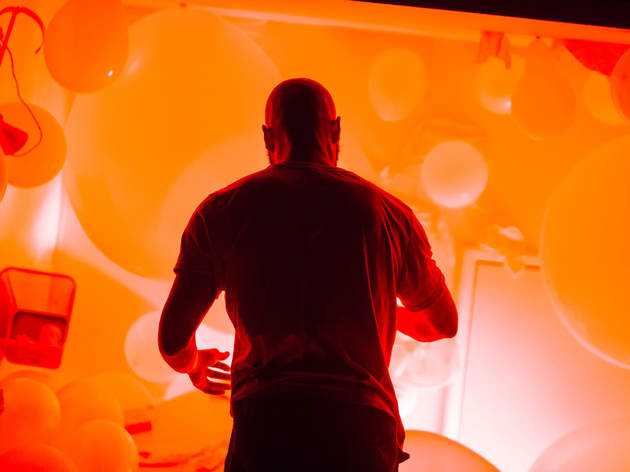 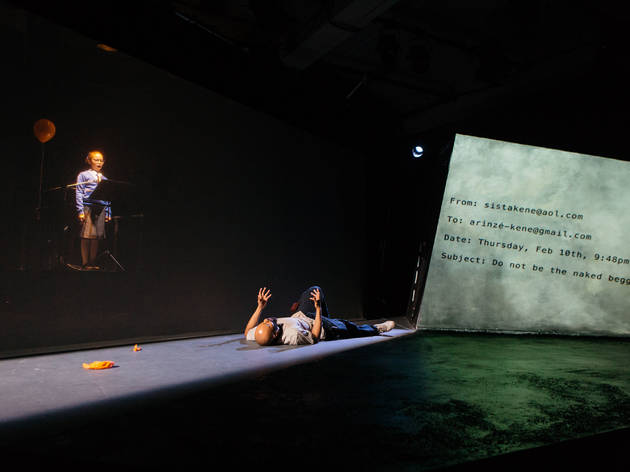 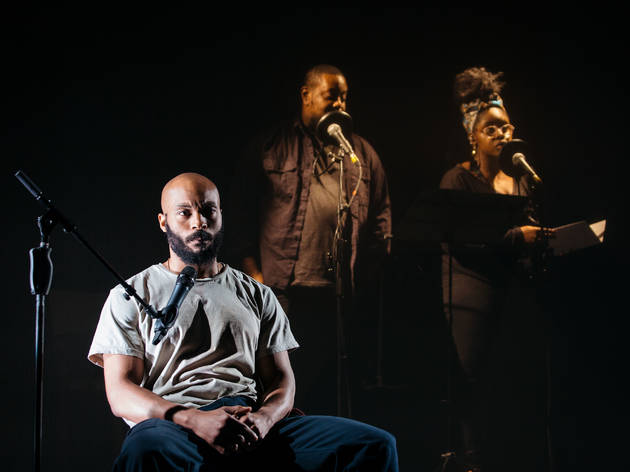 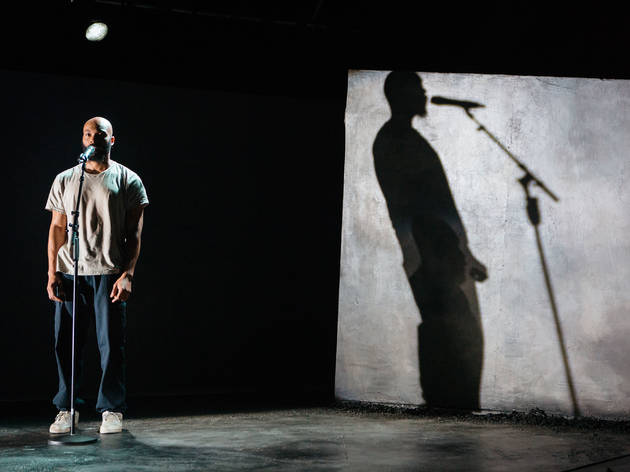 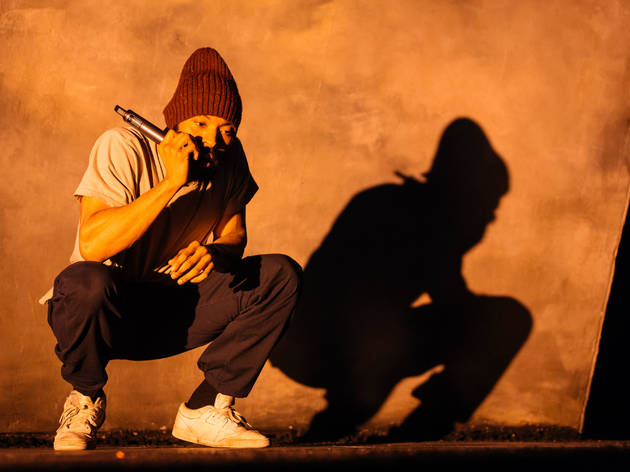 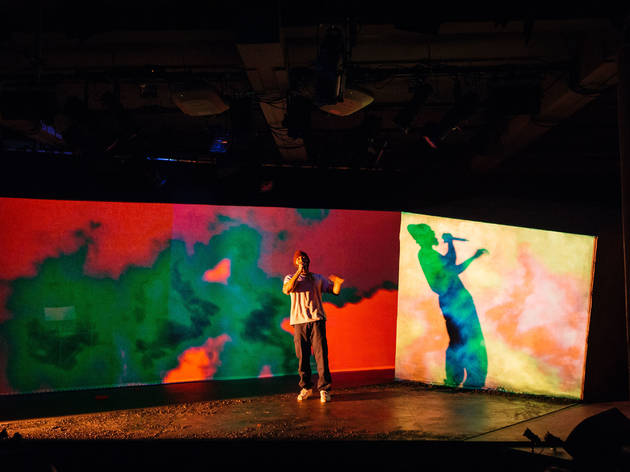 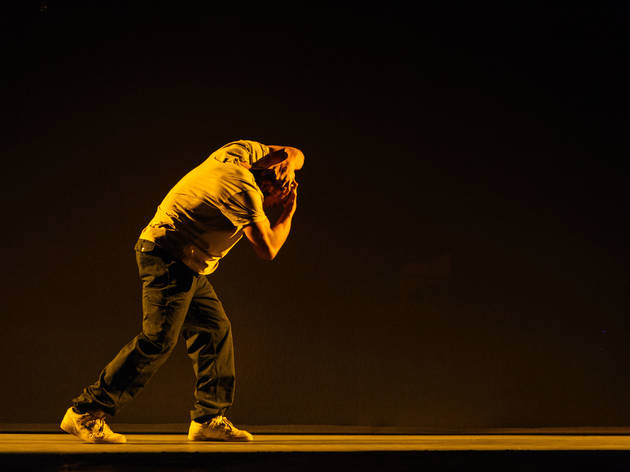 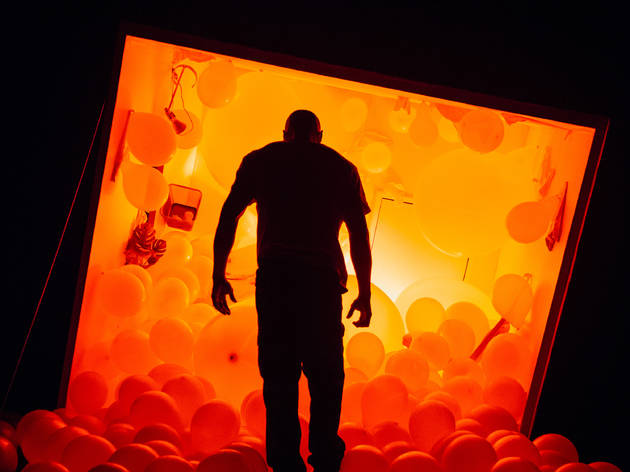 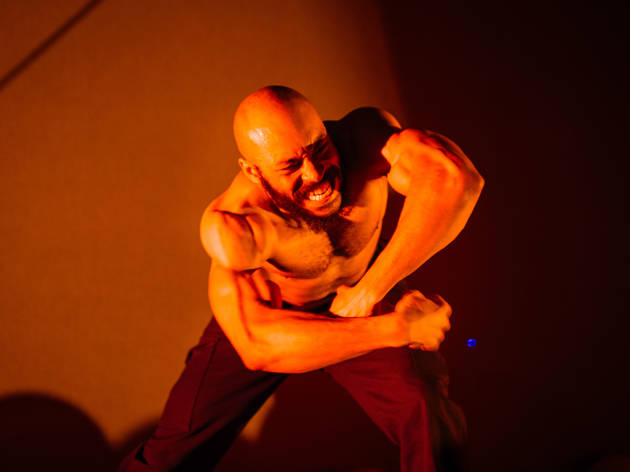 ‘Misty’ transfers to Trafalgar Studios in September 2018. This review is of its original run at thge Bush Theatre in March 2018

A story of a fight on a night bus, delivered by actor-playwright Arinzé Kene with a physical swagger and grime-like flow. Flanking him, Shiloh Coke and Adrian McLeod play drums and keys. It’s gig-theatre, performance poetry, suggesting London is a body and its inhabitants blood cells. Only some of them – black people, it’s implied – are viruses.

Kene suddenly punctures his set-up. Coke and McLeod become unimpressed mates, ringing up ‘Arinzé’ to offer feedback on his play. Another ‘generic angry young black man’ story. ‘Ain’t nothing but a modern minstrel show.’ He’s selling out by writing the black narrative white people want to hear. It’s a razor-sharp interruption: funny but astute. Because his monologue surely is exactly the ‘urban safari jungle shit’ theatre producers get turned on by.

Kene blows up an orange balloon. It deflates, like his ego. From then on, balloons are used as a striking visual metaphor throughout Omar Elerian’s beautifully directed and Rajha Shakiry’s beautifully designed production. Kene wrestles with balloon; later, he gets trapped in one. It’s a pure visual way to show his struggle with telling a story, when you know that story will always be labelled ‘black’, will always be a battleground of representation.

He keeps telling it, though. Turns out the monologue was inspired by the ‘true’ story of his mate Lucas. And Kene flips the argument: why shouldn’t he tell this? How is it a step forward to stop black voices articulating their lived experience? Lucas said he’d come to the theatre – if he could see stories like his on the stage.

It’s bracing to see the question of who gets to tell stories – and how they might be circumscribed – tackled head-on here, with wit, exuberance and visual flair. Kene is a magnetic performer, and served well by his actor-musicians, who prove as good at cutting comic timing as they are at delivering crisp beats.

But ‘Misty’ is far from perfect. Kene could take his foot off the pedal and trust his writing, and his audience, more. In the second half, ‘Arinzé’ realises he isn’t the virus; the ‘flat-white-sipping yoga addicts’ swarming through the city are. But Kene’s explication of gentrification is heavy-handed, and the coffee-shop satire feels old-hat. Attacking arty hipsters lends a frisson when they make up half the audience, but isn’t it a cheap shot in a show explicitly arguing against sweeping stereotyping?

The last 20 minutes feel like the performance is struggling to reach a clever enough ending, and it rather chokes on attempts to eat its own tail. That said, the final rapped rebuttal to the accusation he’s writing ‘jungle shit’ lands a punch of superbly fierce defiance – and duly ignites the room, burning through any niggling reservations.