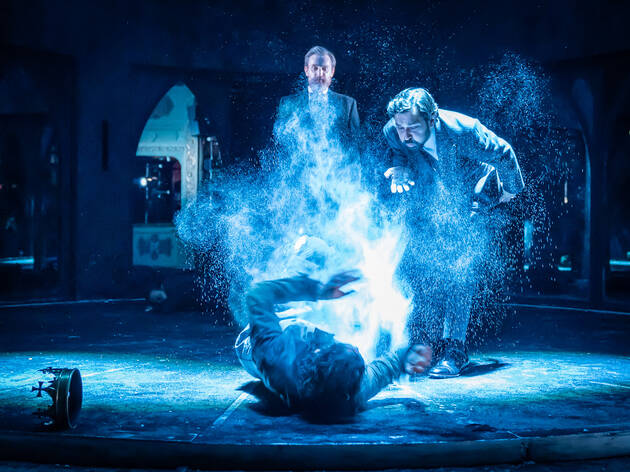 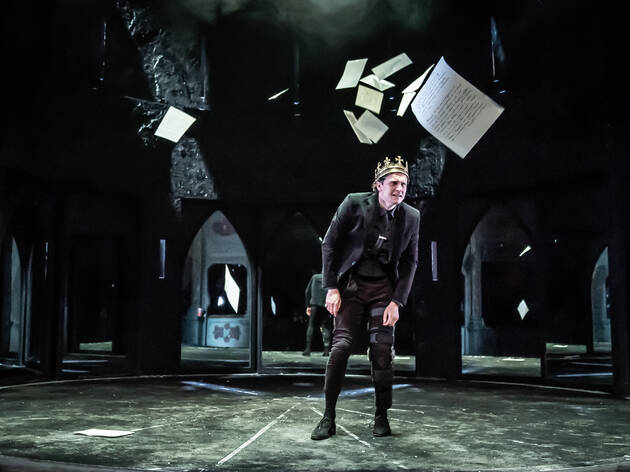 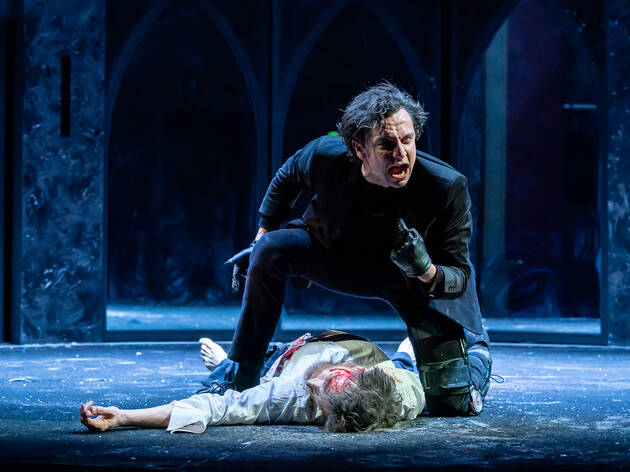 3/21
Tom Mothersdale as Richard and John Sackville as Henry 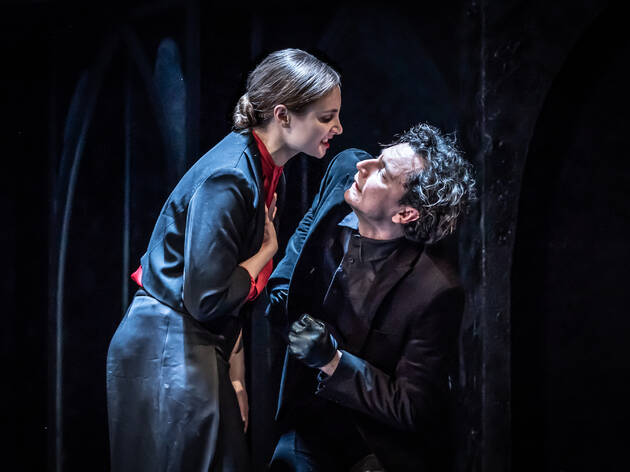 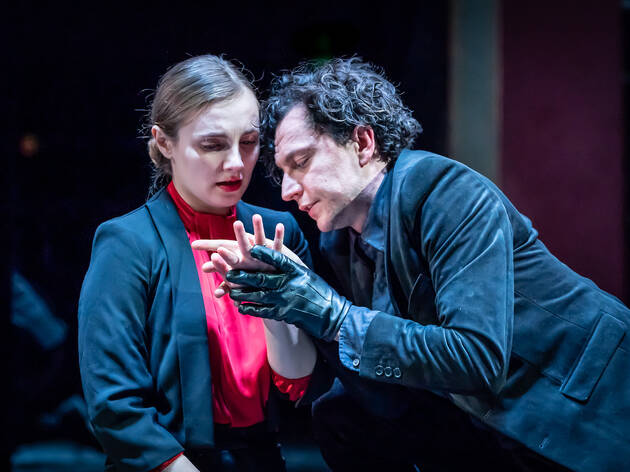 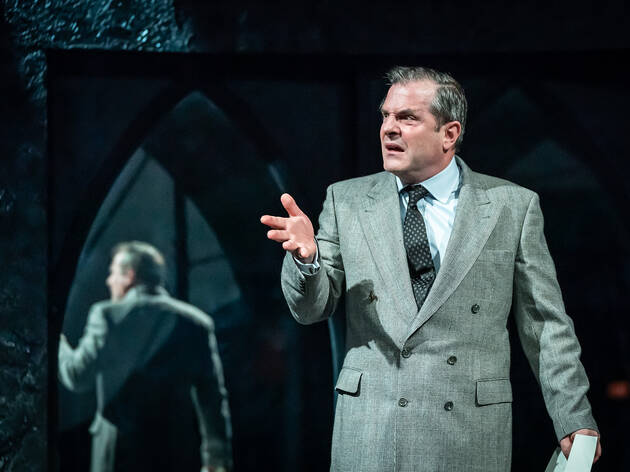 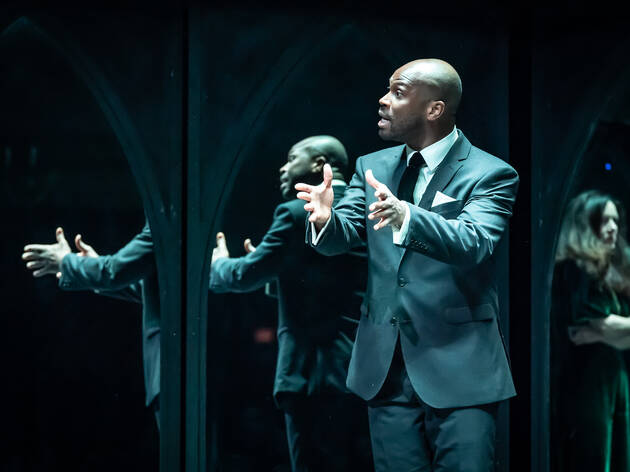 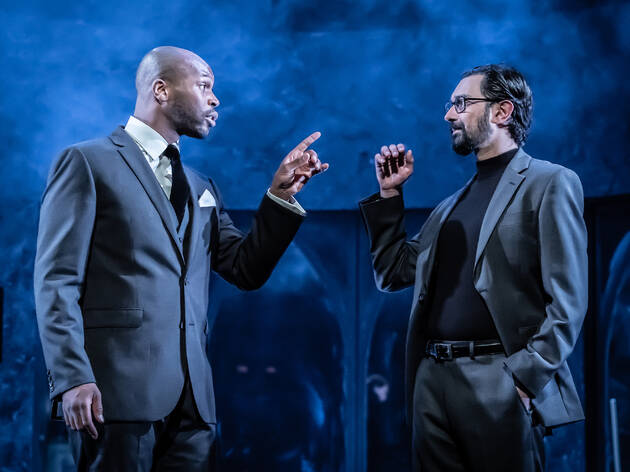 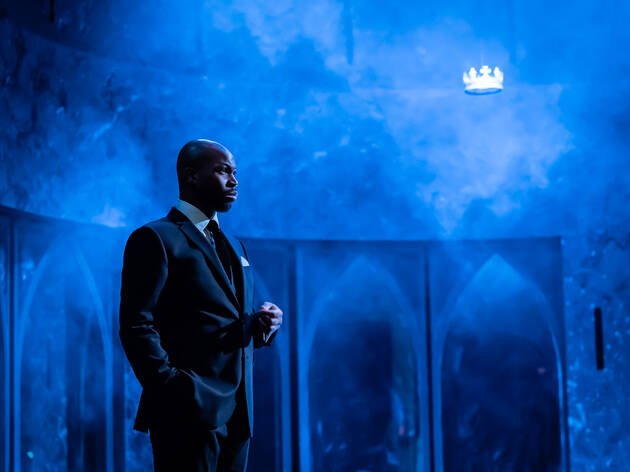 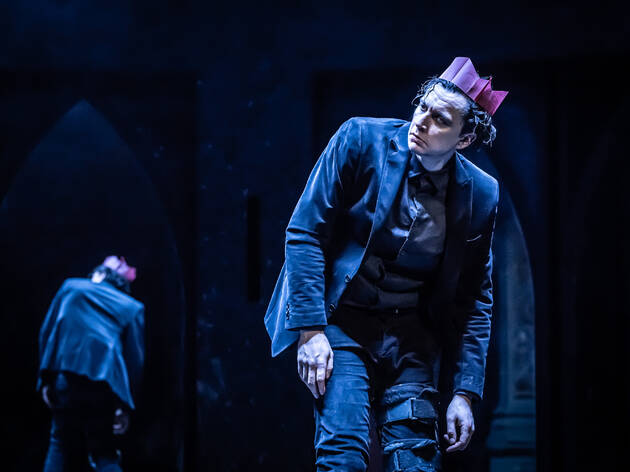 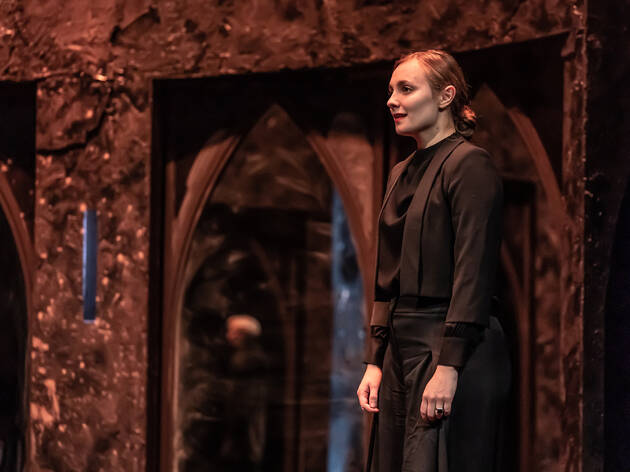 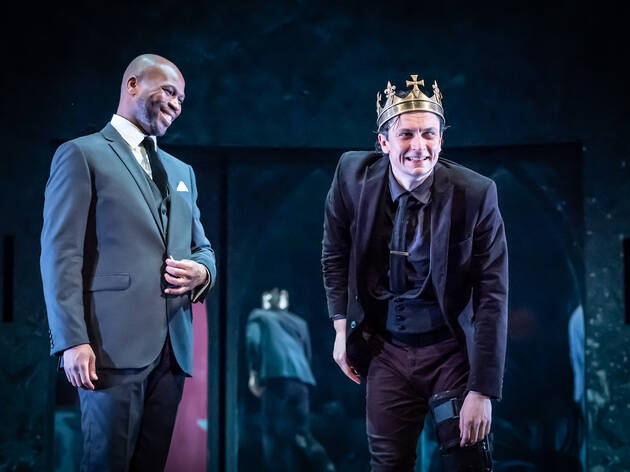 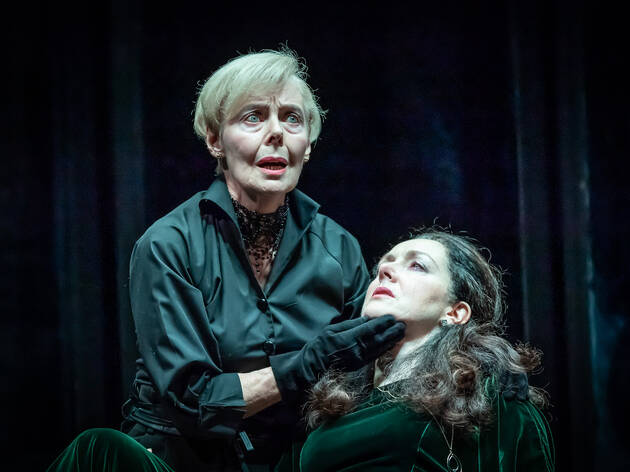 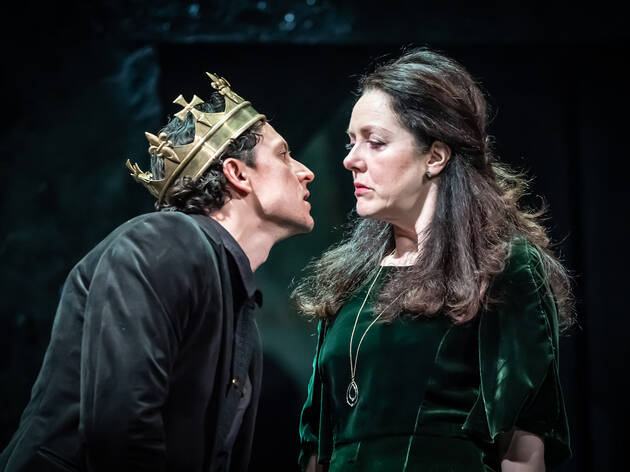 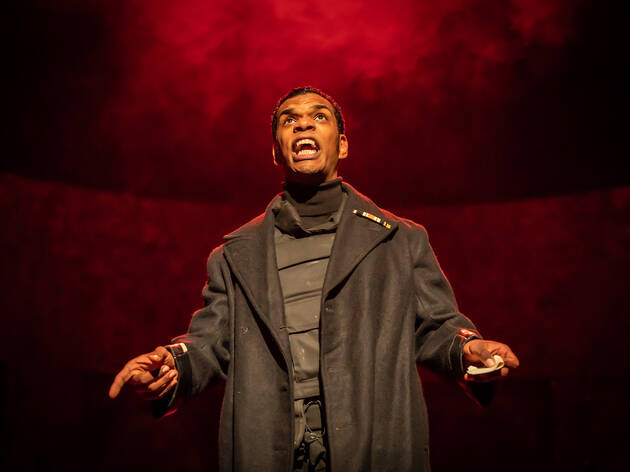 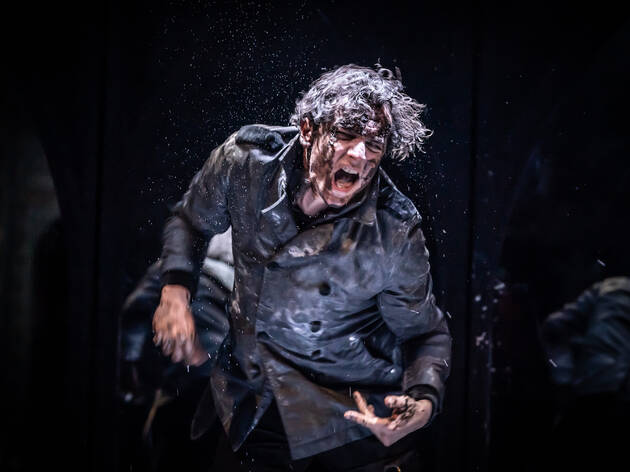 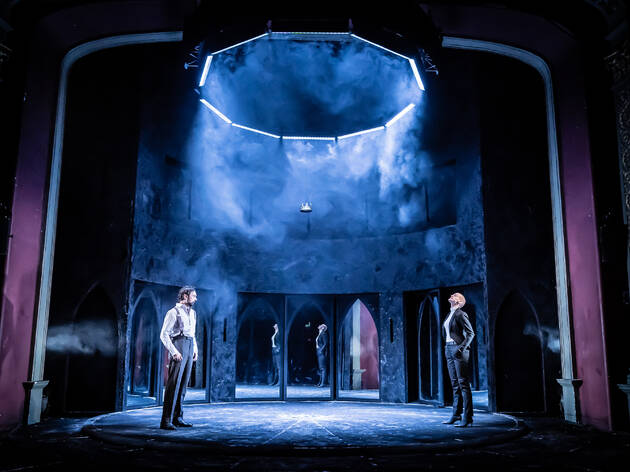 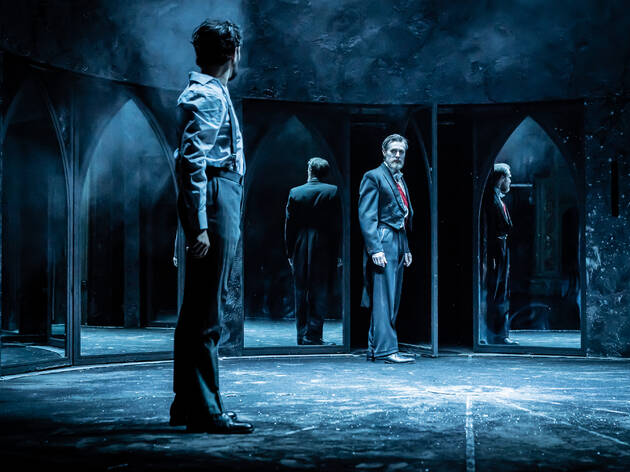 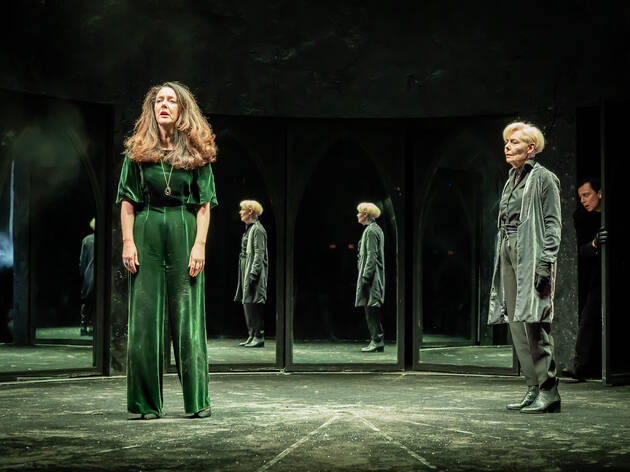 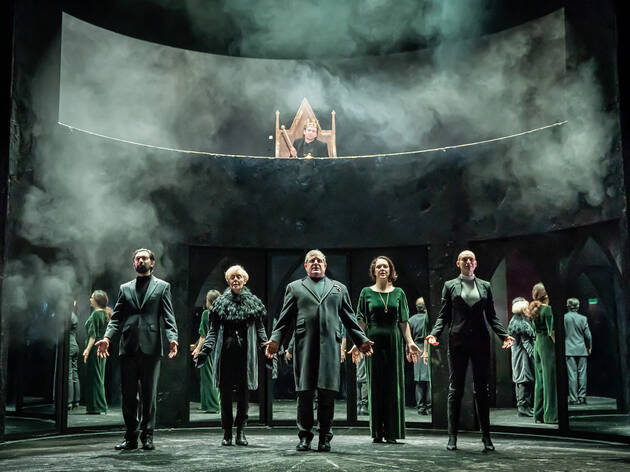 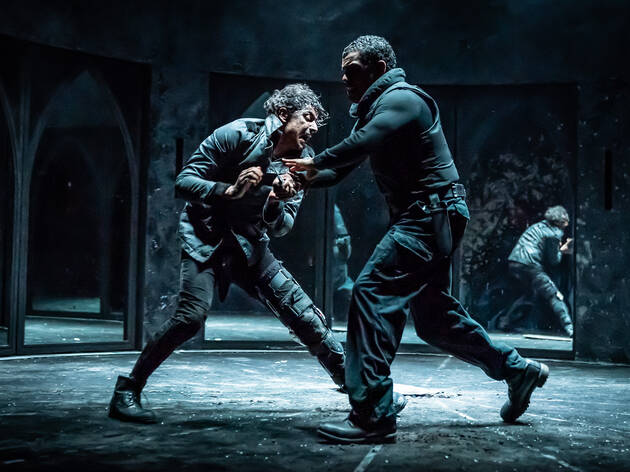 Long before his remains were ignominiously dug up in a Leicester car park, Richard III suffered more than his fair share of indignities. Not least Shakespeare’s virtuoso hatchet job of a history play, which sketches him as a murderous, conniving villain. And John Haidar’s production for Headlong lays it on thick. Tom Mothersdale is fascinatingly horrible to watch, like Alex from ‘Clockwork Orange’ given a whole royal court to play with.

He’s described in the text as a ‘bottled spider’ and the description feels more vivid than ever, here. He doesn’t walk, he careers and lurches; and when he’s given a piece of parchment telling him the two princes in the tower have been successfully murdered, he eats it like he’s introducing a juicy bluebottle into his mouthparts.

So it’s a ‘big’ performance, then – but in a space like Ally Pally’s theatre, it needs to be. This newly reopened, carefully restored but still fetchingly crumbling, auditorium originally fell out of use, in part, because it was hard to find a shows that were big enough to fill it (WWII didn’t help either). It’s more like a gig venue than a theatre, with its balcony set way back from the stage. Headlong’s production plays up to this with rock concert-style lighting, doomy amplified sound and video game flashes of red light every time Richard III stabs someone on his murderous path to the crown.

But this ‘Richard III’ has a softer side, too. Chiara Stephenson’s huge (and satisfyingly old school) castle-style set design is full of gothic apertures of reflective glass, ready to hold up a mirror to Richard’s worst excesses. His family members and dynastic rivals pose in idyllic family portrait groupings behind them, a reminder of the warm family ties he’s shut out from. The final ‘my kingdom for a horse’ scene is less battlefield calamity, more writhing psychological breakdown, alone on a muddied field.

At just over an hour for each half, this production canters along, without sacrificing its nastiest, most memorable moments: not least Richard’s attempts to woo Anne (Leila Mimmack) as she mourns her lost family. Or the scene where Eileen Nicholas, as his mother, magnificently upbraids him from the height of the theatre’s stage, as he careens and crumbles through the crowd below. It’s typical of a production that revels in spectacle without ignoring its audience. Maybe there's room for a more revisionist perspective on poor Richard, but still, this show has ways of sucking you into its twisted vision.