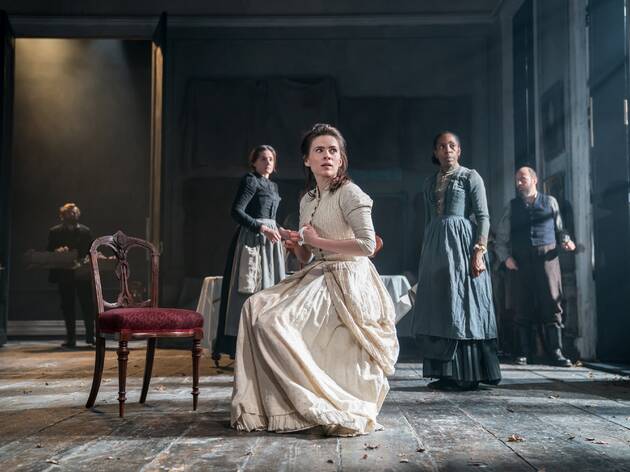 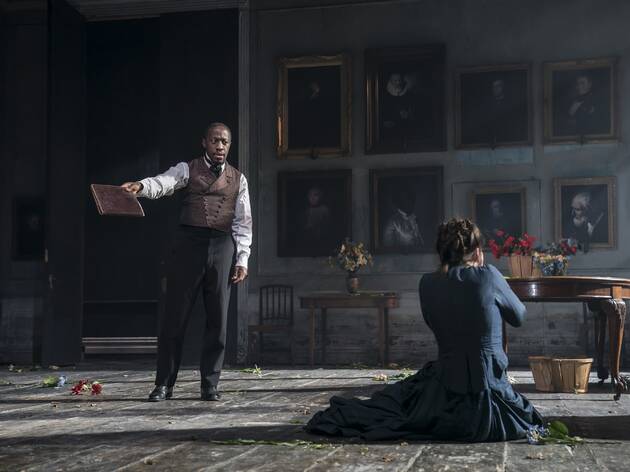 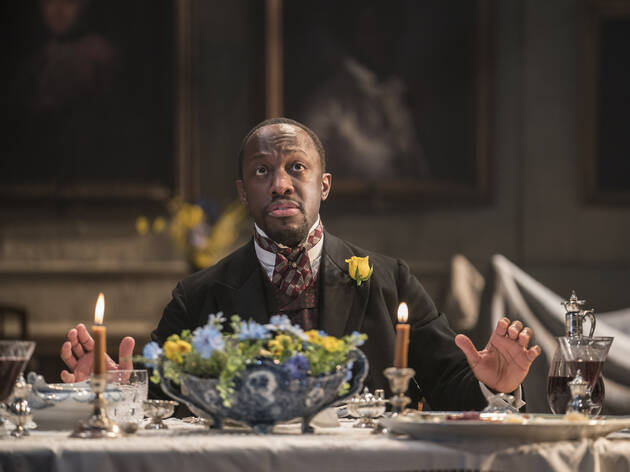 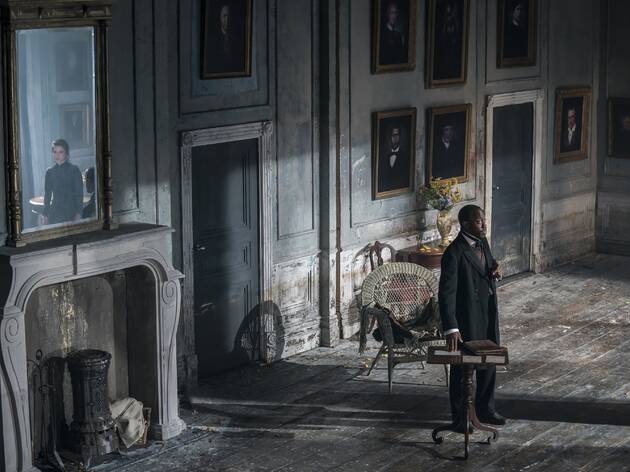 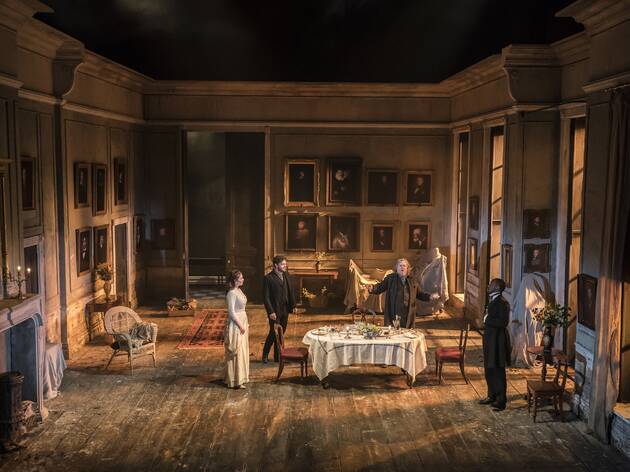 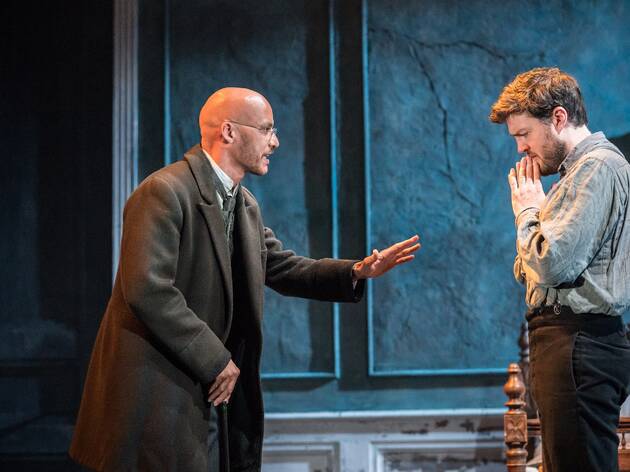 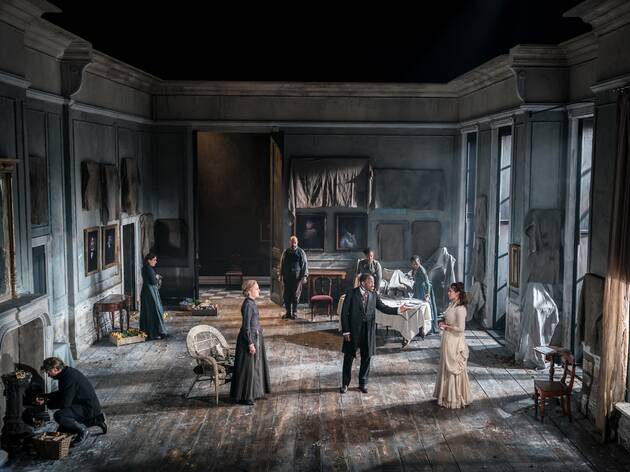 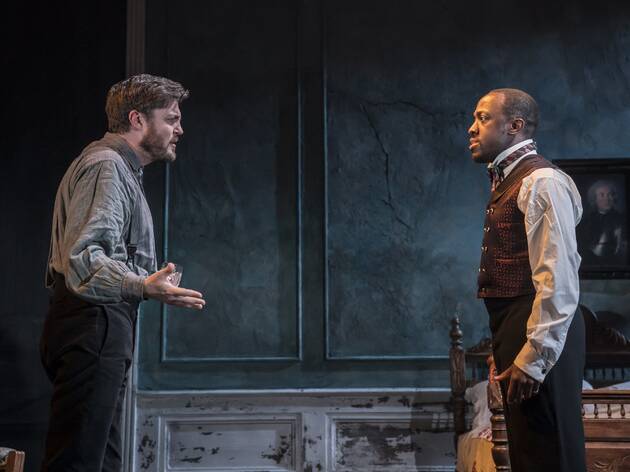 ‘Rosmersholm’ by Henrik Ibsen is a play that few people have heard of and even fewer can pronounce (FYI the verdict appears to be ‘Rosmer’s Home’). So even with the presence of the ‘Avengers’-adjacent – not to mention terrific – Hayley Atwell in the cast, it feels spectacularly audacious of super-producer Sonia Friedman to just bung a production of this obscurity cold into the West End.

And she’s pretty much pulled it off. Although clearly somewhat massaged by adapting playwright Duncan Macmillan, Ibsen’s depiction of a fragmenting, polarised society torn between extremes of right and left, faith and atheism, just on the cusp of a monumental election, feels spectacularly timely.

John Rosmer (Tom Burke) is a respected pastor who has become a virtual recluse since the suicide of his wife. He lives with his servants, his wife’s former companion Rebecca West (Atwell) and his crumbling sense of self. His faith has deserted him; Rebecca’s progressive notions are beginning to make a lot of sense.

Perhaps the most powerful idea of the play is that of a single man embodying a national malaise. Although Rebecca and Rosmer’s erstwhile brother-in-law Andreas (Giles Terera) literally represents the play’s political extremes, it is Burke’s Rosmer who is torn between them, spiritually and politically divided and barely functional, poisoned by society.

Erstwhile ‘Hamilton’ star Terera steps comfortably into West End drama almost-leading-man status: his local governor Andreas is disarmingly likable, a compassionate, decent person… up to a point. Unfortunately, he is convinced that he is right and everyone who disagrees with him is wrong – he teeters on the brink of fascism.

But Atwell is the star of the show. Constantly rocking on her feet like she’s under starter’s orders, she’s tomboyish despite the tresses and dresses, literally straining against the restrictions of Victorian society. Broadly speaking, Rebecca represents a politics that a modern audience can get behind, and for much of the play Atwell has a surging energy and momentum, a sense that she is moving inevitably towards something better and will drag these people towards it through sheer belief in a better world.

That this doesn’t happen is a function of Ibsen’s melodramatic plotting, which sometimes feels strangely handled here. A flurry of lurid late revelations both from Rebecca and about her sit oddly with the exquisite naturalism and glacial pace of Ian Rickson’s straitlaced, straight-up period production, which isn’t particularly accommodating to some of the weirder stuff in the script (eg most of the characters talk about how they’re seeing visions of a white horse). Still, there are compensations: the creative team is pretty remarkable. Rae Smith’s set is a thing of brooding majesty. And Neil Austin’s dolorous lighting is beyond exquisite.

Sorry to say but I just didn’t get on with Burke’s performance, an old-fashioned piece of Big Acting from the Steven Toast school that conveyed Rosmer’s anguish but struck few other notes.

This revival probably isn’t the revelation it needed to be to elevate this weird, haunting play into the crowded Ibsen first division. But it’s worth a look, and if you don’t catch it now it’ll be a long wait until the next one.