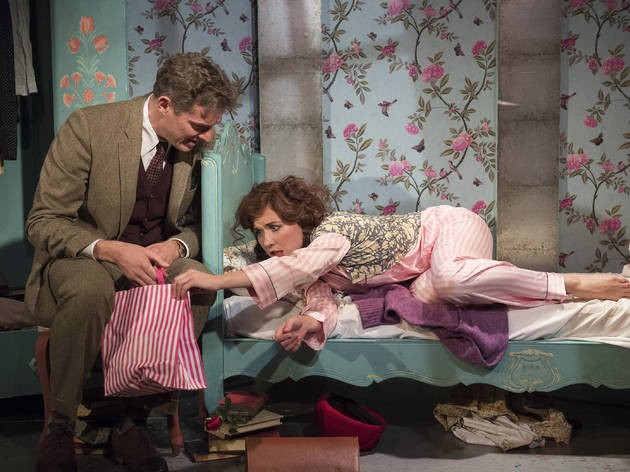 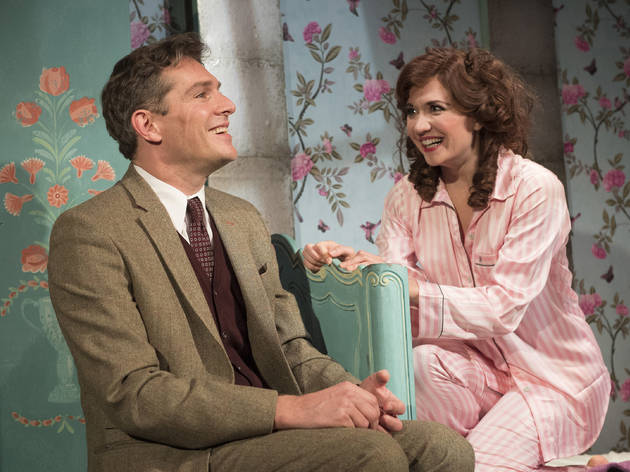 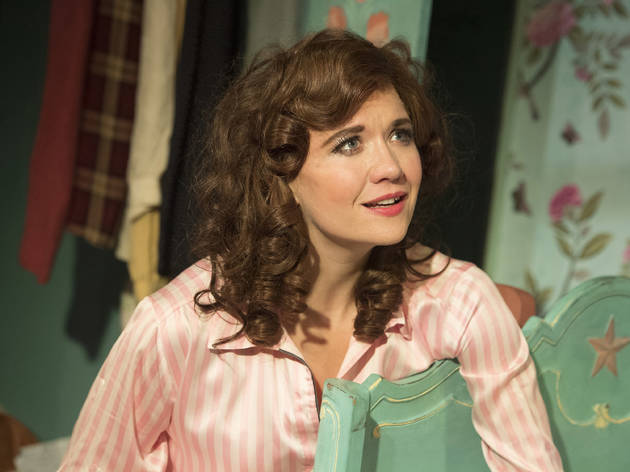 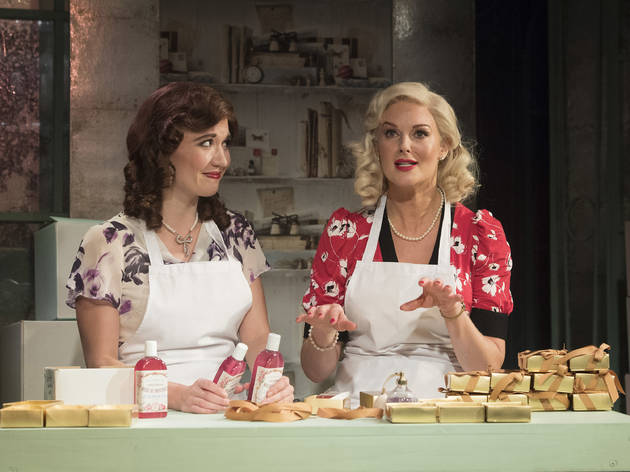 As Christmas shopping stops being ‘something you’ll do online’ and starts becoming a real and present horror, the Menier has revived a 1963 musical that puts a bowing, scraping and singing cast of store clerks at your service.

You can see why, especially in director Matthew White’s gorgeously giftwrapped production, set in designer Paul Farnsworth’s retro fantasia of pastels and gilt flourishes. And it’s well-stocked with endlessly inventive, pun-tastic lyrics and a memorable score, written by Sheldon Harnick and Jerry Bock – the dreamteam behind ‘Fiddler on the Roof’. But this is a rather frothier outlet for their talents.

It’s set in a perfume shop in 1930s Hungary where seasoned clerk Georg (Mark Umbers) is swapping anonymous romantic letters with new girl Amalia (a daffily simpering Scarlett Strallen), after she answered his ad in a newspaper column. Sounds familiar? It probably is. Miklos Laszlo’s play has also been adapted into Judy Garland vehicle ‘In the Good Ol’ Summertime’ and the Meg Ryan movie ‘You’ve Got Mail’.

You can imagine Julie Andrews pulling it all off with aplomb (she was originally slated to create the role on Broadway) and there’s a touch of Andrews-ish mumsiness to Strallen. Meanwhile Umbers is doing an excellent Rex Harrison impersonation that delivers on comedy but not on chemistry. They’re an unlikely enough couple, and Harnick and Bock’s songs don’t do much to bring things to a sizzle. As their romance finally gets on track, their scenes of stilted flirting are interspersed with a big group number about the stresses of Christmas shopping.

Underneath the tissue paper, there’s a tougher, spikier story just spiking through. Ditzy blonde femme fatale (yes, two stereotypes at once) Ilona, brilliantly played by Katherine Kingsley, has her heart elaborately stomped on. And kindly shop owner Mr Maraczek (Les Dennis in twinkly eyed mode) is driven to depths of despair that are glossed over by the book’s relentless jollity.

If its central pair of lovers are more like good friends, you can see why. This musical gets all its complexity from Harnick and Bock’s artful, witty score - if it’s real romance you’re shopping for, might I suggest ‘You’ve Got Mail’

She Loves Me is a sweet, romantic musical currently playing a short run at the Menier Chocolate Factory.

Based on the same plot that inspired “You’ve Got Mail”, it tells the gentle tale of two parfumerie clerks in Budapest who spar in reality whilst they fall in love via letter.

The songs aren’t particularly well-known, but are undeniably catchy all the same – from the quirky “Vanilla Ice Cream” to the titular “She Loves Me”.

This production is Budapest in name only, as a variety of regional UK accents dot the scene. The staging is lavish and colourful but small – the stage at the Menier is rather modest by London standards. The designer has achieved a great deal with the limited space.

The cast were extremely talented – the strength of the singing was a particular highlight. You may be surprised to find that it’s TV game-show host Les Dennis on stage; I didn’t realise until reading a review afterwards! The leads were charming, but it was Catherine Kingsley and Callum Howells who stole the show as fellow shop clerks Ilona and Arpad.

It’s a lovely, heart-warming evening out that feels deliciously old-fashioned. Fellow hopeless romantics will gobble it up. My only wish is that the two leads had a tad more chemistry, but despite that small hiccup I would gladly pay to watch it again.

She Loves Me is a cute romantic show which offered the storyline for the rom-com movie You've Got Mail. I hadn't been to a show at the Menier Chocolate Factory before and it's a very quirky theatre with lots of uneven old floor boards and simple furnishings. It's quite a small intimate performance space with kind of cramped bench style seating. I was sat in the front row and at points was just a meter away from the actors.

The story focuses on two people working in the same perfumery shop, probably sometime around the 1940's. They are both writing to a mystery lover without realizing that the other person they're falling in love with is right there under their noses. Although the production is relatively small scale for London, the sets are well done and the acting and singing are good. Many of the scenes are quite silly and I felt that a restaurant scene in the middle dragged on but overall the show was a nice a lighthearted story about falling in love.