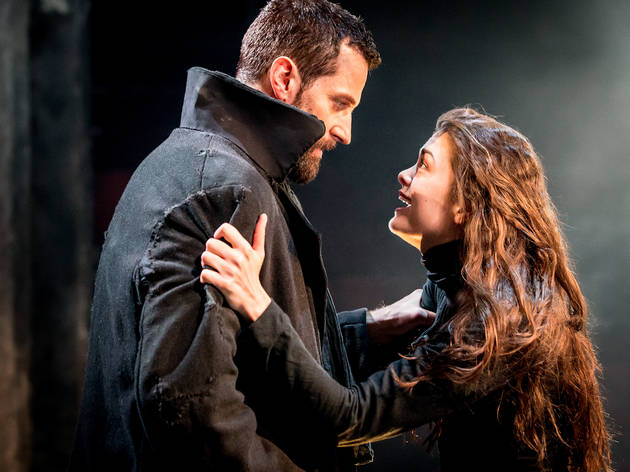 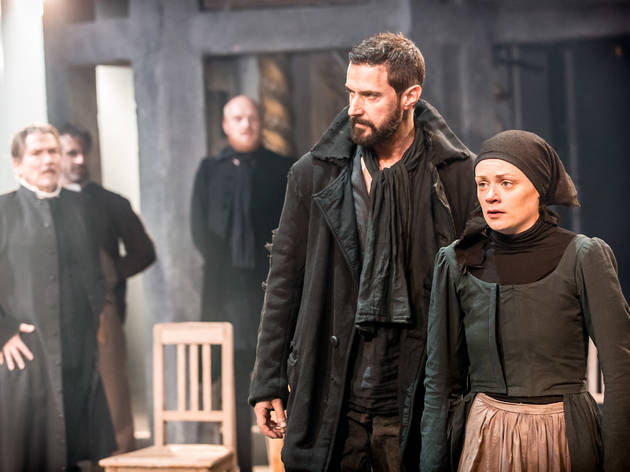 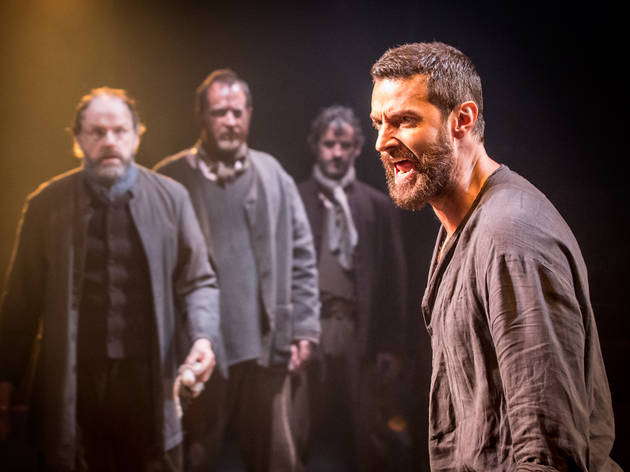 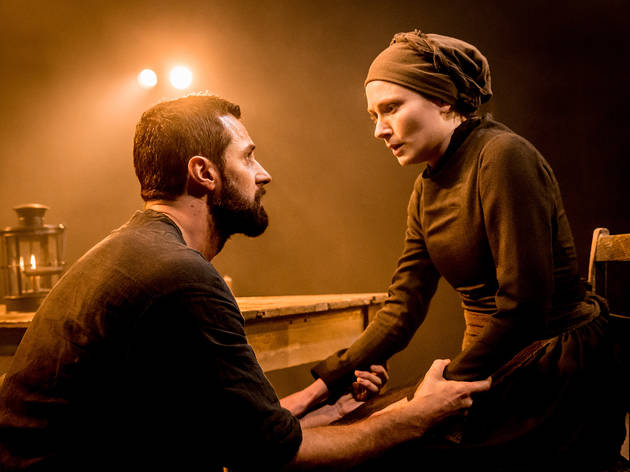 Three-and-a-half-hours engulf your soul like a black mass in this titanic, ritualistic production of Arthur Miller’s tragedy about the Salem witch trials from hot property South African director Yaël Farber. And yes, that is one heck of a running time, partly due to a clutch of wordless movement sequences Farber has inserted into the in-the-round production, most notably the audacious opening in which the entire, black-clad cast shuffle about the stage in a fug of incense like some apocalyptic rite (kudos to movement director Imogen Knight).

For the most part, Farber does nothing more revolutionary than provide Miller’s text the amount of space it needs: there’s no sense of time wasted, it’s more that every word has been considered and given its due weight, and there is a harshly beautiful ebb and flow to everything, a sense that the doom of this small Massachusetts town is closing in like clockwork. The speaking – in harsh Yorkshire accents – is painful, blunt and clear, Richard Hammarton’s unsettling string and drone-based score punctuates it perfectly, Tim Lutkin’s monochrome lights add to the feel of unforgiving Old Testament reality. Everything else is pared away – there’s austere period costume, but no set to speak of. This is a granite hard, precision cut, intensely atmospheric production that transcends the original context of the play – an allegory for McCarthyism – expanding it into a weighty examination of the human capacity for irrational hatred.

At the centre stands Richard Armitage’s John Proctor, a hard man in a hard world. Casting the sexy dwarf from ‘The Hobbit’ was always going to get a few bums on seats, but his flinty handsomeness and sheer, rugged presence is key: he is a driven, determined man, an unstoppable force, colliding with the immovable object that is the Salem community, whch has been stirred to murderous hysteria by a combination of petty grievance, superstitious nonsense, an unaccountable judiciary and a refusal to believe that the group of young girls naming townsfolk as witches may be lying. The scenes of courtroom clash are truly astonishing, every utterance by Armitage and witchfinder-in-chief Danforth (Jack Ellis) like an avalanche. And when the girls are called before the judge, their mock possession is truly frightening – the piquancy of horror is never far from the mix. And the gradual, painful thawing of relations between Proctor and his wife Elizabeth (Anna Madeley) is just devastating.

It is operatic, it is immense, it is – after the Young Vic’s ‘A View from the Bridge’ – the second definitive Miller production London has seen this year: the lengthy first half flew by, and yet I was grateful for an interval just to steady myself; by the end I was pretty much broken.