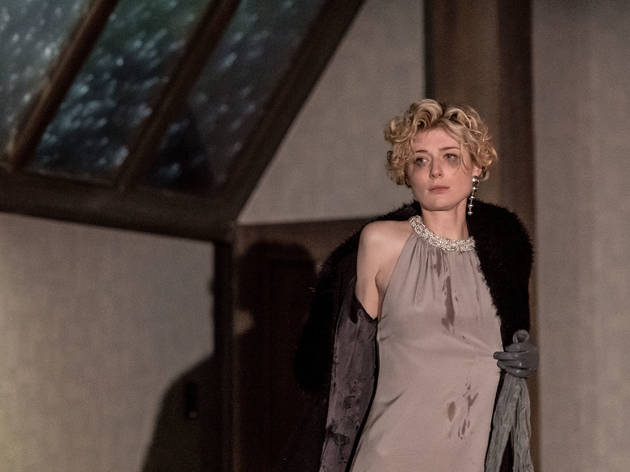 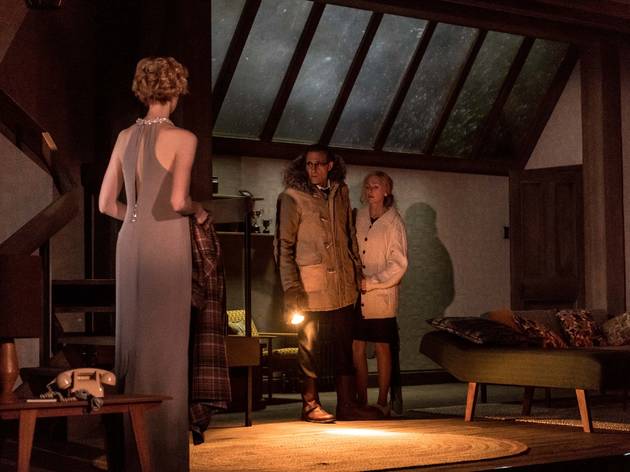 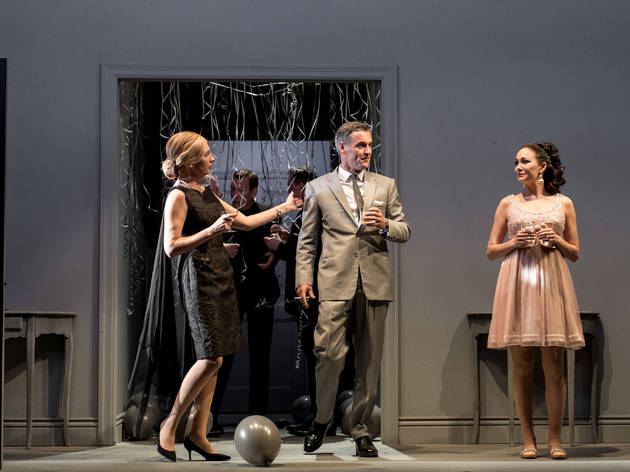 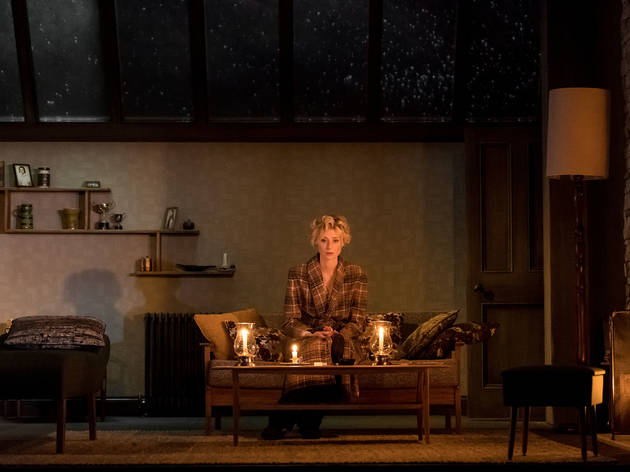 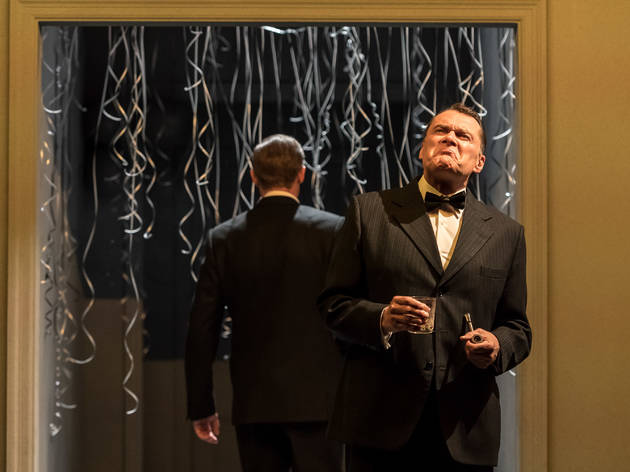 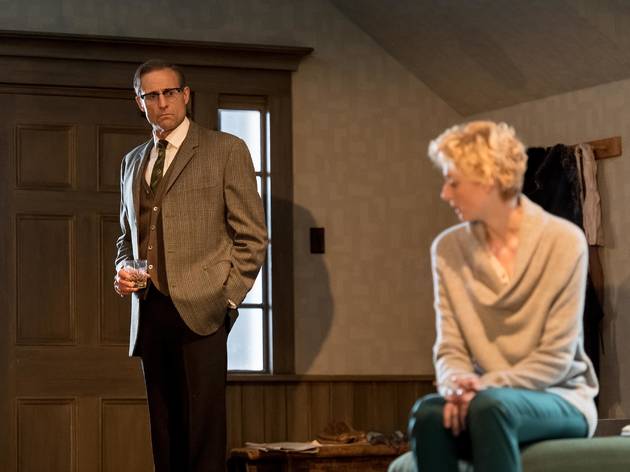 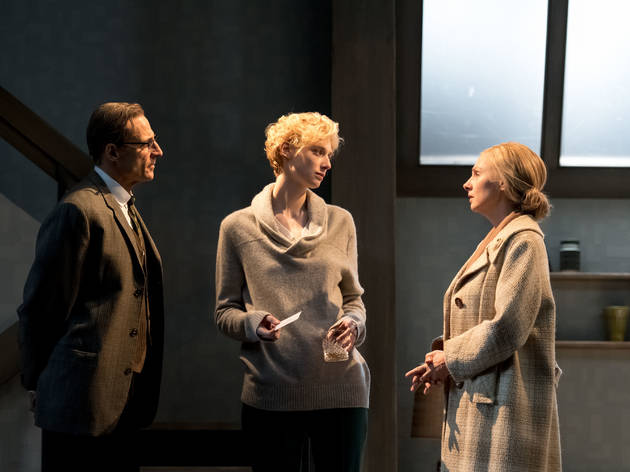 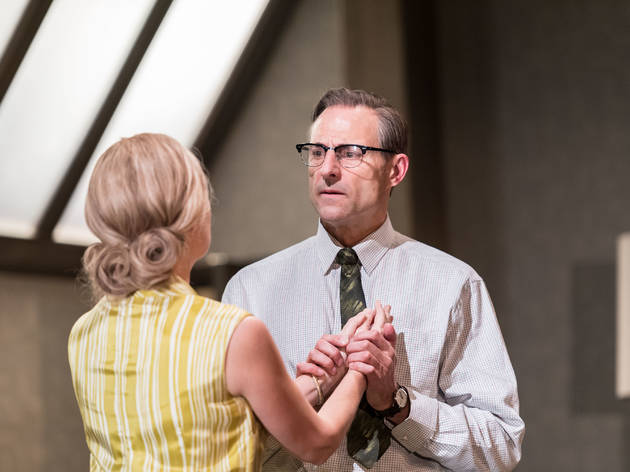 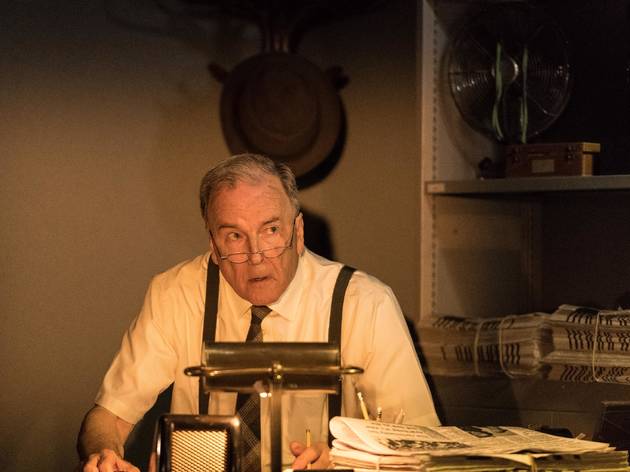 ‘The Red Barn’ is billed as a thriller. And it kind of is. Though if you’re hoping for explosions, gun battles or large numbers of aggressively exciting events you may start to freak out a bit when the penny drops that wunderkind director Robert Icke’s immaculately stylish production a) has none of these, and b) doesn’t have an interval. Instead it’s an unsettling study in masculine inertia, its exquisite stillness, bleak undercurrents and fascination with genre, sharing as much with the films of the Coen brothers – specifically 2009’s ‘A Serious Man’ – as the usual stage influences.

David Hare’s adaptation of a very obscure 1968 novella by prolific French detective writer Georges Simenon, ‘The Red Barn’ is, at first, a mystery about two couples – Ingrid and Donald Dodds, Ray and Mona Sanders – who head for the Dodds’s Connecticut house on a blizzard-lashed night only to discover that Ray has disappeared.

As ‘The Red Barn’ develops it soon becomes clear that it’s less about what happened to Ray, and more about what Donald did in the two hours he was out looking for him, and what those two hours mean for the rest of his life.

It’s a starry production, with Strong giving a quietly devastating performance as Donald, a man slowly, painfully coming to realise that he has spent a lifetime trapped by his own mediocrity, that he’s just a cog in the well-oiled machine of New England WASP society. But there is no pity to ‘The Red Barn’ or a sense that Donald has been hard done by: it is ruthless about his weaknesses and scathing about his awakening. Elsewhere, Elizabeth Debicki (‘The Night Manager’) is striking as the emotionally numb Mona. And US actor Hope Davis is understatedly excellent as Ingrid, whose manipulations are so subtle Donald half-doubts that they exist.

But the cast are all ultimately subsumed by Icke’s daringly slow production, which carries them on with impassively glacial force. ‘Cinematic’ is a word that’s flung around a lot, with varying degrees of meaningfulness. But this is as cinematic as theatre gets. Heck, it even has a title sequence, as the title is hesitantly typed out on a blizzard-drenched scrim.

Even if you hate Icke’s production – and some people will surely find its slow pace unbearable – you’ll have to admire the remarkable scene changes, where a moving gap in the screens pans like a camera, zooming in and out on the action, disorientatingly, sometimes playfully introducing us to a next scene that looks nothing like the last one. Designer Bunny Christie and an exemplary creative team have done a remarkable job, with stage manager Sarah Alford-Smith deserving massive credit for overseeing the transitions.

In a way, those transitions are the highest drama of the play, spiking its disquieting stillness and sly film noir nods with some startling old-fashioned stage magic. ‘The Red Barn’ will divide audiences, but if you can surrender to its crepuscular ebb and flow and wincing interrogation of masculinity then it will indeed thrill.