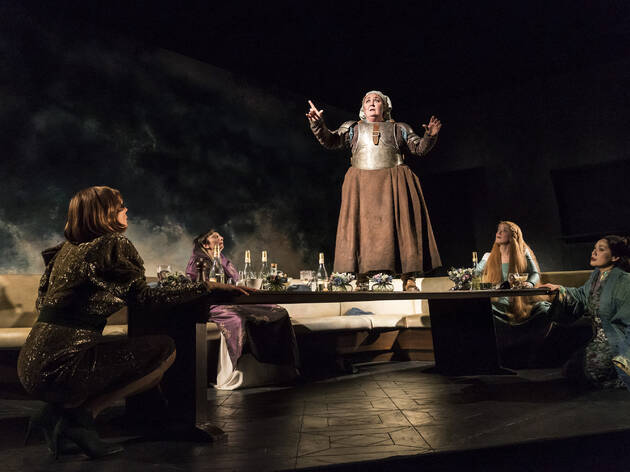 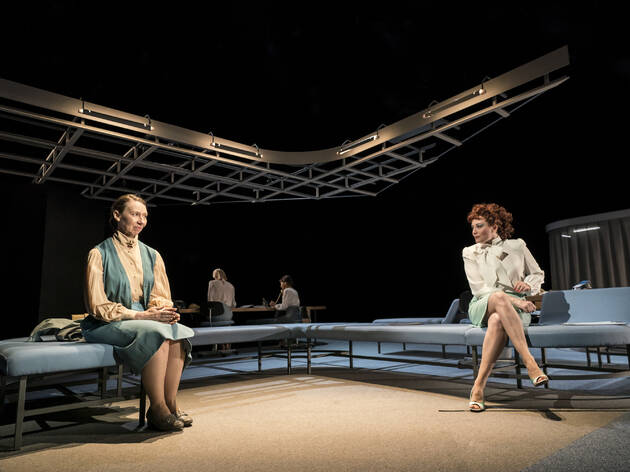 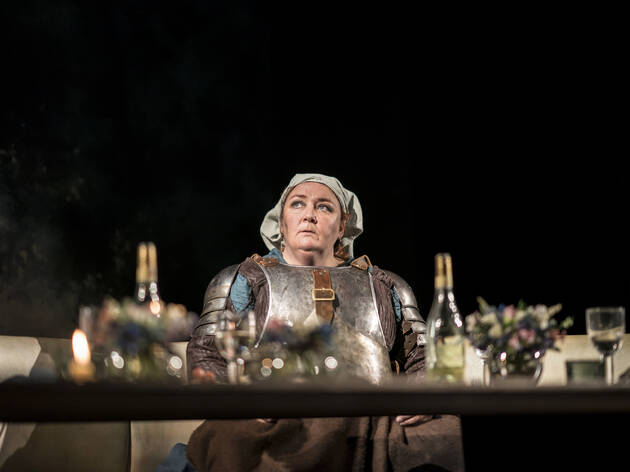 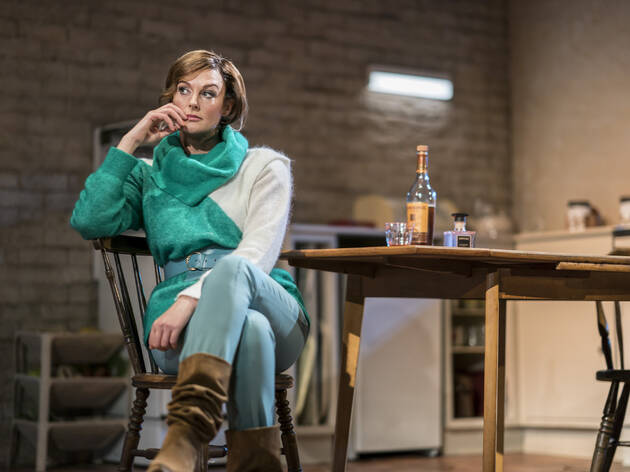 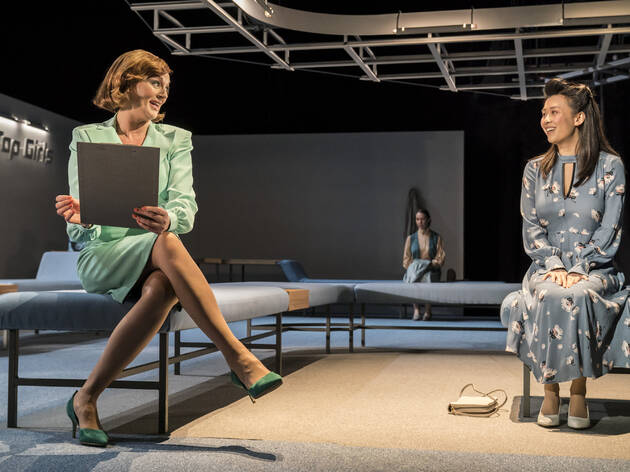 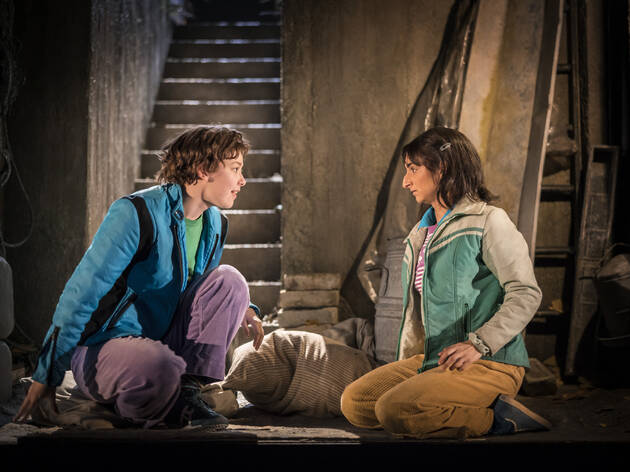 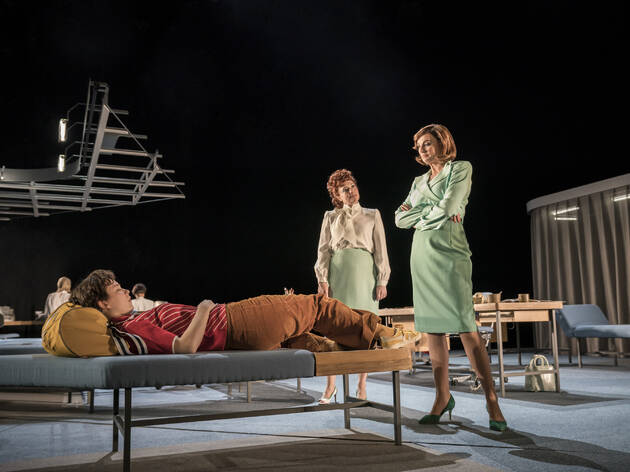 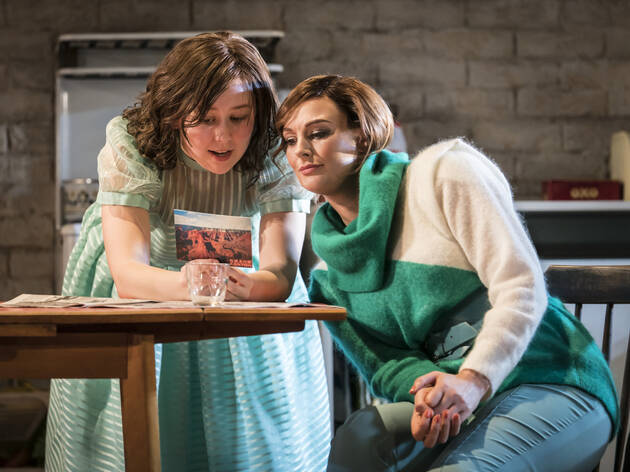 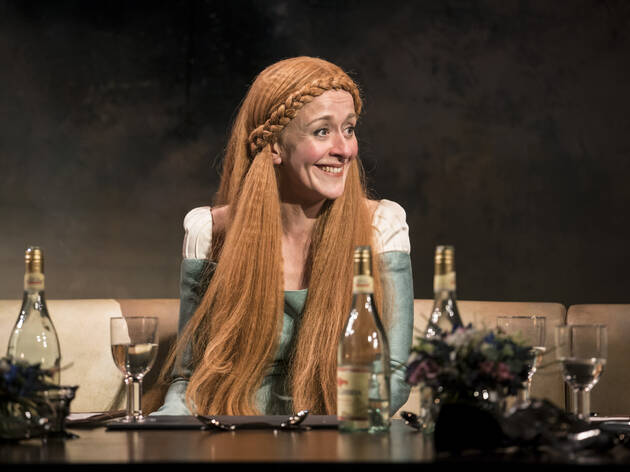 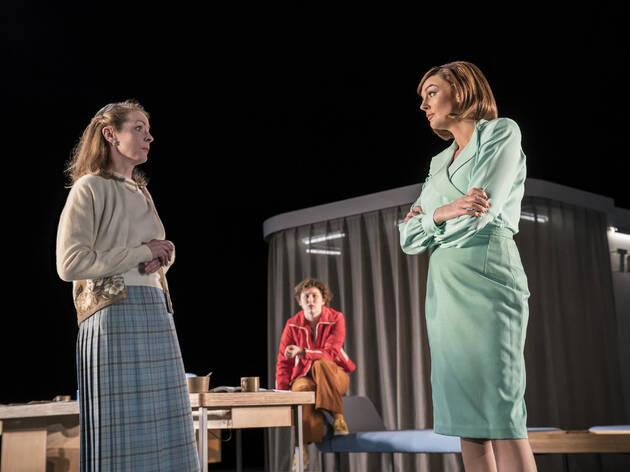 Recently, the National Theatre sparked a furious backlash when its latest season announcement included no new plays by women. This week, it opens a revival of a twentieth-century feminist masterpiece. This is a coincidence, and one doesn’t cancel out the other. But at the very least it’s handy timing.

Not that there’s ever a bad moment to stage Caryl Churchill’s ‘Top Girls’, which really doesn’t get staged nearly as much as its reputation suggests. Lyndsey Turner’s revival is only the fourth professional UK production ever, and by far the biggest. That’s basically ridiculous: an A-Level staple, ‘Top Girls’ is in danger of being more studied than seen. So this widescreen revival feels like vindication at last.

If you know the 1982 play, you’ll know it for the virtuosic opening scene, in which power-suited Thatcherite businesswoman Marlene (Katherine Kingsley) enjoys a boozy dinner to celebrate her recent promotion at work. Her guests are a series of women from history, both real (Victorian explorer Isabella Bird) and fictional (Pope Joan). It is, no question, a completely singular piece of writing. It is surreal. It is serious: each of the women has paid a terrible price for their success in a man’s world. And it’s funny: the dialogue is magnificent, as the women talk over each other incessantly, with all sort of politics, prejudices and microaggressions bubbling just beneath the surface. Compared to the other women’s epic exploits, there is something bathetic about Marlene’s workplace triumph – although as we’ll find out, there’s more to it than that.

But the dinner party isn’t the be all and end all of ‘Top Girls’. Turner’s production is probably the first in history to have the resources to not need to double the actors from the party scene with later roles. This is a good thing: it decentralises the party’s role in the play, gives the whole thing room to breathe more, and makes the excellent Kingsley’s brassy, brittle Marlene more the focus.

The rest of the scenes are more naturalistic, though there’s something dreamy about their non-linear juxtaposition. In scene two, set in rural Norfolk, Marlene’s tomboyish niece Angie (a likeably gauche Liv Hill) dreams of escape to the city. In the third scene, we’re at Marlene’s employer, Top Girls, an employment agency staffed by wilfully sharklike women. Interviews take place, each illuminating some facet of female ambition; Angie arrives to see Marlene; Marlene says something horrifying while Angie is asleep. Finally, after a very late interval, the final scene unravels the play, and Marlene.

Like a sculptor, Churchill carefully chips away at her protagonist’s story, taking her on a journey from blaring superficiality to quiet tragedy. And she also offers a wider contemplation of the interplay between feminism and ambition. If a woman sacrifices everything to triumph in a world run by men, with male rules, in which men are not required to make the same sacrifices, is it a triumph? Has she done it on her own terms or on somebody else’s? The play was very explicitly written in the Thatcher era, but I don’t think these questions have dated.

Last time Turner brought a Churchill play to the NT it was with a startlingly massive take on the more obscure ‘Light Shining in Buckinghamshire’. There is much less sense of a director – and designer – imposing herself on the work here. And rightly so, really: the vision is so specific and finely honed that you’d be an idiot to monkey with it. Maybe that’s one reason it doesn’t get revived that often.

But Turner’s care for the text shines through, and if there’s a raison d’être for this production – other than ‘Top Girls’ being generally awesome – it’s clearly the budget. The sweep from epic opening to intimate end is poignant and awesome, and there is something deeply impressive about seeing row upon row of women take their bows at the end. It’s ‘Top Girls’, given the production it always deserved.
Share Tweet