The next 1,000 or so words are brought to you by booze. Specifically, enough booze to screw up your balance, blur your vision and leave the horizon tilting like a seesaw under a Sumo wrestler’s bum. Because this article is about a collection of mysterious green wooden shelters that owe their existence to one thing: pissed-up cab drivers.

Or, more accurately: pissed-up Victorian cab drivers. In nineteenth-century Britain, pubs were where cabbies who drove horse-drawn carriages sheltered from the rain. Or bought hot food. Or did things like get so drunk on duty that, if you got in their cab, you’d be putting your life into the hands of someone whose driving was as trustworthy as Brian Harvey’s.

So, in 1875, a newspaper owner who didn’t fancy having his cab driver reverse over his own face decided to set up the Cabmen’s Shelter Fund – a charity dedicated to funding shelters that would let taxi drivers get some hot food and caffeine into them. And not get blind drunk.

There were originally dozens of the wooden shelters, all exactly the length of a horse and cart and featuring a brass rail for the horses to be tied up to. Today 13 of them remain – bright green, Grade II-listed chunks of London history that serve up super-cheap breakfast food so hearty that in 2015 we included the Hanover Square one in our list of ‘best bacon sandwiches’. Most people tend to pass them by, either thinking they’re public toilets or failing to recognise them at all. Not that it matters. You see, no one other than cabbies is allowed inside.

Not that this stopped me going and knocking on the door of one.

‘Of course you can come in, darling! It’s always nice to have the press here,’ says Tracy Tucker as I step through the doorway of her Warwick Avenue shelter. It’s 7am and there are already 54 sausages and 36 bacon rashers grilling ahead of the day’s service. There’s a tiny kitchen containing a small hatch through which takeaway customers are served (and where members of the public can sneakily bag themselves some grub). At the rear is London’s most exclusive formica counter: a U-shaped table where ten cabbies max can sit and eat what has to be the cheapest fry-up in London (£1.70 for a fried egg sandwich! 70p for tea!). Every regular has their own special football mug that Tracy serves their brew in. Frankly, I’m honoured to be the first person other than a cabbie to be allowed in. ‘Oh no, you’re not the first! We’re quite popular with media types!’ says Tracy, gesturing at the walls.

At the back of the shelter hangs a framed photograph of Tracy and Victoria Wood, after the late comic spent an afternoon there for a BBC One documentary on the perfect cuppa. Martin Parr once spent the day photographing Tracy (‘such a lovely man’). Anya Hindmarch, designer of bags for Kate Middleton, Angelina Jolie and Maggie Thatcher, once hired out the hut for an all-day long private event during which Tracy did fry-ups for Tom Parker Bowles and the editor of Vogue. One of the regular customers at this shelter is a genuine rock legend who Tracy refuses to let me name, but the mere sight of whom sends bystanders loopy. Are there any celebs who don’t get a warm welcome here? ‘Actually, I once kicked Jamie Theakston out for not having a cab driver’s badge.’

There’s nothing new about the upper crust wangling their way into cabbies’ shelters. ‘Back in the 1800s, nobles used to pay the cabbies in the Pont Street shelter to clear out so that they could go have their wicked way with prostitutes,’ says Jimmy Jenkins, who runs the Cabmen’s Shelter Fund.

In the 1920s, the Piccadilly hut became known as ‘The Junior Turf Club’ due to the huge amount of aristos who’d sneak in bottles of booze and have dinner there dressed in furs and tails. Back then, taxi drivers might find themselves dining with Ernest Shackleton, John Singer Sargent or the then Prince of Wales. And the latter sort of continues to the present day. ‘Yeah, Prince Charles used to stop into the Hanover Square shelter every now and again,’ says Jenkins. ‘He’s a big supporter of ours.’

Presumably the customer service can’t hurt this appeal. By 9am, the window’s seen a steady stream of cabbies and tradesmen, most of whom seem to be regulars. One punter orders a cup of tea, which Tracy serves him while hacking a sausage into chunks and dropping it into a paper bag (‘That’s for Mr Colin the dog’).

At one point a man turns up and is given a cuppa and two slices of toast. Tracy then chirrups: ‘Some of my special one, because it’s you’ and slathers on an Irish whisky marmalade made by a customer’s nan. When he walks off smiling, I realise that he hadn’t even asked for anything. ‘I don’t need an order. I know what my customers want!’ says Tracy.

The first cabbies start to arrive by 10am, at which point things become banter-tastic. ‘Who’s this photographer? You selling this place with a yuppie estate agent?’ There are stories about customers: ‘I had a pair of knickers left in my cab about eight years ago. Remember that phase when doing it in the back of a cab was like the Mile High Club?’ And throughout it all, Tracy slings phenomenal-looking omelettes and fry-ups, giving as good as she gets. ‘Here he is!’ she chortles at a recently retired cabbie. ‘How many episodes of “Homes Under the Hammer” you watched, then?’ Political debate (usually about the government’s handling of Uber) are broken up with shouts of: ‘No politics! It always ends in arguments!’ One cabbie turns to me, lowers his voice and says: ‘It’s like a ladies’ powder room: it’s where we come for a gossip!’

This, apparently, is the way it’s been for more than a century. In 1888, some gossip could’ve led to the Westbourne Grove shelter unearthing the identity of Jack the Ripper when a (shifty-eyed and obviously drunk) stranger confessed to the killings, only for the cabbies not to take him seriously (leading to plenty of column inches in the Telegraph).

But how many more years of gossip are left? The number of cabmen’s shelters has stayed constant for about 30 years. They’re able to operate thanks to the Cabmen’s Shelter Fund – which is a charity – subsidising their rent and battling local councils who are constantly trying to remove taxi drivers’ parking spaces (the one at Embankment is closed for exactly this reason – taxi drivers can’t park there anymore). Unfortunately donations to the Fund are proving hard to find. ‘I struggle for money now,’ says Jenkins. ‘I write a lot of letters to big companies, but we get few replies.’

In 2014, they tried to raise awareness with a series of events. A piece of artwork was displayed at the Embankment shelter featuring cab routes painted so that they looked like blood vessels (because: art). There were singalongs and plays held inside shelters. At one point, they turned a shelter over to English Heritage and had the cast of ‘Downton Abbey’ shipped down in a horse and cart to eat a fried breakfast with a competition winner.

It didn’t make a huge difference. Their biggest donation in recent years has come from Florida’s Universal Studios, after the Fund let them create two replica huts for a Harry Potter attraction, from which they sell ye olde English dishes of jacket potato and shepherd’s pie. ‘It’s funny,’ says Jenkins. ‘We can’t get English companies to back us but the American ones seem happy to!’

Back in Warwick Avenue, the shift is drawing to a close. Soon Tracy will shut up shop, but first she’s thinking of the future. ‘It’s a lot quieter than it used to be,’ she sighs. ‘There are just fewer cabbies. I do worry about there being no cab trade in the future.’ The idea of a world in which these lively little shelters sit silent and empty is a sad thought and, for a moment, there’s silence while this statement hangs heavily in the air.

It’s not a long moment, though.

‘Here Trace, how long does it take to make some cheese on toast?’ mocks one cheeky cabbie.

‘Oh, shut up you. We’re only here because you lot were bloody drunks!’

Get inside the mind of a London cabbie 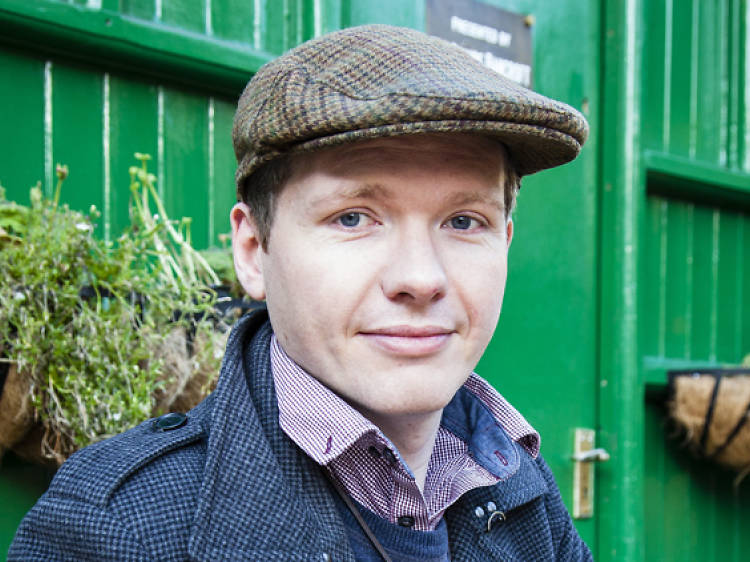 Things you only know if you’re a black cab driver

Secret codes, mad exams and costly careers: all according to Rob Lordan.