Ashley Walters: 'A lot of people love you, but there's jealousy too'

Direct from London’s mean streets, Ashley Walters brought power and depth to his role in TV drama ‘Top Boy’. What’s next for the rapper-turned-actor?

In March 2002, the 19-year-old Ashley Walters was at the heart of the drama surrounding his group So Solid Crew, Britain’s most banned pop phenomenon since the Sex Pistols. He was beginning a jail sentence for possession of a loaded gun. Eleven years on, everything has changed: confident, successful and at ease in a brasserie in Fitzrovia, the Peckham-born Walters considers his next steps in an increasingly impressive career that saw him touted as the first black Doctor Who this summer.

Life for his ‘Top Boy’ alter ego Dushane, on the other hand, has never been more complicated. We first met him on Hackney’s fictional Summerhouse Estate in 2011, fighting his way up the dealers’ ladder. As ‘Top Boy’ returns, Dushane is now the drug kingpin of Summerhouse. But uneasy lies the head that wears the crown…

Like Dushane, you had quite visible success when you were young. Is that a fair comparison?
‘Definitely. Dushane has set himself aside from where he’s working and can step in and out. I didn’t do that. I had overnight success with So Solid. Literally, one week I was getting single cigarettes from the corner shop, the next I was signing a £500,000 deal. I did the worst thing I could. I didn’t buy a house; I stayed in the same council flat. I bought chains and watches and a car. And I became a target.’

What should you have done?
‘I needed to be in an environment where I could concentrate on working without watching my back. It would be beautiful to be able to walk up and down Peckham still, because I love it; it’s where I grew up. But it just doesn’t work. There are a lot of people who love you but there’s jealousy too. I defended myself and everyone knows about that. But I’m 31 and I’m glad to be out of all that. I’m not a kid any more.’

Tell us about Dushane in 2013. How has he changed?
‘He’s sticking to his plans. Much as he’d prefer that there wasn’t all the violence and negativity surrounding what he does, he’s still trying to achieve his goal. This is not something he wants to do for the rest of his life. He just doesn’t have a clue how to take it to the next level. He’s got all that money, he’s the king of the ghetto, but what does that mean?’

Having money doesn’t seem to have widened Dushane’s horizons very much…
‘There’s a scene at the beginning [of the new series] where someone says to him, “What are you gonna do with your money?” and he says, “Buy some trainers.” There are only a few different outcomes for people like him. The moment you show weakness, someone wants to take you out, whether that means killing you or sending you back to square one. He wants to come out alive and that’s why he’s watching his back all the time.’

The first series coincided with the 2011 riots. Do you feel that anything has changed in London since then?
‘The riots affected me in that I realised how angry people were. They don’t feel like they’re being heard by the rest of the world. But I think something positive did come out of it. People realised that in numbers we’re more powerful. That’s not me promoting storming the Palace, or anything. If people put their minds together, they get things done. But I don’t think the authorities really listened. It just became a crusade to make examples of people.

‘It sounds like a cliché, but there really is nothing for people to do. The youth clubs are closed, libraries are closing. Where do you expect kids to go? That’s when the trouble starts. And they see someone with a nice car or whatever and that becomes the person they want to be. That’s what happened to me when I was younger.’

Now you’re older, what kind of dad are you? Do you worry about how things will be for your kids?
‘I’ve got a 13-year-old son who’s starting to hang around with older boys. And I get worried about him, because he doesn’t understand about the street and drugs and guns and stuff. But I’m quite liberal as a dad. I make a point of being honest with them. Lying isn’t the answer. The more you lie, the more curious they’ll be. If they’re going to have sex, I’d rather they do it at home where I know they’re safe.

‘As a kid, I remember sneaking out of my window at night or sneaking my girlfriend in. And it ended up with me having children at 17. I want them to know about what’s out there. And I want them to look up to me – my son’s 13 and he can find things out for himself, so I want to keep that dialogue open.’

Your own youth is catching up with you. Are you looking forward to the So Solid Crew reunion?
‘Yeah, because I missed out! I went to prison when they first started to tour. It’s a bit crap now that I’m married, because I can’t really have the same kind of fun. But it’ll be good to have the experience. We just did the IndigO2 and I cried afterwards. It was amazing – we were banned from most places, so there were people who wanted to see us and never could. The crowd was all ages, from 17-year-old girls to my mum’s age group and everyone in between.’

The black British actors who were breaking out when you were doing time, like Idris Elba and David Harewood, have ended up in the States. Is there still a problem with opportunities here?
‘Here’s my theory: I looked up to people like Lenny Henry and David Harewood. They were the kind of people who made me want to get into this. But they don’t write enough, they don’t produce enough and they don’t direct enough. Lenny’s production company put a film out called “Alive and Kicking”, where he played a guy coming off drugs. And it was one of the most cutting-edge UK films I’ve seen. And since then, he’s put out nothing much.'

'They should be the pioneers. I’d like to direct and produce and try and push things forward. It’s obvious that it’s more difficult for black actors than it is for white actors over here. So you can run away to the States or you can stay here and try to change things.’

Is that more difficult if you are typecast in gangster roles?
‘Well, when I start to direct, I don’t want my first film to be like “Bullet Boy” or “Top Boy” or something you’d expect. I don’t even read a lot of the stuff I get sent because it’ll be “AK-47” or “The Gun” or whatever!’

And you didn’t get the new ‘Doctor Who’ gig …
‘I heard I was 250-1! But the fact that it was even being mentioned means that people are thinking differently. I believe that things are changing; it’s just about us jumping on board and capitalising. You’re not gonna see me in “Downton Abbey”, but culture is changing.’

There’s a lot of London gentrification around the estate in the second series of ‘Top Boy’. As a Peckhamite, is that something you feel strongly about?
‘Wherever property is cheap, people are going to move there. People aren’t scared of the murder rate or whatever. In some ways it’s healthy. I go away to places in Europe or America and I feel uncomfortable; I can’t wait to get home. We are so multicultural and mixed up. Give it 20 years and there won’t be any people of one race any more. Everyone will have something else in them. I think that’s a beautiful thing.’

Read our review of 'Top Boy' 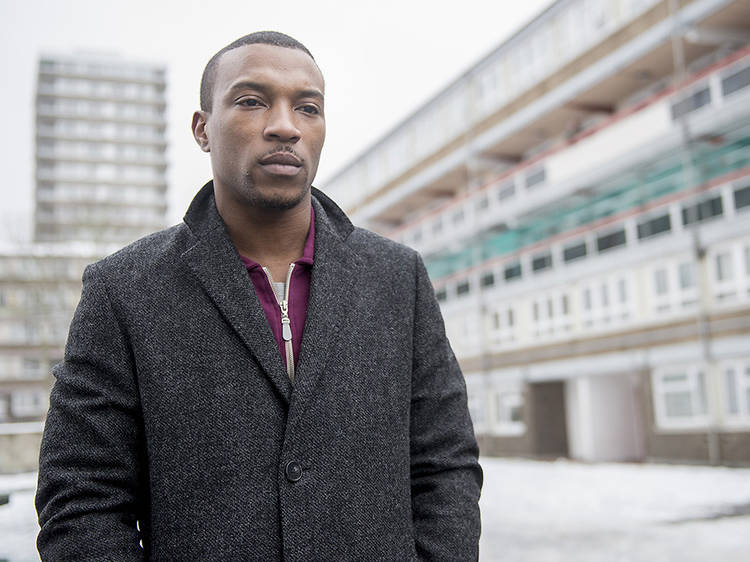 ‘Top Boy’ still feels like a striking and realistic slice of a certain kind of London life, maintaining a certain understated melancholy which sucks the gangster braggadocio clean out and leaves something altogether more thoughtful.