Freddie Highmore: ‘You know Norman Bates is going to be there at the end’

The British former child actor Freddie Highmore, who starred opposite Johnny Depp in ‘Charlie and the Chocolate Factory’ and ‘Finding Neverland’, tells Gabriel Tate about growing up to be a psycho killer in ‘Bates Motel’, the TV series prequel to Hitchcock’s classic ‘Psycho’.

Was it daunting or exciting to bring this iconic character to life?
‘Oh, exciting. There was pressure because you have all the “Psycho” backstory and Anthony Perkins’s take on Norman Bates was brilliant. But more of the pressure was from wanting to live up to the script’s potential. That storyline and vision, and chance to work with Vera [Farmiga, playing Norman’s mother], were crucial.’

What were the challenges of working with Vera in such an intense relationship?
‘We did work on it together – that becomes clearer as the show moves on, as Norman’s personality starts to split. This other side, this trance-like state he can’t control, is influenced by the words and thoughts of his mum. So we had to come up with a voice that was clearly hers.’

Do you remember first watching ‘Psycho’?
‘I was 13 or 14, which people think is a bit young. But there’s nothing explicitly wrong with seeing it at that age – it’s more about the psychological thrill and the suspense you build up yourself. That’s what we wanted to replicate in “Bates Motel”. It’s driven by psychological intrigue, as opposed to, “who’s Norman going to kill this week?”.’

Did you practice being Norman in front of the mirror for hours?
‘No, no – you come up with ideas, then run with them. The nice thing about doing a television show is that you can build on work you’ve done previously within the season and the show. With a film, you have to plan it out beforehand, because you shoot everything out of sequence. By going chronologically, you can see that progression.

‘And the best thing about being Norman Bates is, you know he’s going to be there at the end. It’d be a big surprise if they decided to kill off Norman, but all the other actors are looking around, going, “when am I going to be done in?”. Even Norman’s mum isn’t looking so good at the end of “Psycho”… ’

Did you find the American accent difficult?
‘No, I’d done it on a few things before. Although every character speaks differently, they have individual voices. Americans always refer to it as “losing your accent”, but it think it’s more like gaining one.’

Did you stay in accent between scenes?
‘As much as possible. Other Norman Bates traits, I left on-set…’

How weird does ‘Bates Motel’ get?
‘The basic story is: what made Norman Bates psycho? The nature vs nurture argument – was he always destined to become a serial killer, or was it his mother and the dodgy town they moved to? I often say “ Bates Motel” is a bit “Twin Peaks”-y, because I hear people say it. Although I haven’t actually seen “Twin Peaks”!’

Why are so many films being made into TV shows now?
‘It would have been impossible to do “Bates Motel” as a film, because you need the time to see his descent into insanity. And you can produce real quality in a short space of time on television now. It isn’t done cheaply any more.’

Does the final series end with the opening scene of ‘Psycho’?
‘I hope so. I’ve always seen that as the end.’

How do you juggle working with studying languages at Cambridge?
‘I’ve just finished my third year, which was abroad. The requirement is to spend eight months in an Arabic or Spanish-speaking country, so I did two-and-a-bit months before the shoot, then finished it off after the shoot in January. I’ll be back [in Cambridge] for my last year.’

How do your fellow students react to you?
‘They hide the kitchen knives now. I used to chop up the chicken, now I do the salad… But I’ve always been lucky to have a sense of normality – I never moved to America or lived in LA. But my family have kept me grounded – I see acting as an addition to my life, a hobby rather than a necessity.’

Read our review of ‘Bates Motel’ 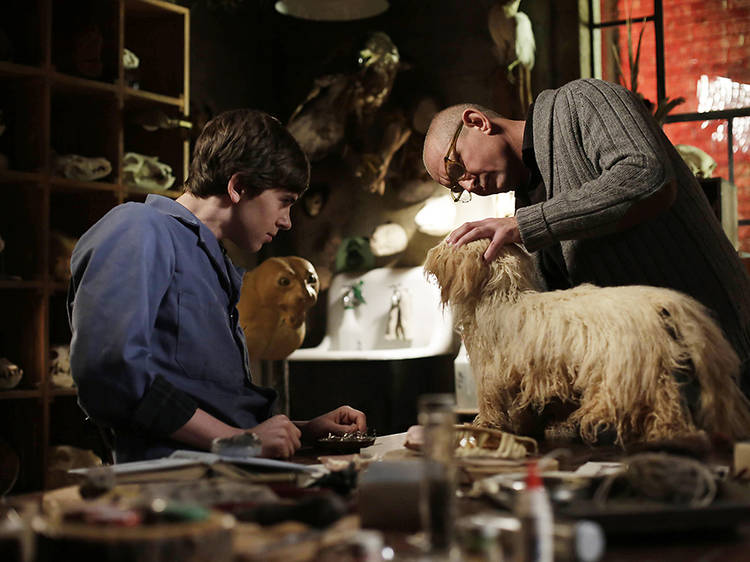 ‘Bates Motel’ has plenty to recommend it. The queasy psychosexual intrigue between Norman and his mum (Vera Farmiga) is played with skincrawling acuity by the stars, and the motel itself is brilliantly realised, ensuring that the 1950s hang heavily over the modern trappings that occasionally threaten to unbalance the tension.