A new TV series, a restaurant at Heathrow and a high-pressure Christmas dinner: Heston Blumenthal has plenty on his plate

Friday 22 November 2013
FacebookTwitterPinterestEmailWhatsApp
Advertising
Can anyone stop Heston Blumenthal? The Observer’s Chef of the Decade. A second Michelin star for London restaurant Dinner (his sixth in total). A new eatery opening at Heathrow’s Terminal 2. And now he’s filming a new C4 series, ‘Heston’s Great British Food’, in a castle courtyard just outside Cardiff, naturally. ‘He’d better not mess around with the beef too much,’ says one optimistic punter as Heston (like Gordon and Jamie, he’s a one-name culinary brand) spit-roasts an enormous rib of beef – which is formed out of five prize cuts of cow – inside a wrought-iron sculpture of a bull. Electrodes connect the meat to a laptop, so that the temperature can be minutely controlled with blasts of dry ice.

Can this ringmaster of test-tube theatre really have flunked O-Level chemistry? Well, Heston doesn’t really do failure – these are more like bumps on the road to world domination. Who now worries about the 2009 norovirus outbreak at his flagship restaurant The Fat Duck, or cares about Little Chef publicly ‘ditching’ the menu he was asked to revamp? Heston does, of course, but he’s too resilient not to bounce back. He’s also incredibly personable. Once he’s posed for the photos and signed the autographs – he’s a bit awkward with the on-camera patter, but a natural at pressing the flesh – he wipes his brow, adjusts his trademark glasses and joins us with a plate of quiche and salad to chew the fat.
Given all your different projects, do you ever worry about one of them failing?
‘Oh, yes. We’ve had some big downs. I thought the whole norovirus thing could have been it for me, and the restaurant might not have reopened. The only thing I’ve changed is that we’ve not served oysters since, which is really sad. You have to look at failure as an opportunity to learn.’

Have you ever tried to cook anything ridiculous that’s gone horribly wrong?
‘I spent four years trying to make savoury candyfloss. I know a lot about candyfloss now, but even more about flogging a dead horse.’

Are you a bit of a show-off?
‘It’s all a little bit self-indulgent, I’ll give you that. But the bizarre thing is that I really lacked confidence at school. When I started doing TV, I remember filming in a pizzeria in Naples and wanting the floor to open up and swallow me. But doing TV helped me become more confident. And I’m starting to get more confident in my cooking now. It’s taken me about 20 years.’

It’s hard to believe you could do some of your early jobs – debt collector, photocopier salesman – if you weren’t confident.
‘Oh God, the photocopier salesman! I was awful at it and I hated it. Who buys a photocopier from a cold caller? It’s weird, given the confidence thing, that I went down the path of multisensory cooking. No one had ever done anything like it, so some people loved me, and other people thought I was the devil. I took some batterings and took it really personally. I could have sunk or swum. I swam.’

You seem like the antithesis of the stereotypical shouty chef. Have you always been this chilled out?
‘Not at all [laughs]. I used to have a real temper on me and did a lot of work on it. It was realising you have to take responsibility as a boss. If you shout at someone for making mistakes, then it’s your fault – either you employed the wrong person, you’re expecting too much of them or you haven’t trained them sufficiently. I haven’t even thought about raising my voice for ten years.’

Where did the temper come from?
‘My lack of confidence. Conflict made me uncomfortable, so I’d ignore it or deal with it too aggressively. Since curbing that, my confidence has improved. And I try to exercise eight to ten hours a week, otherwise I’d get jittery as well as being the size of a house. I’m way more relaxed now than ever.’

But still very busy. Do you worry about spreading yourself too thinly?
‘Sometimes. But consistency is the most important thing – it doesn’t matter how many things you have going on, as long as the quality doesn’t dip anywhere along the line.’

Do you mind the idea of people rushing through one of your meals to catch a plane at Terminal 2?
‘No, I always wanted The Fat Duck to be accessible – I wanted everyone else to be as excited as I was about this new approach to cooking. But the Duck is expensive and hard to get into; it’s become a bit elitist, which was the last thing I wanted. That’s why the first book I did was called “Family Food”, and why I got involved in Little Chef. T2 already had the smoked salmon-and-champagne side covered, so I wanted to get involved in burgers and pizza.’

Do you ever indulge in a burger or a kebab?
‘I love a wet, sloppy pizza. And a lamb kebab, though the last time I had one was three or four years ago. My son got one from the takeaway and I took a bite: so wrong and so right all at the same time. But I can’t go there now; I have to try and be healthy.’ Are you political?
‘No. To be honest, I haven’t voted because I don’t have an opinion.’

What do you mean?
‘The line between left and right is more blurred than it’s ever been. The choice isn’t there. You should vote if you understand what you’re voting for. You shouldn’t vote just because it’s what your parents did. But I’m not really the best person to talk about politics.’

Some food shows, like ‘Jamie’s School Dinners’ and ‘Hugh’s Fish Fight’, actively engage with it.
‘The campaigning programmes have been for great causes, but they can make people feel guilty about not being able to buy free-range chicken every week. It’s about being realistic, making small changes if you can.’

Do you think that you can suck the emotion out of cooking by applying too much science?
‘What do you call too much science? If you’re being a purist, man would only ever cook over a fire. It’s not the equipment or the science, it’s what you do with it. I just love things that trigger an emotion, smells and flavours you’ve forgotten. That’s the stuff you want to bring into cooking.’

Is there a food you wouldn’t be able to reinvent?
‘C4 would love me to reinvent chocolate, or salt… Nothing I’ve done has been designed to shock. If I can justify why I’m doing something, fine. Some things just work. Although, in the process of saying you can’t do something, you can start to wonder…’

Is the pressure greater on you when you cook for guests, or on them when they cook for you?
‘Me. I only realised this last year. Young chefs can be a bit cocky and criticise other people. For me, sitting round a table at someone’s house and having someone cook for you – it’s a real treat. I’m easy to cook for. But what happens if someone comes to my house and I just give them bolognese? They’ll wonder why they can’t eat the bowl.’

Have any of your kids shown signs of following you into the kitchen?
‘When my oldest son said he wanted to be a chef, I told him the only reason to go into cooking is because you want to cook, not to make money or be famous. He’s in his second year of a culinary arts degree and he’s flying. The teachers just called him “Jack” at first, so people didn’t realise [that he was a Blumenthal]. He’s there on merit.’

You’ve kept your family separate from your work.
‘I’ve been asked to film at home with the kids several times, and always said no. As long as people are aware of the boundaries, they stop.’

Are you cooking Christmas dinner this year?
‘Yeah, I love cooking at home. You can be sociable while you do it. It’ll be a traditional roast, although chicken rather than turkey. And it’s the one time of the year that I go decadent, so I’ll have some white truffles as well as all the trimmings. The real downside is that Christmas shopping at Waitrose takes about three hours. People always comment on what I’m putting in my basket: “Ooh, look! He’s bought a pork pie and a prawn cocktail!”’ 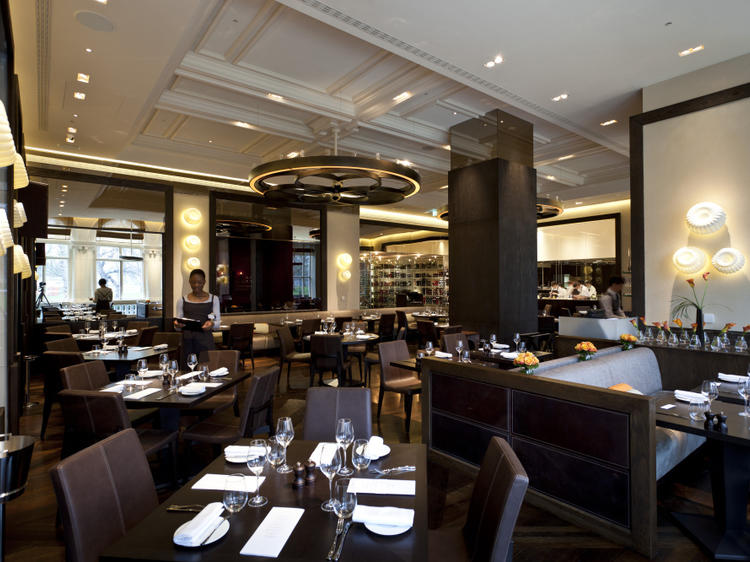