The Welsh actor talks about sex and the man he plays in 'Masters of Sex', whose research revolutionised attitudes in 1950s America

Michael Sheen may be best known for his performances as Tony Blair ('The Deal', 'The Queen', 'The Special Relationship'), David Frost ('Frost Nixon'), Kenneth Williams ('Fantabulosa!') and Brian Clough ('The Damned United') but, with William Masters, he has found an altogether less flamboyant public figure to play.

In 'Masters of Sex', his first major TV series, Sheen stars opposite Lizzie 'Mean Girls' Caplan as the American gynaecologist whose pioneering research changed the attitudes to sex forever and wrought a permanent change on the emotionally distant man at its heart. Here, Sheen talks to Time Out about the roles that have defined him, his own views on sex and how he won over his biggest sceptic in the 'Twilight' trilogy.

How would would you describe Bill Masters?
‘There’s the real man – who, even when he died, people said that was a very difficult man to know – and then theres’s our version. Our version is a man very much at odds with himself, a man who’s recreated himself in order to be able to handle a very controversial subject. He’s exerted a huge amount of control over himself, his environment and his life so it’s very difficult to get a sense of what’s going on underneath – the story is what happens when he starts to lose that control.’

Is it an intimidating prospect?
‘Yeah, for lots of reasons. The standard of episodic drama in America has risen dramatically, so the bar’s higher than it was 15 years ago. And I was wary of playing the same character for a long period of time, but in practice it’s the thing I’ve enjoyed the most. The scripts were being written as we were shooting, so the writers were exploring him at the same time as me. It was very collaborative and the nature of the format, of telling a story over 12 hours, allowed us to reveal layers of complexity over a longer period. ’

David Frost, Tony Blair, Brian Clough and Kenneth Williams could all be defined by their ambition. Does Masters fall into that category?
‘Definitely. He’s drawn to this sex research project for two reasons. No one had done actual physical research before, so it could be the making of him, but also the breaking of him as well because it was very risky and controversial. There was also a lot of himself that he had locked up and didn’t want to face: things in his past that we start to get a sense of as the season goes along. I also think he unconsciously knew he couldn’t keep this subject separate from anything messy like emotions or intimacy – that he would have to change as a human being to deal with what he was exploring. It’s an interesting conflict. ‘

Do you struggle to keep the personal and professional separate?
‘You’ve got to have a more fluid sense of self, the ability to change and adapt really to be able to do this job. But the amount of work that goes into these projects… it’s not something that you take on and off like a suit of clothes. It can take a while to switch off.’

Did it help that people were less familiar with Masters than with, say, Blair or Frost?
‘There wasn’t that same pressure, so I didn’t feel the need to have the same preparation – it was more about the imagination. In playing people like Frost or Blair, it’s more about getting the audience to feel comfortable with you playing that person and gaining their acceptance. I don’t think people are coming to this with the same expectations.’

Does acting in a series like this cause you to revaluate your own attitudes towards sex?
‘I can’t really say it’s made me revaluate anything. You’re constantly reminded that the greatest challenge we face is how you negotiate vulnerability with another person. The more vulnerable you make yourself with someone, the more connected you feel, the more intimacy you feel, the more you fear that being taken away. It’s so complicated and difficult. Inevitably, in trying to look at sex and sexuality you keep coming back to dealing with intimacy – it certainly makes me more sensitive to that.’

As an LA resident, does America feel sexually liberated?
‘There are all kinds of double standards about sex and sexuality, in terms of the way sex is used to sell things, the commercialisation of sex and how complicated that makes it – especially for women in terms of the way female sexuality is exploited. It’s almost a reverse of how it was in the ’50s, when so little was talked about and there was very little information. Now we’re overwhelmed by images of sexuality, so it’s hard not to feel like there’s some perfect version of sex and sexuality and that, if we’re not living up to that, there’s something wrong with us. That can be as dangerous as not knowing anything.’

Given all the sex scenes, you must have been keen to avoid anything gratuitous or titillating.
‘Absolutely. It’s difficult to do a TV series where sex plays such a huge part without portraying sex, but it can’t just be perfect people having perfect sex. I would be very disappointed if we added to the mythologising of sex and idealisation of sex rather than finding a way to explore the subject where people can relate to it and feel included.’

Do you find the bigger event movies like ‘Twilight’ or ‘Tron’ as satisfying as these more intense character pieces?
‘Satisfying in different ways, I suppose. When you’ve worked on a character who’s based on a real life character, then pure fiction can be very freeing – I thoroughly enjoy letting my imagination run a bit wild.’

Have you had much contact with the ‘Twilight’ superfans?
‘My daughter’s a “Twilight” superfan, but on the whole people don’t tend to recognise me from that. I look very different and it’s a much younger audience who aren’t as aware of anything else I’ve done, so there’s a level of anonymity for met which is different to a lot of the other people in the films.’

Did you live up to your daughter’s expectations?
‘She always thought the character was bald, so I was a huge disappointment… But I think she really enjoyed it. At first she was a bit annoyed, because it was her thing and you never want your parents to be into the thing that’s your thing.  But then there were a few added bonuses like going to the premieres and meeting the other actors – she got over it!’

Was ‘The Passion’ [Sheen’s secular passion play, staged in Port Talbot] your most personal project?
‘Absolutely. My mother was in it, my father was in it, my teachers were in it, it was in my home town, Elements of my life were incorporated into it from when I was about ten. It took place in the shopping centre where I had lunch in every day when I was at school. It was an extraordinary experience to be a part of.’

What’s next?
‘It’s been difficult after “The Passion” and ‘Hamlet’, which was very personal in other ways. They were so meaningful that I’d really like to do more personal things. I’m writing stuff myself now, so that’s probably the area that I’ll explore next.’

‘Masters of Sex’ starts Tuesday October 8 at 9pm on Channel 4.

Read our review of 'Masters of Sex' 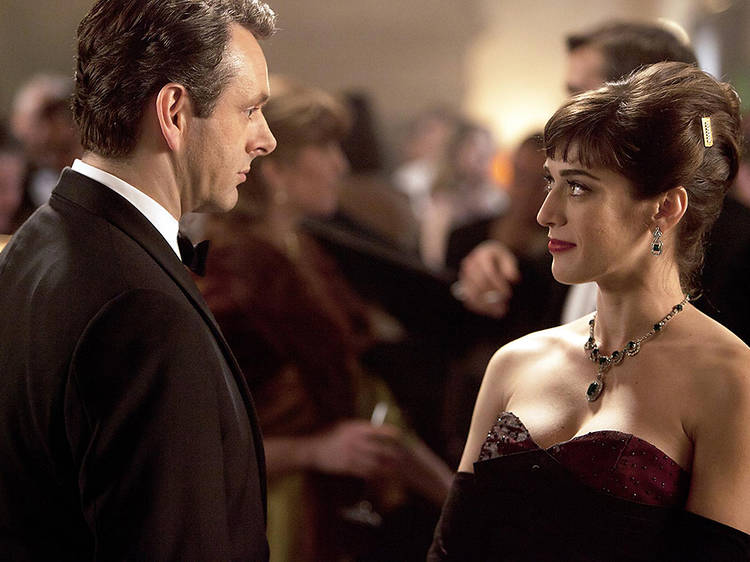 Tue Oct 8, 9-10.15pm, C4 Series one, episode oneYou’ve probably heard of Alfred Kinsey – bow-tied sexologist of the 1950s who revolutionised attitudes in America. But there was also William Masters, whose interest may have been a little more gynaecolgical but whose findings were no less explosive and personality no less peculiar. In this series from Showtime, Michael Sheen takes the title role of Masters – an emotionally remote oddball with a loving wife and a keen new assistant (Lizzie Caplan) – who gets involved in an area where emotions run wild. Where his critics saw smut, he saw science, and ‘Masters of Sex’ carefully steers a path between the two – this is neither drily academic nor gratuitously dirty. In spite of superb work from Sheen and Caplan, however, it occasionally lacks sparkle. Perhaps we’ve been spoilt by the glamour of ‘Mad Men’, for 1950s Missouri is inevitably a browner, duller place than Madison Avenue. But it’s sometimes hard to see where the dramatic tension will be mustered for a full series. Today's TV highlights Unreported World: Afghanistan’s Hunted Women This is the twenty-fifth series of C4’s evergreen Friday evening buzz-killer ‘Unreported World’. Which can hardly be considered auspicious news for the human race – evidently we keep on churning out an inexhaustible supply of grim news stories with our usual facility. Still, we’re glad someone keeps reporting them even if, as always, the scheduling seems peculiar.