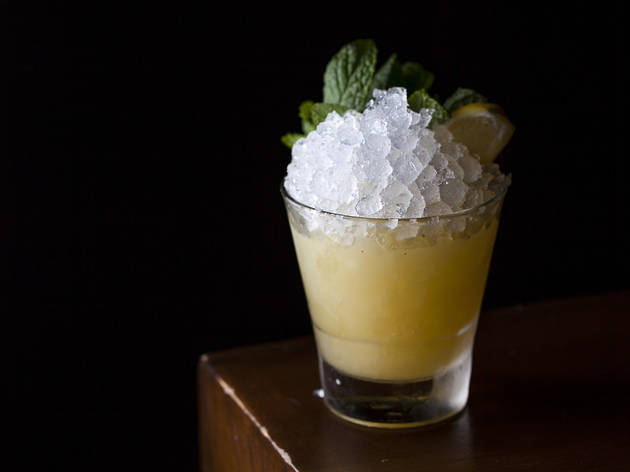 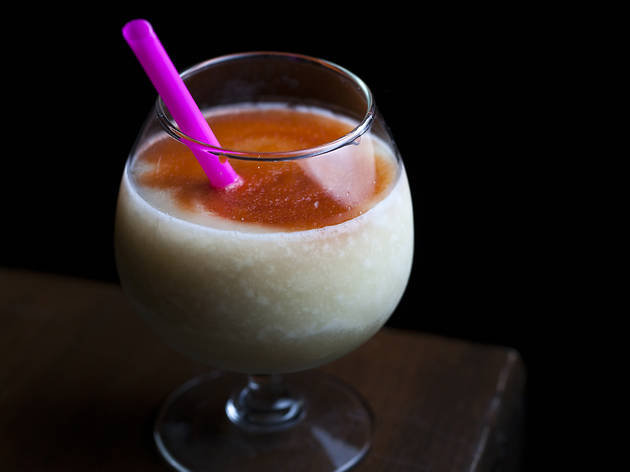 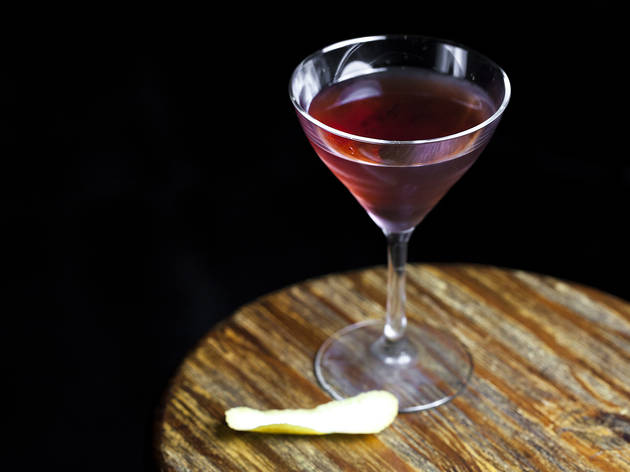 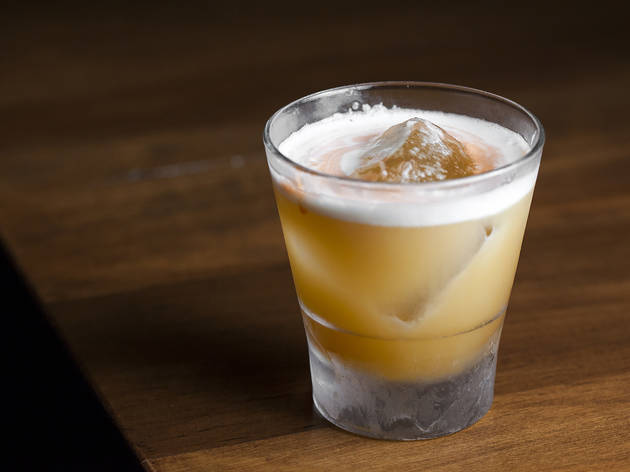 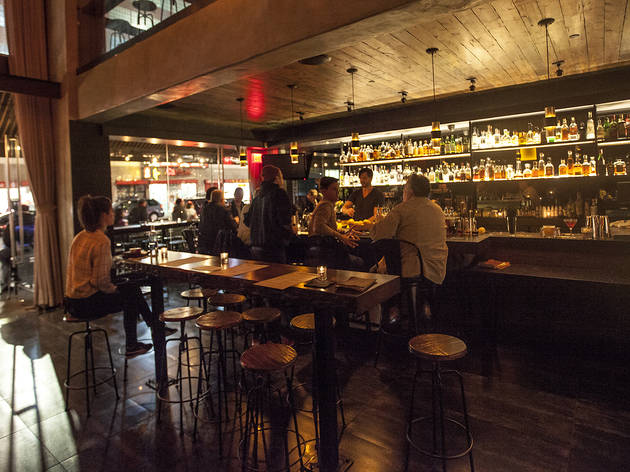 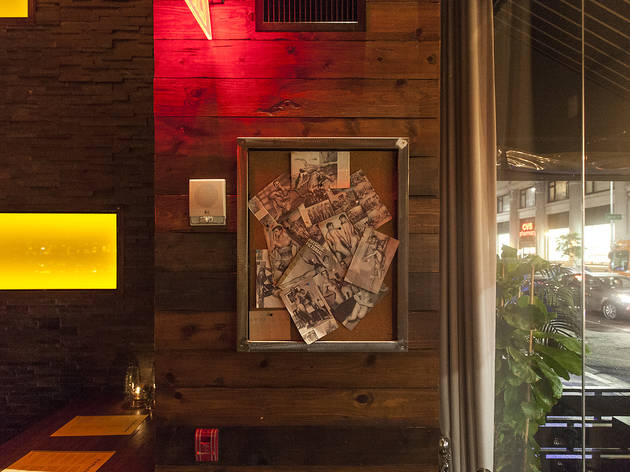 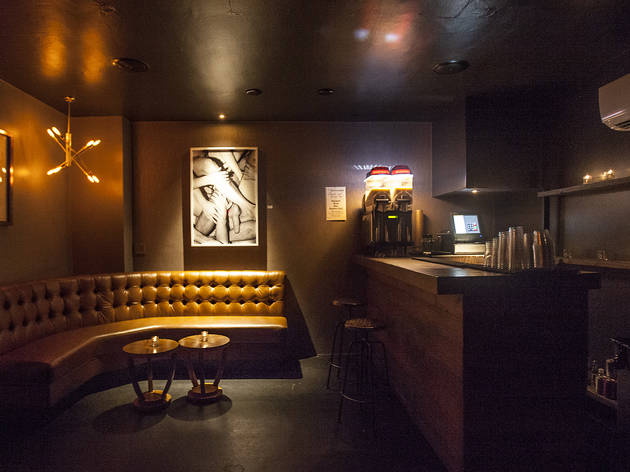 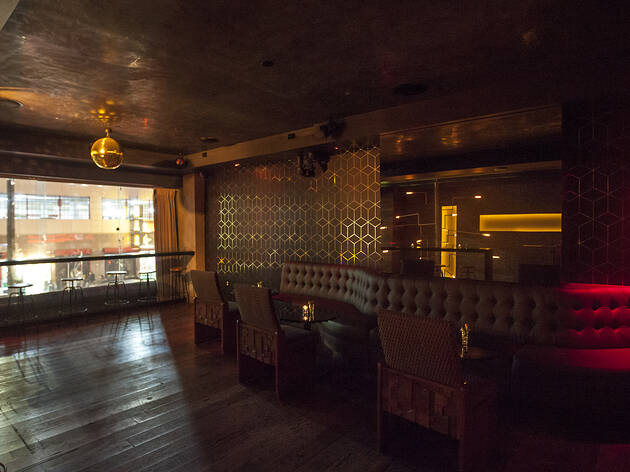 Start your night Downtown at this classy gay bar, where strong cocktails and a relaxed vibe make for an ideal first stop on your crawl.

Make no mistake about it: Bar Mattachine is not the place for debauched revelry. There are no half-naked pole dancers and neon intoxicants, but there aren’t long lines and rude bouncers either. This unassuming lounge wedged between a hummus restaurant and an alley boasts dark wood paneling, lighting that makes everyone look fabulous and avant-garde artwork, but it's the well-executed cocktails that make Mattachine worth a stop on your Downtown crawl. Barman Garrett McKechnie brings his 1886 Bar chops, a sense of humor (Bitter Queen, a frozen drink, is deemed “not as bitchy as she looks”), and a touch of LGBT history to the menu—only befitting of a bar that gets its name from a pioneering gay society that arose in the ‘50s. Find your place upstairs or down and bathe in the Edison bulb glow with a stiff Harry Hay (Mattachine Society’s founder and McKechnie’s take on an Old Fashioned), then cruise away.

Good for: Handcrafted cocktails, hunky barkeeps and a vibe that’s downright classy. It’s not too loud here and there's plenty of space—two stories worth of lounge seating, in fact. Compare notes around communal high-tops downstairs or slink upstairs to boogie down on a small dance floor. A rotating roster of DJs spin on weekends, when the frozen drink-induced dance party—albeit tame compared to some other gay bars in the city—gets in full swing.

The scene: The Mattachine Society welcomed gay and straight members alike, and that’s exactly the clientele at Bar Mattachine. Hip Downtown dwellers of all persuasions head over after work or before the clubs for a casual drink and prolonged conversation. It’s also fast becoming one of those secret hangouts for Hollywood types, as evidenced by former boy bander Lance Bass’s recent visit.

Drink this: The Harry Hay ($10), a rye-forward ‘tail featuring sweet vermouth and maraschino liqueur topped off with caramelized lemon oil and a maraska cherry, is the resounding fan favorite. It’s meticulously crafted and also deceptively strong. Same goes for the Bitter Queen ($9), which is basically a mojito slushy that's not only easy on the eyes, but as refreshing as it gets (read: ideal for warmer weather). For something stiff and slightly tropical, opt for the mezcal-based Hartwood ($10). The smoky flavor is balanced with sweet, fresh pineapple juice and sour lime. It requires a vigorous shake, which is where the sleeveless, sculpted bartenders comes in. And for some major liquid courage, order The Reconditioner ($14)—so boozy, there's a limit of two per guest. Not only is this libation of rum, bitters, fresh pineapple and lime juices utterly delicious and exquisitely balanced, but the description in typical McKechnie fashion is hilarious: "If you're straight, this drink will definitely turn you gay."

Our tip: Check the bar’s Facebook page for DJs and theme nights, and don’t miss their daily late night happy hour, 11pm-2am, when you can find a $6-$7 nightcap of the barkeep’s choosing. One last thing: it'll be hard to miss the in-your-face photograph near the second-floor bar (Hint: it’s of an erect penis).