It's hard to keep up with all the restaurant and bar openings, closings, chef swaps and revamps that happen every day in this city. What's worth spending your money on and what's all just hype? We're here to help you out with that. At the end of each month, I'll give a recap of the most exciting additions to enter LA's dining and drinking scene, whether it's a new ice cream shop or a creative cocktail bar. Here are a few February openings that are worth a visit:

Winsome (Echo Park): The stunner that is Winsome opened up earlier this month in Echo Park, starting with breakfast, lunch and coffee service. Chef Jeremy Strubel (Rustic Canyon) and pastry chef Leslie Mialma (République) are behind the project, which boasts a beautiful counter and a mural of Echo Park. Dinner and drinks will be introduced soon.

Officine BRERA (Arts District): There's been an insane number of restaurants and bars opening in the Arts District lately, and this month brought Officine BRERA into the mix. As the sister restaurant to the Factory Kitchen, BRERA features regional, Northern Italian food like spit roasted poultry, grilled fish and risotto.

Sack Sandwiches (West Hollywood): Michael Voltaggio has revamped his beloved ink.sack sandwich brand to include Sack Sandwiches on Sunset Boulevard, a casual shop where you'll find a few of Voltaggio's staples—like his exceptional banh mi—and some new menu options. Plus, Straus Family Creamery milkshakes, Boylan's fountain soda and Stumptown Nitro cold brew will be available for pairing. Sounds like a perfect lunch to us.

Spring (Downtown): The 6,000-square-foot space that opened up behind Church & State has been a long time coming, with chef Tony Esnault manning the open kitchen alongside chef de cuisine Enrique Cuevas and pastry chef Gregory Baumgartner. Seafood, vegetables and light French fare dominate the menu, along with some inventive cocktails from Bar Bouchon's Adam Flamenbaum.

Did you miss our favorite openings from January? Check out the list from last month. 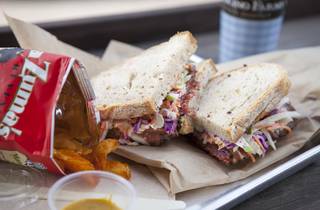 See the best sandwich shops and sandwiches in Los Angeles

Erin is the editor of Time Out Austin. She eats an exorbitant amount of sugar and has zero cavities. Take that, Mom. Follow her on Instagram at @erinito.