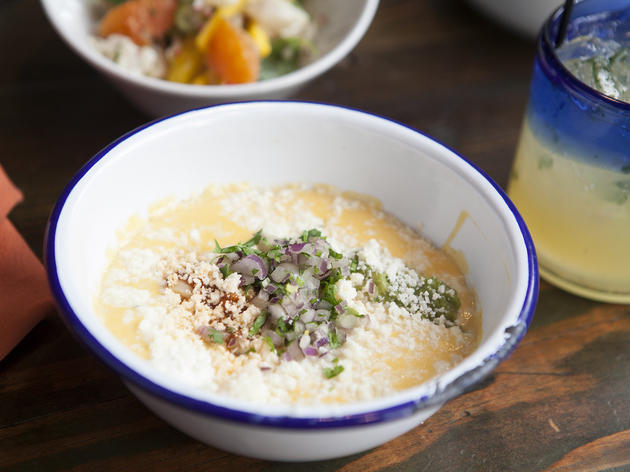 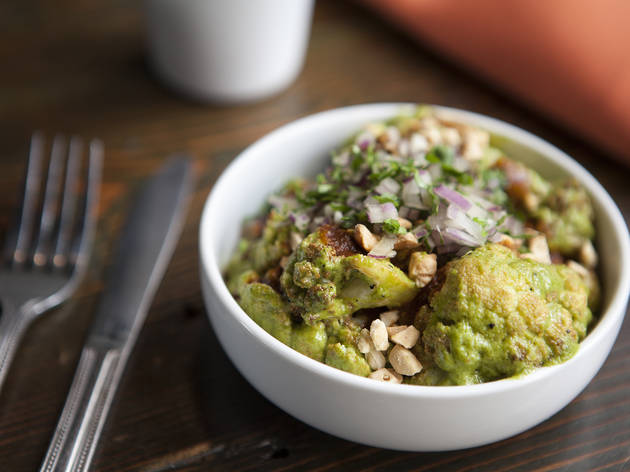 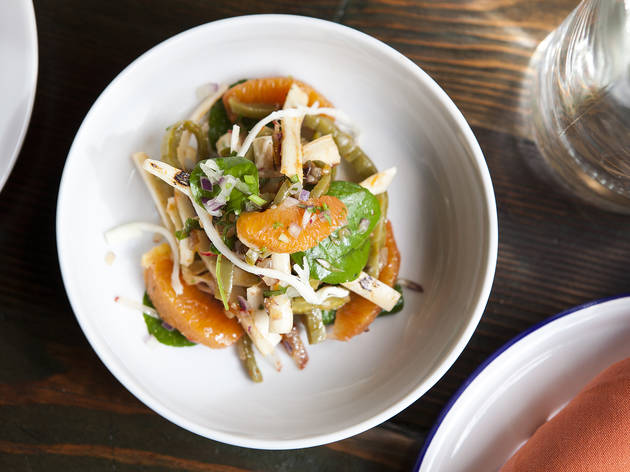 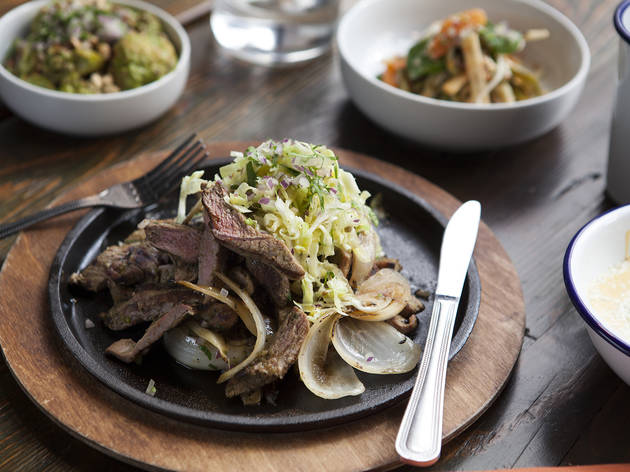 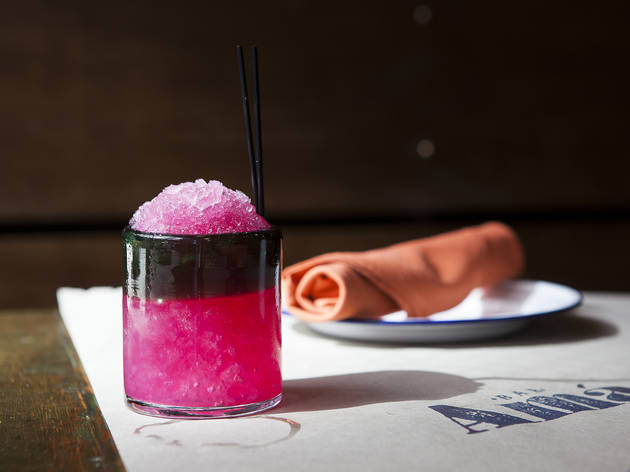 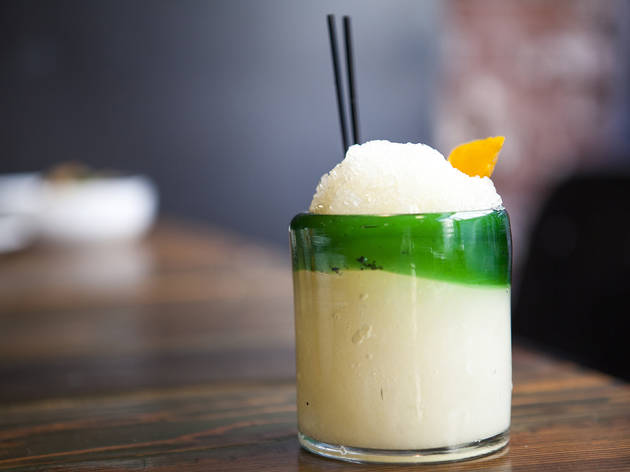 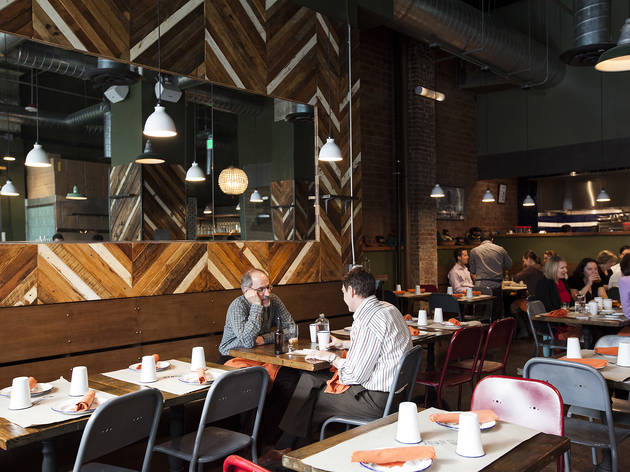 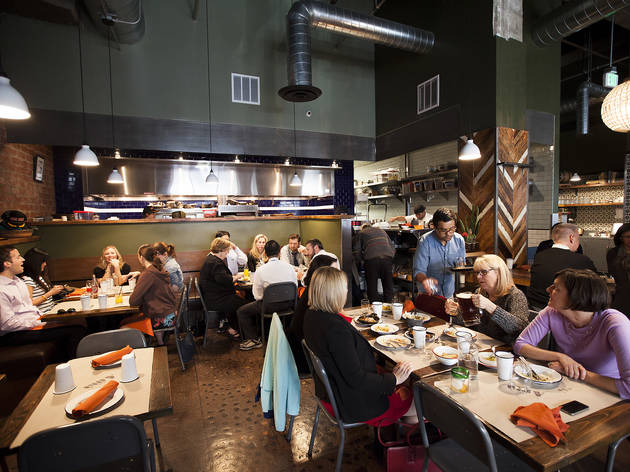 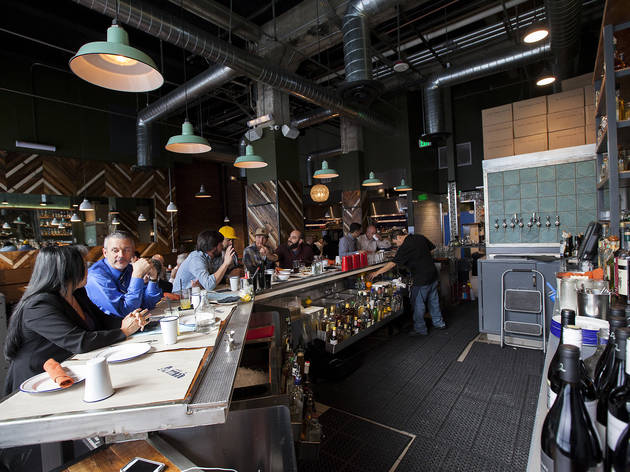 Puffy tacos, light, deep-fried versions of this town’s staple, may be the claim to fame at Bar Amá', but the essence of chef Josef Centeno’s second Downtown venture lies in its Queso ($9). The molten orange substance with both the color and viscosity of melted Velveeta cheese tastes shockingly similar to the low-brow, store-bought stuff. It may be confusing at a restaurant where $12 gets you two tacos, but we’re happy to dive right in to flavors this good.

Centeno, the top-notch toque of the popular Bäco Mercat, upgrades down-home dishes including Frito pie, taquitos, fajitas and enchiladas. That melted bowl of queso is topped with avocado, diced red onions, a dusting of cotija and served alongside a mound of piping hot, glossy tortilla chips, fresh from the fryer. Go for haute dishes such as banana leaf-wrapped rabbit ($24)—the menu proudly declares, "All meat is from Niman, Heritage, Paso Prime & Pitmas Farms"—cooked on the wood grill. Lighter items on the generally heavy menu include hearts of palm salad ($12), a stringy bed of cactus, palm hearts, citrus and quesillo cheese, and a small bowl of cauliflower florets ($9) dressed with a cilantro pesto and a heavy shower of lime. Neither would be out of place on Bäco Mercat’s pan-cuisine menu.

Much like its sister restaurant, Bar Amá is one of those new-old places, built to look like it has been around for much longer than its three-months. Planks of chevron-pattered, reclaimed wood against an unfinished ceiling and patterned tiles behind the bar define the casual, modern space. Service is generally prompt, though it’s sometimes hard to tell who is a waiter and who is not, since the uniform appears to be skinny jeans and plaid. True to its Tex-Mex roots, Bar Ama is a fun restaurant that doesn't take itself too seriously.

What to eat: The base of many dishes at Bar Amá is the tortilla. Be it flour or corn, both are standout specimens handmade daily. Try the chorizo puffy tacos ($12), a satisfying bite finished with shredded lettuce and cotija cheese, and for those unafraid of carb on carb action, go for cheesy polenta taquitos ($8), corn tortillas rolled up with cheesy grits-like filling. And, of course, there's the Queso. If you consider yourself to have an addictive personality, you might want to sit this one out.

Where to sit: Without a reservation, you'll likely be relegated to the bar. But for those who reserve in advance, ask for a seat by the window or along the back banquette.

What to drink: Bar Amá specializes in tequila and mescal-based drinks and offers a lengthy selection of those spirits at up to $35 a pour. Beers are Mexican and local brews, offered by the bottle, can or on tap and also available in pitchers. Non-boozy options include fresh fruit agua fresca ($4) and housemade sodas ($3), in flavors such as sweet and sour hibiscus and tamarind-mango.

Conversation piece: Centeno, responsible for introducing Bäco Mercat's pizza-sandwich-taco hybrid called a "bäco" into every Angeleno's vocabulary, has created another instant classic with his puffy taco.