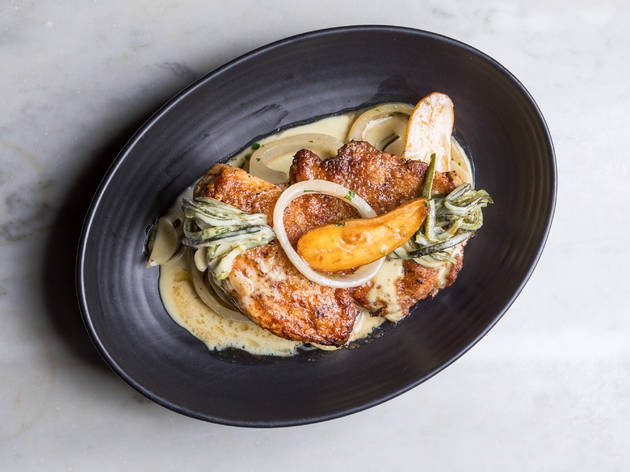 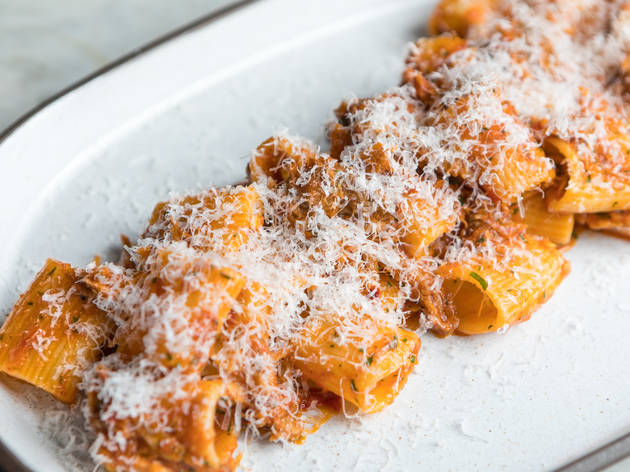 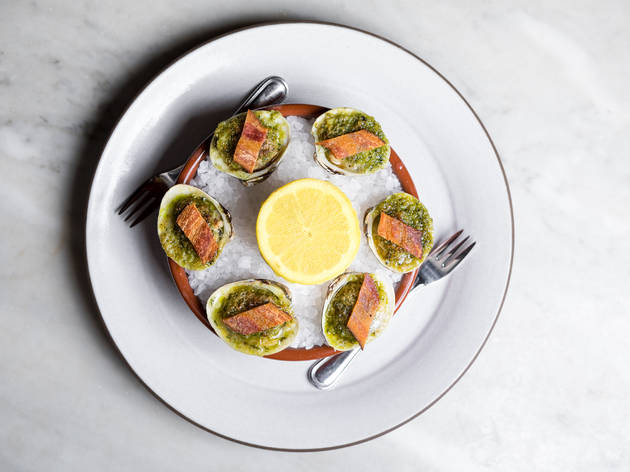 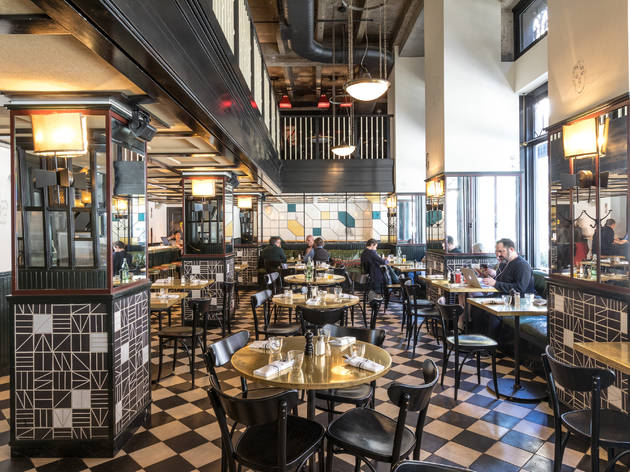 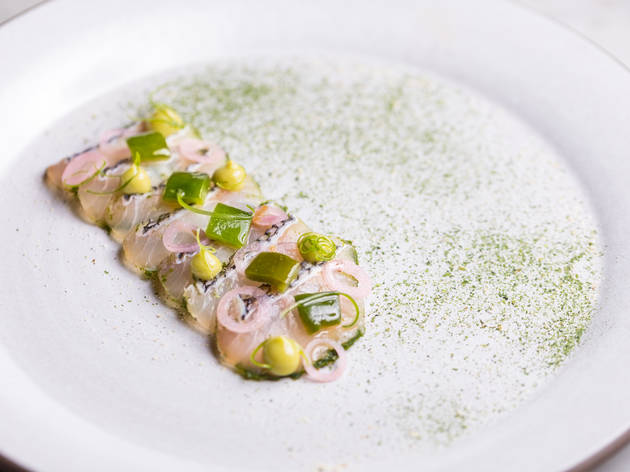 5/9
Photograph: Jakob N. LaymanCrudo of the day with tortilla salt 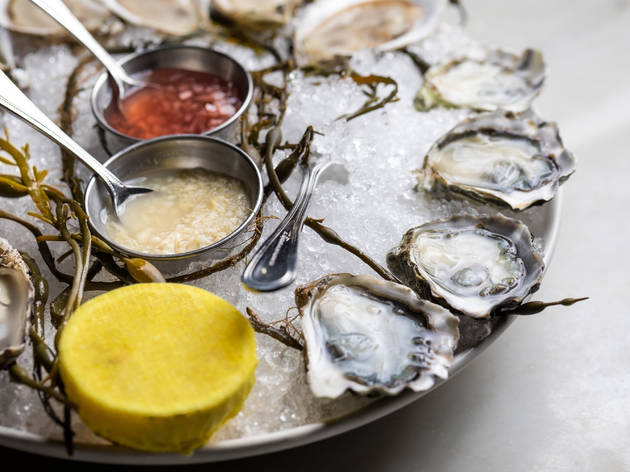 6/9
Photograph: Jakob N. LaymanOysters on the half shell with lemon, mignonette pickled horseradish 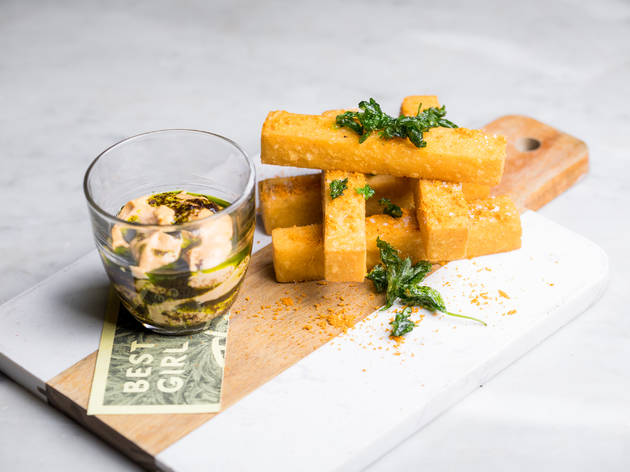 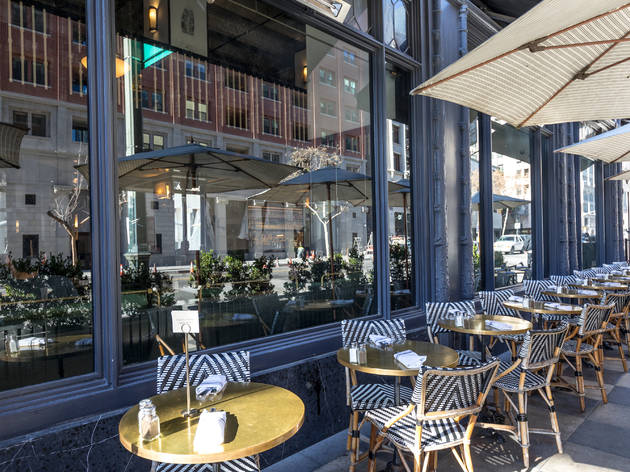 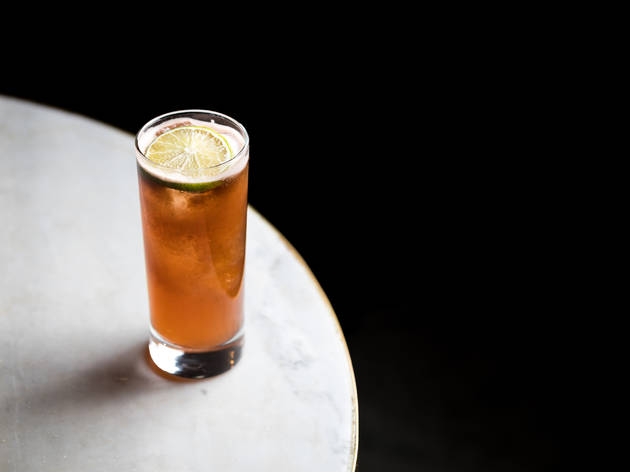 The seafood's always aces at the Ace's all-day bistro, but everything else could use some consistency.

After three visits to Best Girl—Ace Hotel’s new all-day bistro and cafe—it’s still unclear just how serious this hotel restaurant is about becoming a DTLA haunt, despite its perfect location for business lunches or evening meals, and its partnership with Providence and Connie & Ted’s chef Michael Cimarusti. The first visit was almost across-the-board terrific, the second like listening to songs by a bad cover band, and the third, while restoring some credibility, did not do enough to raise this above a two-star review.

Some dishes remained excellent throughout: Crudo and clams, served both baked and raw, were outstanding. Well, of course they were—this is a restaurant under the watchful eye of a seafood master. But that consistency seemed to be tossed out of the window and into Broadway traffic for the rest of the menu. On the first visit, tubbettoni in a spicy pork ragu emerged from the kitchen perfectly cooked and delivering just the right amount of Calabrian-chili flair. On our final visit, it arrived lukewarm and took the term “al dente” to the point where my chompers were put under unnecessary duress.

A take on Niçoise socca comes served as a Jenga tower of fat chickpea fries, rather than the crêpe-like pancake one finds in the south of France; on our second visit the mountain came under-seasoned and flaccid, yet on our final visit was delivered with a perfect crisp coating, allowing it to be dipped in a zippy anchovy aioli. Jidori brick chicken, while looking almost identical on both first and third visits—in terms of execution and seasoning balance—could have come from entirely different kitchens. The same was true for desserts: One bite of the sticky toffee pudding had me ready to declare it the best of its kind since I left the Sceptered Isle, while on another visit, it was dry enough for me to suggest that the Redcoats might need to be sent back to restore culinary honor in the colonies.

Despite all this, you could easily have a fun night at Best Girl. When the restaurant fills, it has the DTLA buzz that can make it a destination, especially before a show at the Theatre at Ace Hotel. The service is eager and friendly, and despite the scarcity on offer by the glass, the short list of wine, beer and cocktails is well considered.

It could also, over numerous visits, be possible to construct one heck of a meal at Best Girl.
However, at around $150-plus for two, unless they can become more consistent, that’s also one heck of a request to make of L.A.’s diners.

With the hit-and-miss nature of the kitchen, it’s hard to suggest guaranteed winners, but, if you concentrate on the crudo, oysters and clams, you won’t go wrong.

The floating tables in the middle of the restaurant don’t offer much, so grab a seat either at the bar or by the large windows looking out onto Broadway.

The wine list is short, but always interesting. However, if you can’t face a bottle, you’ll confront slightly uninspiring wines by the glass—though the beer list is decent.