Making your way as an artist has always been tough, especially here in New York. Despite the hundreds of art galleries dotting Chelsea, the LES, Uptown and Brooklyn, as well the opportunities afforded by major museum surveys at the Whitney Museum, MoMA PS1 and the New Museum, contemporary artists have a hard time getting their work in front of the public—let alone achieving the money and fame of a Jeff Koons level of art stardom. Your first show could mean just that, of course, depending on luck, but it’s more often the case that even artists who start out hot face, at best, a journeyman career, or at worst, art-historical oblivion. There are also artists who originally couldn’t get arrested for their work suddenly being rediscovered; for the fortunate among them, this might happen during their lifetimes. Regardless of the situation, how good your art is has very little to do with how successful you are, and given the thousands of artists vying for a shot at immortality, it’s easy to lose track of quality work. We’ve compiled this list of 10 artists at various stages of their careers whose efforts ought to be recognized by every true art aficionado.

Artists you should know 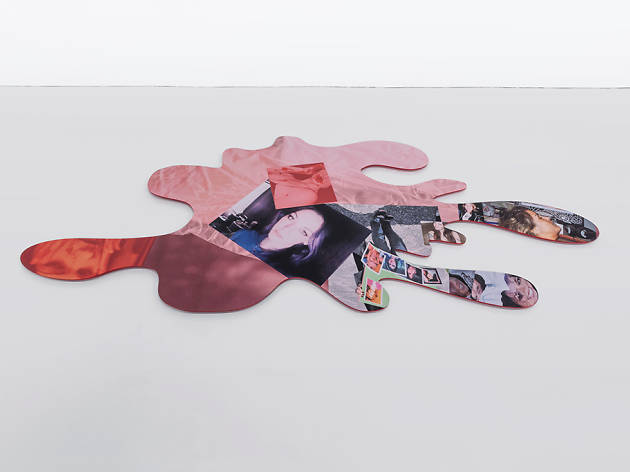 Born in the former Yugoslavian state of Montenegro, 25-year-old New York artist Darja Bajagic is a recent Yale MFA graduate, but she’s already caused controversy. Even while she was still in school, Bajagic’s work was so unnerving that the head of the department, former MoMA curator Robert Storr, questioned her sanity. But while her work may be outré, there’s nothing unhinged about it. Dwelling on the (very) dark side of human nature, Bajagic’s collages, drawings, paintings videos and photographic pieces (some of them sculptural in form) draw upon a disturbing wellspring of pornographic imagery and serial-killer narratives. She depicts the way society reduces women to sexual objects and targets of violence. That women themselves are blamed for this state of affairs represents the real horror behind Bajagic’s amalgam of Goth aesthetics and feminist critique. 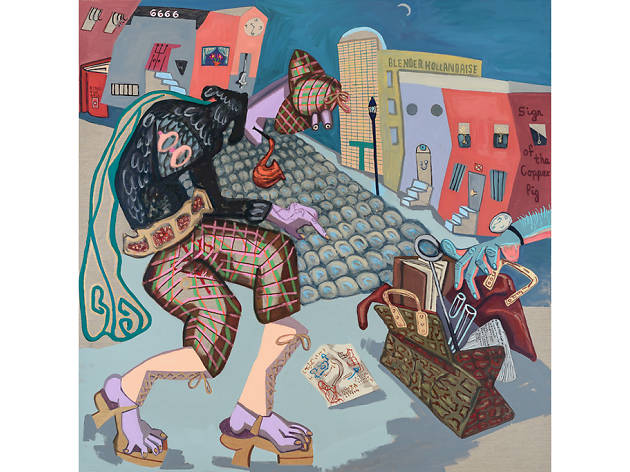 Barrett, who divides her time between Brooklyn and a home in the Hudson Vallery, calls herself “a novel reader and romantic about to turn 50, whose painting features imagery, strange color and unorthodox gender”—a description that undersells her oddly figurative style. While her compositions span such traditional categories as genre scenes, portraits and still lifes, she takes an unconventional approach to depicting androgynous, crossing-dressing subjects going about everyday settings that veer into the surreal. With a mix of styles that’s as strange as it is compelling, Barrett’s paintings reverberate with echoes of De Chirico, Ernst and Magritte, along with notes of Phillip Guston, Red Grooms and Alice Neel. 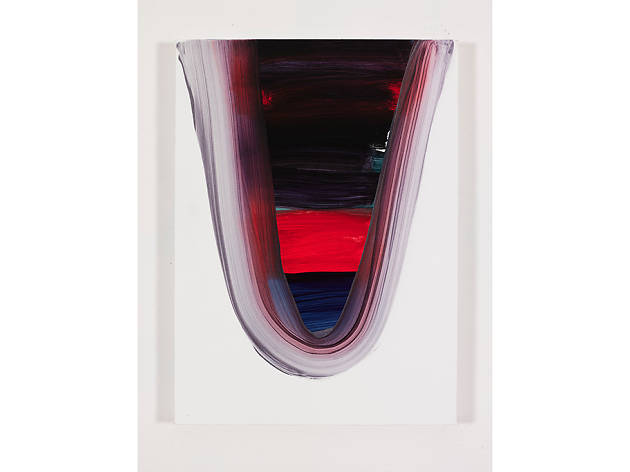 Belag is a veteran abstractionist who has been working in New York for 35 years. She’s an unabashed colorist whose paintings can be described with one word: Bold. Bold colors, bold compositions and bold gestural marks are the defining features of her approach to paint, which she applies to her canvases with rags and knives as well as brushes. She’s waging a one-artist war against a “chromo-phobic” culture, as she calls it, in which good taste masks a fear of color’s emotional impact on viewers. Judging from her work, it’s a battle she aims to win. 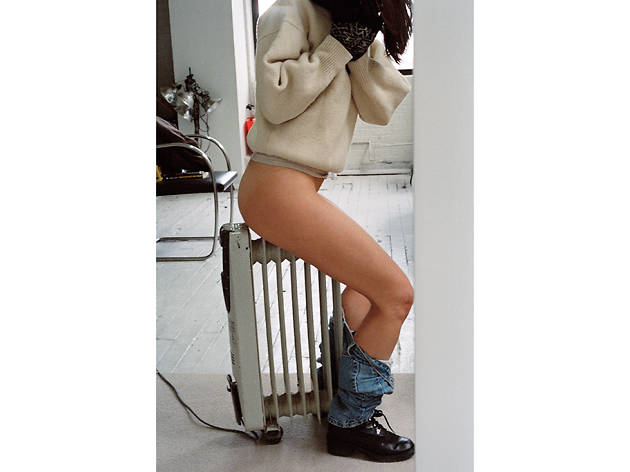 Chetrit has done well for herself since she first began to exhibit her photos in 2009. She’s appeared frequently in group and solo exhibitions in both the United States and Europe. But while she’s had plenty of exposure, her career remains somewhat under the radar: Not hidden in plain sight, exactly, but rather existing with a gap between the virtues of her work and breadth of attention it’s received. That may be because her photos seem so straightforward, though they’re actually not. Her images—still lifes, nudes and even portraits of her parents—are formal in tone, abstracting their subjects while imbuing them with hints of narrative just beneath their elegant veneers. Interrogating art-history and the role of women within it, Chetrit furthers photography’s analog tradition in a digital era. 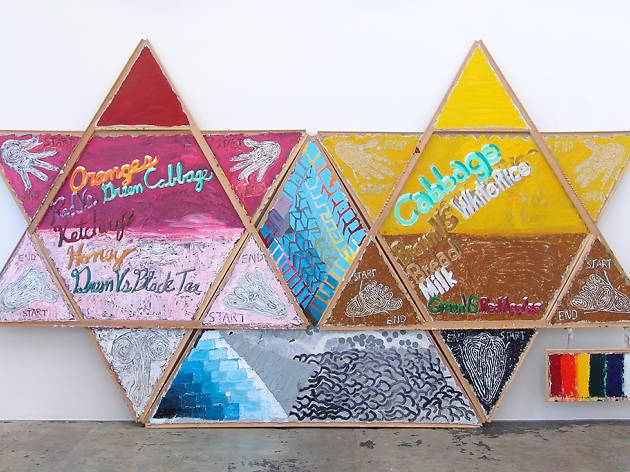 Mike Cloud was once described as an “artist of the, moment” in a New York Times in 2006, the same year his work appeared in “Frequency,” the Studio Museum in Harlem show that launched Hank Willis Thomas and Mickalene Thomas. Since then, Cloud has sustained an admirable career, though not one on the level of art stardom. No matter, since his work offers a painterly punch in the service of themes related not only to African-American experience, but to universal human truths. His style has evolved over the years from collages to abstracted grids to his current series of thickly-painted canvases, some of them shaped, that have the look and feel of self-taught art (though Cloud earned his MFA from Yale). Images of coffins, stars and the Confederate flag all conspire to create a meditation on the rocky relationships between the individual and history, life and death, equanimity and inner turmoil. 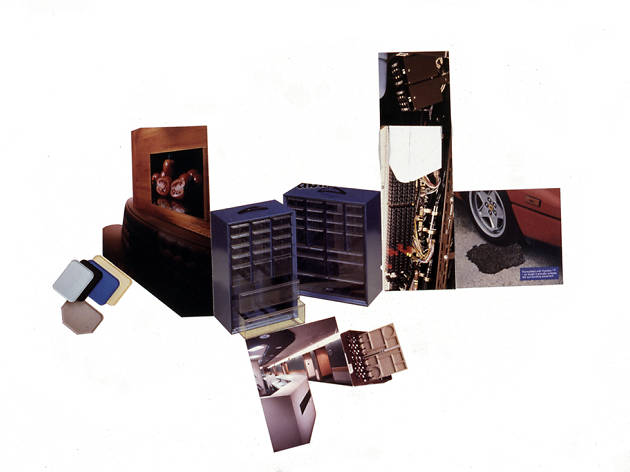 During the 1980s, artist, critic and TONY contributor Anne Doran was part of a mini-movement exploring the marriage of photography and sculpture. Largely forgotten now, this interest in the “photo-object,” as it was called, revolved mainly around a handful of female artists intent on unpacking the representation an/or objectification of women in the mass media. Doran in particular re-photographed images from ads, product catalogs and soft porn, mounting them on aluminum panels dynamically set apart by aluminum bars. Compositionally, the result suggested points in a constellation, but the three-dimensionality of the forms also served as a metaphors for the body. In many respects, Doran spatially exploded the collage technique of such Dada artists like Hannah Höch, yet at the same time, the way the photos linked together also foreshadowed the Internet’s web of connectivity. Last year, Doran’s works resurfaced in a solo show at Invisible-Exports to critical acclaim, and she is now continuing the investigation she began with them. 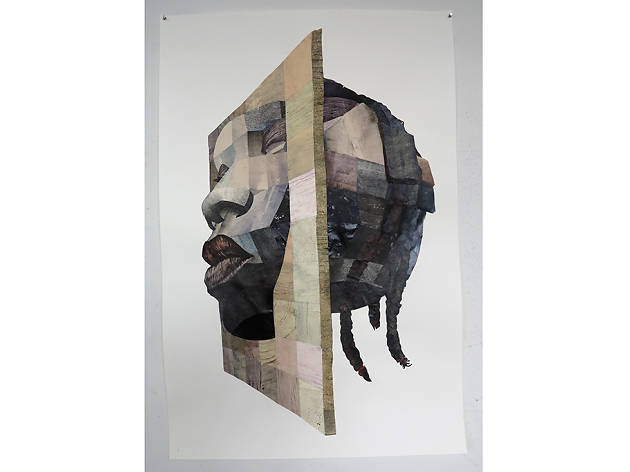 Born on the South Side of Chicago, Klos was “taught by friends how to both hide from and resist threats, and, when confronted by police or by other young black men, to shift from being invisible to being strong, and back again.” This state of affairs—“shape shifting as a survival strategy”—informs the work of this African-American artist, who creates huge collages, some measuring eight-feet in length. They often picture the hands, heads and faces of African-American males, rendered as faceted planes of faux wood-grain, as if Arcimboldo had raided Home Depot. But these literally constructed identities are a shaky lot, often falling apart like shotgun shacks in a hurricane. Klos’s collages create powerful visual metaphors for the same injustices against African-Americans that have exploded into the headlines through the Black Lives Matter movement.

Yashua Klos, Pass Through This, 2015
Photograph: courtesy the artist 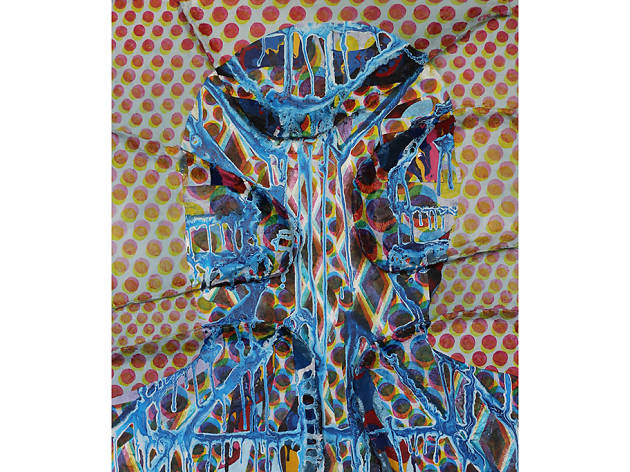 A born and bred New Yorker, Komoski has been pursuing his uniquely chaotic style of painting for 30 years. Back in the 1980s, his work eschewed fads of the period—such as appropriation art, Neo-Expressionism, Neo-Geo—finding its own rhythm in compositions that weren’t entirely abstract or figurative—or even, arguably, in between. Instead, Komoski’s paintings employ membranes of different surface effects—webs, ripples or combinations thereof—stretched tautly one on top of the other with each fissuring or tearing open to reveal layers below. Komoski uses dates for his titles, suggesting a kind of diaristic chronicling of various fluctuating states—of mind, time and space. 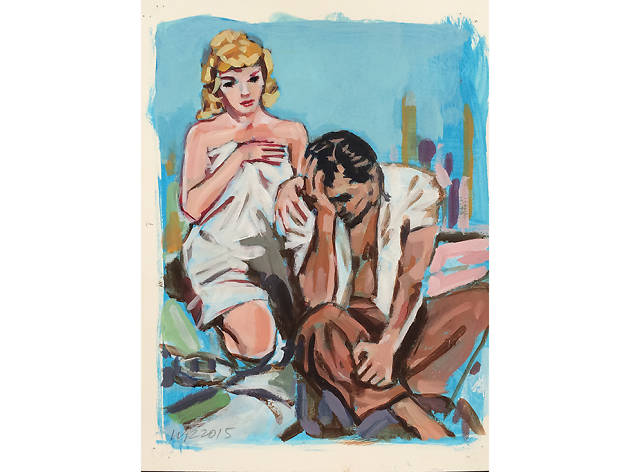 In addition to being a painter, Walter Robinson is a critic and founding Editor of the art-world news site, Artnet. He’s also been an art-world presence for almost 40 years, a wry participant and observer who knows everyone and who everyone knows. His work was included in the legendary Times Square Show of 1980, and he was also a member of the original Metro Pictures stable when the gallery first opened that same year to much hubbub. Richard Prince’s “Nurse” paintings and Damien Hirst’s “Spin” paintings? Robinson did them first, along with numerous other takes on pulp-fiction cover illustrations, Land’s End catalog models, portrait of friends and family, and oddly disquieting still lives of ordinary food items (hamburgers, french fries) and everyday products (Advil, True cigarettes). A throwback to the Parisian flâneur of the 19th-century, Robinson is a painter of modern life for postmodern times.

Walter Robinson, A Stranger to Myself, 2015
Photograph: courtesy the artist 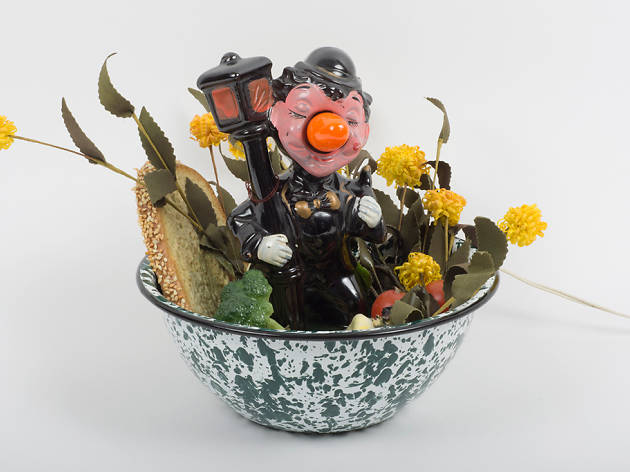 Silverman’s mixed-media works probe the evanescence of memory, experience and sensation, as well the gap between our desire to preserve the past for the present and the present for the future—and our actual ability to do so. In one recent piece, she filled a wheelbarrow with dozens of resin casts of sand dollars—those round hard remnants of sea urchin that wash up on the beach. Each was embedded with different nondescript items like nails, foreign coins and grains of rice. More recently, as part of MoMA PS 1’s “Greater New York” show, she presented a series of small bowls, each containing plastic facsimiles of comfort foods—noodles, slices of bread—and kitsch figurines. Both serve to salve souls struggling to find some measure of contentment in the moments before time sweeps us into oblivion.