With roughly 1.5 million works in its collection, the Brooklyn Museum is second only to Metropolitan Museum of Art in terms of size, outstripping the holdings of other NYC art museums such as MoMA and the Whitney. Also like the Met, the Brooklyn Museums covers some 5,000 years of art history, from Ancient Egyptian treasures to the latest cutting-edge work. But don’t take our word for it: Check out some of what's in store in our list of the best artworks in the Brooklyn Museum.

RECOMMENDED: Full guide to the Brooklyn Museum in NYC

What to see at the Brooklyn Museum 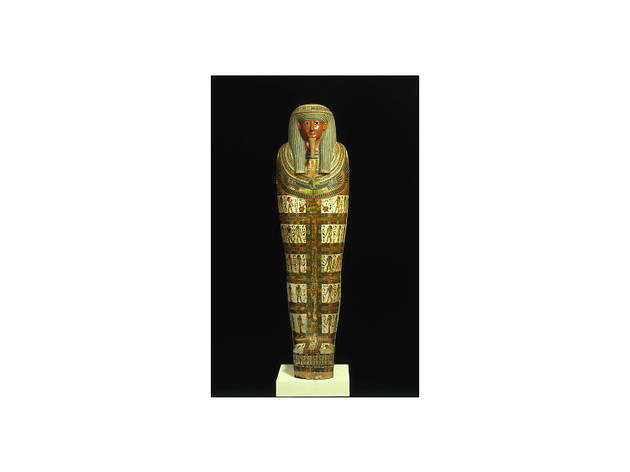 The Brooklyn Museum owns an outstanding assortment of ancient Egyptian artifacts with this object being a prime example. A mummy casing dating from Egypt’s Third Intermediate Period, it was made for a priest named Nespanetjerenpere from a material known as cartonnage, a mix of cloth or papyrus soaked in plaster and water. The scenes painted across its surface depict deities who are aligned with various parts of deceased’s body as prescribed by the Egyptian Book of the Dead. 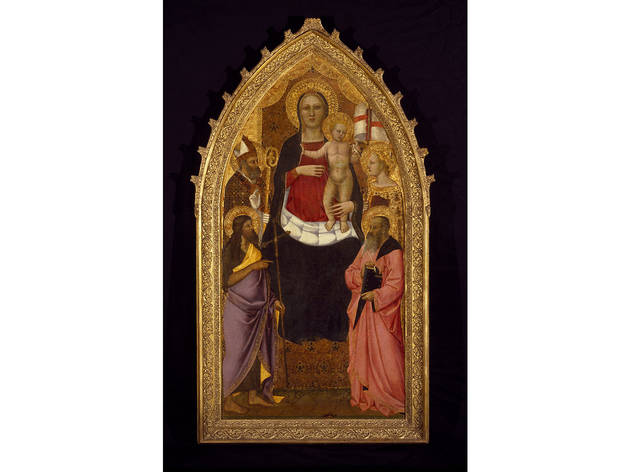 Nardo di Cione was one of three artist brothers working in Florence during the period when Medieval art was giving way to the art of the Early Renaissance. In this altarpiece created for the Duomo, Florence’s centra cathedral, that historical transition can be seen in Di Cione’s mix of stylized Byzantine motifs and naturalistically rendered facial features. 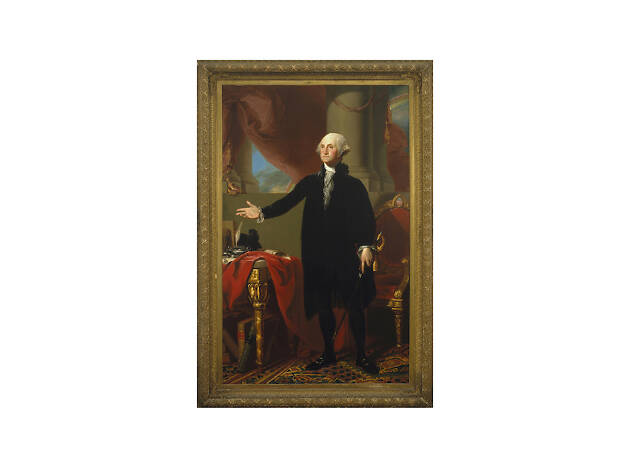 Considered the greatest portraitist of 18th-century America, Gilbert Stuart is the author of what’s arguably our second-most iconic symbol after Old Glory: The head of George Washington on the dollar bill. Stuart was commissioned to paint two likeness of the Father Of Our Country, the first a waist up version (on which greenback George is based), the second this full-length portrait in the grand manner usually reserved for monarchs and other nobility. It shows Washington during his last year in office, which, unlike most royalty, he voluntarily vacated after two terms. The painting was commissioned as a gift for the English statesman William Petty (the British Prime Minister who negotiated the end of the Revolutionary War), whose title was first Marquis of Lansdowne—the reason why canvas is also called Lansdowne portrait. The version at the Brooklyn Museum is one of three copies that Stuart made. 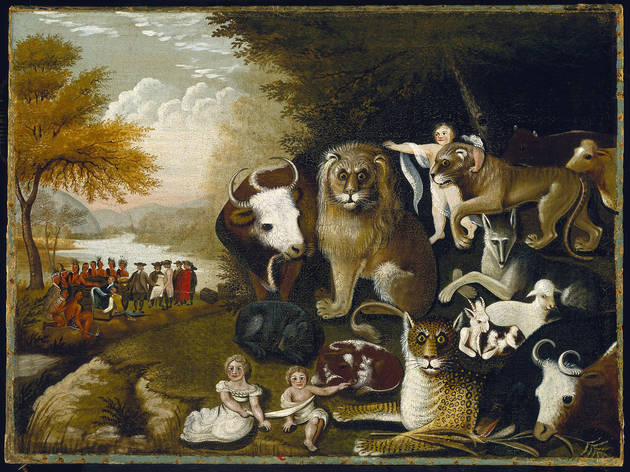 Based on a Old Testament text describing an Edenic paradise in which the “lion lays down with the lamb,” The Peaceable Kingdom is one of history’s most iconic folk-art paintings. Painted by Edward Hicks, a Quaker preacher and self-taught artist, it’s one of 60 versions made overall. The background features a scene of Pennsylvania’s founder, William Penn, forging a treaty with Native Americans, which is based in turn on a Benjamin West painting of the same subject. 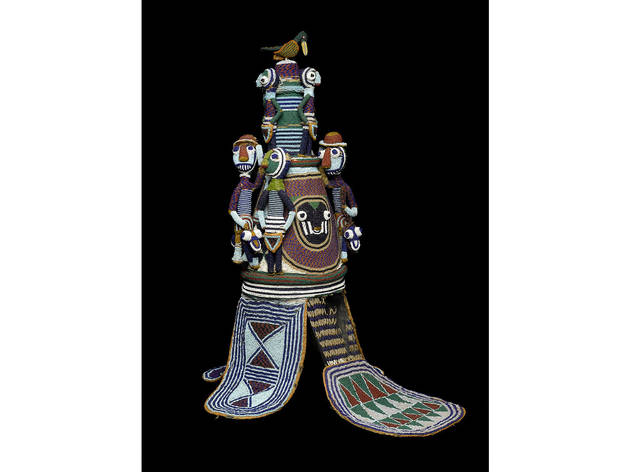 As with its holding in Egyptian art, the Brooklyn Museum’s collection of African art is one of the finest in the five boroughs. This royal crown from the Yoruba people of Nigeria was created during the period of European colonialism and reflects the web of connections that linked colony to colonizer. It’s decorated with figures of men wearing decidedly Western-style bowler hats, and it’s made with beads imported to Africa by the British. Moreover its overall form is modeled on the wig British barristers wear in court, something still being done in Britain and Nigeria today. 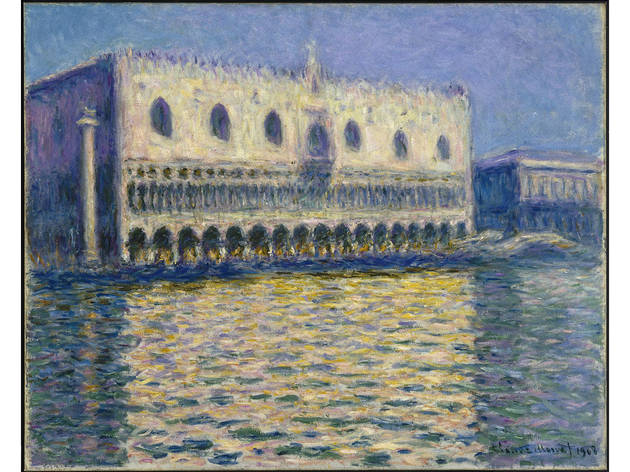 Monet painted this image of the Doge’s Palace along Venice’s Grand Canal in grand plain air fashion, by stationing himself across from his subject in a gondola. The scene captures the mirage-like quality—the shimmering interplay of light and color, water and sky—that sets off La Serenissima from every other city in the world. 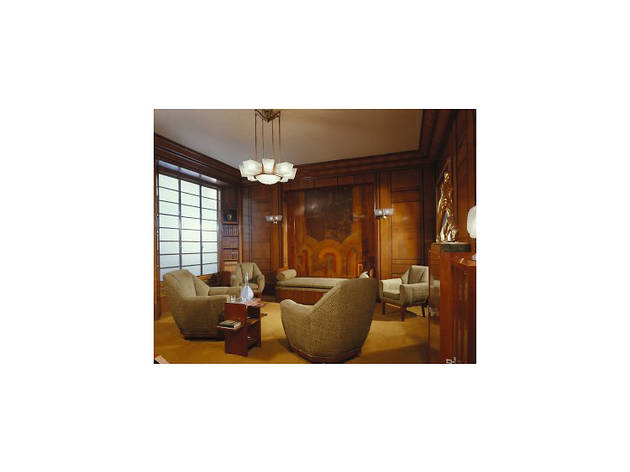 Like the Met, the Brooklyn Museum features period rooms, with this Art Moderne interior being, arguably, the most elegant. Designed by the New York office of the Parisian decorating firm Alavoine, the room is paneled with inlaid veneers of rosewood and olive wood. Richly upholstered club chairs add a suave touch. 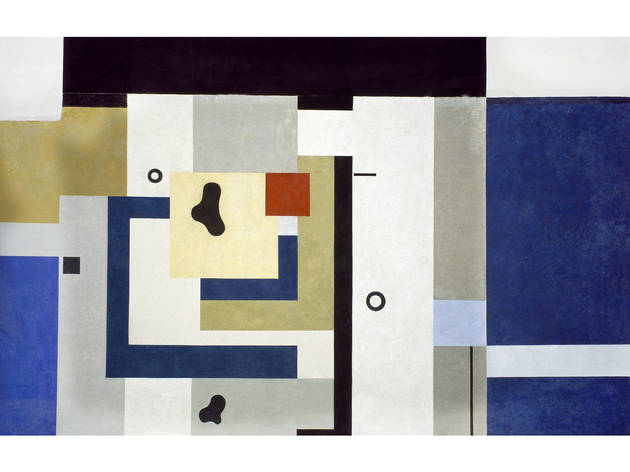 Born in Birmingham, England, Albert Swinden came to the United States in 1919, moving to New York after first studying at the Art Institute of Chicago. He was a founding member of American Abstract Artists, which began in 1936 as a way of promoting abstract art at a time when the genre was running up against stiff critical resistance. (It continues to this day.) That, however, didn’t deter the Works Progress Administration/Federal Art Project in Washington from commissioning a group of abstract painters, Swinden among them, to create murals for Brooklyn’s Williamsburg Houses, one of the earliest public housing projects in New York City. Swinden’s contribution is especially significant because it is a rare surviving example of his work. 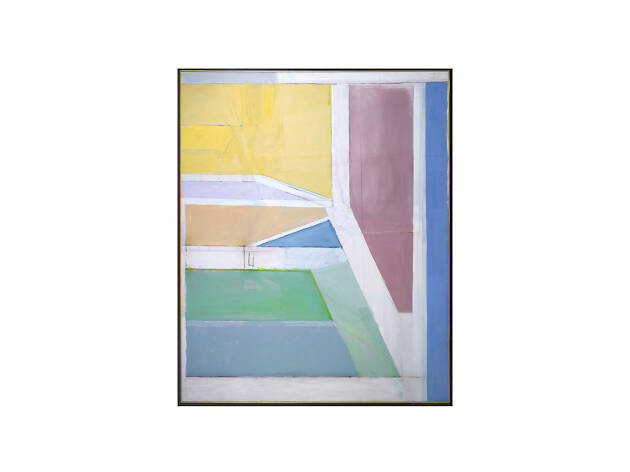 A contemporary of the Abstract Expressionists, Richard Diebenkorn was an Oregon native who spent the preponderance of his career on the West Coast—both in San Francisco, where he was associated with the Bay Area Figurative Movement, and in Los Angeles, where he helped to develop a lyrical, Golden State variant on gestural color-field abstraction. It was also in L.A., specifically in Santa Monica, where he created his signature body of work, the “Ocean Park” series, so named for the neighborhood where he kept his studio. Inspired by the area’s proximity to the ocean, and the quality of light it afforded, Diebenkorn’s paintings resembled abstracted aerial views of the landscape outside his window, in which geometric compositions were limned with deft applications of understated, almost pastel-like hues. Like his earlier figure paintings, the “Ocean Park” series owed a debt to Matisse. Diebenkorn wound up paintings 135 different variants on the theme, including this prime example. 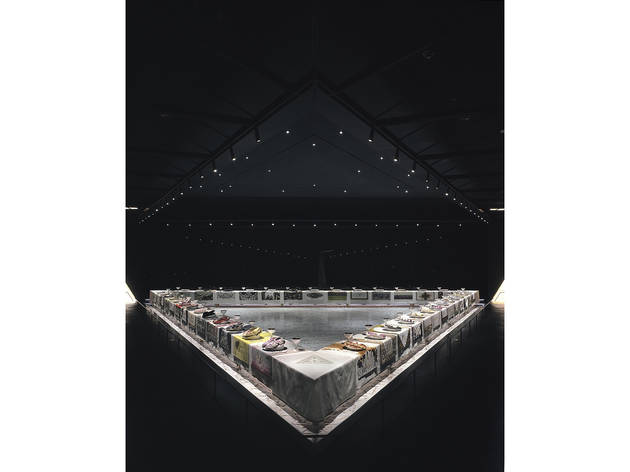 This icon of 1970s feminist art is the centerpiece of the Brooklyn Museum’s Elizabeth A. Sackler Center for Feminist Art. The triangular table features 39 place settings, each representing an historically significant woman. Sojourner Truth, Virginia Woolf and Georgia O'Keeffe are among the honored guests whose presence is marked by decorated porcelain plates and individually embroidered tablecloths. 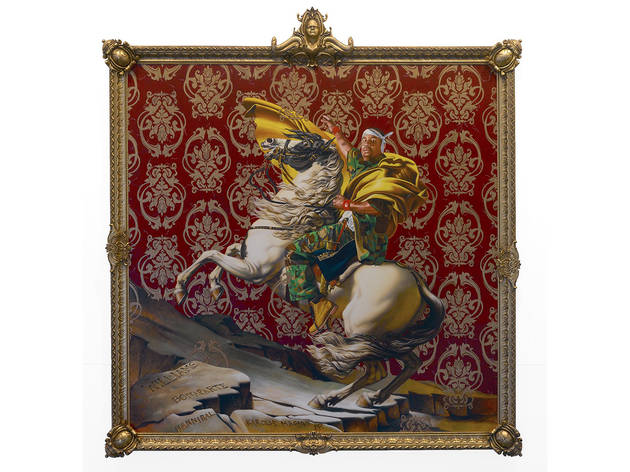 Chockablock with eye-popping colors and patterns, Wiley’s paintings marry Old Masters–ish technique with contemporary portrait subjects who are young women and men of color—and who, in the artist’s view, art just as worthy of grand-style representation as the potentates of yore. This canvas, based on Jacques-Louis David's Bonaparte Crossing the Alps at Grand-Saint-Bernard, is a case in point with its depiction of an anonymous young black man in street-smart clothes replacing the figure of Napoleon in David’s original. It’s a statement about staking a claim in art history for people traditionally left out of it. 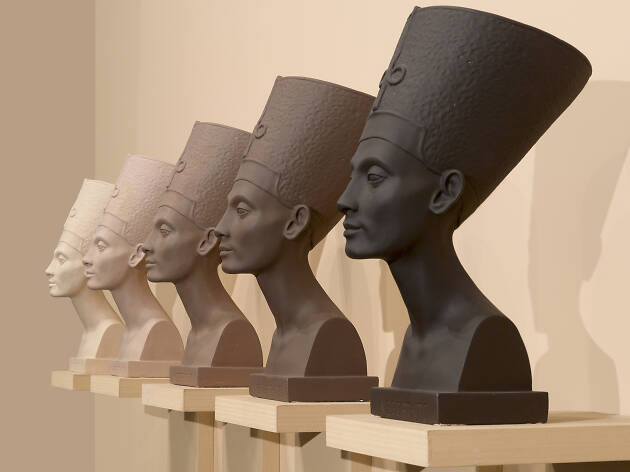 A pioneer of the Conceptual Art genre know as Institutional Critique (which explores how museums and other parts of the art-world eco-system codify art), African-American artist Fred Wilson has been keenly focused on the role race, gender, class and politics plays in the creation of culture and the writing of art history. In this piece, he comments on an ongoing debate over the racial identity of the Ancient Egyptians, who are generally depicted as white, or at least light-skinned, even though they were an African civilization. Here, Wilson has arrayed five replicas of the iconic bust of Queen Nefertiti, forming a kind of color scale shading from a pale, sandy hue to a deep, dark brown. 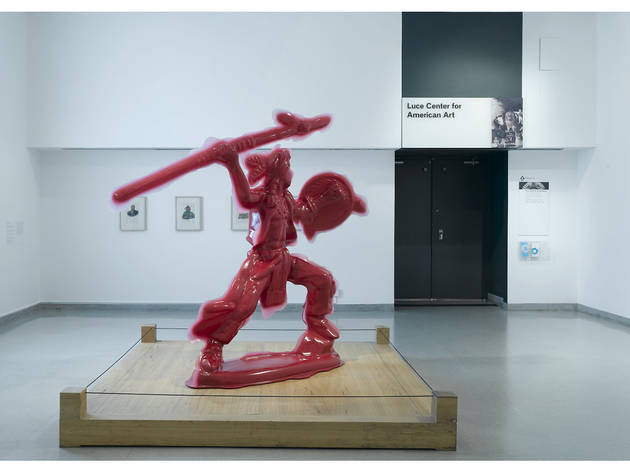 This Israeli-born artist is known for using 3-D scanning techniques to enlarge plastic toy figurines into monumental sculptures. This one of a Native American warrior measures more than six feet high, and is true to the source down to the figure’s indistinct features and contouring “fins,” which mimic the seams left by the injection-molded manufacturing process. 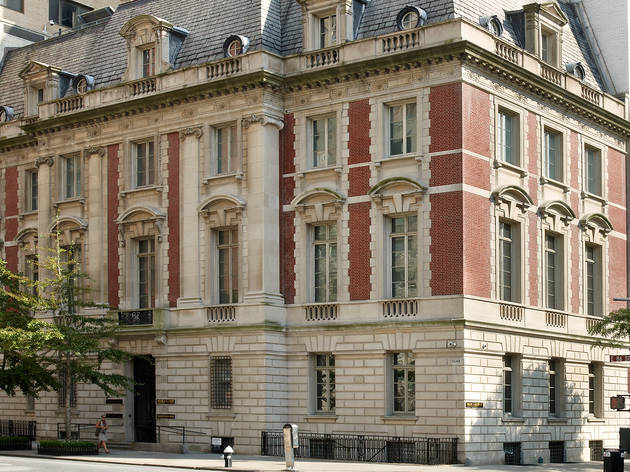 Take in art, films, talks and more without spending a dime on these First Friday and evening hours at New York's museums