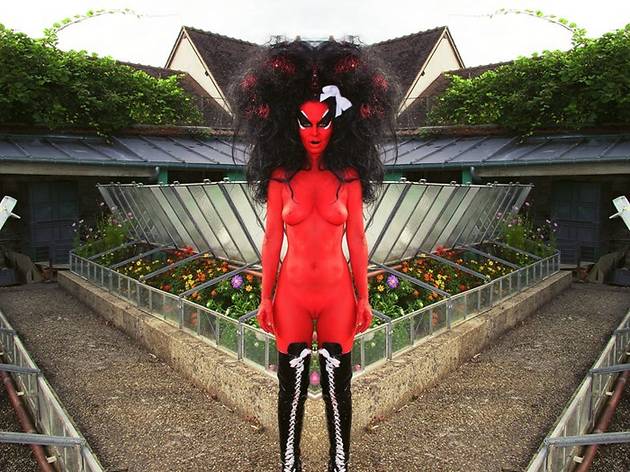 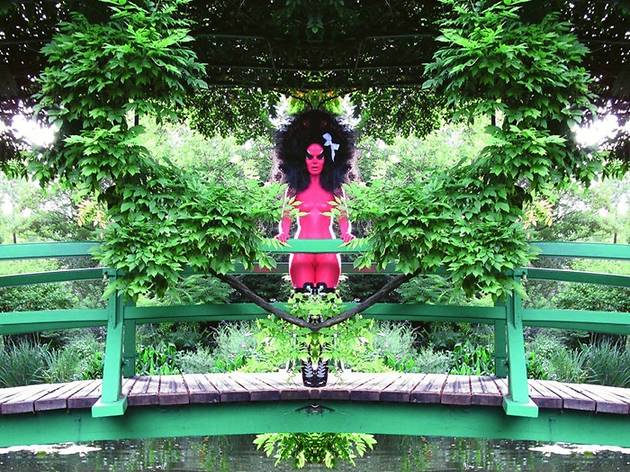 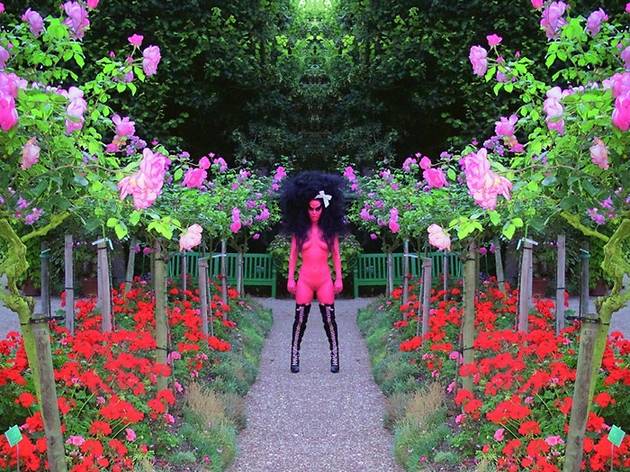 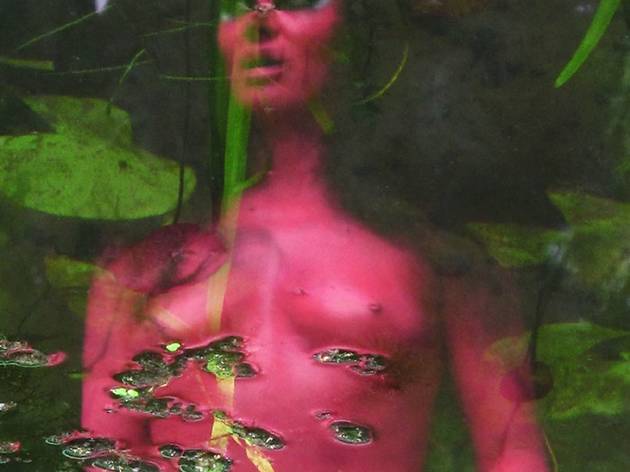 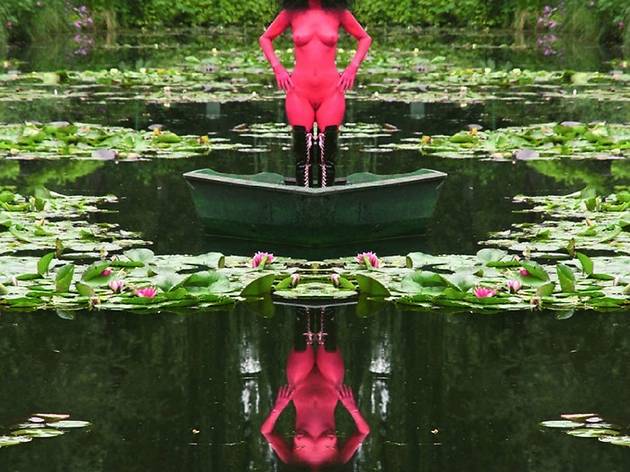 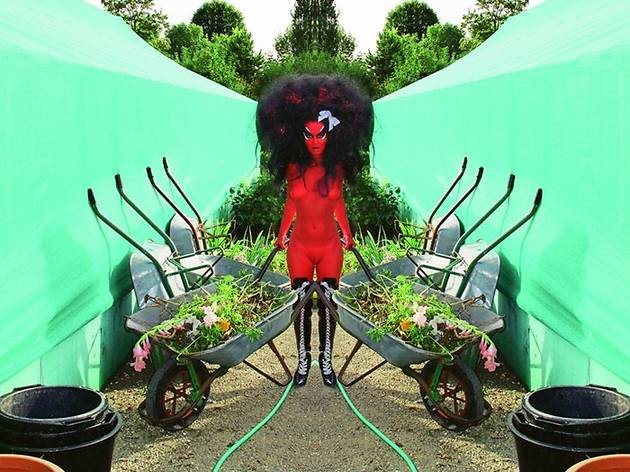 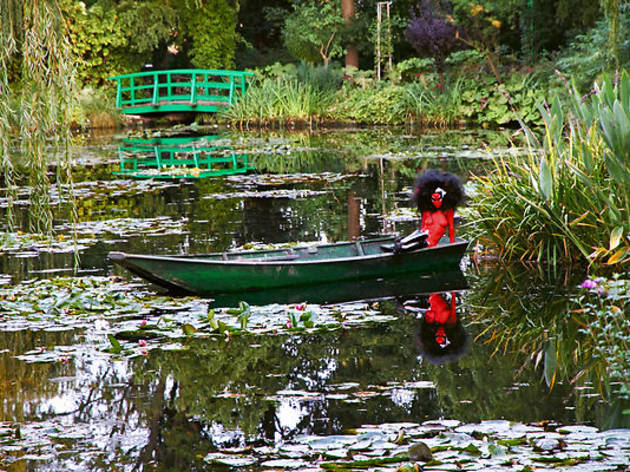 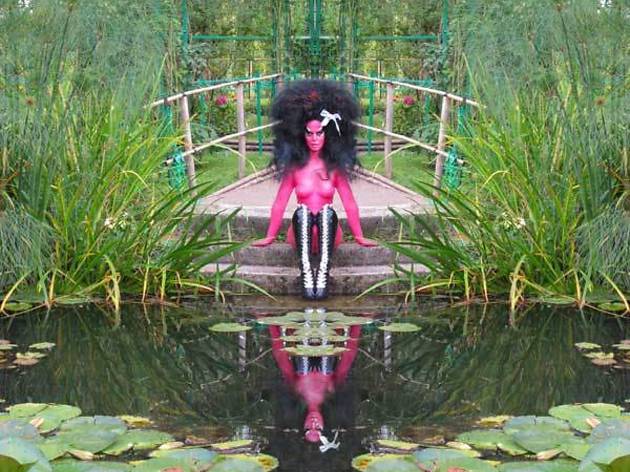 After years of neglect following World War II, Monet’s famous Giverny house and gardens were restored to their former glory in 1980 and reopened to the public. The inspiration for the artist’s most iconic paintings, this pastoral landscape along the Seine once again became the living, breathing work of art that Monet cultivated and recorded between 1883 and his death in 1926. But for all its languid, postcard-perfect beauty, its extreme artifice is perhaps its most lasting “impression,” as the artist himself suggested when he noted, “People will protest that it’s quite unreal, and that I’m out of my mind, but that’s just too bad.… Nature won’t be summoned to order and won’t be kept waiting. It must be caught, well caught.” Taking Monet’s observation as a call to action, artist E.V. Day, who was awarded the Munn Artists Residency at Giverny by the Versailles Foundation in 2010, invited fellow artist Kembra Pfahler to join her. They collaborated on an arresting series of photographic mise-en-scènes featuring Pfahler as her infamous Karen Black persona posing amid the riotous wisteria, roses and hollyhocks of the Clos Normand flower garden, as well as the weeping willows and quaint bridges of the Japanese water garden. The result, “Giverny,” is a stunning installation that brilliantly positions these compelling images within a miniversion of Monet’s verdant oasis, replete with stone path, grass, flowers, lily pond and bridge.

What was the weirdest part of working on the project for each of you?
E.V. Day: Being at one of the most popular tourist destinations in France when no one else was there. It was so silent and surreal, and sometimes I wondered if the ghost of Claude Monet was hovering over us. The garden is so culturally familiar—from paintings and photographs—you get a mysterious feeling of déjà vu.
Kembra Pfahler: The weirdest part of the experience for me was shooting where no one had been photographed alone since someone did a geisha for a flatscreen-TV commercial several years back. Another weird thing was how the trees made phantom sounds in the wind, like the Matterhorn ride at Disneyland. Weirder still was how a brilliant artist like E.V. could so generously share such a prestigious residency in a world that typically sets women against each other.

That’s so true. E.V.’s decision was so powerful because it subverts a value system that emphasizes competition, ego, etc., offering up a model of cooperation instead.
Pfahler: It should be a priority to look after one another and perpetuate good ideas, rather than compete for cash prizes. We can’t survive on romantic ideals of the artist-as-genius anymore. We need to embrace community and optimism instead, and be more inventive about production financing. Its very Malcolm X—by any means necessary. But with a feminine touch, naturally.

E.V., what were your intentions in inviting Kembra to collaborate?
Day: The day I arrived in Giverny, I visited the water-lily pond and had a vision of Kembra in her pink body paint, black patent-leather boots and black wig, walking on the water. She and I had collaborated before on a photo series called “Chanel/Shazam” that involved my sculptures, so it was natural for me to think of her. But the vision of Kembra was also subconscious. Something about the bright colors of the flowers and the foliage contrasting with the dark water brought to mind the graphic quality of Kembra as her Karen Black persona, which as a kind of archetype fulfills some part of me, addressing the darkness that comes with extreme beauty, like Japanese Kabuki.

Speaking of which, Kembra, I love your description of the trees making phantom sounds like the Matterhorn ride at Disneyland. It conjures the same fantastical mix of artifice and mysticism that both the garden and your Karen Black persona do. There’s an almost creepy synergy in the way the latter’s presence activates the landscape in the photos. How much were you directed by E.V. and how much came from you?
Pfahler: I felt like I made an indentation in the garden, like a ding [in a surfboard]. I don’t know if I charged anything up, but it certainly charged me up. We had to shoot when the garden was closed to the public, either starting at 5am or at night after the visitors had left, so the schedule was Olympic. I get into a sort of tireless blackout, wearing my costume, and it was easy to do by the reflecting ponds because they are very black—you never think of them as being so black, so hypnotizing. E.V. did have a specific vision about placement because she knew about the history of the reflections in the pools, and how Monet painted the changing light so meticulously. She’s not usually a photographer with models per say, and she had a very quiet way about suggesting my movement. I tend to freestyle a lot, striking poses as fast as blinking, so it’s a challenge to slow down and let the costume do all of the work. I felt like being angular somehow, arms taught and militaristic, very serious. I like the way that looks when I am in full drag. Its an anticamp stance: So serious it’s funny.

“Giverny” is on view at The Hole through Apr 24.