We talk with the talented husband-and-wife photographer duo about some of their favorite pics they've taken of classic store fronts around the city.

Captivated by the classic New York storefront featured on this issue’s cover of Time Out New York?

The photo captures Albanese Meats & Poultry and was snapped by husband-and-wife shutterbug team James and Karla Murray, the duo behind the 2011 book Store Front: The Disappearing Face of New York (and its two follow ups).

"Although we originally photographed Albanese Meats & Poultry in 2003 (and interviewed Moe, [the butcher who appears in the photo]) and that 35mm photo appears in our book, the version we gave [Time Out for this week's cover] was taken in 2017," says James.
"We were really inspired by New York store signs and big neon signs [for the series],” explains Karla. “As some of these small stores disappeared, the neighborhoods really began to lose their character. We decided to start documenting them; it was about bringing awareness to these lovely mom-and-pop businesses, which are really works of art in their own right. We wanted to tell people: Go and shop, get offline! You can do things in person, and you might make a friend.”
Read on to hear the fascinating stories behind four more of their favorite photographs in the series.

"In particular, there are a couple stores that really stand out in our minds that we know we’ll always remember. One of those is Katy’s Candy Store in Bed-Stuy. We went there in 2004 because we were really attracted to the store front. It had this broken-down, hand-painted sign and a telephone booth. We went in and spoke to the owner, who was this old woman with a ten-pack-a-day, very gravelly voice, and she told us that the store was everything to her. She tried her best to keep prices low and was still selling penny candy in 2004. She was like, 'In order for me to survive in this neighborhood, I speak three languages: English, Spanish, and Mother Fucker.' She told us how this older teenager once tried to rob her and tie her up, and she was like, 'I’m not gonna call the police, but I’m gonna call your mother!' And he he let her go! The store was really everything to her but, sadly, the landlord forced her out and it closed in 2007. She got pneumonia and died. She used to be like the mayor of Tompkins, it was on Tompkins right off of Myrtle. The storefront is still empty today. Maybe if they didn’t do that, she’d still be alive. It’s sad seeing that corner now, it's so quiet and dreary."

"When we first found this storefront in Midwood, we loved the signage and thought we’d go in and buy a cake or something that we might find in Chinatown. Then we went inside and looked around and there was none of might be people might think of as oriental pastries. There were things made of Phyllo dough, and it was more Syrian. She was like, 'Where we come from, oriental means Syrian Jew, it’s actual Kosher.' To them, the term referred to the Middle East more than the Far East. It’s still in business and still vibrant. They own the building they’re in and that was the key for practically every business we've shot that’s still in business today, having the security of owning the building. We weren’t the only ones who made that mistake either. The yellowpages kept putting them under chinese restaurants, and they'd keep having to call and get it fixed. The sell some very unique and specific types of pastries. A lot of places like this are important and make each community in New York City unique."

"This was an old dive bar in the East Village. The guy sitting outside wasn’t the owner of the bar, but he was a fixture that was always there. It’s a TD Bank now. They tore the building down and built a luxury rental building. So that kind of shows you the gentrification that's going on there. That one really shook us, loosing this bar. We live in the East Village, and we've lost a lot in this neighborhood, but that one really stands out, like geez."

"This is up in the Belmont area of the Bronx. [Mike's] father started the business. He was an Italian immigrant who came over from Italy. One reason there was a big Italian population in Belmont was that they were put there by real estate developers who were using a lot of Italians to build the nearby Bronx Zoo and Botanical Garden. They needed skilled craftsman and said they could live nearby. His father started the store, and then, when he past, it was Mike and his brother, but the brother had no interest. [Mike] said he wasn't the marrying type and that when he passed, that was it for the business. We knew nothing about pork sausage, but on the way home that day we generally felt awful and were like, 'Could we take over this store? Can we learn how to make pork sausage? Could that be us?' We decided it wasn't, but pork sausage was this guy’s life. The business did close, and it became a cell phone store. Now, it’s like a 99-cent store. So it’s not really bringing anything special to the neighborhood now." 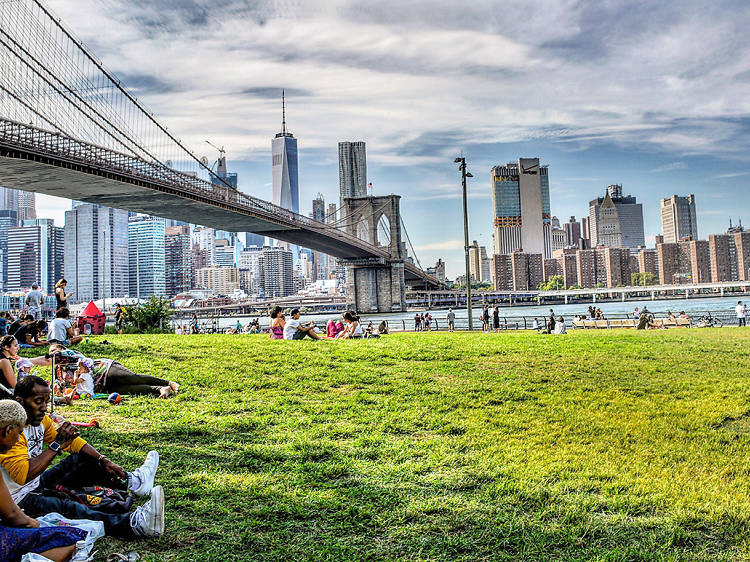 Check out hidden gems in New York City, according to Time Out Tastemakers