Jenny Holzer interview: ‘Lack of content is the message’

The artist reveals America’s dark secrets in her new paintings

Monday September 8 2014
FacebookTwitterPinterestEmailWhatsApp
Advertising
Jenny Holzer is widely known for her provocative use of language. Trained as a painter, she built her international reputation as a conceptual artist but has since returned to her original medium in response to America’s War on Terror. With her latest show at Cheim & Read about to open, Holzer spoke with Time Out New York about her new canvases. Resembling modernist classics by such artists Mark Rothko and Kazimir Malevich, they are based on declassified documents that reveal the U.S. government’s involvement in torture following 9/11. Holzer discussed her motivations and whether or not America is just as bad as its enemies.

What led you to start using language in your work?
I started off as an abstract painter. Subsequently, I wanted content in the work, so I began writing on my paintings. Mildly put, the first few attempts were not very successful.

What attracts you to the written word?
Writing conveys meaning, when you’re lucky and adept.

After all these years of being known for your LED installations, why have you returned to painting?
I began college as a confused liberal-arts student, who maybe wanted to be an attorney, and then left that in a hurry to go into painting. I came back to it, because I failed so miserably on the first tries. I wanted to have another go at it before it was too late.

Now that you are taking another stab at painting, are there particular artists who’ve inspired you?
I grew up loving Ad Reinhardt, Barnet Newman and Mark Rothko. I don’t know whether they are in the paintings, but they are always in the back of my mind. I look at Agnes Martin, Joan Mitchell, Gerhard Richter… I’m a painting groupie!

Why did you begin using government documents as source material for your compositions?
After 9/11 and after the invasion of Iraq, I wanted to understand more about what was happening. The press coverage then was very cautious, so I began looking at primary sources obtained from the National Security Archive, the ACLU and websites like DocumentCloud.

Where have you focused your research?
I’ve looked mostly at the conflict in the Middle East and what has come from it—events in Guantánamo, for example. Now I’m looking at Snowden and ISIS documents. There’s no shortage of formerly secret documents that pertain to what’s happening.

You first started off using this material in a series of silkscreens done between 2005 and 2006. How has your work evolved since then?
Initially, the silkscreens looked rather like Warhol’s Disaster paintings. They were pretty straightforward, with painted backgrounds and the text screened on top. Recently, I’ve been more interested in what’s not there, so I’ve chosen almost fully redacted documents. Lack of content is the message.

Right, you’ve used almost completely redacted documents, like a CIA report on Bin Laden, which has resulted in these geometric abstractions, some with gradated color bands. They’re sort of look like paintings by Kasimir Malevich. Was that intentional?
Yes. I’ve always been astonished by the Suprematists and at what happened in early-20th-century Russian poetry, politics and art. It was a very optimistic period that crashed. As for Malevich, I do refer to his color bands, because they seem sad to me. He tried to make an entirely new order, but when Stalin came to power, he was obliged to paint the official program, which is when those bands appeared. I thought this is kind of an awful period, too, so maybe the bands can convey it.

You have one painting based on an NSA diagram spelling out how it broke Google’s encryption code. You’ve titled it Doodle, because that what it looks like, but it has more to do with Snowden than the war on terrorism. Why did you include it?
I found it irresistible. Plus, I have looked at a lot of documents dealing with Snowden. I think he’s rocked a lot of boats.

Some of the facts coming out of those files are shocking, like one report about the death of an Afghan soldier in American custody. What do you hope to achieve by exposing these incidents?
I wanted to paint a memorial to the man and to the men arrested with him and to create a memorial to our sometimes earnest, sometimes wrongheaded foreign policy. I thought that particular file was revealing in a tragic way for both us and them.

George W. Bush labeled the terrorists as evildoers, but after dealing with this material, do you think we’re any different?
I hope and trust that we are. That’s part of the making of these works. But a policy of torture should not be tolerated. 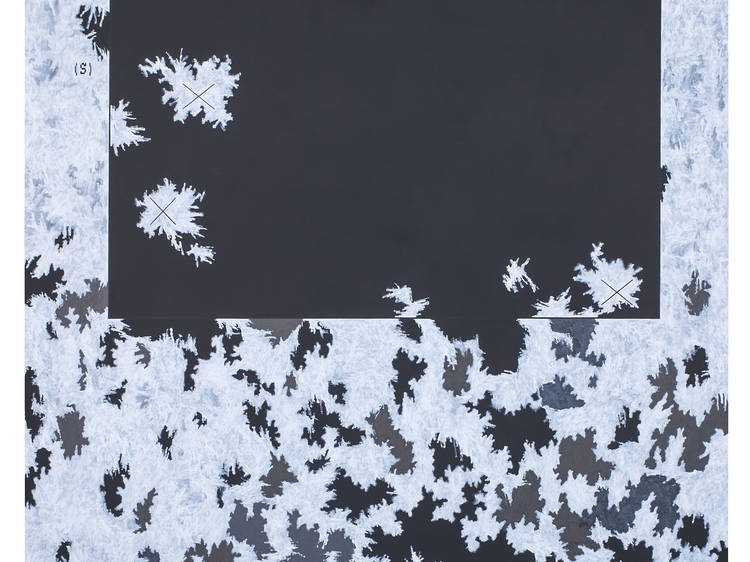 For the past several years, Holzer has been creating a series of paintings sourced from redacted government documents obtained through the Freedom of Information Act. She bases her latest show on accounts related to the use of "enhanced interrogation" (i.e., torture) by the U.S. military and the CIA on detainees captured during the War on Terror. Heavily censored, the files feature large areas of blacked-out texts and by playing upon their abstract shapes, Holzer draws a line connecting art history to the deep state.