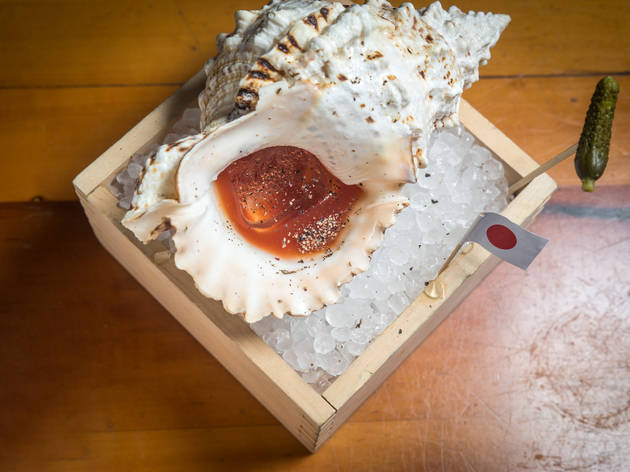 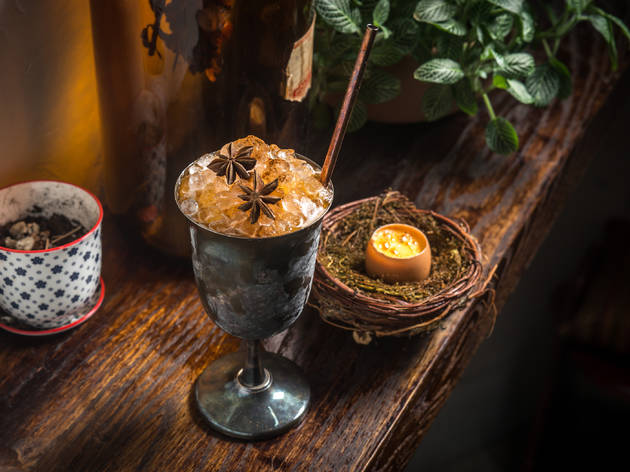 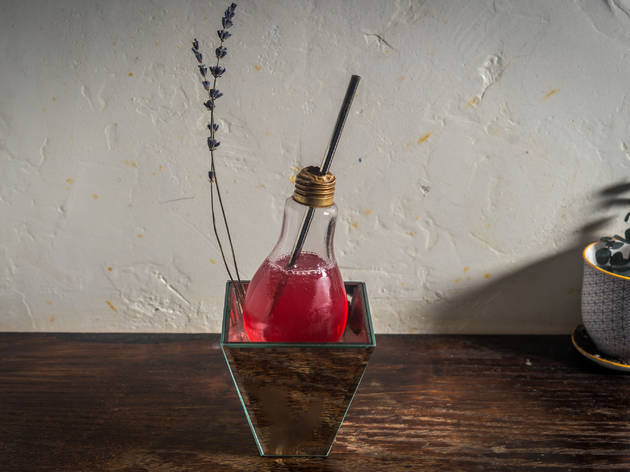 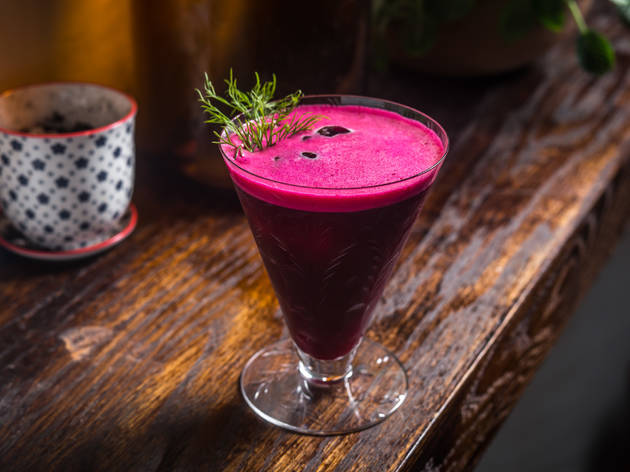 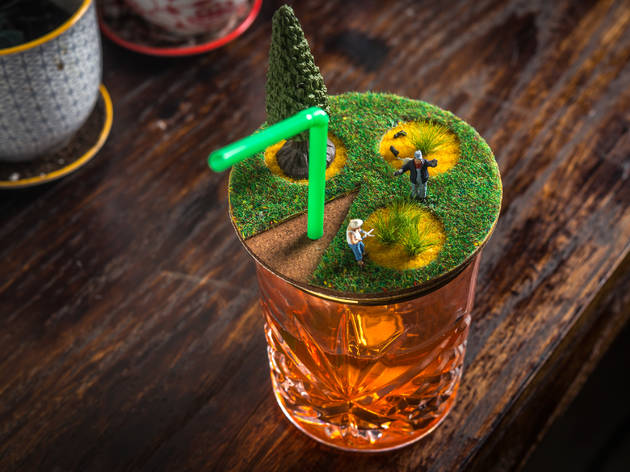 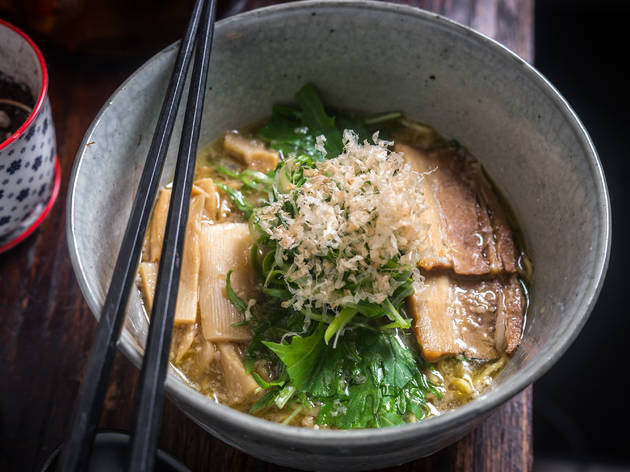 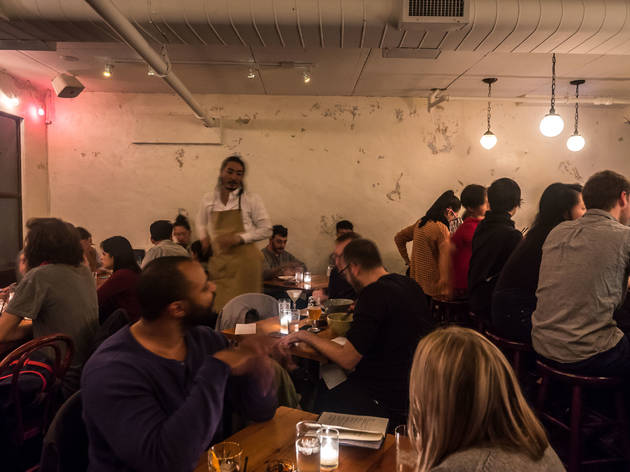 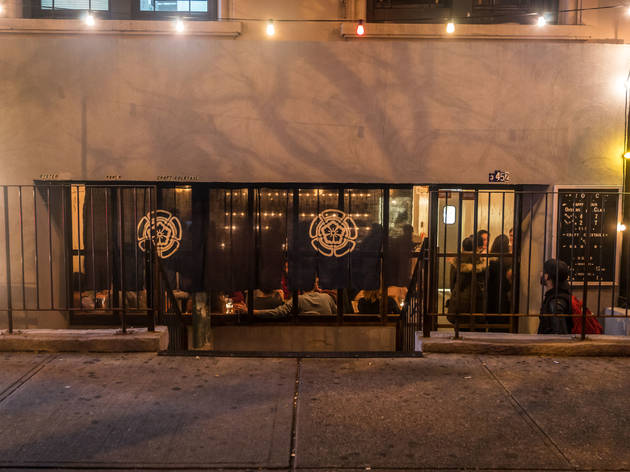 At first glance, it doesn’t look like much: Tucked between a neighborhood bodega and a Latin religious-articles shop on Broadway in Hamilton Heights, ROKC (“ramen, oysters, kitchen and cocktails,” FYI) is an unadorned semi-subterranean room, paint cracking on its white walls and a handful of two-tops crammed in front of a long wooden bar. But it is what’s behind that utilitarian bar that warrants the trek—it’s not the curious upturned lightbulbs or conch shells neatly set on shelves amid copper Mule mugs, golden pineapple goblets and mini barrels aging cocktails. No, it’s Shigefumi Kabashima and Tetsuo Hasegawa, the former Angel’s Share cohorts who, along with Joji Watanabe (Experimental Cocktail Club), serve some of New York’s most stunning drinks in one of its sparsest barrooms.

ORDER THIS: Kabashima & Co. turn out showpiece cocktails that are more than just Insta bait. Subbing out a traditional cocktail glass for a lightbulb (yes, a lightbulb) set in a small pot of pebbled ice, the lavender-flecked Flower ($12) is floral without tasting like liquid potpourri, thanks to an elegant balance of Japanese barley vodka, elderflower and tart cranberry. The Thai Tea ($12) arrives as a two-part cocktail: An ice-crammed chalice of earthy tea is spiked with cachaça and absinthe, rendered creamy and sweet with condensed milk; on the side, that same concoction is served in an eggshell perched in a bird’s nest, the shell’s top curve pristinely sliced off. For something more savory, the Tomato/Clam ($12) registers like a smoky Bloody Mary, with mescal, a hit of wasabi and copious cracks of black pepper inside a big, beautiful seashell.

GOOD FOR: A weeknight date that wows without trying too hard. ROKC doesn’t take reservations, so weekend nights might be too jammed to get a table in the small space. But during the week you can easily sidle up to the bar with your S.O. to watch Kabashima set cocktails aflame while you slurp down mood-boosting East Coast oysters, chosen by former Maison Premiere sous chef Jeff Srole.

THE CLINCHER: Cocktails aren’t the only focus at the uptown spot. From the kitchen, a spicy shrimp bun was marred by rubbery shellfish ($4.50), but a pork belly version was better, with the juices of the fatty meat melding with house teriyaki sauce and Japanese mayo ($4). Chef Isao Yoneda (Totto, Hide-Chan) also doles out three varieties of ramen ($13): a soy-and-fish-based Tokyo, a chicken-and-fish-based Kyoto, and best, a bowl of creamy Sapporo ramen ($13) featuring broth imbued with house miso and bobbing with chicken chashu, fresh corn and baby bok choy. It’s an unexpected combination—whimsical cocktails and warming ramen all the way up in Harlem—but ROKC makes  it work.