The 9 best things we saw at Governors Ball 2017

A TV star singing spectacular soul music, the return of a moody pop-music mastermind and some great summer weather (despite the shaky forecast) were just some highlights of the seventh annual Governors Ball music festival. Taking over Randalls Island for three days, the fest delivered on its promise of showcasing big acts like Childish Gambino and Lorde with top of the line visual and audio support—and all the other things we've come to expect from a big-tent music festival, from corn dogs and sushirittos to fireworks, corporate activations and street art. Here are the best things we caught at the fest. 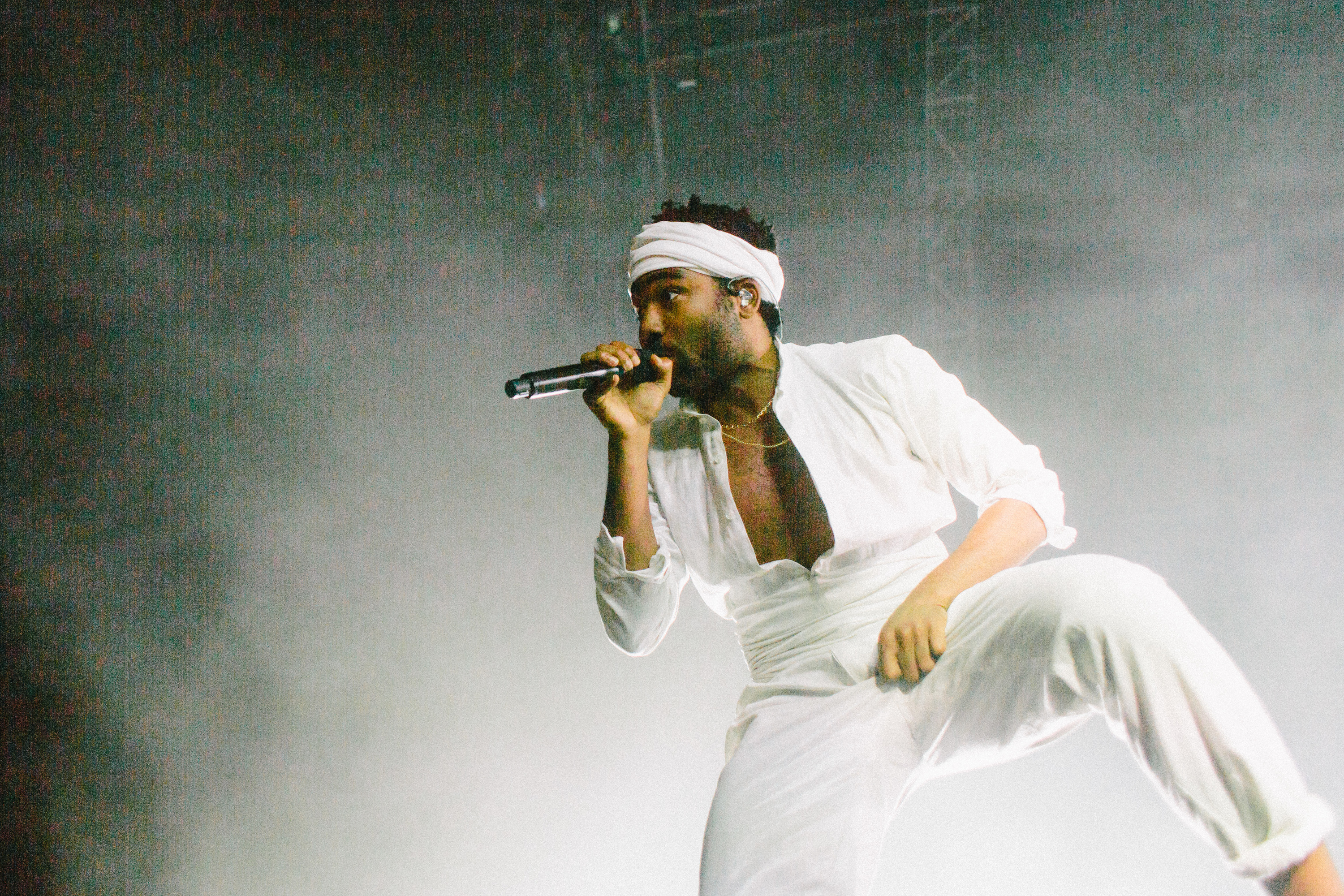 Governors Ball 2017 was filled with scheduling conflicts, perhaps the worst of which was the matchup of Childish Gambino and Phoenix on Saturday night. But for anyone who fell in love with the former's latest album, "Awaken My Love!," the choice was easy—and Donald Glover did not disappoint. Dressed in an all-white wardrobe and backdropped by the Funkadelic-inspired AML album art, he brought a funky, soulful magic to the stage that would be hard to imagine in an indoor venue. When his latest album dropped, many wondered whether or not Glover could actually hit the high notes in songs like "Redbone." To be sure, he can. He finished Saturday night's set with a stirring rendition of that very track, leaving the jaws of everyone in attendance on the ground. Before leaving the stage, Glover quipped, "I'll see you for the last Gambino album," hinting that his career as a musician may soon be coming to an end.—Clayton Guse 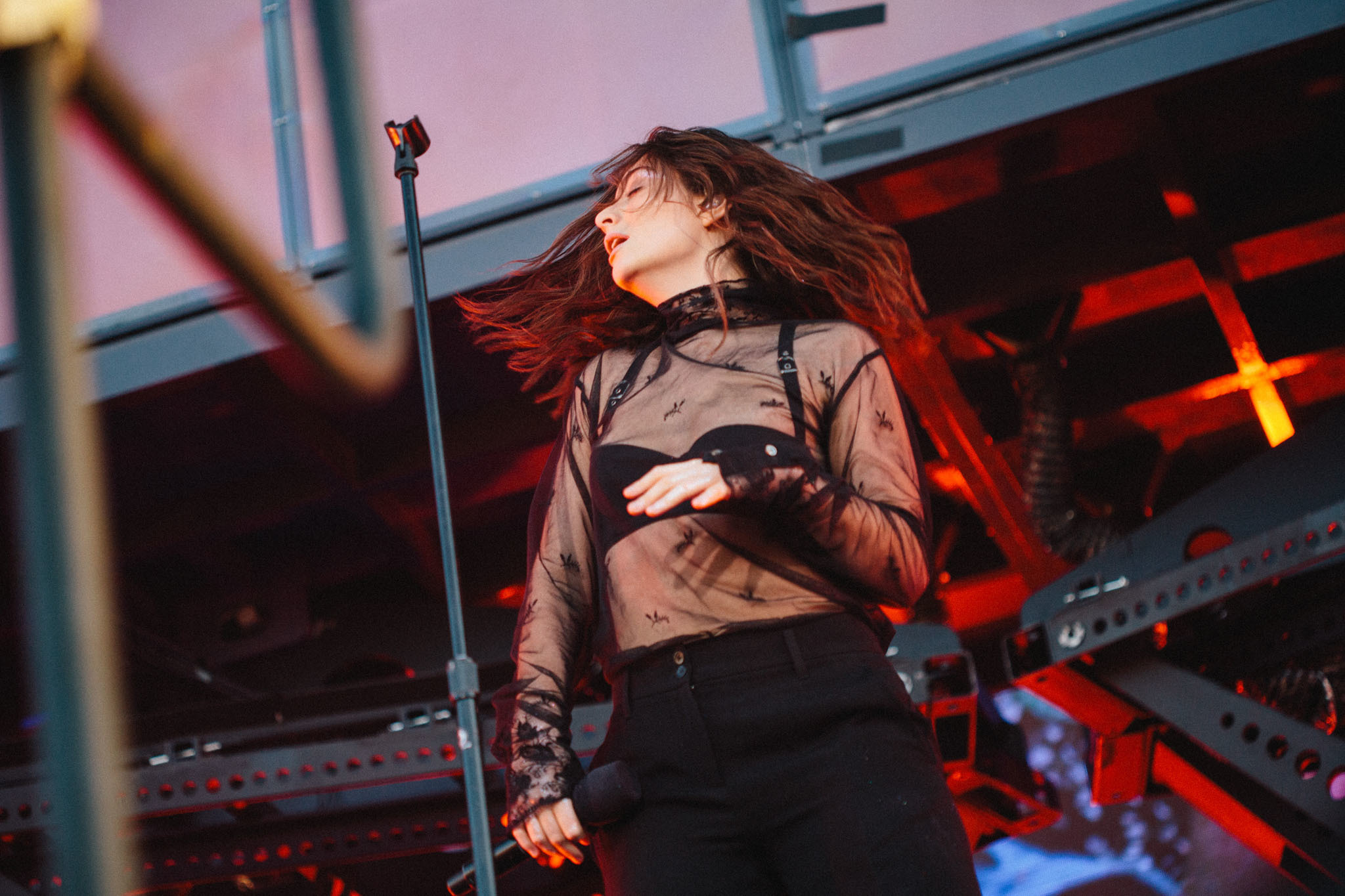 Appearing in a white veil, singing directly to a camera that relayed her image to the crowd, Lorde started off her GovBall set with the first few bars of her new single “Greenlight.” It was an intimate beginning to a masterfully crafted setlist, combining songs from her breakout debut and her forthcoming sophomore record, Melodrama. She stopped before reaching the song's chorus, pivoting to the sparse first-album single “Tennis Court” and leaving a tension that would remain unresolved until she finished the song for the set's finale. In between there were plenty of highs (“Buzzcut Season,” “Team”) but the undeniable highlight was her performance of “Liability,” the new album’s second single, with collaborator Jack Antonoff on piano. Here it came angrier and less delicate than on record, with a biting edge that solidified the tune as a soon-to-be classic. A cover of Robyn's "Hang With Me" got the same pared down treatment. On the other end of the spectrum, bombastic new songs “Perfect Places” and “Homemade Dynamite” (the latter heard only live, so far) succeeded in a totally different way, with huge cathartic choruses and big dynamic swoops, delivering the kind of release you get by teasing your new single quietly and finishing it an hour later with fireworks. The complete package indicates that Melodrama is going to be something special and worth the wait.—Andrew Frisicano 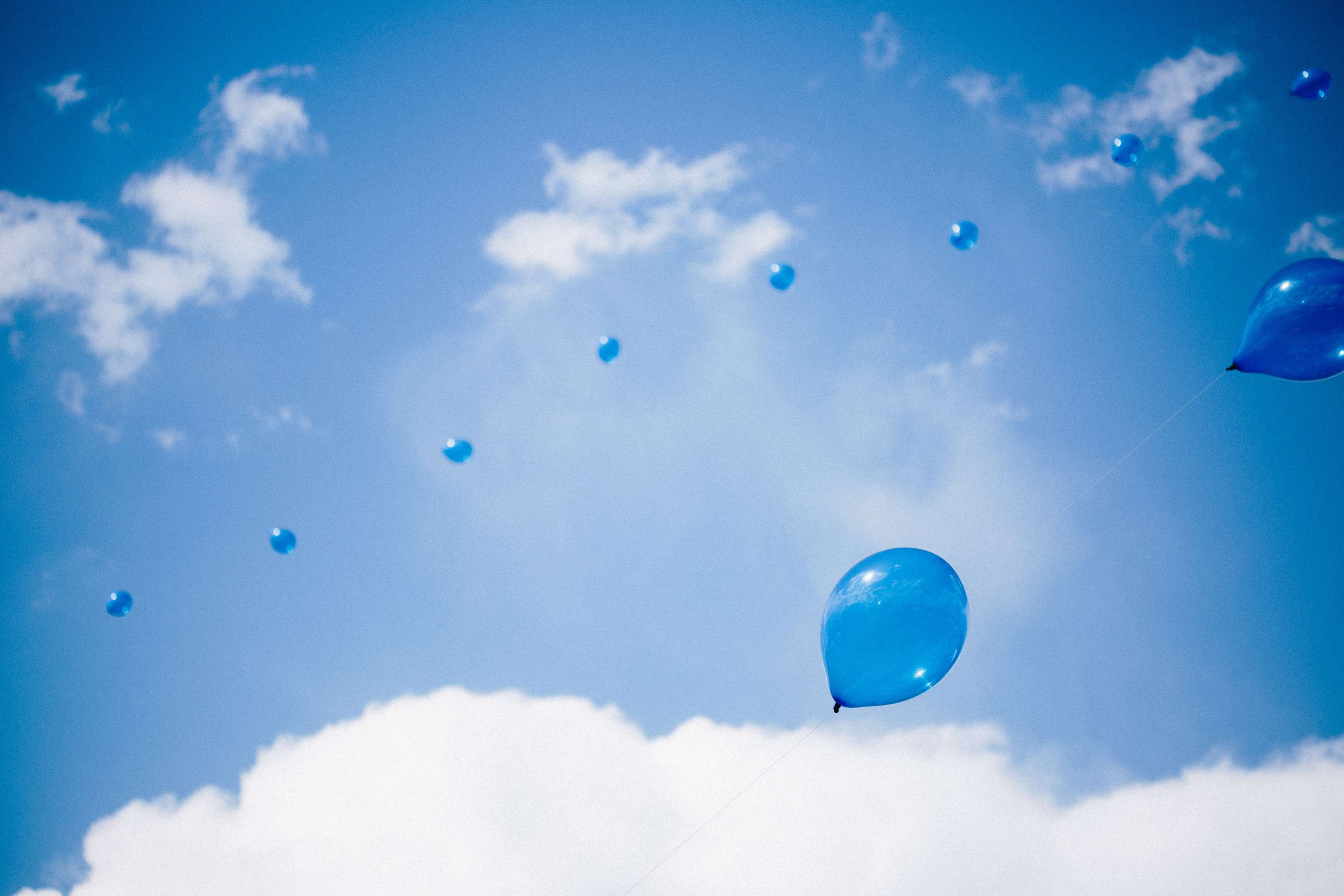 Summer music festivals are much more than a collection of great artists—they're a chance for thousands of people to congregate in a field and see some things that they might otherwise never witness. This weekend, several series of balloons tied together by ropes were one of those things. Attendees were allowed to take hold of the end of these ropes (while being supervised by event staff, of course), leading many to exclaim, "Oh my God, look! I'm holding a string of balloons." When the sun set, these suckers lit up in a display that made the weekend all the more magical.—CG

Francis & the Lights and “the Dance”

Since linking up with Chance the Rapper, Bon Iver and Kanye West for a series of songs last year, Francis & the Lights—a pop auteur with a confusingly plural name—has gotten as much attention for his dancing as his music. Granted, for Francis fans, the moves are nothing new: His music videos and live shows have always highlighted his unique footwork that's a mix of James Brown spins, ecstatic shakes and struts, and the sort of wild gesticulation you might see from someone being attacked by bees. Alone on the festival’s smaller, tented Bacardi stage, Francis covered a lot of ground, sailing across the platform for his ultra-funky Prince-like tunes “The Top” and “I Want You to Shake” and at one point shimmying into the crowd. The audience seemed to enjoy it, but when Chance the Rapper emerged at the end—for the choreography he and Francis perform on “May I Have this Dance”—a Beatlemania-esque swarm of young fans rushed the stage to capture the moment, some sprinting from across the field to catch a glimpse of Chance. They really liked that.—AF 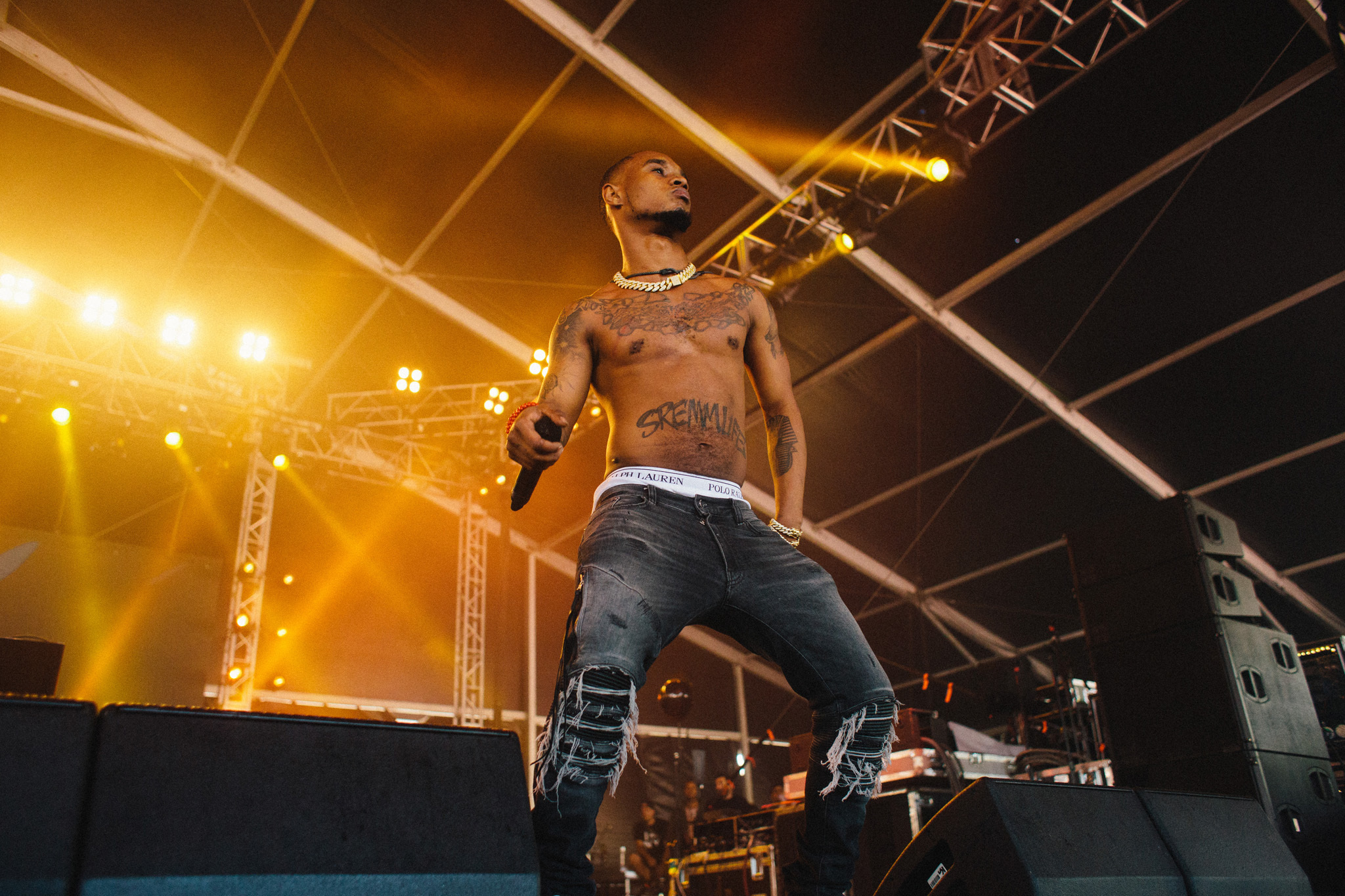 Rae Sremmurd wasn’t the only group paying a second visit to Governors Ball: Charli XCX, Local Natives and Beach House were all among this year's repeat bookings. But Atlanta duo's set underlined just how much its has grown in the past year. On the success of “Black Beatles” and other less viral but no less catchy tunes ("Swang" and "This Could Be Us," to name two faves), the brothers drew an overflowing crowd and spread their effusive energy outward.—AF

Getting to and from Randalls Island was not an easy task over the weekend. There were express shuttle buses running to and from the 125th Street subway station for a fare of $6.50 round trip. Hordes of wary music aficionados found themselves mimicking March of the Penguins as they walked over the RFK Bridge or the Wards Island footbridge after the fest. But for those who planned ahead, the ferry service that operated between the west side of the island and the East 34th Street ferry landing was a treat. The trip took a little more than 20 minutes, and offered stellar views of the city. If you're planning on heading to the fest next year, this is the way you should get there. —CG

Chance the Rapper for President 2018

The Chicago MC's headlining set on Friday was the only slot at this year’s festival without any competition, a welcome relief from some very tough conflicts throughout the weekend. Delivering part party, part sermon, with his backing band the Social Experiment providing constant instrumental filigree, Chance delivered a taut, focused set centered on Coloring Book, his free gospel-rap album that was well represented by ubiquitous 3 hats at the festival. A slideshow of the rapper with his mentor, Kanye West (who was billed to headline last year’s GovBall before a rain out) served as a mid-point detour into their collaborations. But again, the part that really got folks moving was the synchronized choreography of "May I Have This Dance," mimed en masse in the dark field, lit only by cell phone flashlights.—AF

Appearing as the lead in to Sunday's headliner, alt-metal institution Tool, French synth maestros Air performed captivating, wonderfully a weird set of slowed down tunes that were totally unlike anything else at the festival. The duo, playing as a quartet, made no moves to cater to its audience, exploring the sounds of its debut Moon Safari and other albums in languid detail, moving at a glacial pace and sounding utterly massive.—AF

“You can drive all night / Looking for answers in the pouring rain,” sang Cage the Elephant frontman Matt Shultz, emotively during his band’s strong, upbeat set Sunday evening. It’d been drizzling on and off during the day but amazingly, the grounds remained mostly dry. Besides a brief sun shower on Friday, this year’s Governors Ball avoided the wet weather that has popped up to hamper past editions. After mid-70s temperatures and sunny skies on Friday and Saturday, Sunday’s overcast setting was a welcome cool-down for the festival's last day.—AF