The absolute best of New York’s stand-up, improv and sketch shows from 2014

2014 was a hell of a year for comedy in NYC. The New York Comedy Festival came to wreak havoc on our rib cages; Time Out New York's very own Women of Comedy 2014 show saw the funniest women in the country take over the city; and every night of the week, hundreds of comics worked their guts out trying to make New York audiences laugh their asses inside out. From a year of awesome comedy, we picked the 10 shows that, even in such a talented and crowded field, stood head and shoulders above the rest. 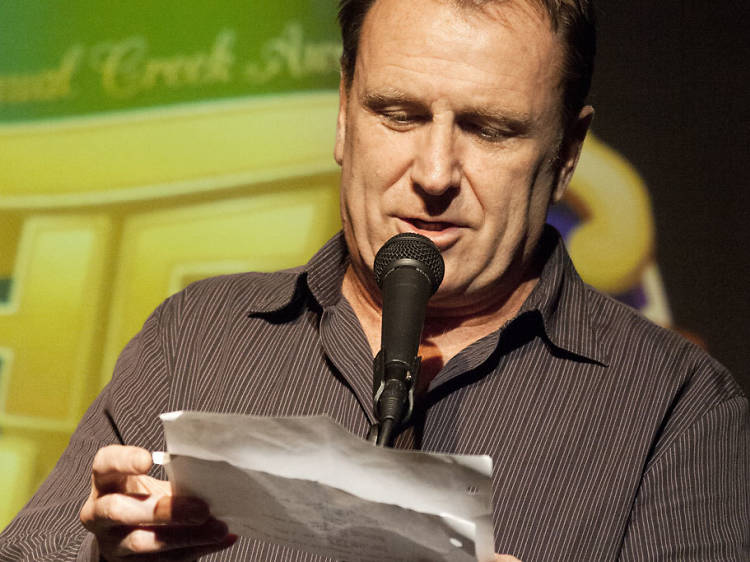 10. Week at the Creek at Creek and the Cave

Most comedy clubs book featured comics for weekend shows, but The Creek and the Cave is not most clubs. On top of their stuffed-to-the-gills calendar, the Creek gives an entire week’s worth of headlining shows to both professional and up-and-coming comedians to do with what they please. This past year took the concept to new heights, as it saw the likes of Colin Quinn, Laurie Kilmartin, David Huntsberger and Jon Laster program weeklong shows that ranged from the straight-ahead hysterical to the sublimely bizarre (looking at you, Deer Prom). We can’t wait to see who they bring along next year.—Tom Brink 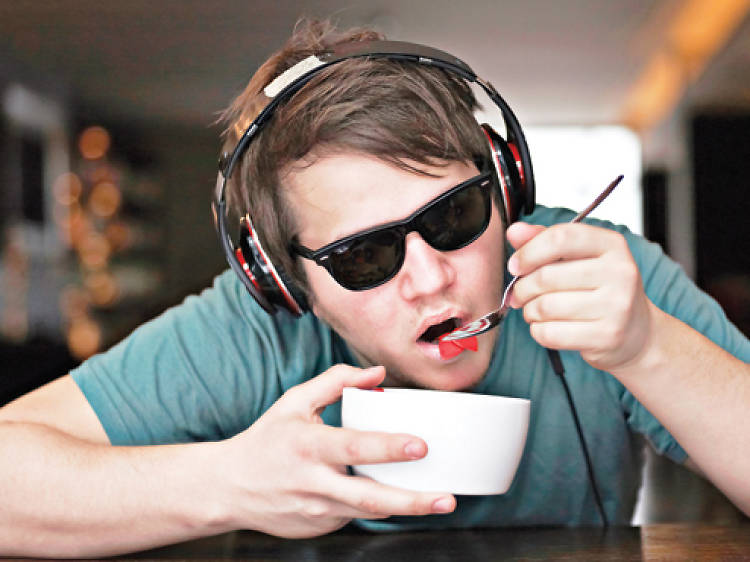 9. North Coast at the PIT

After almost two years of co-managing North Coast, Doug Widick and Jonathan Demuth have lost none of their enthusiasm. And who can blame  them? The hip-hop­–obsessed troupe—founded five years ago by James Robilotta—has hit new heights this year, blending astonishingly good freestyle skills with a talent for comedic absurdity that’s been blowing away audiences at The PIT, weekend after weekend. North Coast has proved so popular, in fact, that what was initially scheduled to be a two-month run back in August has now been extended well into 2015. If you can’t decide between going to a comedy show and going to a party, these guys have you covered both ways. Hands down, it’s one of the most fun shows we’ve seen all year.—Nick Leftley 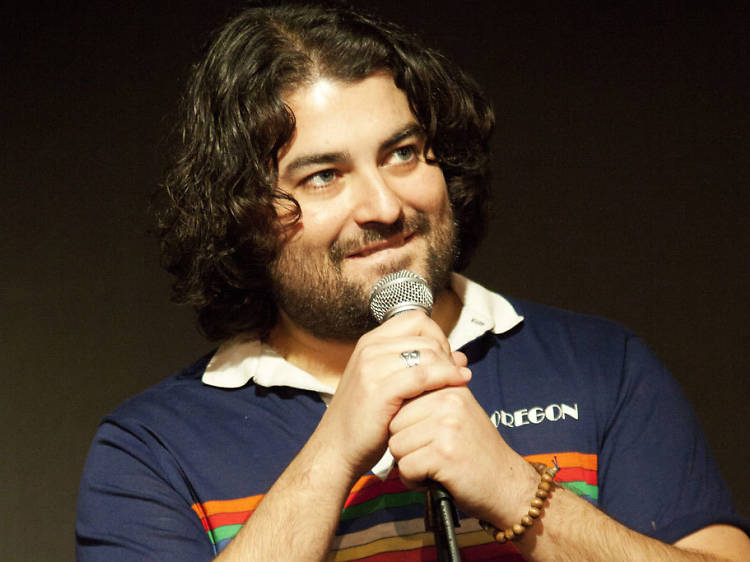 Here at Time Out New York, we’re big fans of Sean Patton, and we’re big fans of Deer Prom, Tommy Pope and John McKeever’s hilarious monthly variety show at Carolines on Broadway. So, obviously, seeing the two together was bound to be an experience, but when it actually happened back in July, it still blew us away. It was like no other comedy night we’ve seen: The audience, for whatever reason, seemed very much not to be in the mood for comedy (despite purchasing tickets to a comedy show), and each comic hit a stone wall. Until, that is, Sean Patton took the stage. He immediately charged the room with his incredible energy and passion, delivering the funniest bits and improvised riffs we’ve ever seen from him. It got to the point were he was basically wrestling the crowd into submission with his words and suddenly, like a shaken-up soda can, the audience finally exploded with laughter. If you ever wanted to see a lesson in forcing the audience to wake up and get onboard, this was it, and good God was it impressive.—Tom Brink 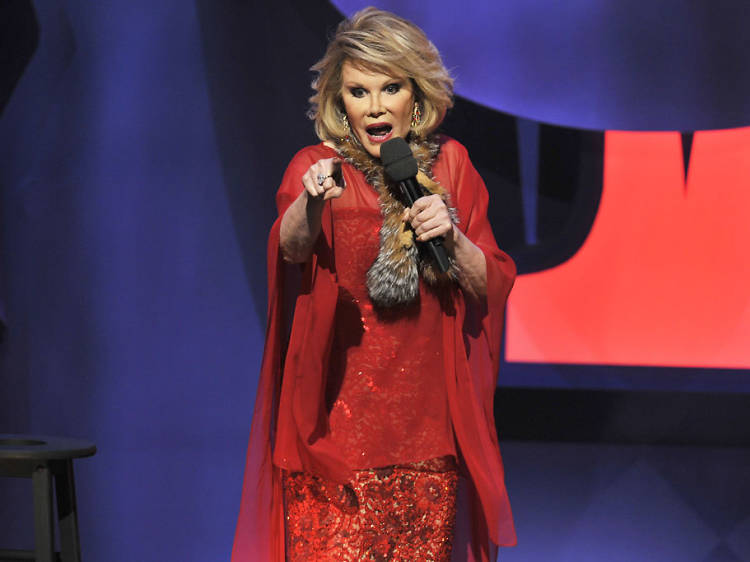 RIP, Joan Rivers. The most amazing thing about Rivers’s tragic death in September this year was how active she was right up until the end: Just two months earlier, she had a run of shows at the Laurie Beechman Theatre in which she still seemed to be bursting with energy, leaping around the stage and barely pausing for breath between merciless eviscerations of anyone sitting in the front row. Her endless self-mockery and the sheer joy with which she spat out her punch lines were a testament to a lifetime’s work in comedy, and it’s tempting to think that, even had she known how close the end was, she wouldn’t have done a thing differently. For Joan, the show must, and always did, go on. Those lucky enough to have been at these final shows will always be grateful to have witnessed them.—Nick Leftley 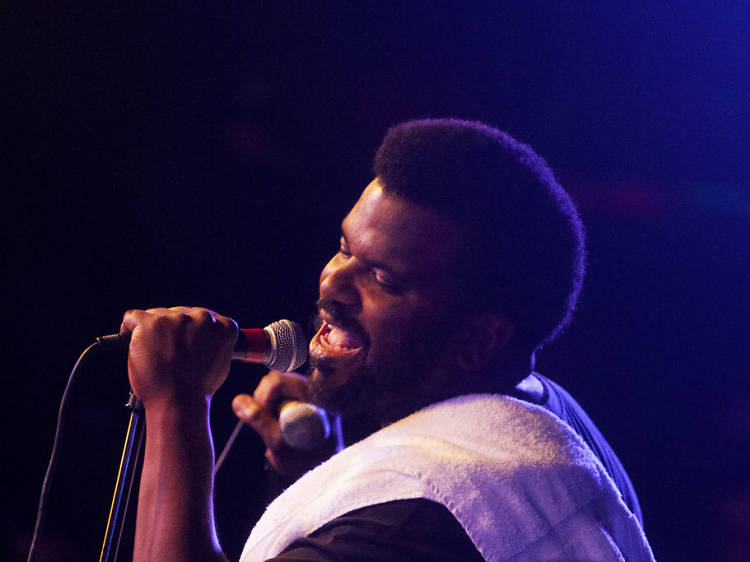 Over the last five years, Whiplash, the weekly Monday stand-up show at 11pm at UCB Chelsea, has become a staple of the New York comedy scene. It delivers incredible shows to packed houses every week, but this one night in June blew the other shows away. It started out promising as always, with Chris Gethard introducing comics like Hannibal Buress, but it was the last act of the night that cemented this show’s pedigree, as Craig Robinson closed out by inviting everyone onstage to dance while he delivered a jazz lounge style sing-along, teasing audience members and playing LL Cool J’s “I Need Love” on piano. He only stopped playing after the house lights came on at 1:30am so the crew could paint the stage, and even then he put up a fight about leaving. We just wish we had this whole night on tape.—Tom Brink 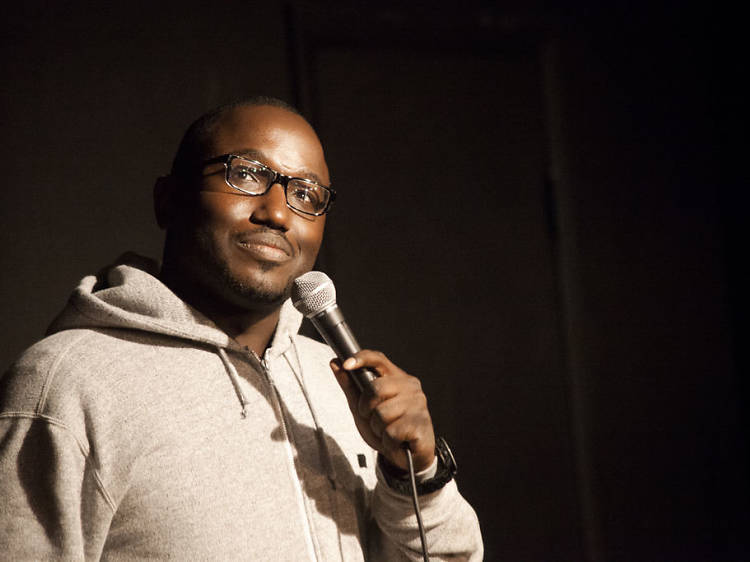 5. Hannibal Buress at the Knitting Factory

Hannibal Buress, host of the continuously awesome Sunday night comedy show at the Knitting Factory in Brooklyn, threw himself a birthday-bash show last May. Hannibal began the night in fine style by bragging about how he was the most recent person in the room to masturbate, then showing off a rap song he’d been working on. At this point, shit got real: He introduced Saturday Night Live's "Weekend Update" star Michael Che, the masterfully offensive Kurt Metzger, the legendary Bridget Everett and then, to close out the show, brought out his surprise guest, Method Man. If only our birthdays could be this cool.—Tom Brink 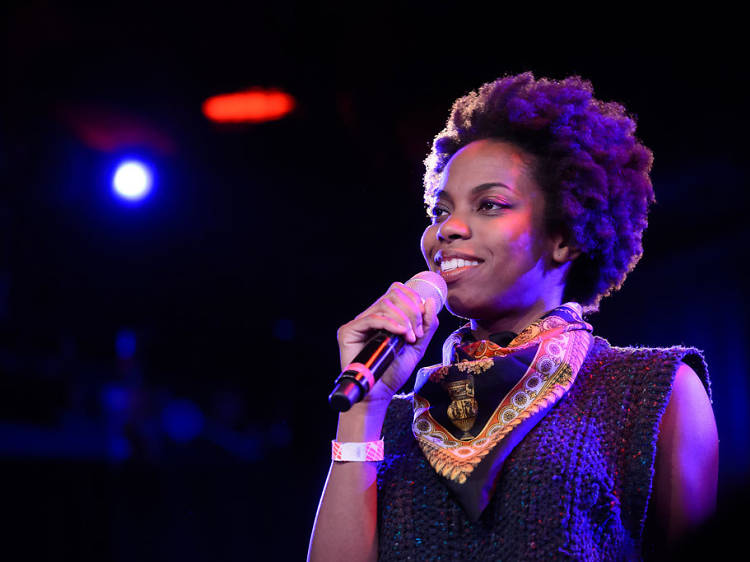 Not to blow our own trumpet or anything, but holy cow, these two shows were fun. Back to back on the same night at Le Poisson Rouge, the shows were sold-out affairs hosted by Robin Montague, featuring the phenomenally talented Sara Schaefer, Sasheer Zamata, Michelle Wolf, Aparna Nancherla, Bonnie McFarlane, Emmy Blotnick, Chloe Hilliard, Liz Miele, Charla Lauriston and Marianne Garvey. You can see some of the highlights in this awesome video.—Nick Leftley 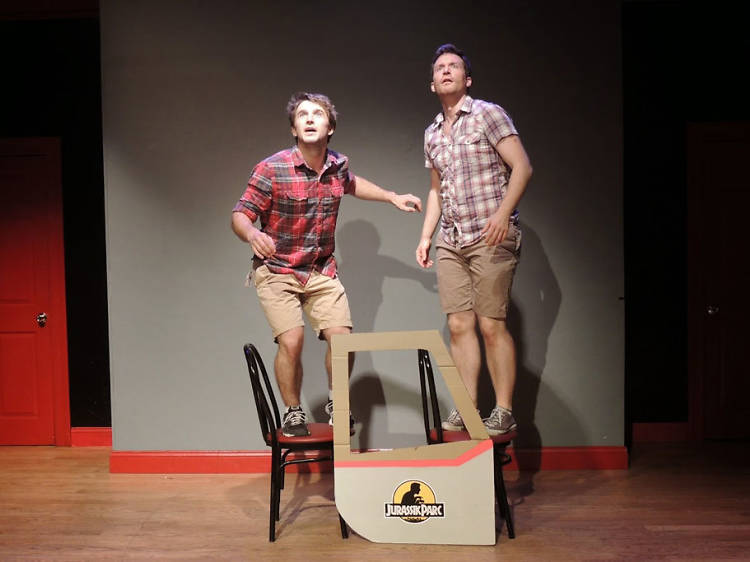 3. Hold Onto Your Butts at the PIT

In terms of shows that made us cry actual tears of laughter, none did the job like Hold Onto Your Butts. The short description is that Kyle Schaefer and Nick Abeel, with the help of Kelsey Didion’s sound effects, acted out the entirety of Jurassic Park scene by scene, playing every character (including the dinosaurs) between them. But that doesn’t even come close to doing justice to the level of invention and imagination that went into this show. From sexy Jeff Goldblum to sneaky velociraptors to the funniest use of umbrellas (both standard and cocktail-size) we’ve ever seen, it was a pure joy from start to finish. The good news? It’s coming back for a second run early in 2015. We can’t wait.—Nick Leftley 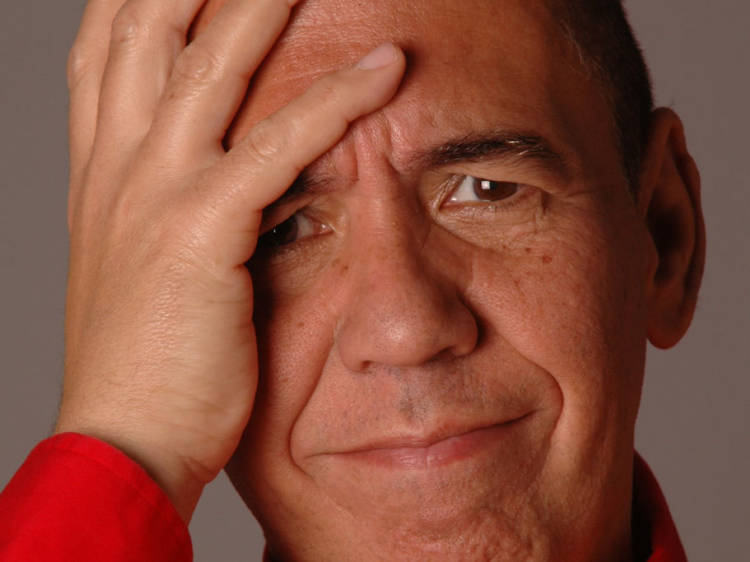 2. The Seven Dirty Words: George Carlin Finally Gets His Own Way at Carolines

2014 was already a great year for remembering George Carlin, as he got his own New York street back in October following a campaign by comedian Kevin Bartini and Carlin’s brother Patrick and daughter Kelly. But it was the tribute show at Carolines on Broadway later that night that left the real impression, as comedy legend after comedy legend took to the stage to sing Carlin’s praises: Colin Quinn, Ted Alexandro, Dave Attell, Eddie Brill, Jim Norton, Judah Friedlander and Rick Overton all killed, but it was Gilbert Gottfried who stole the show, winging his entire set, which consisted of nothing but his repeated and emphatic assertion that he was happy Carlin was dead, and his wish that he could have suffered more, reducing the audience to hysterics. The best part? Patrick and Kelly, watching from the wings, doubled over, crying, helpless with laughter. It really was one hell of a show.—Nick Leftley

There could only be one choice for the No. 1 slot this year: Tig Notaro’s groundbreaking Boyish Girl Interrupted show at The Town Hall. Notaro has dealt with personal tragedies over the past few years that would destroy a lesser mortal, including her breast-cancer diagnosis, her resulting double mastectomy and the sudden death of her mother. But somehow, she just keeps coming back stronger and, incredibly, funnier. At her New York Comedy Festival show, she brought her usual A-game—witty, deadpan humor, hysterically memorable observational stories, bizarre audience participation (at one point the audience was prompted to sing the chorus of “Yellow Submarine” while Tig pretended to be Ringo Starr’s wife)—but it was halfway through that the show hit legendary status. Prompted by whoops from the crowd, Notaro took her top off and performed the entire last half of her set shirtless, displaying her double-mastectomy scars. The sheer guts required for a comic to do such a thing in the middle of their set is mind-boggling, and the audience responded at the end with a standing ovation that lasted over three minutes. But still Notaro wasn’t done: She put her shirt back on, leaped off the stage and walked through the crowd to the lobby, where she stuck around to mingle with her fans. Tig Notaro was a much loved and respected comic before this show; now she’s an icon.—Evelyn Derico