Bianca Del Rio (the drag alter ego of Roy Haylock, 39) is perhaps the most beloved winner of RuPaul’s Drag Race to date—almost entirely in spite of herself. The New York queen has spent years honing her hilariously cruel persona in gay bars and clubs, but her turn on reality TV showed the world she had a softer side, as she helped her fellow contestants with their sewing and humbly apologized when her impeccably timed insults cut a little too close. On November 28 and 29, she starts doing some damage control on that sweet image with her first-ever night of comedy, Rolodex of Hate, which kicks off a nationwide tour at the Gramercy Theatre. She called us from a cab (slightly late and very apologetic, of course) as she was rushing across town between photo shoots.

How did Rolodex of Hate come together?
Since I started Drag Race, I’ve been able to travel the world doing sets of comedy—it wasn’t necessarily a full act, like a 20- or 30-minute spot in each city—and my manager came up with the idea, “What if we do a full stand-up special?” which I had never done. This whole Drag Race situation has given me the opportunity to do things that, in the back of my mind, I’ve always wanted to do. And this was just the opportunity that came up. So for the past few months, I’ve just been writing and compiling all my material. There’s endless things you forget about your life. Rolodex of Hate is basically how I ended up being so hateful. It’s a look inside.

Is it your greatest hits, or all new material?
It’s stories that I haven’t told. It’s things that basically make up and explain the way I am. It’s a little more detail-oriented than usual. I mean, usually I go into a bar or a space and I just do my thing—bam-bam-bam. This is a full hour, so it’s different for me, but I’m looking forward to it.

Will you show off a lot of new looks?
I’m going to do a change or two, but I don’t want the show to be a drag queen who’s a comedian. I want it to be a comedian who happens to be a drag queen. It’s less about the spectacle. Of course, I’ll have something nice to wear, but I have two outfits that I’m doing for the show in particular. Anytime you leave the stage, you kind of lose momentum, so I don’t want that to happen.

How has life changed since you won Drag Race?
Well, I’ve realized I can function with no sleep! And I’ve realized the show is huge in other countries, which is insane to me. In London, it just recently came out on Netflix. So [until now] everyone was illegally downloading it. I was unaware that that many people were so interested in the show. Americans are so lazy; the only thing we download is porn. Oh, and how kind people are! To go around the world and everybody wants to say hello, everybody wants to take your picture, everybody’s rooting for you.… I’ve been in my own little bubble for so many years. To get this exposure has totally shifted my life, but I’m grateful that it happened to me at this point—and at my age, rather than being 20. I think I appreciate it more now than I ever would have.

How did you feel watching the show versus how it actually felt when you were filming?
It’s an emotional situation when you’re there, and it happens rather quickly. So it’s scary sometimes the choices you make. Because there’s so much time between the filming of the show and when it airs, I forgot things that I had said and done to the extent that they were shown. But I was well aware while I was there that that’s what was going to happen. I mean, it’s a reality-TV show. So I agree partially [with Courtney], but I also think you have to realize that that’s what you signed up for.
Do you think there’s going to be a point when you’re back in New York doing regular weekly shows?
I’m not opposed to anything. I’m grateful to the bars here that I worked at prior to Drag Race, and when I am in town I do come back and do the nights when I’m available. It’s just been insane with the travel schedule. Of course, New York is my home, so I’m not leaving here anytime soon—unless some amazing offer comes my way. It’s great to come home and do things when I can, but lately it’s just been—thankfully—a little busy everywhere else.

Do you know what you’re doing with the $100,000 Drag Race prize yet?
Let me tell you, I’m grateful that the check cleared! I haven’t had any time to spend any of the money, and tax time isn’t going to be cute. The ideal thing? I should put a down payment on an apartment, which is an adult thing I want to do. But as of now, I just haven’t had a chance to spend any of it!

So if you buy an apartment, what neighborhood are you looking at?
I have no clue! I live in Hell’s Kitchen now, and I love it. It’s pretty central and easy to get anywhere. But I’m not opposed to anything.

You’re from Louisiana originally. How did you end up in New York?
I was living in New Orleans and working, doing five nights a week for 10 years in a bar, and doing costumes and wigs and stuff there for the opera and the ballet. And then the hurricane hit, and we weren’t allowed back into the city at the time. I didn’t experience any trouble, I didn’t lose anything or anything on that level, but we weren’t allowed back. So I visited some friends in Atlanta, and I had a friend in New York who said, “Why don’t you come up here and kill some time and figure things out?” So I came to New York, and I decided if I can get an apartment and get a job then I’ll stay. And within three weeks, I did and that was it. I was ready for a change. I was 30, and I felt that what I was doing in New Orleans was great, but it was like the golden handcuffs. Nothing would have shifted. I would probably have stayed and continued doing it. I was getting paid well and treated well, but I thought, You know what, let me try something else. And the energy just felt right when I got to New York. I thought, Well, shit or get off the pot.

So the city is home now?
I always say New Orleans is my heart. It’s where I’m from. I go back, and I have a huge fondness for it. But New York is where I’m based now. I’ve been here nine years!

How did you become Bianca?
How did I become Bianca? Oh, God. I was in theater doing shows, and there was a gay wedding happening in New Orleans, and they needed a drag queen to do a number. I had never done it at the time, although I did have the makings of a drag queen—sewing and wigs and all that kind of magic. I was kind of pooh-poohing the idea going, “Nah, I don’t want to do it.” But then they said it was $500 and I said yes. [Laughs] Some people who were at the wedding worked at the local bar and they asked me if I wanted to do a guest spot, and that just kind of snowballed into my life. First it was one night a week, then it was two nights a week and then it became five nights a week. It was this insane process, and this whole time I was always working in costumes during the day and it’s been this balancing act for a long time. And both career choices could go up at any time. You have good moments and bad moments. It’s not like they’re stable gigs, the theater and drag, so I always did both to kind of round out my life. It’s worked out well.

Do you have any Thanksgiving plans while you’re in town?
No! Because I’m working on the show. I’ll be alone, which is good. I’ll have to get into the zone. I’ve got three days where I’m in New York and I’m not going anywhere. And that’s going to be my last, like, moment to get it together. 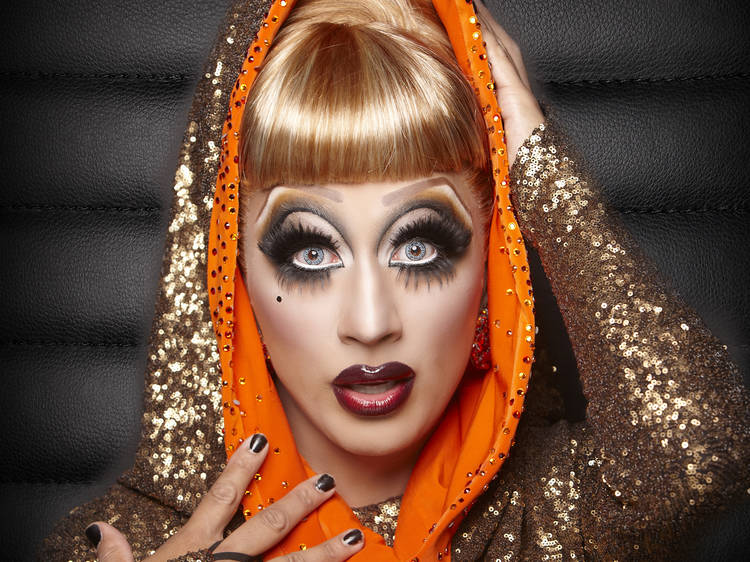 An Evening With Bianca Del Rio: The Rolodex Of Hate Tour