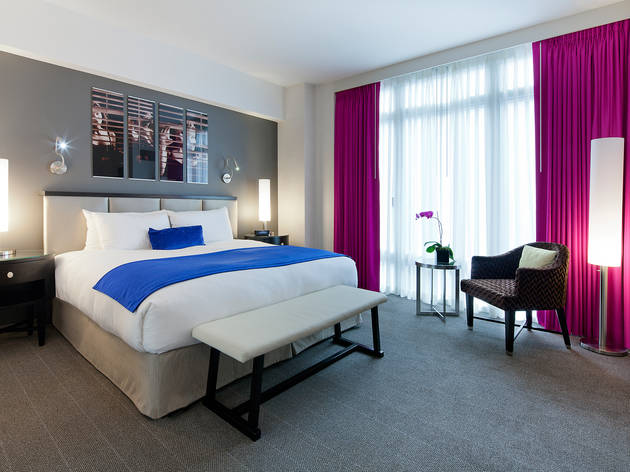 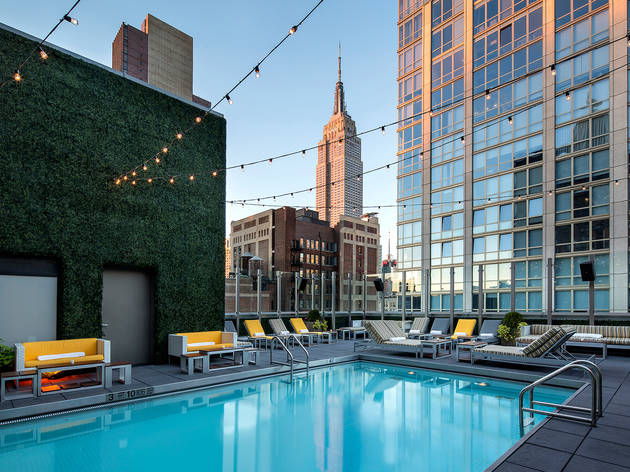 If you’re looking for the epitome of Manhattan chic, boutique, and beautiful, there can only be one: the Gansevoort Park Avenue—the six-year-old sister hotel to the other Gansevoort located in the Meatpacking District. Found at the southwest corner of 29th Street off Park Avenue South, the modern lobby greets you in a bevy of blacks, maroons and browns: tall columns, high ceilings, two massive purple crystal chandeliers and a black-and-white zig-zag pattern on the floor. A horizontal gas-lit fireplace sits at the back end of the sitting area, which is decked out in plush couches and chairs. Immediately you feel like you’re in good hands. With a plethora of doormen and attentive staff behind the front desk, there’s no shortage of personal attention paid to every guest that walks through the revolving doors.

The rooms are perfect for that weekend staycation or quick business trip; clean touches abound. Muted grays off-set the photography on the walls, giving the minimal décor a splash of vibrant color. The main draws of the hotel—and there are many—are the three levels of fun on top: six event spaces and terraces, lounges with fireplaces, and a heated indoor-outdoor pool with unobstructed views of the Empire State Building. It might have been winter when I visited, but I could only imagine how these top floors look in the warmer weather. Other hotel perks include a Lacoste store, a Flywheels Sports to get your gym on, an Exhale Spa for, well, getting your spa on, and Asellina, a sleek, 10,000-square-foot Italian eatery from the One Group (STK), coated in numerous shades of browns, wood décor throughout the space and a giant copper-colored wall covering made up entirely of bottle caps.
Since the hotel sits on the eastern-most part of NoMad, it’s easily accessible via mass transit with a 6 train one block away on 28th Street and Park; the R and W trains on 28th and Broadway two blocks west; and for those adventurous enough to drive in you can grab the Midtown (Queens, Brooklyn, Long Island) and Lincoln (New Jersey) Tunnels on each end of 34th Street. Madison Square Park (which has the first ever Shake Shack location) and the Flatiron Building are just a few blocks away and the hotel is a leisurely stroll to Union Square.
TIME OUT TIP: Given its location, you are in walking distance to a number of cool eateries and shops. Check out the The Cannibal on 29th between Park and Lexington Avenues, a Belgian gastropub with a tremendous beer list from the Resto guys; or Blue Smoke (26th between Park and Lexington), Danny Meyer’s ode to BBQ that also features a jazz club. (Try the Pit Stop, which is one meat and two sides.) For the fashionista, head on over to Dover Street Market on Lexington and 30th Street and enjoy the showcase of fashion-forward brands like Balenciaga and Commes des Garçons.
Share Tweet