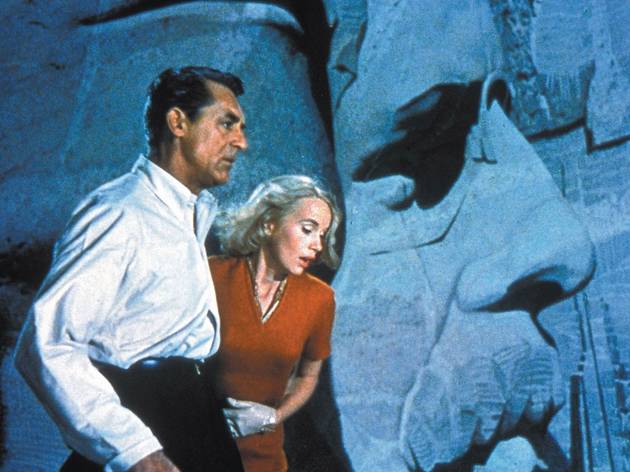 If there’s a thriller out there more exhilarating, sexier or packed with iconic moments than this one, we’ve yet to see it. The greatest joy in Alfred Hitchcock’s spy caper is how effortless it all feels: a gliding magic-carpet ride from New York to Mount Rushmore, via Chicago and a Midwestern bus stop, as Cary Grant’s ad man suffers a potentially fatal outbreak of Wrong Man-itis. Of course, making a movie this effortless is hard work. It’s all a tribute to Hitch and his ensemble of behind-the-camera talents, including screenwriter Ernest Lehman, Saul Bass (designer of the graphically arresting title sequence) and Bernard Herrmann, whose score lends menace and levity in equal measure. And the cast? Eva Marie Saint, James Mason, Martin Landau and Jessie Royce Landis—heroes, villains and worried mothers, they’re all having a ball. But it’s Grant’s movie: a Hollywood A-lister happy to be the punchline when the scene calls for it.—Phil de Semlyen

The killer moment: It has to be the crop-duster sequence, which begins like a Western standoff and ends with the suavest man in cinema face down in the dirt. 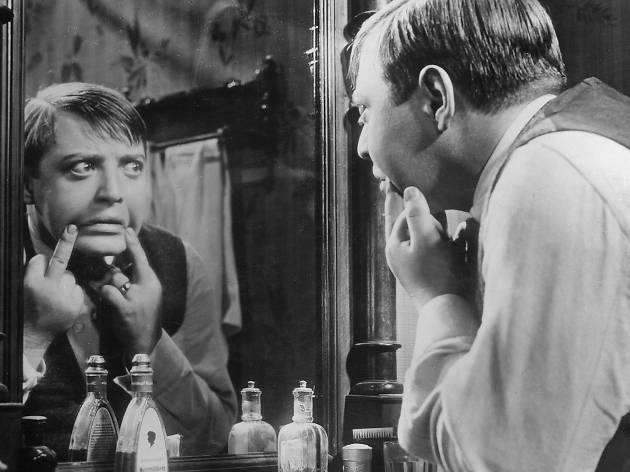 Several real-life child murderers, cannibals and serial killers terrorized Germany in the 1920s. (Their nicknames are grisly enough: the Butcher of Hanover, the Vampire of Düsseldorf.) Berlin's most moneyed and celebrated director, Fritz Lang, was drawn to the subject, which would become the spine of his first sound film—in many ways the birth of the modern psychothriller. M is cinema’s darkest landmark: a portrait of awful appetites that was revolutionary for also being an oblique mirror on society at large. (Filmed under the working title Murderer Among Us, Nazi party members refused Lang studio space.) The movie is immortal for Peter Lorre’s career-defining performance as Hans Beckert, trapped by sweaty urges and a dragnet of cops and mobsters. Lang also turned Edvard Grieg’s "In the Hall of the Mountain King"—whistled by Beckert, but not Lorre, who couldn't whistle—into an instant signature of aural menace.—Joshua Rothkopf

The killer moment: In front of a wanted poster, a dark silhouette appears. Leaning down, Beckert lures a child into conversation: "What a pretty ball you have there." 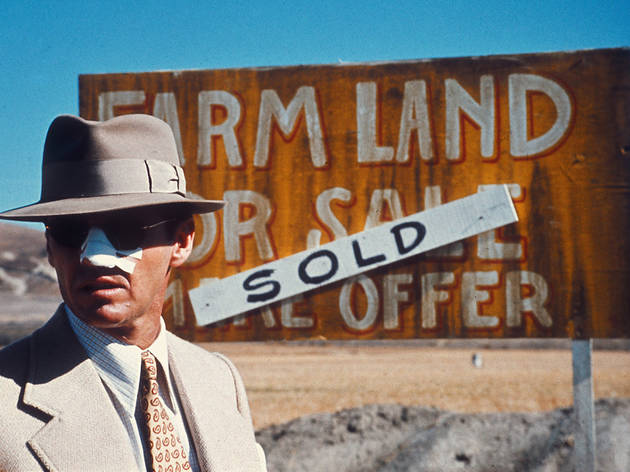 The absolute zenith of New Hollywood’s 1970s-era adventurousness (it was all downhill from here), Roman Polanski’s majestic conspiracy thriller is the ultimate L.A. movie, locating seediness under the sun—even in the water. Robert Towne’s well-researched screenplay about land grabs, murder and one “nosy fellow” remains the gold standard for aspiring writers hoping to grab a whiff of sociocultural currency; watching Chinatown is, for some Angelenos, like learning that you live in a stolen paradise, or maybe hell itself. But for all the movie's substance, it took a rascally Jack Nicholson, an absorbingly skittish Faye Dunaway, a fearsome John Huston and Polanski himself (working at the peak of his powers) to sock it over on audiences. The movie shimmers like a ’30s period romance but its veins pump black bile: a toxic masterpiece.—Joshua Rothkopf

The killer moment: A withering Noah Cross makes his sole priority clear to our hero: “The future, Mr. Gittes! The future!” 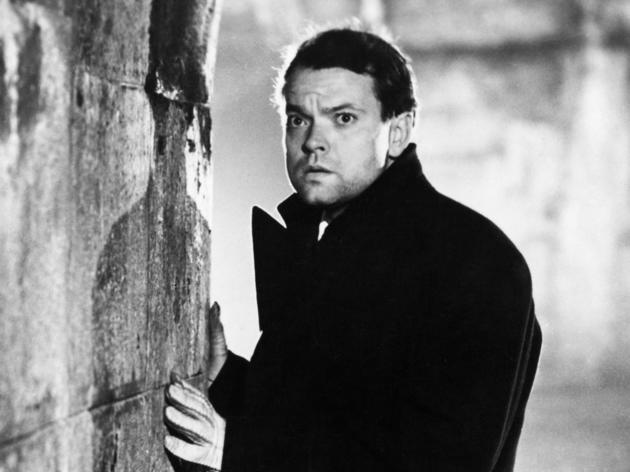 Set in a post-WWII Vienna filled with canted angles and stark shadows, The Third Man is expressionist perfection. Orson Welles’ performance as Harry Lime—thought to be dead by his childhood friend, Holly (Joseph Cotten), only to make a dramatic return—is one of cinema’s best. Welles swaggers through the film with cool self-assurance and delivers many an iconic line in his famous baritone. Faking one’s death is, of course, a risky proposition, and it’s challenging to present it believably. Director Carol Reed makes us totally invested in Lime’s fate, thrilling us with every plot twist. After watching this utterly engaging film, you’ll never look at tunnels or Ferris wheels (or hear zither music) the same way again.—Abbey Bender

The killer moment: After riding the wheel, Welles makes his famous quip (ad-libbed on the day), comparing violent Italy under the Borgias with peace-loving Switzerland. “And what did that produce? The cuckoo clock.” 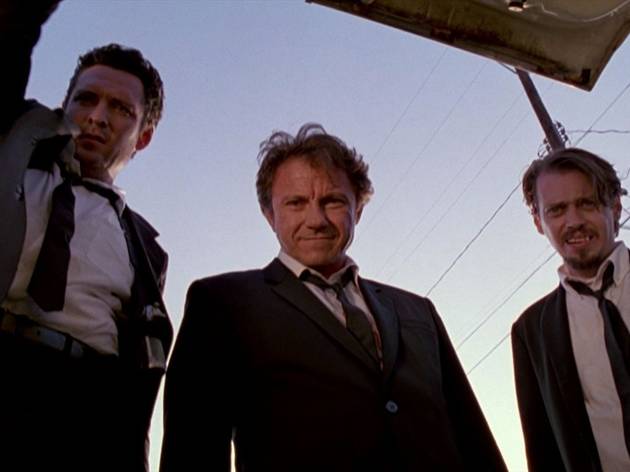 Nothing about Quentin Tarantino’s breakthrough was exactly new: The suits were pure Rat Pack, the dialogue was Scorsese intensified and even the plot was lifted from a Hong Kong crime flick by Ringo Lam called City on Fire. But like household ingredients blended to make a bomb, the result was incendiary. Reservoir Dogs changed cinema, and we’re still dealing with the aftershocks (see the smooth criminals of Baby Driver or the entire career of Three Billboards’ Martin McDonagh for evidence). But even if none of that were true, it’s still such a joyful film to experience and re-experience: Every line crackles like electricity, every performance is punchy perfection and every shot feels like a bracing bucket of water in the face. Tarantino hasn’t come close to it since—but neither has anyone else.—Tom Huddleston

The killer moment: Too many to mention, but the off-camera ear-slicing scene set to the peppy “Stuck in the Middle with You” will go down in history. 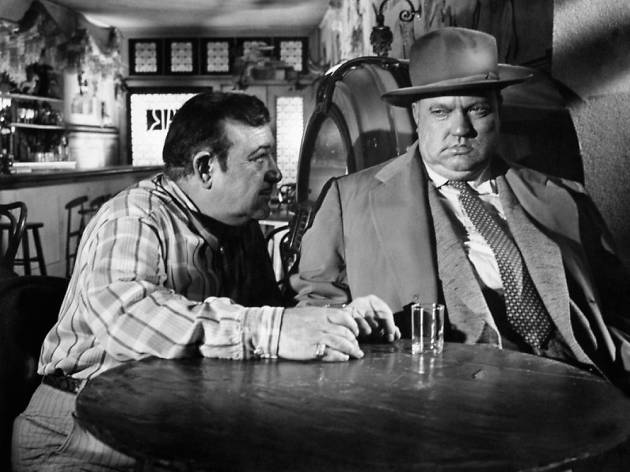 Famously, Orson Welles’s involvement in this magnificently sleazy borderlands crime flick was meant to be strictly in front of the camera: He was hired to play Hank Quinlan, the grotesque corrupt sheriff, and nothing more. It was star Charlton Heston who lobbied for Welles to be handed the directorial reins, and who backed him—at least initially—against interference by the studio, Universal. (It almost makes up for all of Chuck’s gun-toting NRA antics, but not quite.) The result was an impossibly rich Welles movie that could be held up to Citizen Kane: a brutal, explicitly sexual crime story; a satire on race and prejudice; a sad-eyed lament for wild pre-conformist America; and one of the most gorgeously directed films of all time—even the dialogue scenes play like ballet. Not that Universal noticed. They eventually recut the film against Welles’s wishes. It’s only in the past two decades that we’ve been able to appreciate this masterpiece nearly as its creator intended.—Tom Huddleston

The killer moment: The legendary opening tracking shot—an uninterrupted three-and-a-half-minutes following a bomb’s delivery in a car trunk—is the obvious choice (and the correct one). 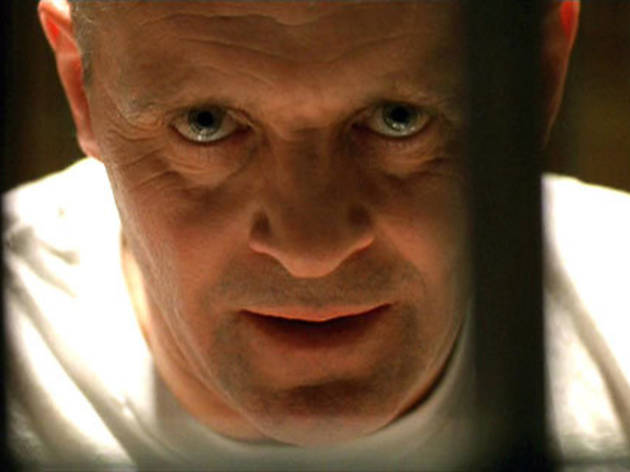 Set in a troubled America that hides an undercurrent of violence under its skin, Jonathan Demme’s taut serial-killer procedural borders on Grand Guignol horror. Unconventionally finding its savior in the shoes of a female law enforcer—FBI trainee Clarice Starling (Jodie Foster, blending strength and vulnerability)—The Silence of the Lambs divides its terrors between grotesque moths, a blood-curdling butcher of women and the cannibalistic Dr. Hannibal Lecter (Anthony Hopkins), a nightmarishly manipulative collaborator with a taste for liver and fava beans. Featuring exceptional cross-cutting leading up to its grand finale (a twisty reveal sends shivers down your spine), Lambs is one of the greatest movies of the ’90s, and the rare thriller to be recognized at the Oscars in a major way.—Tomris Laffly

The killer moment: Using night vision, Buffalo Bill pursues Clarice in the dark. In the seconds that follow, no one dares to breathe. 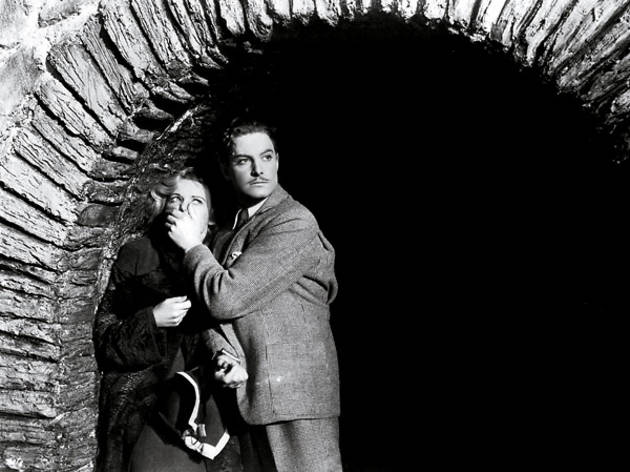 Alfred Hitchcock’s early thriller—the best of his British-made films—places a hapless innocent in the center of a spy plot, cementing many of the hallmarks of the genre. The “wrong man” plot is a Hitchcock staple, automatically investing us in the onscreen thrills: Will our hero will find a way out of a perilous world? There are moments of droll humor here, as when a hymnal in a coat pocket conveniently stops a bullet, mixed in with nail-biting suspense, and of course there’s a magnetic blond (Madeleine Carroll) who becomes entangled in the action. All of these elements add up for a wild ride that represents one of the most complete flourishings of the master’s style.—Abbey Bender

The killer moment: The opening scene, set at a performance by the mentalist “Mr. Memory,” is quickly interrupted by gunshots, immediately kicking off the plot with a flawless set piece. 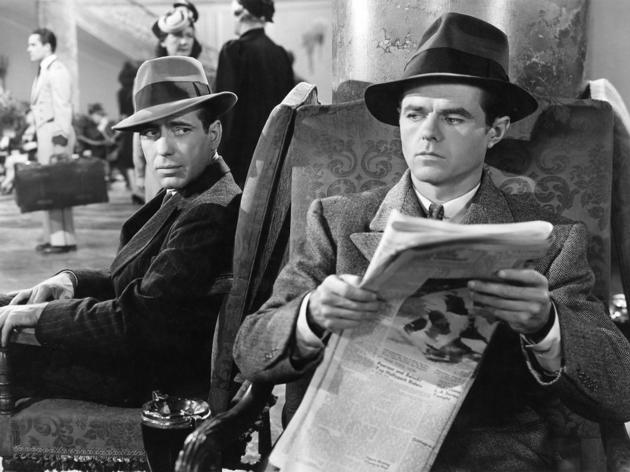 John Huston’s magnificent adaption of Dashiell Hammett’s noir has so much going for it, it’s hard to know which parts to praise first: The plotting is drum-tight; the villains are indelibly sinister and slippery (especially Sydney Greenstreet’s “Fat Man” and Peter Lorre’s Joel Cairo); Mary Astor’s femme fatale is a sexy amoral joy; and the titular MacGuffin, a black statuette, is so iconic, the prop itself fetched $4 million at auction. (That’s a lot for a 12-inch bird that was once dropped on Humphrey Bogart’s foot during shooting.) How about the hero, then? Sam Spade is everything you want in a noir gumshoe: whip-smart, hard-bitten, cocky and unfazed by that pea-shooter you’ve got pointed at him. It’s not even that he’s a particularly good guy, it’s that everyone else around him is so much worse. Bogie’s Spade was the embodiment of a new kind of Hollywood protagonist to emerge during the war years: a man who can slip from heroism to obnoxiousness and back again, all during the same slug of whisky.—Phil de Semlyen

The killer moment: “What is it?” a detective asks of the falcon. Spade answers, immortally: “The stuff that dreams are made of.”

A creepy boarding school, a monstrous headmaster, his quietly fed-up wife, another disgruntled lover—thrillers rarely come better stocked for suspense. France’s own Alfred Hitchcock, Henri-Georges Clouzot, subversively teams up the timid spouse (Véra Clouzot, the director's wife, playing a plain Jane in braids) with the hedonistic mistress (Simone Signoret, sporting a contrastingly provocative look) for a vengeful murder scheme against their common enemy. Clouzot uses every device at his disposal: eerie corridors, grimy swimming pools, ear-splitting kids. The result is a truly scary thriller that influenced Psycho. Clouzot’s fiendish nail-biter climaxes with such a domino chain of reversals, it even had a title card at the end asking the audience to not spoil the film for others. Don’t expect to know who’s deceiving whom until the last frame.—Tomris Laffly

The killer moment: Unforgettably, the headmaster’s white-eyed corpse rises up above the surface of a bath—but not as the ladies planned. 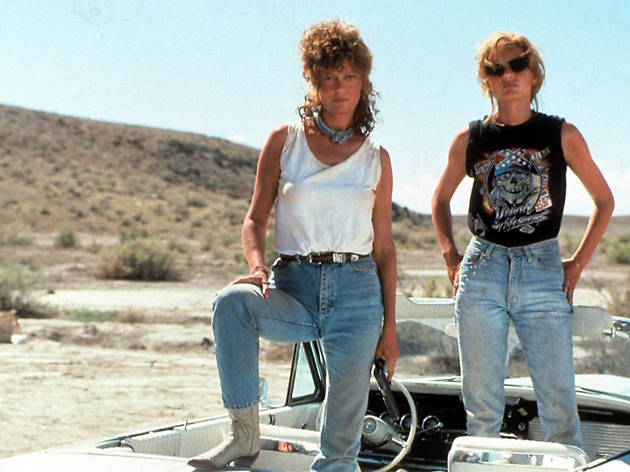