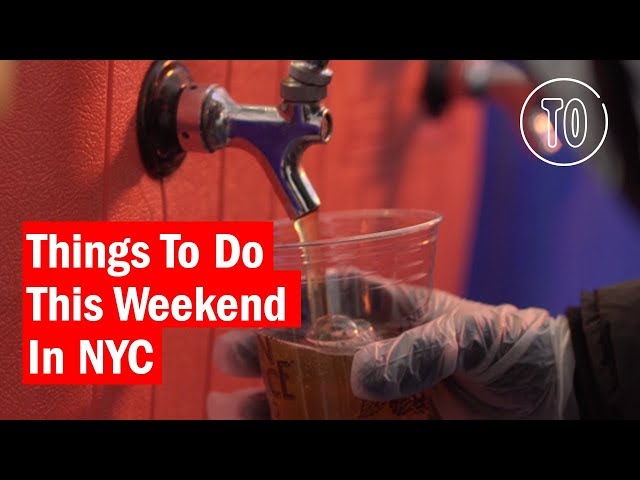 City of Tomorrow Summit 92nd Street Y; 5pm, tickets from $50
Have you ever wondered what the new Penn Station will look like? The Vessel at Hudson Yards? Well here's your chance at the “City of Tomorrow” Summit at 92Y featuring architects, real estate developers and designers. Join panel discussions and interactive workshops, learn about plans for transportation hubs at JFK and LaGuardia airports, attend seminars on real estate secrets, sustainable design and much more. One or two-day passes are available.

The New York Times Travel Show Javits Center; 10am, various prices
Celebrating 15 years, the New York Times Travel Show is back with more than 550 exhibitors sharing tips of the trade. There will be live seminars featuring Zac Posen, Andrew Zimmern, Samantha Brown, Pauline Frommer and others; cultural performances; culinary demonstrations and tastings; travel advice; travel deals and more. Receive a special discount of $5 off your ticket purchase with code SOCIAL.

Winter Carnival at Bryant Park; noon; free
At the always-festive Winter Carnival at Bryant Park, you can take free curling lessons, drink hot chocolate and enjoy some of the best seasonal ales at the Outdoor Winter Brew House. There's special skate performances including a strong lineup of entertainment, including a silent disco. Dine on mouthwatering fare from local vendors and play some board games once the post-skate exhaustion sets in. Another draw: Step inside a life-size ice castle!

Destroyer Brooklyn Steel; 7pm; $25
Dan Bejar, a collaborator with The New Pornographers and an idiosyncratic Canadian singer-songwriter who makes music as Destroyer, let loose on his last album, Poison Season, channeling "Born in the USA"–Springsteen via a howling horn section and pounding drums. On his newest album, Ken, however, he turns back towards the sounds of 2011's Kaputt, a dynamic, mature interpretation of ‘80s soft-rock, full of smoky, monochrome synths, cryptic murmurings and muted sax lines.

Xenia Rubinos + Adam Schatz’s Civil Engineering Merkin Concert Hall; 7:30pm; $25
Ecstatic Music Festival, a series that not only acknowledges but positively celebrates the erosion of stylistic boundaries and the rise of profligate collaboration, opens its eighth season with an exciting lineup of local songsmiths. Both Rubinos, who splits the difference between jazz fusion and Tune-Yards–like vocal experimentation, and multi-instrumentalist Schatz perform with his large ensemble Civil Engineering.

A Sinking Star Hudson Guild Theatre; 8:30pm; $23
Have a laugh at an unravelling marriage (ha?) at this short comedic play by Alison Lowenstein. A Sinking Star is performed with four other short plays as part of the Winterfest Festival. Killian Lock, Madalyn Pedone and Bianca Roses star in the breakout show.

The Last Laugh Peoples Improv Theater; 8pm; $8
For a night of killer laughs from a great variety of acts, look no further than the PIT's weekly getdown, hosted by Gianmarco Soresi and Jay Schmidt. Past guests have included Aparna Nancherla, Christian Finnegan, Jena Friedman and more.

Just a Show Sunnyvale; 5:30pm; $6
Head to Sunnyvale on the last Sunday of the month for an experimental evening of bizarre and hysterical comedy hosted by Harris Mayersohn and Jessy morner-Ritt. This month's edition features Josh Gondelman, Ana Fabrega, Rebecca O’Neal, Mary Cella, Sachi Ezura, with videos from Tynan Delong.

Bridget Everett and the Tender Moments Joe’s Pub at the Public Theater; 9:30pm; $35, plus $12 minimum
The astonishing, totally fearless Bridget Everett has had a bona fide breakout year in film (Patti Cakes) and TV (Lady Dynamite), culminating in the pilot of an Amazon series of her very own, the endearingly raunchy Love You Too. The towering sex goddess's triumphant set at her usual stomping grounds, Joe's Pub, finds her belting and oversharing as only she can, and she never fails to shake up the room with hits like "Boob Song." Not to be missed.