New York City in 1977 was, among other things, a tale of two nightclubs. In midtown, the new Studio 54 amplified disco’s penchant for glitter and glam just before the genre went mainstream. Meanwhile, down at 84 King Street in Soho, an up-and-coming DJ named Larry Levan and club impresario Michael Brody scraped together the resources they needed to open the Paradise Garage.

While the Garage (or “Gay-rage”) is clearly the lesser known of the two, its reputation has only grown among dance-music obsessives. Three decades after it closed and 26 years after Levan’s untimely death, legions of spinners still try to emulate the club’s legendary sets and communal energy. To many, the Paradise Garage has become a quasi-mythological symbol of club culture’s best aspects. In anticipation of the Paradise Garage Reunion at Elsewhere on September 2, we spoke with a handful of Garage regulars about the place behind the legend.

Francois Kevorkian, DJ: I came to one of the construction parties before the club fully existed. They were doing parties in order to raise capital so they could keep building the club. It was so sweaty, no air conditioning, in the middle of the summer of 1977. I'd never seen something like it before. The crowd's energy was so obviously above and beyond anything I had ever experienced. I was speechless.

Bernard Fowler, vocalist for Garage-adjacent band the Peech Boys: The line would be damn near around the block. Sometimes people would be on line for hours waiting to get in.

Kat Ayala, dancer: You had to have a membership. Nobody could just walk into the club and pay a fee. They had to know somebody in order to get in.

FK: It was a private club, so they'd only take members that they felt would fit what the party was about. There was always a lot of drama with people wanting to become a member and the interviews and all that stuff. I was exempt from all of that because I belonged to "For The Record," the same DJ record pool Larry was also a member of.

Joey Llanos, head of security: Guests would pay 15 dollars, and a member would pay eight dollars. The member was allowed to bring four guests on Saturdays, and only one female, because it was a gay party.

KA: You got this big old ramp, right? Just like a parking garage. That was the entrance. All you'd hear is that bass coming in, and it was so exciting, like, "Oh shit, what's behind those doors?"

JL: It was nothing like Studio 54 at all. It was kind of an industrial space. It wasn't very glamorous. The walls were black. As soon as you came up the ramp there was a changing room to the right and coat check to the left. Straight ahead there was a huge lounge where we had boxes that were covered with grey carpet so it was really comfortable. There would be little groups of people sitting around doing whatever they did.

FK: There was an integration of all different types of entertainment at the venue. There was a movie theater in back. While the party was going on they were showing a movie. If you felt like you didn't want to deal with the music, the whole back area was for socializing. There was also another whole enormous area by the coat check.

JL: We'd get first-run movies, just like in the theaters. We had a different movie each week. The roof, you'd go up there, and we'd have plants, because Michael Brody owned a house in the Pines on Fire Island. So he designed the roof as if you were in the Pines on Fire Island, with all the decking. There was a florist on staff, and we'd always have birds. Michael would pay for beautiful art pieces to be displayed. It wasn't a glamorous club like Studio 54 was. It was just very comfortable. People would come there when the club opened at midnight and not leave until we closed, and sometimes we didn't close until 10 or 11am the next day.

Willie Dancer, dancer: You went there to dance, and we didn't dance like the regular people who were dancing in discos. I used to get dressed up to go to a disco, I'd do the Hustle for a couple hours till 4 o'clock in the morning, then I'd say, "Oh shit, lemme go to the Garage." I had my bag with me and go to the Garage and change into my sweatpants and my sneakers.

KA: Nobody dressed [up] to go out dancing. We would go in shorts, T-shirts, sneakers.

WD: During that time disco people used to wear shiny shoes, all dolled up with all kinds of cologne. People at the Garage went there to dance. It was like an audition for a Broadway play, because everybody had a fucking bag walking into the Garage because they were going to change into their dance gear.

JL: A lot of money and thought was put into the room. The dance floor was designed to be danced on, with cushioning and springs, as if you were dancing in a dance studio. A concrete dance floor is too hard on the knees.

FK: In 1978, most clubs out there had a decent sound system. At the Garage, it was like stepping into a temple of music. The bass drum and voices were so crisp, clear, well-defined and powerful. It would change you forever.

BF: Larry was an interesting cat. He wasn't just into playing the records. Larry loved sound. Larry was very hands on, equipment wise. When the party was going on it wasn't unusual for Larry to go get a ladder and go and tweak the speaker.

JL: If he didn't like the way the room sounded, we'd be out there moving the speakers an inch on one side, an inch on the other. Sometimes he'd come out of the booth in the middle of the night and stop the music and bring out a ladder to clean off the mirror ball because it was dusty. And you just had to wait for him.

FK: They obviously had more speakers than necessary.

KA: Everyone was there to dance, to sweat, to listen to the music, and, to be quite honest with you, to get high. In that era, drugs were a biggie. I'm talking weed to black beauties to acid to coke—you name it. They had drug dealers outside the club areas. It was like a drug store. You'd go and pick up your shit and then you’d go in the club.

BF: The Paradise Garage was like church. People who came from all over the tristate area and beyond to spend the weekend at the Garage. That was the congregation, and Larry was the minister. He was preaching through his records. You always knew what type of mood Larry was in depending on what he played. If he was pissed at somebody he'd send them a message through whatever it was he was playing. And if he was feeling good, people knew he was feeling good. He was the Pied Piper. Nobody did it better. [Editor’s note: for a taste, check out Larry Levan’s Classic West End Remixes]

FK: At the time, there was definitely a cult of personality about Larry Levan himself. He seemed to have godlike powers of speaking to people through the records he played, using the records to say something. And everybody was hearing it loud and clear.

BF: I think he was just in tune with his audience. Larry played a lot of stuff that people might have been familiar with in the dance world, but it wasn't unusual for him to play the Who or the Stones. Larry made it all make sense.

JL: He would play a record that would totally clear the dance floor. Like that Taana Gardner record, "Heartbeat." The first time he put that record on the whole dance floor just stopped and walked off the floor. He played the record six more times, back to back. Literally the record would finish and he'd pick up the needle and put it back on and play it again. The next day people were lined up outside Vinyl Mania Records on Carmine Street trying to buy it.

BF: There would be nights where Larry would be up there spinning and he would work the crowd into such a frenzy they would start screaming, looking up at him and screaming his name. I'd never seen anything like that before.

FK: I'm not entirely sure that all of it can be explained, to be honest.

JL: When you have two, three thousand people, body to body, dancing in one room, it generates a lot of heat. Like hot-yoga type of heat. When it got really hot in there the turntable belts used to melt and fall off and the music would go [turntable slowing down sound].

FK: It was his place. We were just his guests.

KA: What I really liked at the Garage was the live entertainment. Back then they would feature the artists that would sing these big records that we were so used to. So I got to see Prince live back in the early '80s. Madonna was there. We weren't too happy with Madonna at the time, but she was there; she did her little thing. And look at her now. 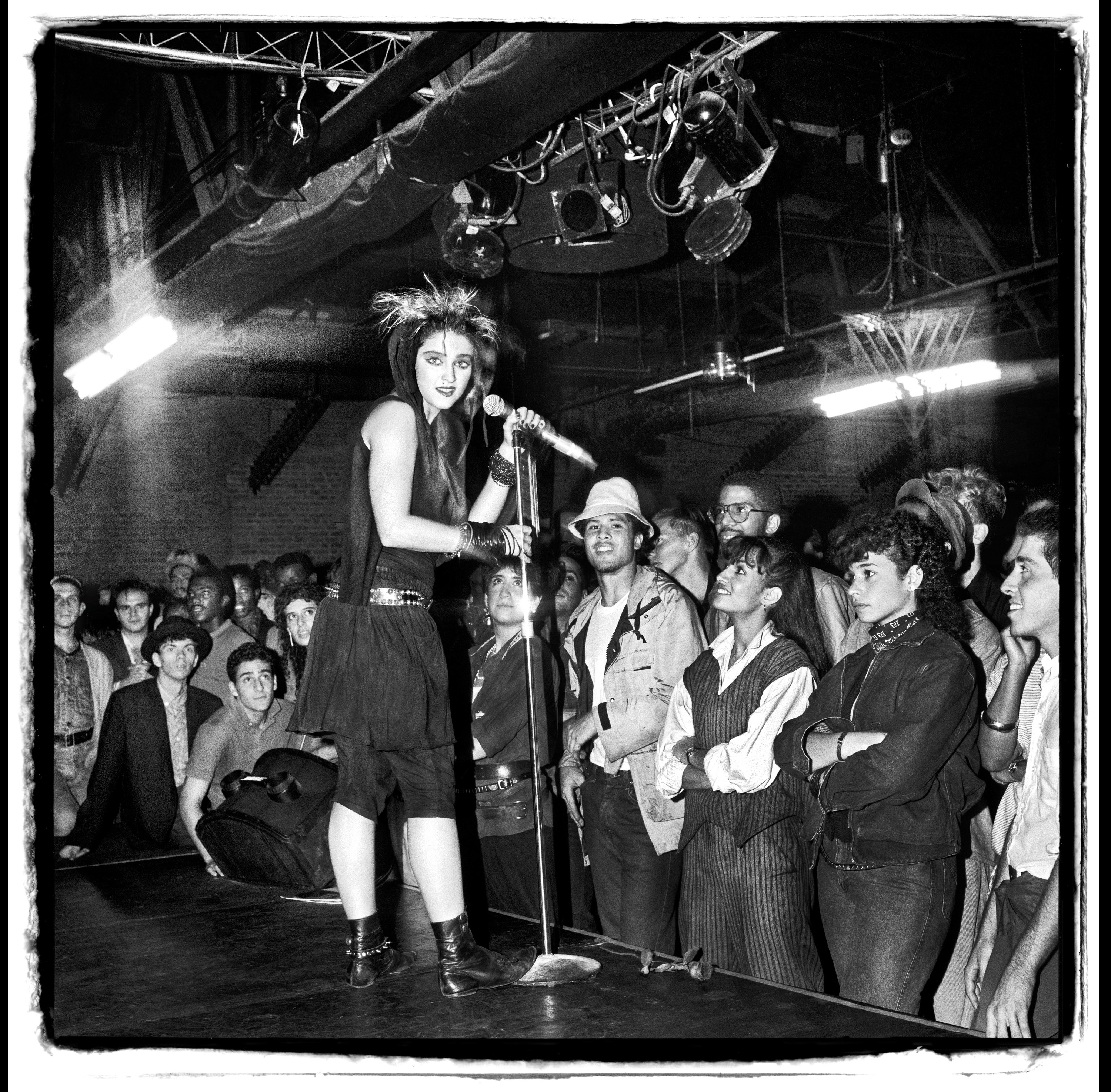 FK: Once you paid to get in, you didn't have to pay for anything else. All the food, all the drinks, all whatever you wanted, without ever having to make a transaction. It wasn't by accident. It was by design.

JL: There was an ebb and flow, and when people came off the dance floor, they'd come out and get their drink and sit down and hang out in this huge lounge. We'd cut up apples and oranges and put out peaches and plums in these big bowls. And we had these huge juice bowls.

KA: People would throw things in the punch. You know, acid and stuff. If you had punch or water there, odds were it was spiked.

WD: I went to Studio 54, and to me the only good thing was the sound system. It was all celebrities there, snobs, people with money. The Garage was a whole different atmosphere.

FK: It was really a social experiment. No one else was willing to have people coexist peacefully together. Even though the Disco Demolition [Night] record burners were trying to make disco into a shitty meme, the Garage was like an experiment into the future in a sociological sense.

Paradise Garage may have bitten the dust, but New York still boasts plenty of awesome clubs in NYC, LGBT parties and much more.