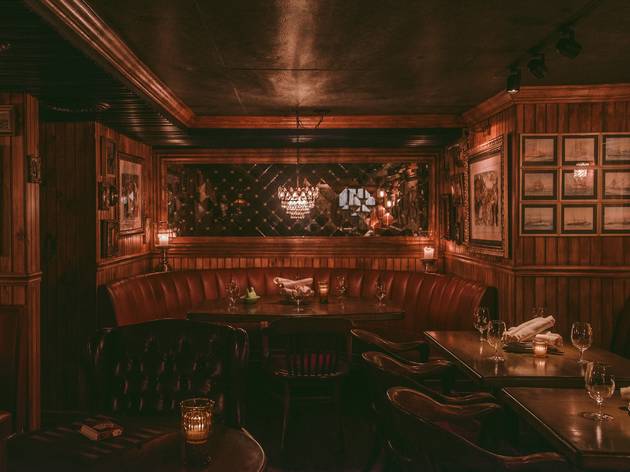 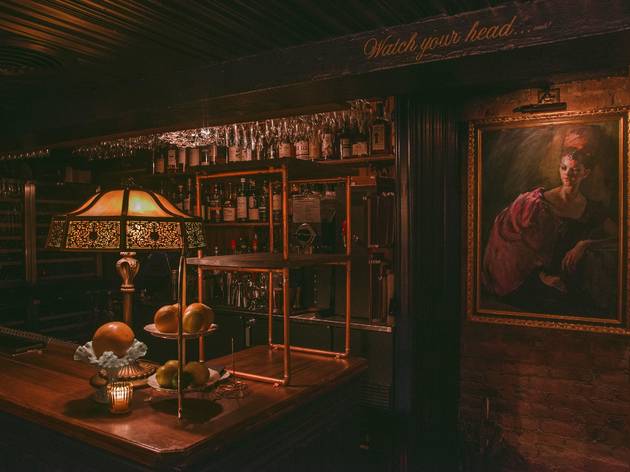 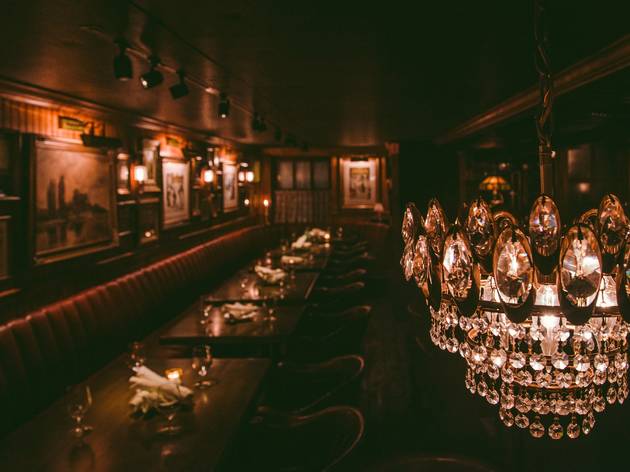 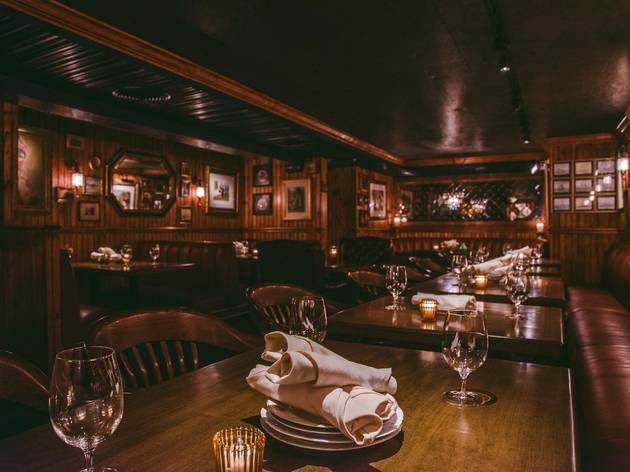 It begins, as most meals don’t, with the snap of a surgical glove: The navy-suited server slips on the rubbery mitt before theatrically yanking out the steak knife that juts from a double-patty burger, like a chophouse Arthur pulling the sword from the stone. The burger is sliced, and slowly but deliberately its beefy halves are rotated for the customer’s view, less for inspection than exhibition.

It’s an awful lot of brouhaha for humble ground beef, but this is a burger with a mighty reputation. The American Cheeseburger ($18.95) at 4 Charles Prime Rib—the low-ceilinged steakhouse speakeasy from Chicago restaurateur Brendan Sodikoff, located inside a Charles Street town house—is a near replica of the widely acclaimed burger at Au Cheval, Sodikoff’s Windy City diner concept. And it’s a good one, especially considering the griddle-smashed patties are crowned not with ritzy toppers like foie gras and gold leaf but with no-frills additions like onions, pickles and plastic-wrap American cheese. (Optional toppings of a fried egg or truly spectacular slabs of maple-glazed bacon are also available for $2.50 and $3.95, respectively.)

That burger is not, however, worth the fuss of getting into 4 Charles, nor is much else on the menu, really. (Okay, maybe the bacon, but only just maybe.) The wood-paneled, cognac-hued dining room—all clubby booths and jazz standards—boasts only 10 tables, which makes scoring a reservation a blood-boiling venture. A meal here is most likely to take place at 11pm, a time more suited to the light tapas tastings of the Spanish rather than REM-cycle–ruining plates of creamed spinach ($12.95) and rémoulade-sauced crab cakes ($25).

The menu takes the token indulgences of the American steakhouse to gluttonous new heights. That thick-cut bacon makes many cameos: cubed and tossed with charred brussels sprouts ($12.95), tucked inside a cheddar-gorged baked potato ($12.95) and dotting the gloopy depths of the cacio pepe carbonara, which tastes like neither of its influences ($23.95).

Those indulgences extend to the prices. A dull Dover sole goes for $85.95, and $75 only gets you as far as a starter of Alaskan king crab. The namesake prime rib is comparatively a steal, available in three iterations—a thin-sliced English cut ($39.95), a 16-ounce Chicago cut ($65.95) and a bone-in double cut ($85.95)—but for all its 12-hour roasting, it lacks any lusty melt or mineral tang. The burger’s good any way you slice it, but the prime rib doesn’t make the cut.