“Frenchette is impossible,” I texted a friend months after McNally Land alums Lee Hanson and Riad Nasr’s juggernaut opened in Tribeca. “Nothing is impossible,” he texted back. I was right and we ended up someplace else on that occasion, living to visit the talented duo’s polished, popular brasserie and handle its confounding knives (their design appears somewhat counterintuitively upside-down to fingertip-threatening effect) at other times."

Le Rock, the pair’s new, also mostly French effort, opened this July with Walker Stern (Battersby, Dover) as executive chef. The jury’s still out on the insular midtown village’s greater worthiness as a truly local locale, but Le Rock has a more reasonable claim as its marquee than any other legacy or newcomer. (Though it’d be neat if Rainbow Room became a regular restaurant again!) What the expense account spot does right it does very right, and what it does wrong is middling enough to more or less overlook.

The former Brasserie Ruhlmann space, which I remember being a little too dark and a bit stout in spite of its sprawl, is now lovely—beautifully-lit and airy under high ceilings and Art Deco design elements. As Le Rock, the address has emerged, as if from marble, as what it’s clearly always wanted to be.

A revolving door spins into a glamorous but weirdly small bar area that still somehow takes up a lot of space. It’s anchored by illuminated panels fixed with bottle shelves that wish to reflect vintage dress. It’s pretty, but the configuration feels more like a waiting area, a place to pass through rather than a drinking destination onto itself. There’s room for 30, seemingly evenly split between the boxy bar and a few high-tops. The spendy trio of martinis ($26 with sidecar), including the nicely dry Super Sec with overproof gin and vermouth, and classic Manhattans ($18) are good; this just doesn’t seem to be the place, in spite of its aesthetic appeal, to linger over them separate from dinner arrangements.

Most of the 130 seats in the larger dining room to the left are tightly stacked, recalling that pre-2020, pre-partition, pack ‘em in agreement Manhattan made some time ago that now, as then, will skew jovial or crowded, depending on your mood. There are also a few, more secluded tables on the periphery that, similarly, track as blessedly-spaced or annexed, also according to temperament. Mine lands on the former, and Le Rock’s best bet for that breathing room is in the back toward the left.

Before entrées, the dinner menu’s arranged in shellfish, appetizer and amuse sections, the latter more commonly preceded by “bouche” and signaling a purportedly complimentary (everything costs at the end of the day!) little bite that, here, are more like baby-apps ranging from $6 to $15 with a $45 caviar outlier. That category’s chicken liver mousse ($6) is an adept introduction to the kitchen, smooth and rich under gelée and an excellent spread for the great house baguette (included). Its grilled calamari and shishito brochette is a nosedive better avoided. Five pieces of the grilled squid encase bits of the famously finicky pepper on each $8 skewer. It isn’t bad because it doesn’t taste like anything other than the occasional lick of char or, if you get an active one, naked heat, but most bits are, predictably, untouched by capsaicin. The escargot ($25) is a more vibrant choice, dressed as expected in garlicky green and served in five petite cups under a crouton crown for each that makes flipping them out of their artificial shells easy and elegant. They’re also an ideal vehicle for the rest of the bread.

Now, this would all amount to a pretty good restaurant so far, truncated bar notwithstanding. But Le Rock’s best plates are high enough above what most of its contemporaries are cooking to catapult it to the realm of very good.

The agnoletti with corn and chanterelles ($24) sends pillowy pasta into a higher stratosphere of the form: a happy marriage of sturdy and dainty. If this is what pasta can be in NYC, it will be vexing to settle for less. Le Rock’s bison au poivre with terrific French fries ($60) is also imbued with buttery flavor and velvety texture. Both dishes approach that often overreaching cliché, “melts in your mouth” much more accurately than anything it’s ever tried to describe.

Le Rock’s sensational bison is tied with its own menu companion for the best meat I’ve eaten this year. The other is an incredible duck ($48), fragrantly spiced and prepared to that perfect deep pink they’d aim for in “waterfowl: it’s what’s for dinner,” commercials, if those existed. This one, too, is a masterclass of tenderness, deep and dynamic with its own juices and expert seasoning to amplify its natural savory sweetness.

I’m a fairly confirmed restaurant dessert denier. Outside of great diners or dedicated shops, they typically disappoint. But pastry chefs Michelle Palazzo and Mariah Neston's excel, including some real showpieces that actually deliver on their appearance. The profiterole’s ($16) a stunner, as is the assortment of sweets (better be at sixty-four freaking dollars), but all night, everybody’s eyes are on the baba cake ($20) with choice of soaking spirit (including classic rum). La Rock makes it one big bundt sliced to order, doused in booze and topped with a generous crown of fantastic whipped cream that all together gets us ever closer to wide acceptance of the word “moist.” Its presentation is rivaled only by its wonderfully finished product; refined and bracing with the exact amount of sweetness and punch for an adult palate.

Nobody really knows what’s going to happen with Rockefeller Center. A Dimes Square-style destiny seems unlikely. But Le Rock’s mains are better than beloved Frenchette’s and most of its direct competitors. That and surprisingly decent availability at press time might make the micro-neighborhoods new crown jewel the best kept plain-sight secret (though still plenty busy!) across the complex.

The Vibe: Lovely, loftey and spacious, but crowded and cacophonous, with a small bar up front.

The Food: French-adjacent with nice escargots and chicken liver mousse and excellent pasta, bison and duck.

The Drinks: House and classic cocktails with a huge variety of natural wines.

Time Out Tip: Le Rock has a few less crowded tables for two and small groups toward the back.

Le Rock is located at 45 Rockefeller Plaza. It is open Tuesday-Saturday from 5:30pm to 10pm. 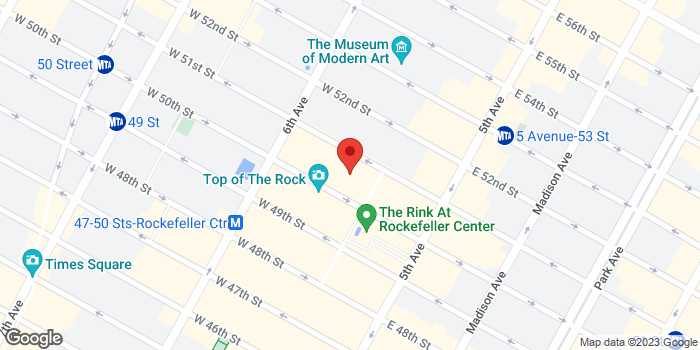