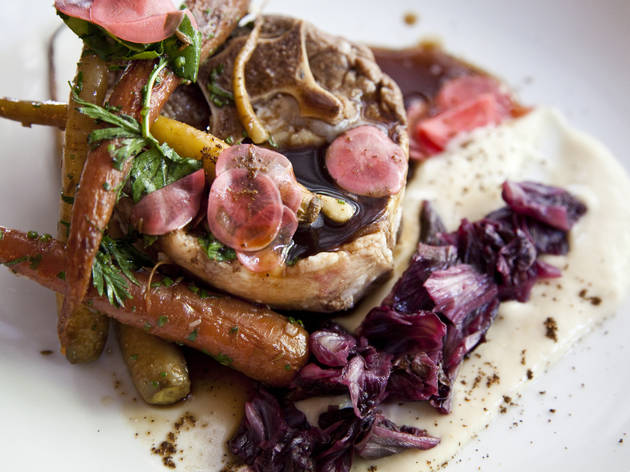 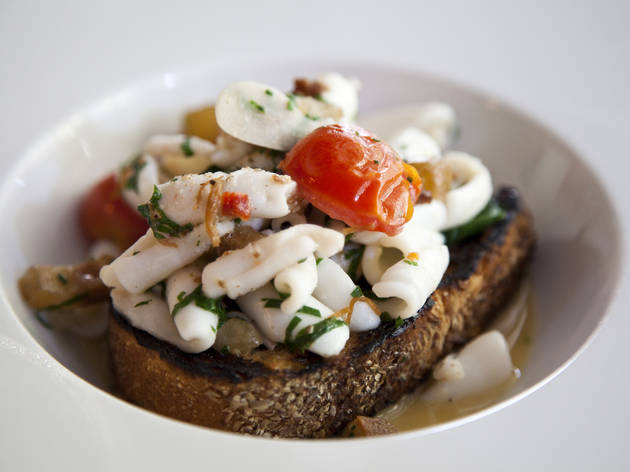 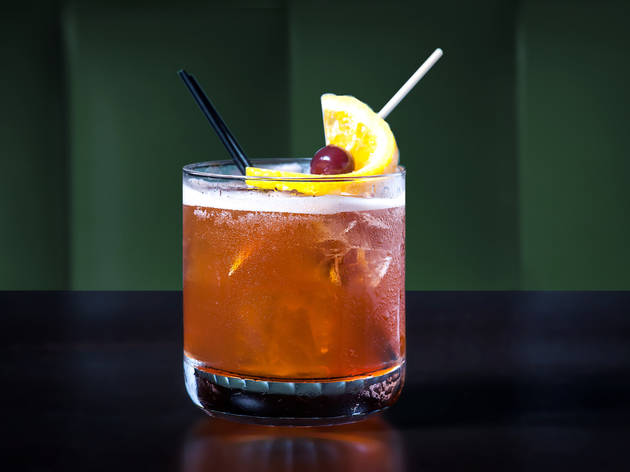 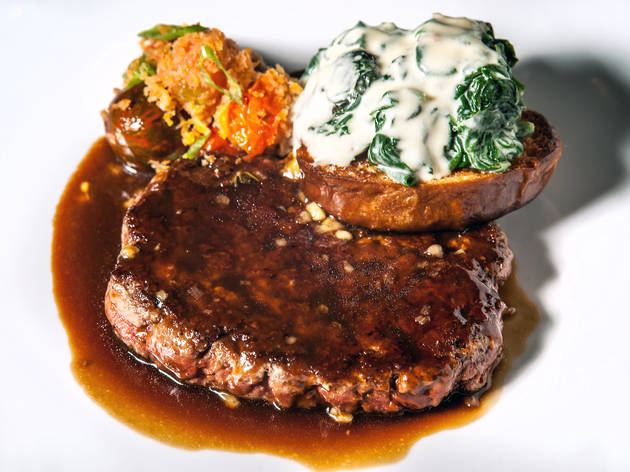 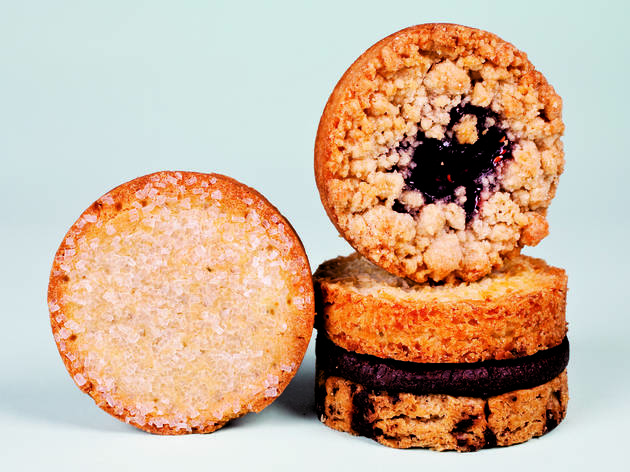 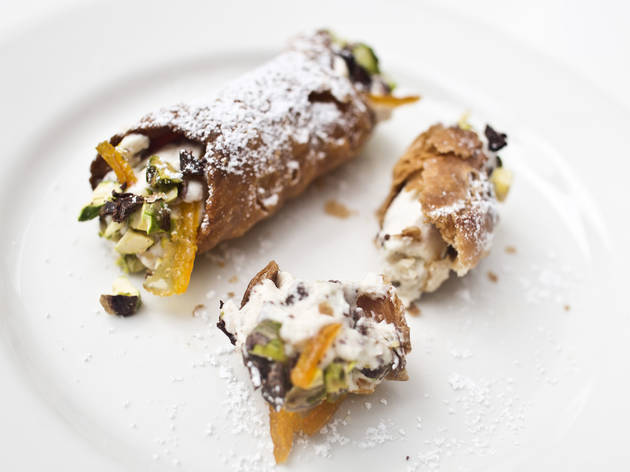 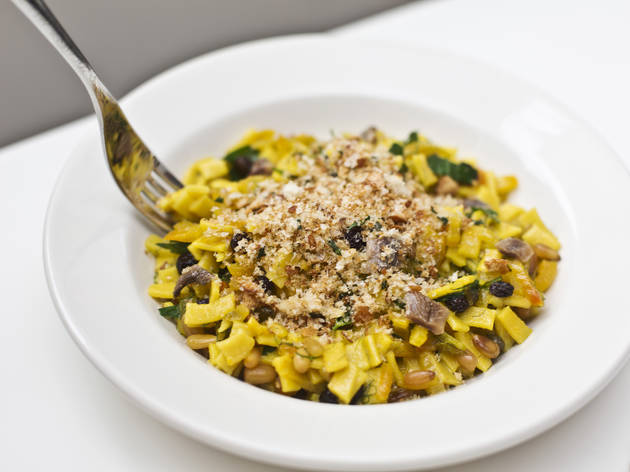 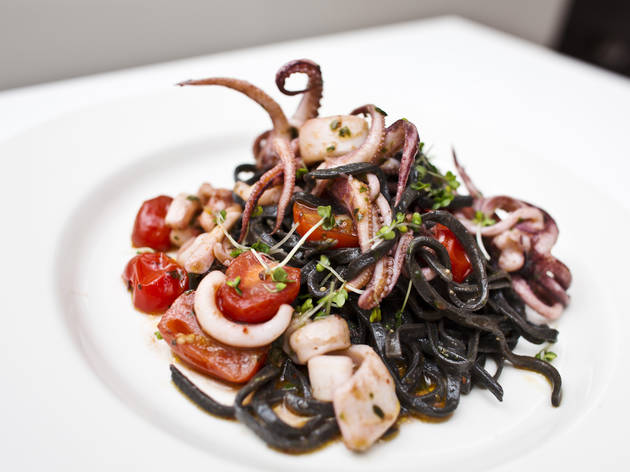 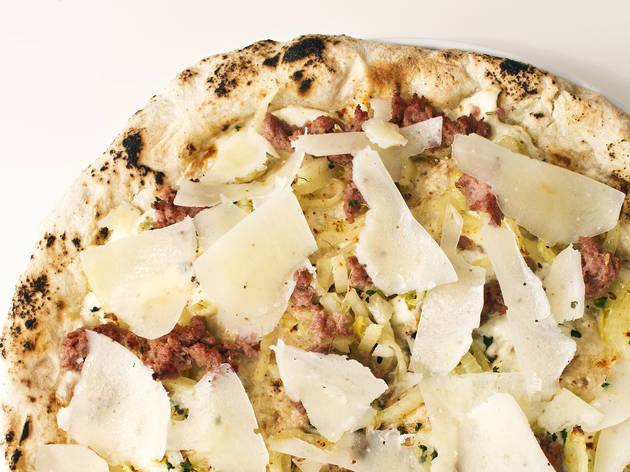 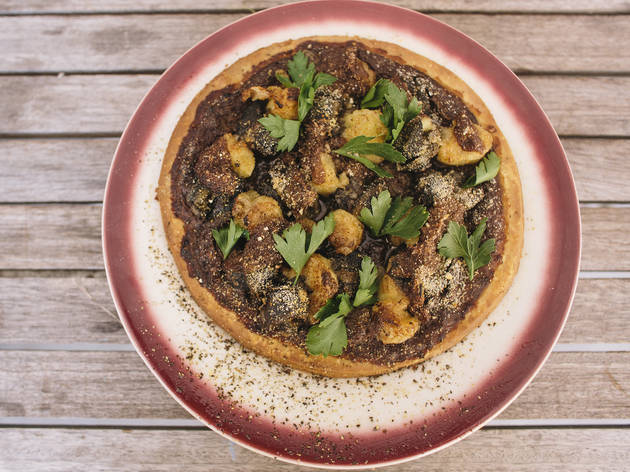 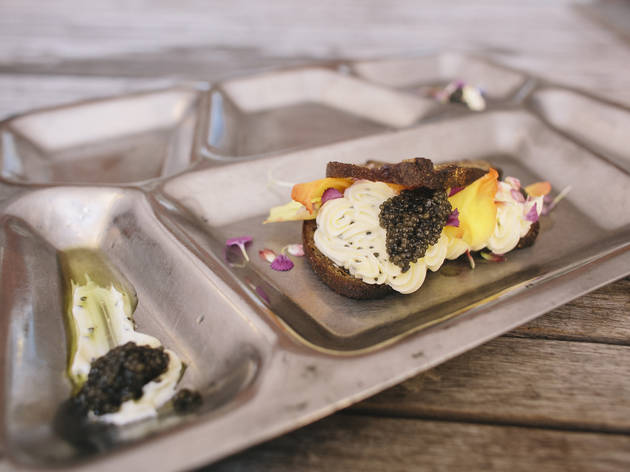 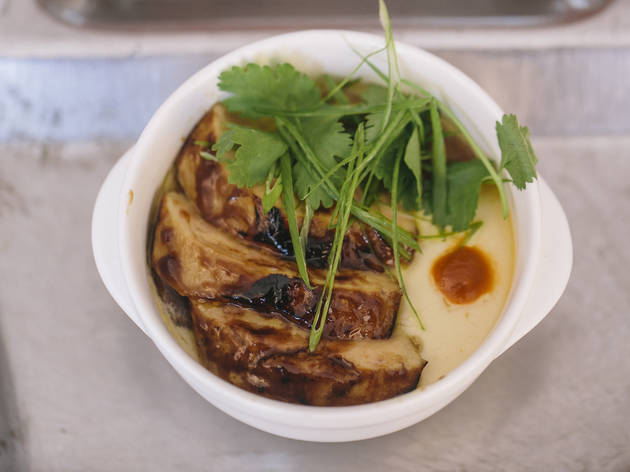 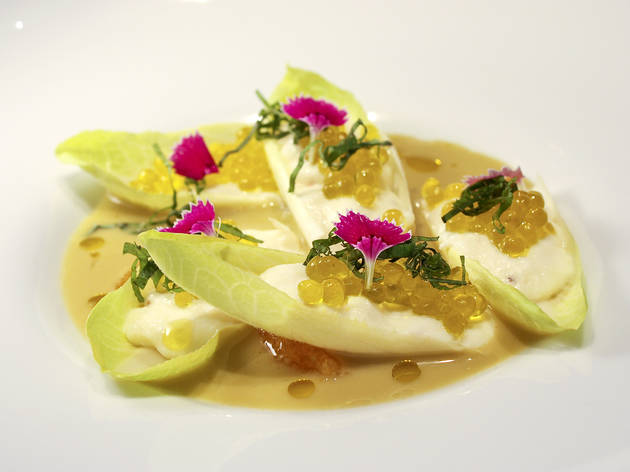 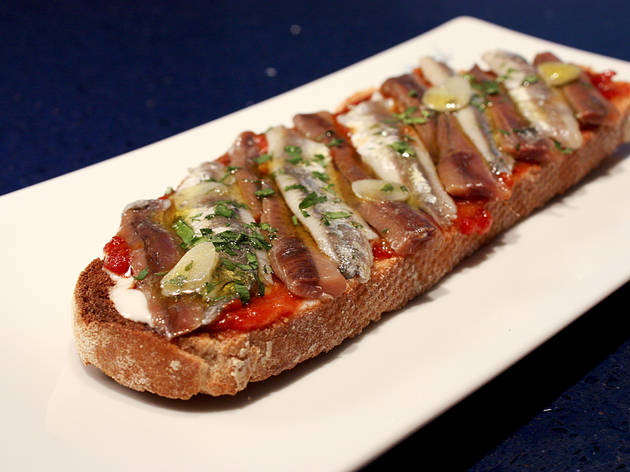 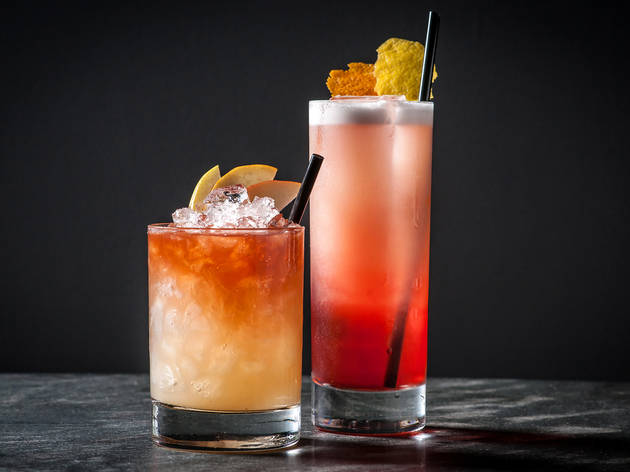 15/24
Photograph: Paul WagtouiczTahona Smash and One Flight Up at Pouring Ribbons 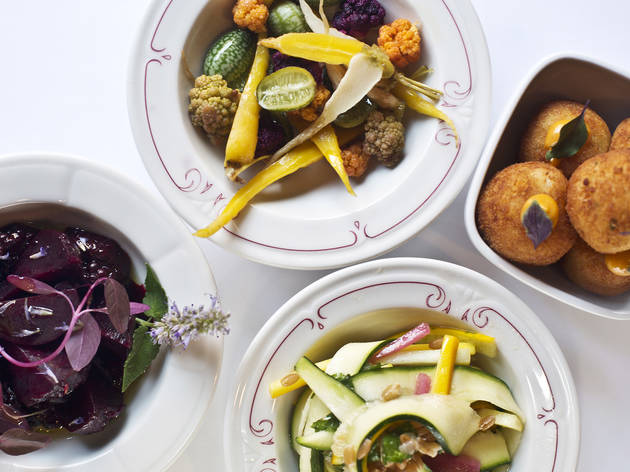 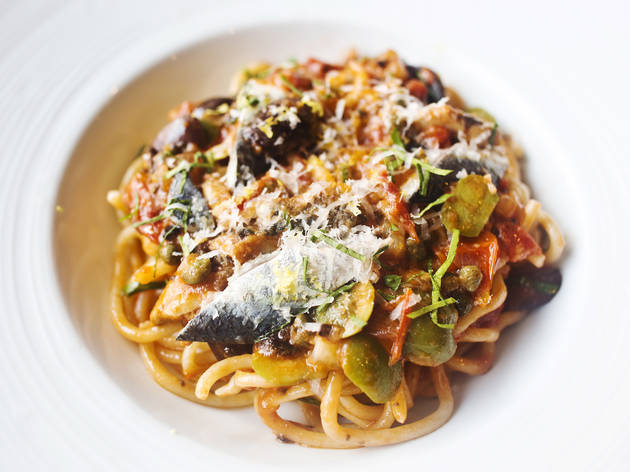 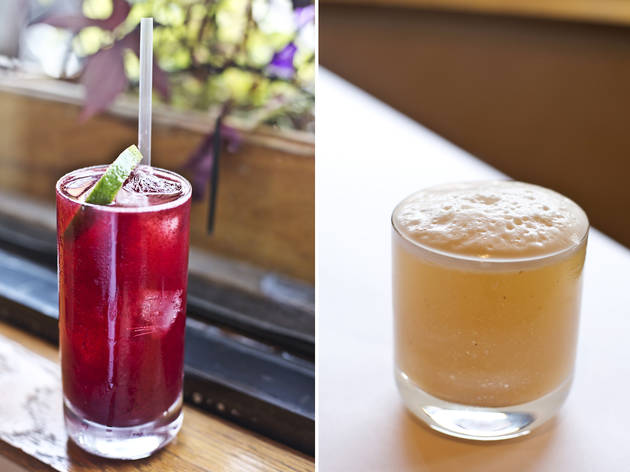 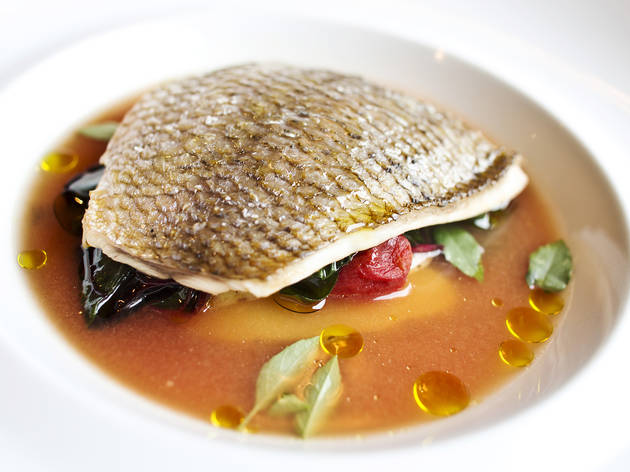 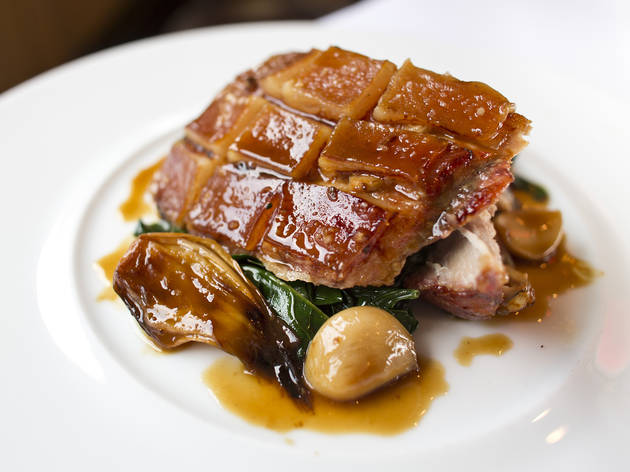 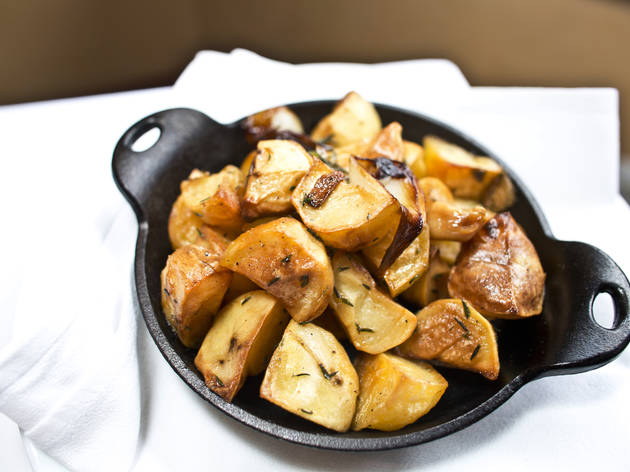 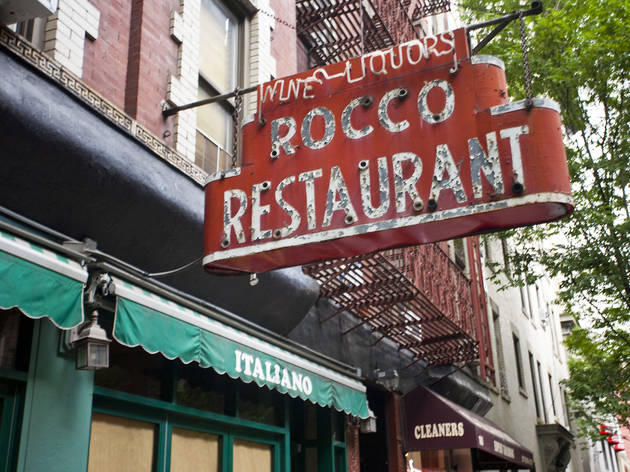 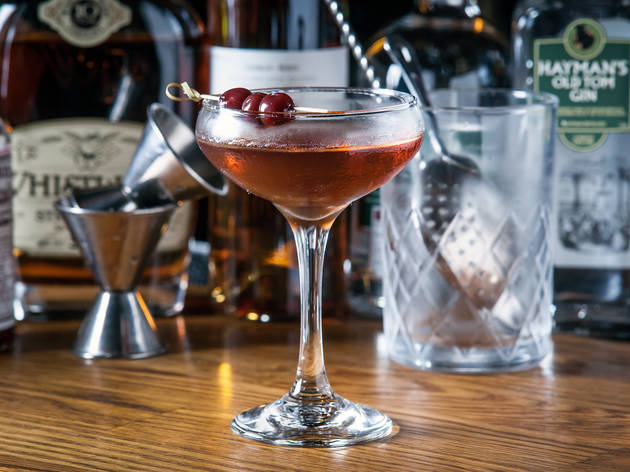 23/24
Photograph: Paul WagtouiczRemember the Maine cocktail at The Library at the Public Theater 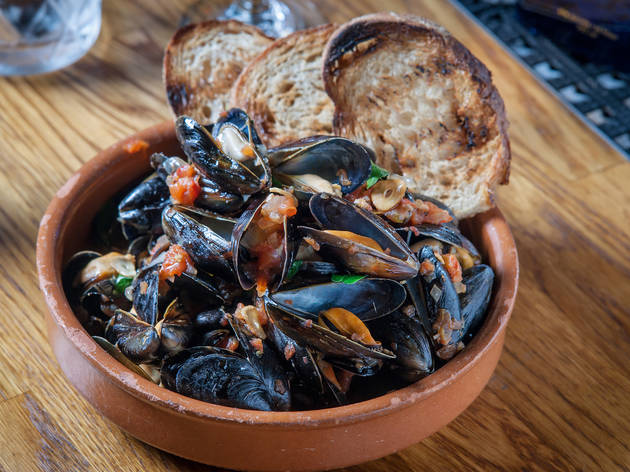 24/24
Photograph: Paul WagtouiczMussels at the Library at the Public Theater
Advertising

Krescendo
Buzzy West Coast imports have been storming New York lately (see Mission Chinese Food, Pok Pok Ny). In September, you can add the new pizzeria from Top Chef Masters contestant Elizabeth Falkner to the list. Brought on to the project by owner and fellow Californian restaurateur Nancy Puglisi (Tony’s Pizza Napoletana), the SF pastry rock star will add wood-fired pizzas (such as a Margherita) and homemade pastas (like one with sardines, wild fennel, pine nuts and raisins) to her repertoire of doughy delights. Of course, there will be desserts, too—traditional treats such as tartufo and tiramisu. Another San Francisco transplant, bar manager Darren Crawford of Bourbon & Branch, will see to Italian-inflected cocktails behind the oak bar. 364 Atlantic Ave between Bond and Hoyt Sts, Boerum Hill, Brooklyn (718-330-0888). Mid-September.

Pouring Ribbons
The hotshot cocktail team behind Alchemy Consulting—Toby Maloney, Jason Cott, Troy Sidle and Death & Company vet Joaquín Simó—have opened trailblazing bars in Chicago (the Violet Hour), Nashville (the Patterson House, the Catbird Seat) and Minneapolis (Bradstreet Craftshouse). But this drinkery will mark their first solo project in New York. The second-floor spot is lit by Art Deco glass shafts and a large arched window spanning the front of the bar. Grab a seat to sample a cocktail menu composed of classic and original tipples, such as the One Flight Up, an egg-white drink made with pisco brandy, blanc vermouth, lemon juice and Campari.  225 Ave B between 13th and 14th Sts (917-656-6788). Mid-September.

The Butterfly
Having celebrated Italy’s fertile Emilia-Romagna region with Osteria Morini and the Boot’s coastal cuisine with Marea, Michael White now casts an eye back toward his native Wisconsin for his latest venture, the Butterfly, named after a Midwestern restaurant where the chef worked as a Beloit youth. The retro supper club will spotlight American-hometown revisions of classics like spaghetti and meatballs and chopped steak. Drinks come from masterly barman Eben Freeman, who plans to offer spins on midcentury tipples like the crème de menthe–based grasshopper and a brandy old-fashioned. His podium: a 21-foot-long bar with a woodcut back wall that resembles the open wings of a butterfly. 225 West Broadway at White St (no phone yet). Late September.

The Library at the Public Theater
In the landmarked building that houses the Public Theater, white-hot chef Andrew Carmellini stages his third, much-anticipated act: a preshow lounge. The Café Boulud alum—whose holdings include the Dutch and Locanda Verde—will offer a menu influenced by New York's dining culture. Pair his dishes—mussels in a garlicky red sauce, seafood gumbo with andouille sausage—with a classic cocktail. Make some time to wander the room: Designed by David Rockwell and modeled after Gotham’s first public library (the building’s original inhabitant), it features an elaborate Parisian rug and industrial steel-frame bookcases along the walls. Also keep your eyes peeled for Carmellini's return to his classical culinary roots when his as-yet–unnamed French-inflected project opens nearby (at 380 Lafayette Street) towards the end of the year. 425 Lafayette St between Astor Pl and E 4th St (212-539-8777). Early October.

Red Gravy
Saul Bolton—the Michelin-starred Brooklyn toque behind Saul, the Vanderbilt and cocktail bar Botanica—sets his sights on Southern Italy with this 75-seat trattoria. Homemade pasta and whole butchered animals will form the foundation of Bolton’s seasonal Italian menu. To drink, find homemade amari, vermouth and limoncello, plus a wine list highlighting small-production bottles from the lower part of the Boot. 151 Atlantic Ave between Clinton and Henry Sts, Brooklyn Heights (no phone yet). Late October.

The Marrow
Season-one Top Chef champ Harold Dieterle—who garnered serious acclaim with his West Village Thai eatery, Kin Shop—will salute his family heritage at this meatcentric Italian and Germanic venture. Feast on braised brisket braciola and ostrich schnitzel in the bright 61-seat dining room, which offers a view of the kitchen. An extensive, 70-plus-bottle wine program will focus on German and Austrian whites and Italian reds. 99 Bank St between Greenwich and Hudson Sts (no phone yet). Mid-November.

Torrisi project (name TBD)
Food-world pied pipers Rich Torrisi and Mario Carbone (Torrisi Italian Specialties, Parm) continue their campaign to reinvigorate stale Italian-American staples at their third venture, which will harken back to the red-sauce restaurants of midcentury New York. Branching out beyond Nolita, they’ve stationed the new eatery in the historic Rocco Restaurant space, a Greenwich Village staple since 1922. 181 Thompson St between Bleecker and W Houston Sts (no phone yet). Mid-November.