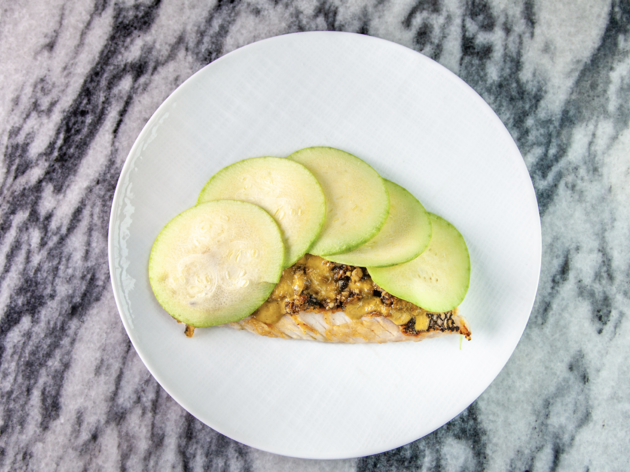 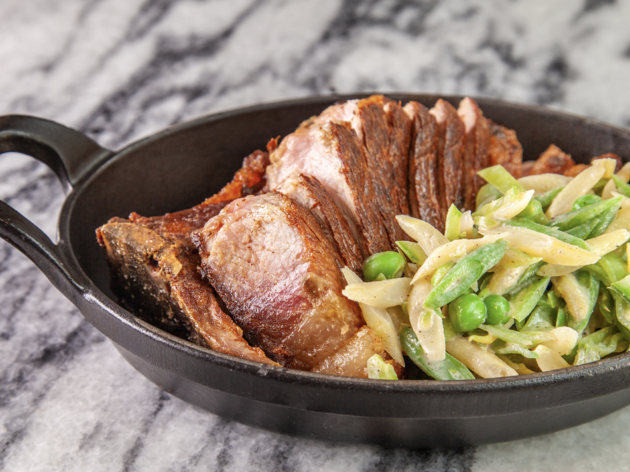 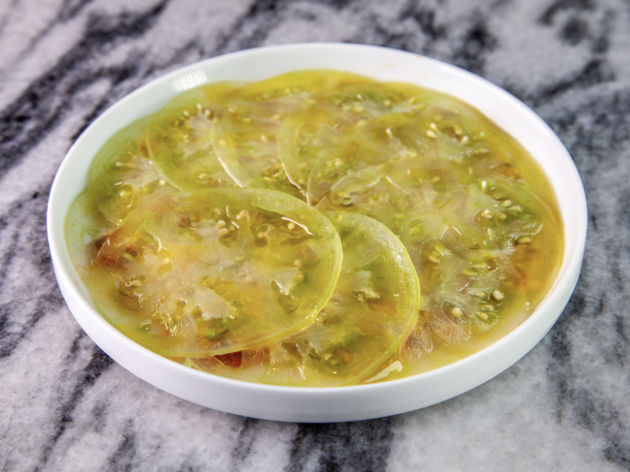 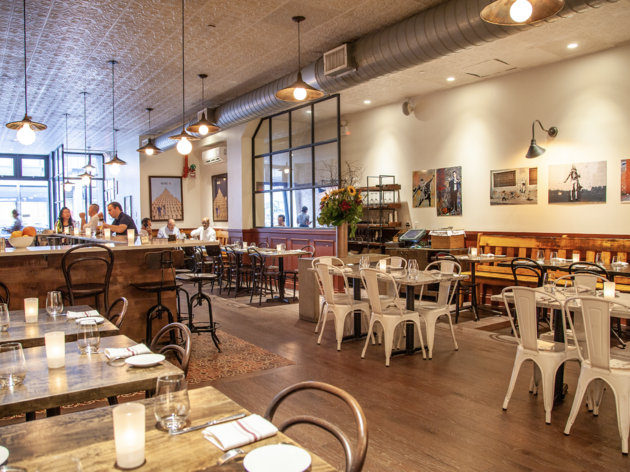 Pass by the impossible-to-get-into Tribeca restaurants, dodge the Lululemon-clad stroller pushers and look for the Dunkin’ Donuts on Chambers Street—Racines NY is right next door. Once you’re seated with a glass of wine in hand, you won’t want to leave anytime soon.

Executive chef Diego Moya’s thinly sliced green beefsteak tomatoes ($16) cover a bed of spicy nduja sausage and Padrón peppers, showing off his meticulous skills, especially with vegetables. But this dish is just a taste of things to come.

Moya, who dons a simple monochromatic T-shirt in the kitchen, often goes unnoticed despite being one of the city’s most talented chefs. He lets his cooking do the talking.

A typical Spanish pairing of jambon and Black Mission figs ($17) conjures memories of his small plates at Casa Mono—until you dig into the more innovative flourishes, like the swoosh of fig-leaf aioli that you dream of slathering on everything. The seared black sea bass ($41) is garnished with slices of avocado squash and studded with pumpkin seeds. As with most dishes on the menu, each ingredient’s flavor shines and doesn’t overshadow the others.

While the bill can creep into the high end, even for Tribeca, you can still enjoy a reasonably priced meal with just the appetizers and a pick from noted sommelier Pascaline Lepeltier and partner Arnaud Tronche’s well-curated wine list.  Or order one of the entrées, such as the dry-aged pork portier ($52), which is big enough for two or more people to share.

For dessert, the coconut sorbet with rhubarb granité ($12) is a perfect bookend to any meal. It refreshes your palate, making you want to start all over again.

The dining room was too warm on one visit, yet my companions and I lingered over our wine to soak up the laid-back atmosphere and admire the artful plates. A bit French and a bit American, Racines exemplifies a new, increasingly popular kind of Parisian bistro: The vibe is  casual, the food is less fussy, and the menu is full of natural  wines.

In a neighborhood that’s filled with trendy but secretly stuffy spots that sport absurd prices, the much-needed Racines —which also has an appealing bar menu (a cod croquette, $5)—makes you feel like you could drop by any night.