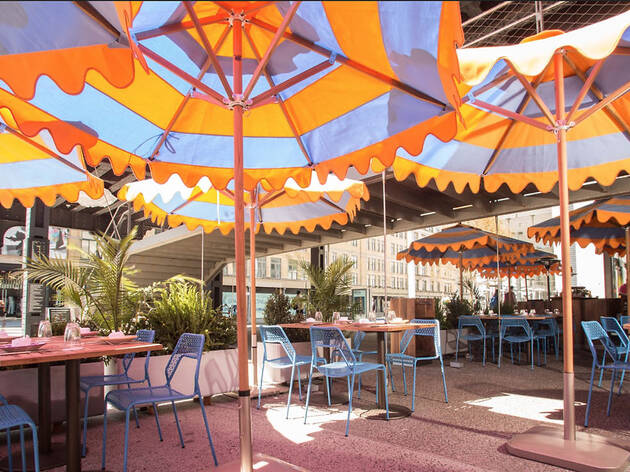 Team Torrisi is coasting with this breezy Italian concept

The adage “Rome wasn’t built in a day” has soothed the worried brows of empire builders for centuries—but not the crew behind Major Food Group. Patience might’ve worked for those Romans, but in its breathless, rapid-fire expansion—eight restaurants in six years—the Italian-American food juggernaut has tapped more readily into Yankee restlessness than Old World restraint.

But Carbone by way of Cuba this isn’t. Compared to that restaurant’s belt-busting, red-sauce gusto, Santina is an altogether lighter affair, its sparse menu dominated by fish and produce. Bread service, a trope of Italian-American eating, is replaced by cecina ($12), thin chickpea crêpes served with a choice of filling—shaved funghi, herb-licked gamberetti—the best and boldest of which is a tuna tartare charged with capers and Calabrian chile.

That buoyant revamping continues across the menu—carpaccio ($9) trades beef for weightless, sunset-orange petals of squash, dotted with pumpkin seeds, honey agrodolce and crème fraîche, and Japanese short-grain rice frequently takes the place of pasta. The guanciale e pepe rice ($17) could be served at a spa—it’s so delicate—but those looking for the salty smack of Italian pork will leave disappointed, overwhelmed instead with cracked black pepper.

The house specialty, the surf-and-turf Chitarra Santina ($17), boasts lovely egg-yolk strands tangled around plump mussels and merguez sausage, but the spare tossing of olive oil and garlic is so minimal, it barely registers. On the opposite end of the spectrum, the bass agrigento ($24) drowns that supple fish in its peperonata-orange ragù.

Santina says
A quintessential New York restaurant, Santina was created by Major Food Group, the team behind some of America’s most celebrated restaurants including Carbone, Sadelle’s, and THE GRILL. Santina has been named one of the Best Restaurants in New York City by The New York Times, GQ, Eater, Bloomberg, Thrillist, and Bon Appétit.

Santina is a coastal Italian oasis where people can eat, drink and celebrate day or night in Riviera style. Santina is housed in a glass box designed by renowned architect Renzo Piano, located under the High Line and next to the Whitney Museum in the heart of the Meatpacking District. This iconic structure is complemented by handcrafted Murano chandeliers from Venice, and outfitted with colorful Solimene plates, vibrant flowers and lush palm trees. The restaurant also features extensive outdoor patio seating set amongst colorful umbrellas, making Santina the perfect summer destination in New York City. From October through April, Santina’s outdoor seating is transformed into an intimate enclosed garden for those looking to escape the winter. With one step in, guests are immediately transported to the sunny Italian seaside, no matter the season.
Share Tweet