Monogamy is so 2015. We spoke to New York couples of a new breed—ethical nonmonogamists—about their love lives.

Try counting the number of times you or someone you know has recently come across the following on Tinder or other dating apps: a profile of a person who identifies as polyamorous or an ethical nonmonogamist. A lot, huh? From the massive, annual cuddle puddle that is Burning Man to OkCupid’s 2014 adoption of the “open relationship” designation, polyamory (roughly defined as intimate relationships involving more than two people, though its circumstances can vary widely) is slowly edging its way into the mainstream. According to this year’s annual survey Singles in America conducted by researchers at the Kinsey Institute, more than one in five people are currently or have been involved in an open relationship. What’s more, a poll of OkCupid users noted an uptick in interest regarding polyamory: In 2010, 42 percent of singles using the service would consider dating someone in an open relationship, while today more than 50 percent would. (Here are some date ideas in NYC, if you’re in the majority.) And our fair city has a budding infrastructure to support the lifestyle: There’s Hacienda Villa, a Bushwick apartment complex that caters to poly tenants, and advocacy group Open Love NY, which sponsors workshops and events including the increasingly popular monthly mixer Poly Cocktails. “On any particular night, we can draw upward of 500 people,” says Mischa Lin, VP and communications director of Open Love NY. “Cocktails go until midnight, but I usually peace out at 8:30pm because it gets so crowded!” And though poly culture is now more visible than ever, the different incarnations and iterations are as diverse as the city itself.

This pair brings a whole new edge to the meet-cute: Nicollette Barsamian’s friends left her in Jon Headlee’s arms outside of the party Dungeon X on Delancey Street, with a cagey, “You’re safe, right?” The two spent the night playing in the dungeon together until Barsamian choked a third person a bit too hard for their taste. (“She kind of has She-Hulk–like strength,” says Headlee.) Headlee, who is straight, has been experimenting with open relationships since he found the fetish communities of Richmond at age 21, and Barsamian, who is bisexual, has only been poly since she got involved with BDSM (and Headlee) last March. While Headlee still seeks emotional (not physical) connections with others, Barsamian considers herself “polyfuckorous”—that is, she has sex, but not emotional interactions, outside of her relationship with Headlee. And as far as managing judgment from peers, both are unconcerned and happy about how exciting their lives are in comparison to their contemporaries. “My first girlfriend ended up just marrying a cop and having kids,” says Headlee. “There’s an article about me in Hustler.”

When these now-married guys first hit it off doing community theater in rural North Carolina, they didn’t have a lot of role models for open relationships. Nevertheless, when Logan Ford moved two hours away for undergrad, both parties knew they would need to embrace certain “freedoms” if the fledgling relationship were to survive. This was 10 years ago—four years before they moved to New York to pursue acting and seven years before they got married—when Robert Reynolds was the only boyfriend Ford had ever had. “When we first opened our relationship, there were tons of rules: never with these guys, not in these situations, blah, blah,” says Ford. (Both also made a list of off-limits former roommates and ex-boyfriends.) “It was strict, but rules or not, we got to have sex with other people,” says Reynolds. Ford adds, “Now, it’s like, ‘Let’s trust one another’s good judgment.’ ” Both agree that they’ve blossomed in New York, not only as a couple but as a one that doesn’t mind other people knowing about their poly arrangement. “Eighty percent of the people we know are single or in an open relationship,” says Reynolds. “It’s just become so normal. At some point during our wedding reception, we said, ‘Let’s count all the guys at our wedding we’ve fucked around with. Oh, look, there’s a friend who had me in a sling recently, [now] having a conversation with my mom!’”

“I don’t care if you have anal sex with her, but a picnic just seems too intimate!” That’s Carol, who describes herself as heteroflexible, talking to her partner, David. (We’ve changed the pair’s names to ensure their anonymity.) Intimacy boundaries were one of the difficulties (or in Carol’s parlance, “wonkies”) from their early days together. The couple met more than two years ago through a mutual poly friend who David had dated. After his divorce in 2010, David dated some women who already had primary partners, but neither he nor Carol had experienced a committed poly relationship until they found each other. While this open framework has provided them with what they say is the most honest relationship they’ve ever had, they also agree it’s taken time to, in David’s words, “re-engineer what we already know about committed, long-term relationships.” There have been moments of jealousy, of course, and both remember the first time they prepared for dates simultaneously. “It was like, ‘Intellectually, I know this is fine,’ but on the lizard-brain level, it wasn’t as easy,” admits Carol. Now they’ve reached a comfortable equilibrium, with a West Village apartment and a boat docked near Jersey City, which either party can use for dates. “Last weekend, I had an overnight with someone else, but I still couldn’t wait to come home to David,” says Carol. “In a way, poly gives us even more of a chance to miss each other.”

Looking for some poly date ideas? 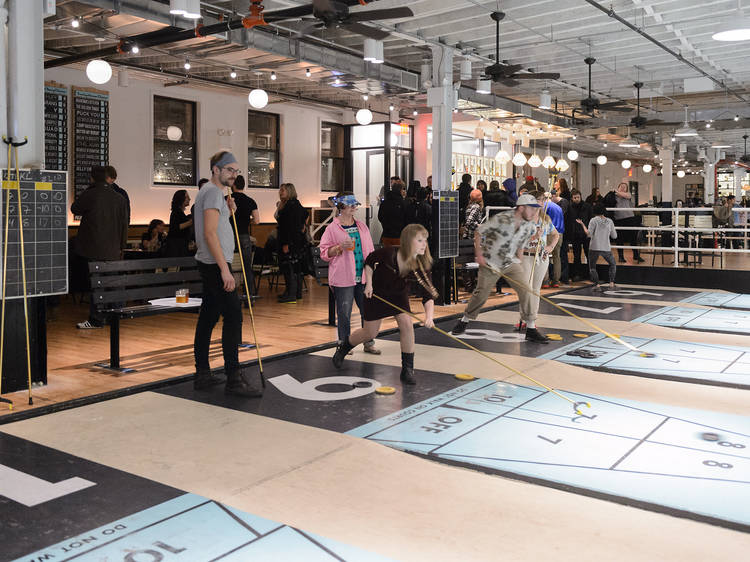 With these double date ideas for a night out in NYC, two is better than one and four is fun to the core