The New York International Fringe Festival is back for its 19th annual edition, and once again, we face the challenge of sorting through the shows. Confronted with nearly 200 productions crammed into 16 Off-Off Broadway venues in 17 days, how can we decide what to see? Happily, as always, we have a great big stack of the Fringe’s traditional promotional postcards to help us. We’ve sifted through a batch of them and identified seven kinds of shows to look out for in this year’s festival. With any luck, one of them will suit your Fringe fancy. 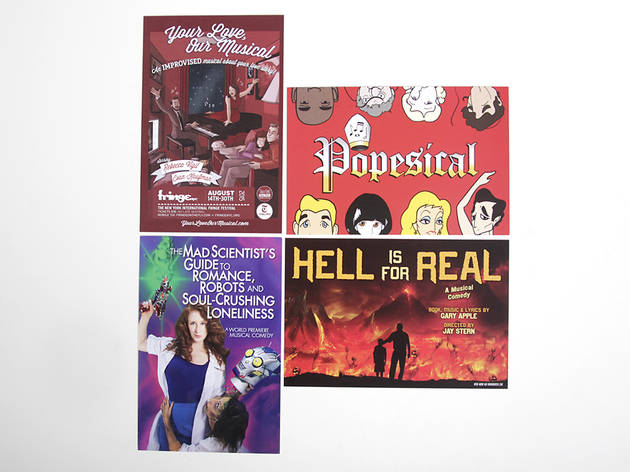 Offbeat tuners are a staple of the Fringe every year, and 2015 is certainly no exception. In The Mad Scientist's Guide to Romance, Robots and Soul-Crushing Loneliness, a scientist builds a robot boyfriend. In Popesical, cardinals are locked in the Sistene Chapel to compete in secret challenges to succeed a dead pontiff. In Hell Is For Real, a six-year-old boy is mistakenly given Charles Manson’s place in the underworld. And in Your Love, Our Musical!, two improv comics create a whole new musical on the spot after interviewing a couple from the audience. 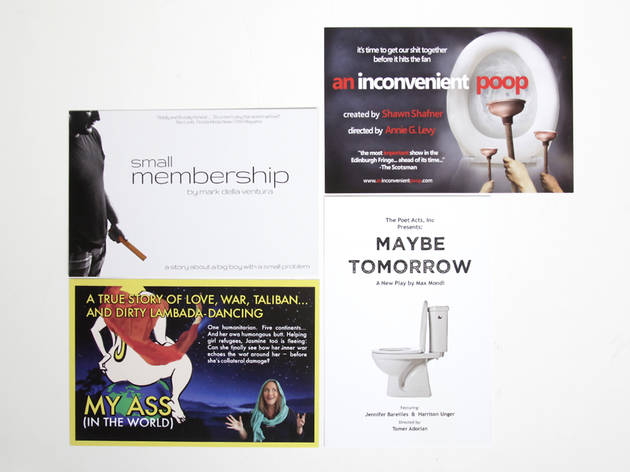 It wouldn’t be the Fringe without a few productions that proudly aim below the belt. This year, two shows’ postcards feature toilets right up front: Maybe Tomorrow, in which a woman refuses to get up from the commode, and An Inconvenient Poop, which takes on the wastefulness of flushing. Small Membership is about a guy with a tiny penis, and My Ass (in the World) is about a gal with a huge butt; if these two solo shows were playing at the same venue, we would be rooting hard for a meet-cute mismatch. 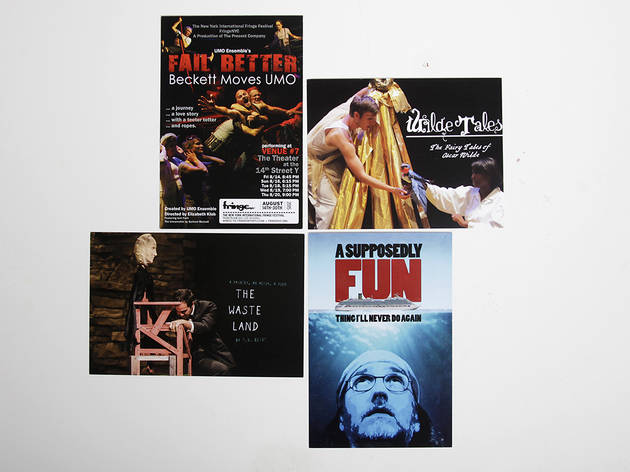 It can’t all be toilets and butts, of course. Classing up the joint are a number of Fringe shows based on work by renowned dead litterateurs. Fairy tales by Oscar Wilde get a puppet-show treatment in Wilde Tales; a puppet is also prominently featured in The Waste Land, based on T.S. Eliot’s poem. UMO Ensemble’s Fail Better uses neocircus movement to explore snippets of text by Samuel Beckett. And Christopher Duva’s A Supposedly Fun Thing I’ll Never Do Again sails through David Foster Wallace’s hilarious takedown of cruise ships. 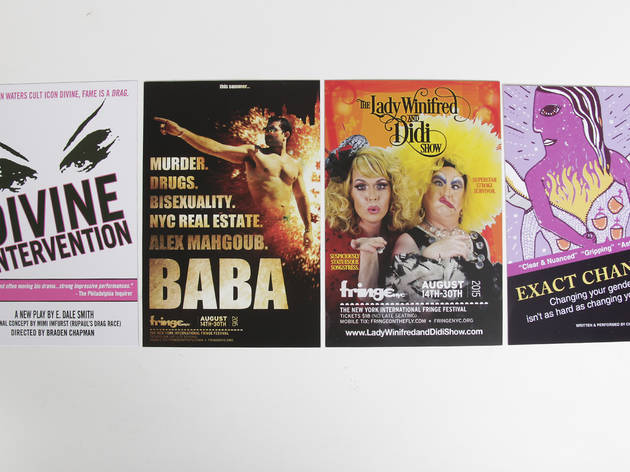 You can’t spell Fringe without LGBT! Okay, technically you can, but queer-themed productions are a core segment of the festival’s programming. The highest-profile example in 2015 is Divine/Intervention, a portrait of John Waters’s barrier-breaking muse. Good taste is not on the menu at The Lady Winifred & Didi Show, a campy drag comedy show. Bisexual writer-performer Alex Mahgoub bravely keeps the shirtless-guy postcard tradition alive for Baba, his coming-of-age memoir. And Christine Howey, a poet and theater critic, performs in a solo show, Exact Change, that explores her transgender evolution. 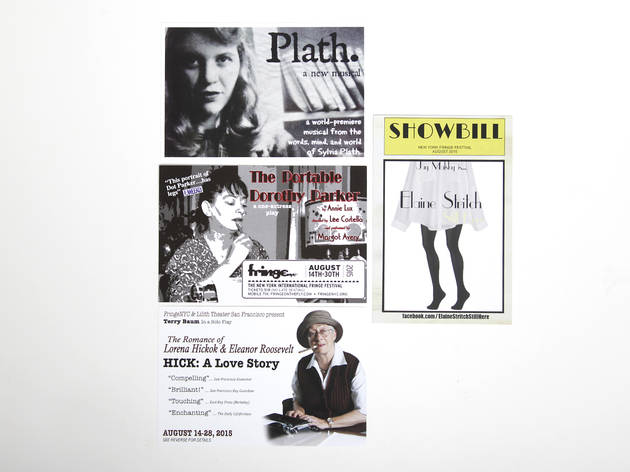 Famous women from the past are popping back to life all over this year’s festival. Elaine Stritch Still Here finds the legendary Broadway battle-ax, who died last year, reincarnated by Jay Malsky in drag. Solo performer Terry Baum explores the romance between Eleanor Roosevelt and Lorena Hickok in Hick: A Love Story. And fans of 20th-century poetry can choose between the musical Plath. (the period is part of the name!) and Annie Lux’s The Portable Dorothy Parker. 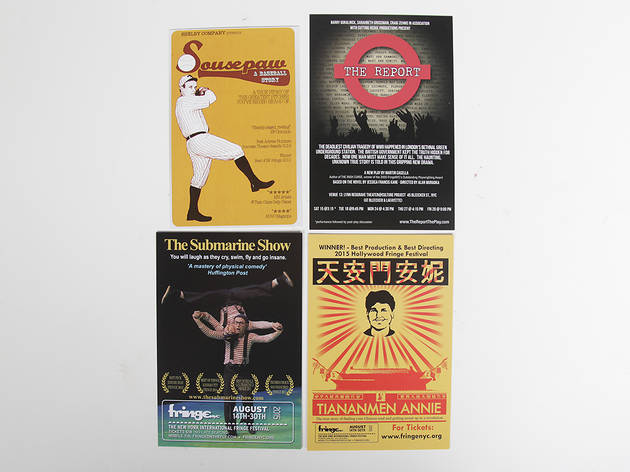 Since most Fringe productions are untested, the ones that have earned acclaim at other fringe festivals tend to highlight that fact on their cards. The 2015 fest, oddly, includes two shows that were hits of the 2011 San Francisco Fringe: Sousepaw, about an alcoholic baseball pitcher, and The Submarine Show, a night of physical comedy. Tiananmen Annie, about reporting from China in 1989, won prizes at the Hollywood Fringe this year. And although The Report, a play about a 1943 tube tragedy in London, is a new work, its postcard touts the playwright’s prizewinning 2005 Fringe play. 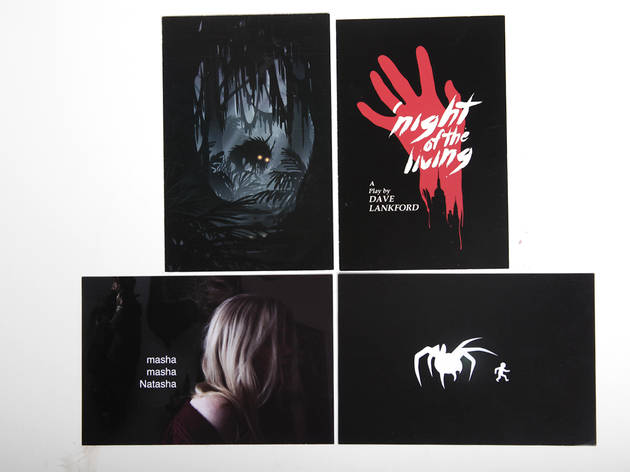 The Fringe is full of dark corners, as these four mysterious postcards illustrate. The one with the giant spider is for dungeon, which aims to blend video games, Pixar movies, Kabuki and fright flicks. The one with the bright-eyed jungle creature is Beware The Chupacabra!, a musical set in 1920s Mexico. masha masha Natasha features two teenage girls in a Wisconsin basement (which is scary enough already). And Night of the Living is about marital discord in the midst of a zombie attack, proving that no situation is too perilous to bicker through.