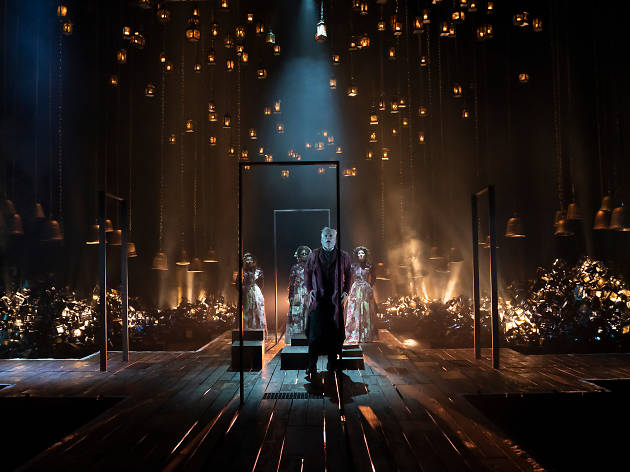 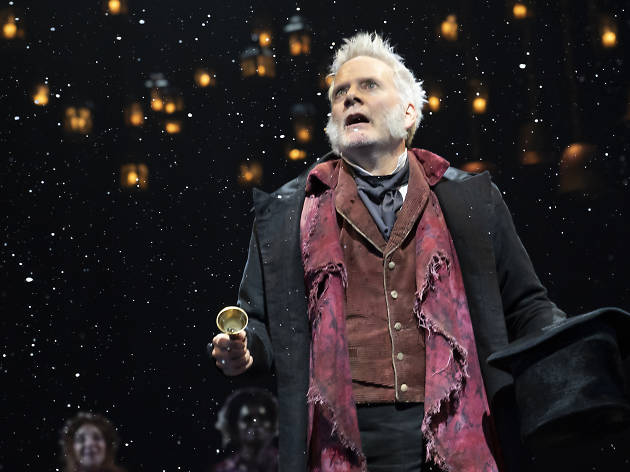 If you want to see a stage version of Charles Dickens’s holiday ghost story A Christmas Carol in New York this year, you are—like you are every year—in luck. As always, there are plenty to choose from: a candlelit reading at the Merchant's House Museum, an uptown update at the Classical Theatre of Harlem, a marionette show in the East Village. Or you could opt for the large, classy, rather gloomy production at the Lyceum, adapted by Jack Thorne and directed by Matthew Warchus. The look of the show is attractively dark. Dozens and dozens of lanterns hang on chains from the ceiling, with more of them piled in the two back corners of Rob Howell’s cross-shaped set; four skeletal doors tilt up from the floor to create the suggestion of walls; the moneylending office of the miserly Ebenezer Scrooge (Campbell Scott) consists of boxes that he neatly slots into the ground. A small group of live musicians is augmented by an ensemble that divvies up the narration, sings carols and, in the show’s prettiest touch, creates a chorus of handheld bells.

Thorne takes pains to flesh out characters from Scrooge’s past: his stingy and abusive father (Chris Hoch, who doubles as the ghost of Jacob Marley), his kindly sister (Rachel Prather), the woman he once loved (Sarah Hunt). Yet there’s not much payoff to this attempt at psychological depth; mostly it just adds length to the show, which would be more effective with a few trims and no intermission. And Warchus, perhaps wary of cliché, holds back on some of the story’s juiciest bits. Sheathed in a tatty red coat in lieu of the traditional nightshirt, Scott is a believable Scrooge—brusque, mean, heavily defended—but not an especially flavorful one. Marley’s arrival is so rushed it barely registers, and the two supernatural guides who follow him (Andrea Martin as the Ghost of Christmas Past, LaChanze as the Ghost of Christmas Present) lean to the drab side: appointed in bonnets and patchwork dresses, pushing empty prams.

At the Old Vic in London, where Warchus’s production premiered two years ago and has since become an annual staple, the show is staged in the round. Perhaps it is more effective in that form; at the Lyceum, even at what should be the joyous climax of the production—when the audience is corralled into helping assemble a massive Christmas feast—the festivity has a faint sense of effort. And just when our spirits have been suitably raised, Thorne’s script tamps them down again with a buzzkill of a coda. This A Christmas Carol has many lovely moments and atmosphere aplenty. What it lacks, just a little, is cheer.